Water lilies (Nymphaea) and their species

Water lilies, or nymphs (Nymphaea) – a genus of perennial herbaceous aquatic plants from the family of water lilies or nymphaeaceae (Nymphaeaceae), common in water bodies of the temperate and tropical zones of both hemispheres. Some flowering species are used in cultivation.

The genus includes about 50 species growing in flowing reservoirs with slowly flowing water. Their distribution area is extremely wide, it captures regions from the tropics of the equator to the forest-tundra belt of Scandinavia, Russia, Canada, some representatives can even winter in completely freezing reservoirs. 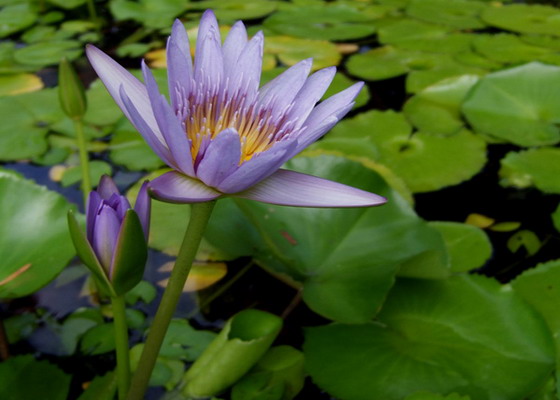 Water lily flower in the photo

As you can see in the photo, water lilies are aquatic plants in which the stems have turned into powerful rhizomes, either horizontally immersed in the bottom soil, or looking like a tuber. From tubers or nodes of rhizomes, numerous cord-like anchor roots extend downward, holding the nymphaeum in the ground, and petiolate leaves and peduncles grow upward. 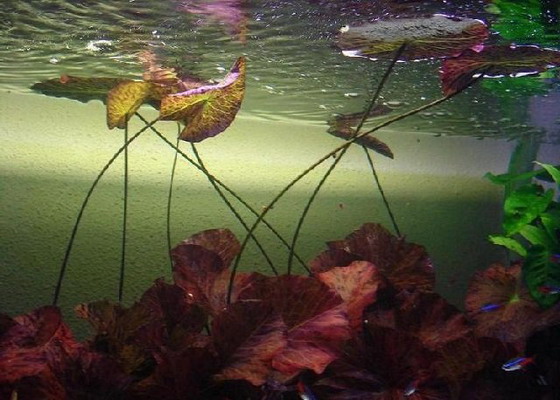 The underwater part of the water lily in the photo

Underwater leaves are very different in shape and structure from those floating on the surface; they are broadly lanceolate, membranous, rolled up with a cap, under which flower buds and developing surface leaves are hidden. The latter appear in the summer, emerge from the depths of the reservoir in the form of tubules on long petioles, only fully opening at the top. Leaf plates of winter-hardy water lilies are located directly on the water, tropical – rise above its surface. Their shape is usually heart-shaped, rounded or elliptical, with a pronounced basal notch, the surface is dense, leathery, has a wax coating, due to which it is not wetted by water. Sizes vary depending on the species and variety, the color can be green, reddish-burgundy or even variegated, which greatly contributes to the popularity of representatives of the genus as ornamental plants.

Elastic petioles allow the leaves to move freely under the influence of currents or wind. Their length depends on the depth of the reservoir and provides the most rational placement of leaf plates on its surface. With a decrease in the water level, when the plant is practically on land, the petioles become thick and short, no more than 20 cm long, and the leaves are bent up along the edge.

The flowering of water lilies (nymphs) in the northern regions usually begins in June, in the south – in May. The life span of one flower is about 4 days. It has an interesting feature of closing in the evening or morning hours, plunging into the water, in cloudy weather it may not appear on the surface at all. 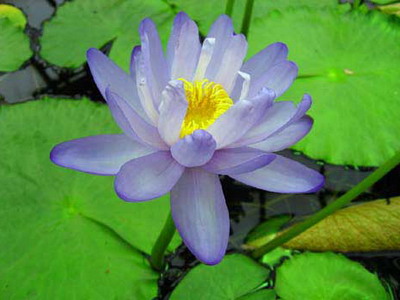 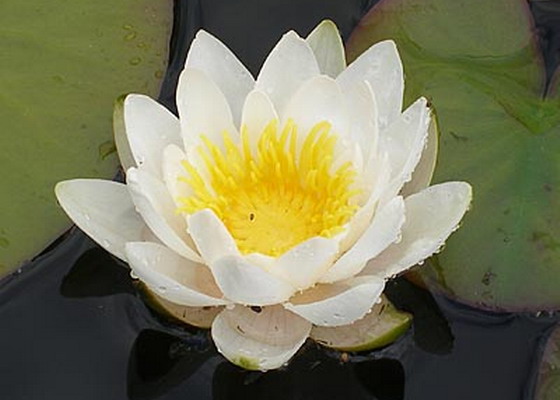 Water lily flower in the photo

Water lily flower – single, bisexual, regular symmetrical shape, with a long flexible pedicel and double perianth, in which 4-5 large green sepals and many smaller tiled petals. Its diameter varies depending on the species, in the largest specimens it reaches 30 cm, in miniature specimens it does not exceed 3 cm. The coloration is also very diverse. Most water lilies growing in the middle lane are white, but in the tropics there are species with pink, yellow, cream, purple, blue and blue petals. In the center of the flower bowl are several pistils and numerous large yellow or orange stamens, gradually turning into petals.

The popular name of the water lily is water lily, given to it not only for the shape and beauty of the flower, but also for the intense aroma that attracts numerous insects. Basically, the function of pollination is performed by beetles, climbing into the bed of a flower, they eat pollen, leaving part of it on their paws and then transferring it to another plant. Often, the beetles spend the night inside the bowl, which closes in the evening and goes under water, and rises to the surface again in the morning.

After pollination, the flower sinks to the bottom, where a berry-like multi-seeded leaflet fruit ripens. It contains up to 1.5 thousand small black seeds, which, after the destruction of the berries, float to the surface, since they are equipped with a mucous membrane and special spongy appendages-floats. For some time they stay on the water, and at this time they are carried by the current, or, since they look like caviar, they are eaten by birds and fish. The rest then sink to the bottom of the reservoir and germinate there.

Note that the seed method of reproduction is not the main one for water lilies, most of them reproduce by means of rhizomes, and some, like, for example, the African small-flowered water lily (N.micrantha), are even considered viviparous, young plants grow from a bulb that forms at the point of leaf attachment to the petiole.

All water lilies are amphibious plants, they can grow both in water and on land, even with a significant drying of the reservoir.

Most water lilies are tropical and subtropical cultures, they can exist only where the water temperature in the reservoir is not lower than 25 ° C.

There are fewer winter-hardy species, for example, only three grow in Russia: white, pure white and small water lilies. 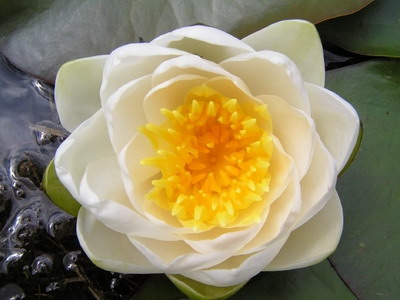 Despite the thermophilic nature of the nymphs, the beauty of these spectacular plants led to interest in them from flower growers all over the world, and in the middle of the 19th century, work began on breeding varieties adapted to existence in open waters of the temperate zone. For 30 years, more than 50 hybrids of water lilies have been created, water lilies have appeared in the decorative ponds of Versailles and the greenhouses of the Queen of England. The main merit in this belongs to the French botanist Joseph Bory Latour-Marliac, who bred the first hybrid in 1877, and subsequently created a number of wonderful ornamental varieties, still widely grown all over the world. After his death in 1911, work on the hybridization of nymphs practically ceased, and only recently new cultivars of American selection began to appear on the market.

In order to take into account the specific requirements of plants in their decorative breeding, it is customary to divide all types of water lilies into groups in accordance with the structure of the root system. According to this classification, rhizomatous, tuberous, conditionally stolon and conditionally rhizomatous water lilies are distinguished.

The rhizomatous species that shoot along the entire length of a powerfully developed rhizome include water lilies: 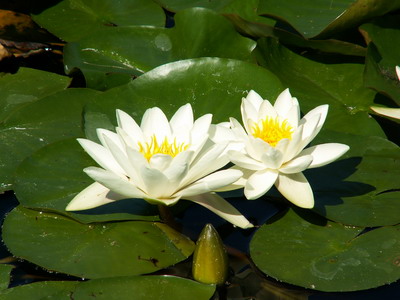 Snow-white or pure white (N. candida) , common in central Russia, very similar to the previous species, slightly different in the shape of the leaves and slightly smaller (up to 12 cm) in the size of the flowers, which have a more intense aroma. 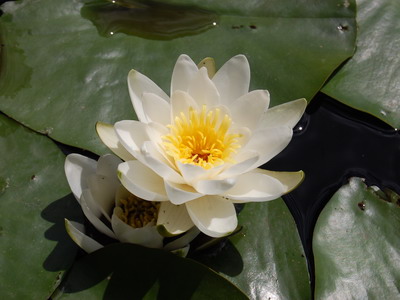 Small or tetrahedral (N. tetragona) , found in the northern reservoirs of the middle zone and in Siberia. Smaller, with leaves up to 8 cm in size and flowers up to 5 cm in diameter. 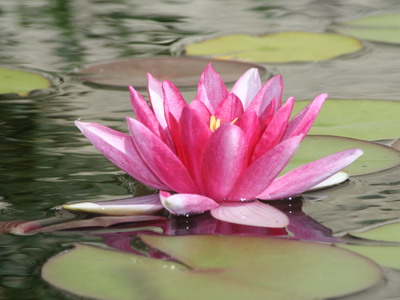 Tuberous (N. tuberosa) , large, with white flowers and horizontal rhizomes, on which tuberous growths form. Cultivated in water bodies with a depth of at least 1 m, there is a pink form with red stamens N. Tuberose Rosea and a large snow-white N. Tuberose Richardsonii, both are suitable only for a large reservoir or lake. 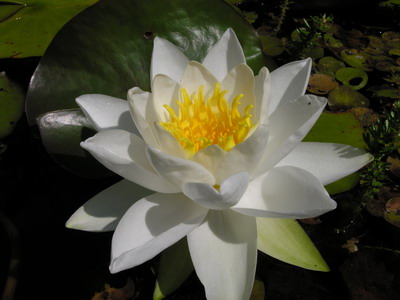 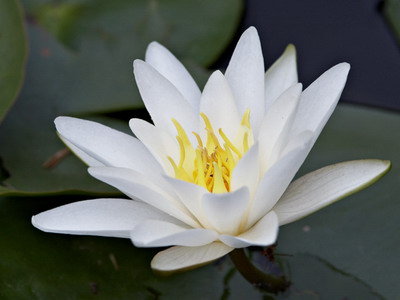 Rhizome species are cold-resistant, can winter in open water. On their basis, numerous hybrids have been created, suitable for a temperate climate, which are usually divided by size: into small and large.

Among the small popular: 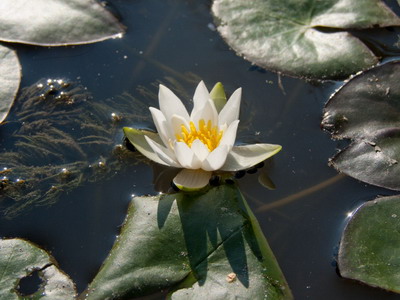 Orange (Sioux) with pointed petals, and the more compact Aurora, both flowers first yellow, then orange-pink, and finally red; 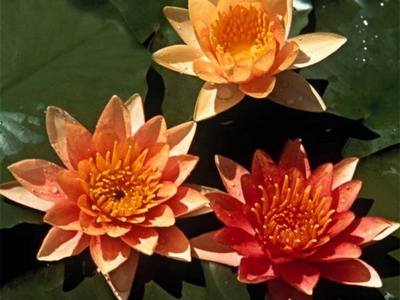 Yellow water lilies (Sunrise) , one of the best varieties, with flowers up to 20 cm in diameter, and Australian Moorei with less abundant flowering; 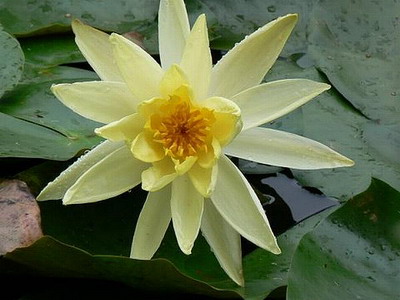 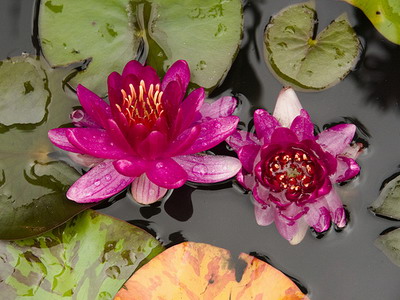 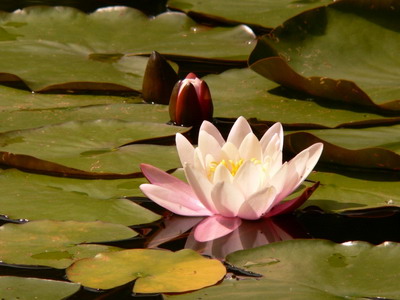 Large water lilies differ in the size of flowers (at least 15 cm), and leaves, which can occupy an area of up to 2 m 2 . This is:

White (Gladstoniana) , a flower up to 30 cm in diameter, for a lake or a large pond; 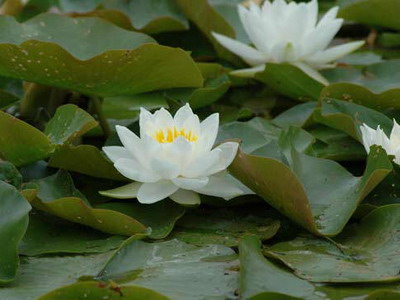 Yellow (Marliacea Chromatella) , or “Golden Cup” water lily, as it is called in England, is a reliable and profusely flowering variety with bright large (up to 18 cm) flowers, 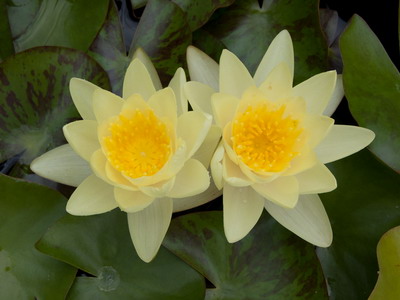 Red (Escarboucle) , the most beautiful of red water lilies, up to 30 cm in diameter, blooming reliably. 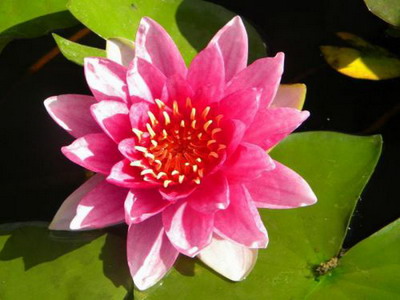 Species belonging to the groups of tuberous, conditionally rhizomatous and conditionally stolon water lilies do not hibernate in temperate latitudes; in the cold period they must be removed from the ground.

Tuberous varieties at the points of formation of young plants form tubers.

These are numerous heat-loving species of various colors: 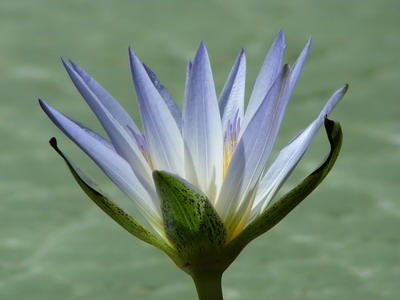 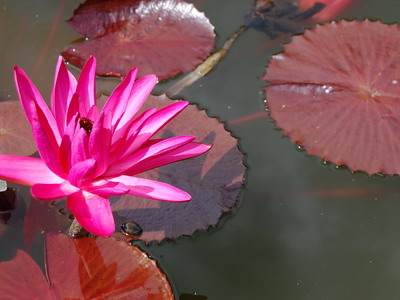 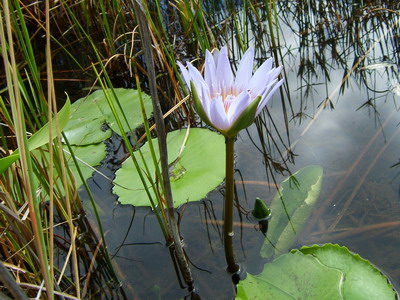 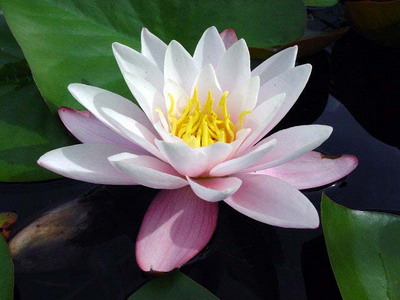 Based on them, a number of hybrids have been created: 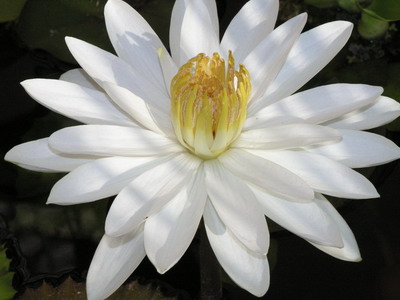 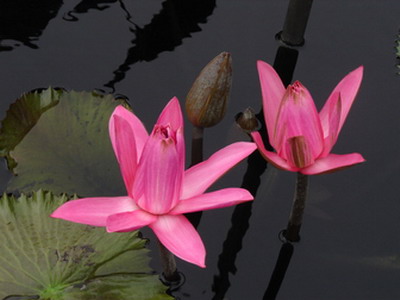 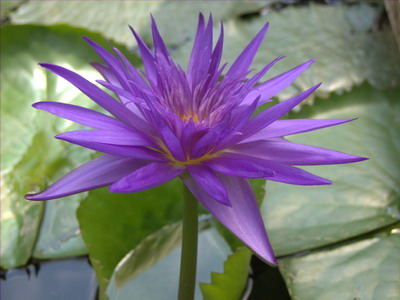 The representative of the conditionally rhizome group is the small-flowered water lily (N. micrantha) , which, like all plants from the group, reproduces in nature only by seeds. 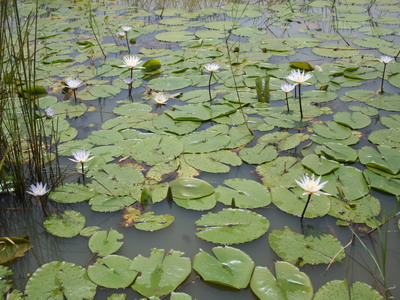 There are several heat-loving blue (Daubeniana Hort) and purple (King of the Blues) hybrids that reproduce vegetatively. 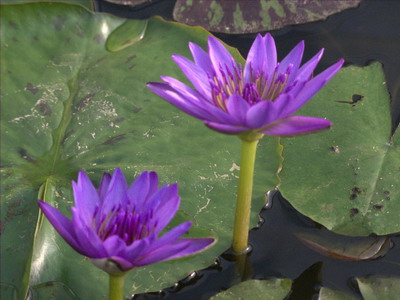 The last, conditionally stolon group, includes tropical plants whose maternal rhizomes form descending shoots. New tubers form at their ends, in spring they produce ascending stolons, from which new rhizomes are formed, and then leaves and buds. 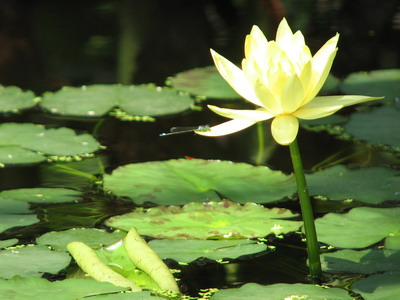 In conclusion, we note that the largest flowering plant in the world is the water lily. Victoria amazonic or Victoria regia (Victoria amazonica or Victoria regia) , a separate genus of the water lily family, a giant water flower, the size of the leaves of which reaches 3 m, is found in the shallow waters of the Amazon, where the depth does not exceed 2 m. Its large, up to 35 cm in diameter, water lilies bloom once a year, coming to the surface only at night. Flowering lasts two days, while the color of the petals is constantly changing, they become white, then pink, and finally red or even raspberry-purple. This one of the rarest plants on the planet is currently widely cultivated in greenhouses. 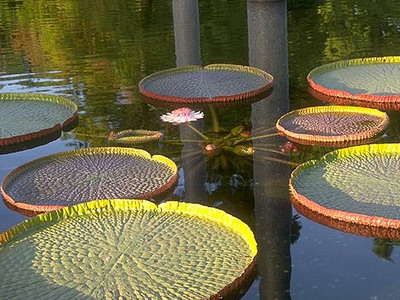 Antemis (navel): characteristics of the best species and varieties

For most flower growers, growing plants is not only a useful...
Read more