One of the advantages of succulent , contributing to the growth of its popularity, is the ease of care and reproduction. Zamioculcas at home is propagated by any vegetative parts: segments of rhizomes, leaf cuttings, individual segments of a complex leaf. This process is not complicated, but long, a new tuber is formed slowly, so young leaves have to wait for several months, sometimes up to six months. Growing from seeds in our latitudes is not used, since it is impossible to get them, and in closed ground conditions, Zamioculcas rarely blooms, and never sets seeds.

Propagation of Zamioculcas by cuttings

The easiest way to propagate a flower is by dividing the rhizomes during transplantation. To do this, on the second day after watering, an adult plant is taken out of the container, the rhizome is freed from the soil, carefully examined, sluggish, soft, rot-damaged areas, segments with stumps from old leaves are removed, and carefully cut into several divisions so that each remains at least one growing point (bud or leaf). 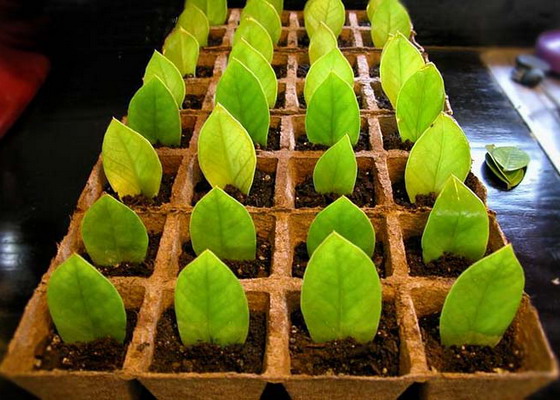 Sheet propagation of Zamioculcas in the photo

The sections are treated with crushed activated carbon, dried for 2 days, after which the rhizomes are planted in a permanent place in a container with a moist substrate. Water for the first time not earlier than in a week, in the future – as the earth dries up. Once every 10-14 days, preparations that stimulate root formation can be added to the water for irrigation. The larger the separated part, the sooner it will develop into a full-fledged flower.

In this way, large specimens that have reached the age of 8-10 years are usually rejuvenated, since by this time they become less decorative: the stems are exposed, numerous stumps from fallen leaves prevent new shoots from growing. However, more often in indoor floriculture, reproduction by cuttings or a separate leaf plate, which is less traumatic for Zamioculcas, is used.

As a cutting, a complex leaf is used as a whole, together with the petiole. At its base, as the lower leaf blades mature and fall off, a swollen seal is formed – a bud, from which, after planting in the ground, a tuber develops over time. For reproduction, a leaf is taken that has such a bud, it is cut off, dried for several days, the cut is treated with crushed coal, and planted in light soil, consisting of equal parts of sand and leaf earth or peat. It is better to sterilize the substrate before planting. The kidney is buried to the base of the leaf, usually about 1 cm.

A pot with a cutting is placed in a micro-parnichok, for which it is covered with polyethylene or a glass jar. They are kept at a temperature of 25 to 27 ° C and bright diffused lighting, artificial, aired daily, sprayed every 2 weeks. To stimulate root formation, soil heating can be used, as well as phytohormones (kornevin, zircon, heteroauxin).

The most gentle for the mother plant, but also the longest way to obtain young specimens of zamiokulkas is leaf propagation. In this case, leaf plates from the lower part of the flower are used, they, like cuttings, are cut, dried, treated with charcoal and buried in moist soil by about a third of the length (about 1.5 cm). Further care is the same as when rooting cuttings. With these methods of reproduction, the rule also applies: the larger the part takes root, the larger the rhizome is formed, and the faster you can get a full-fledged plant.

Below are photos of zamiokulkas, the reproduction of which is carried out by cuttings and leaf plates. 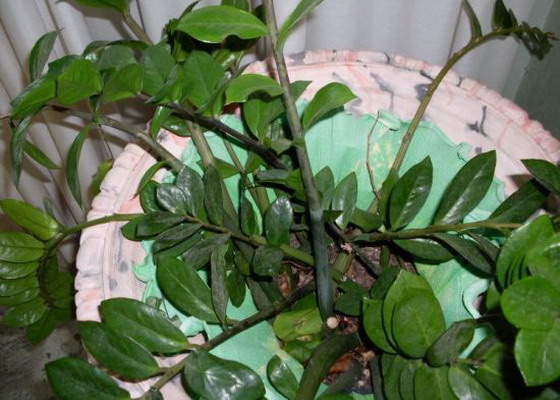 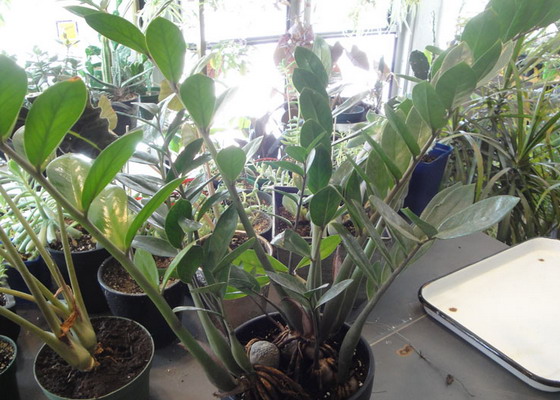 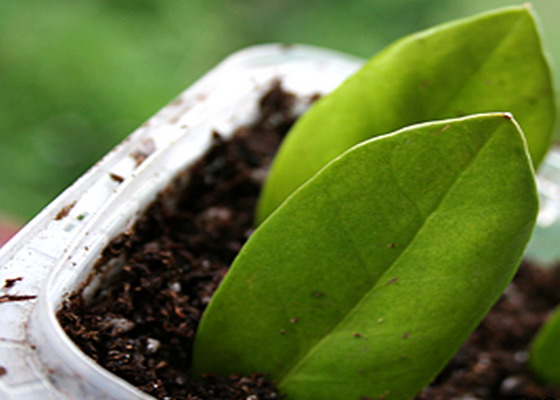 How does zamiokulkas bloom and does it bloom at all?

How to transplant zamiokulkas into a pot or flowerpot after purchase?

Pests and diseases of zamiokulkas: why does zamiokulkas grow poorly, wither?

Why do zamiokulkas leaves turn yellow and what to do?