Lakfiol or cheiranthus ( Cheiranthus ) is a herbaceous annual or perennial plant of the Cruciferous family, common in southern Greece and the islands of the Aegean Sea. The people call this culture “jaundice” for the bright yellow color of the unusual shape of the buds. Lakfiol is one of the most common plants on the site. It is valued not only for beautiful flowers, but also for the very pleasant aroma emanating from them during flowering. 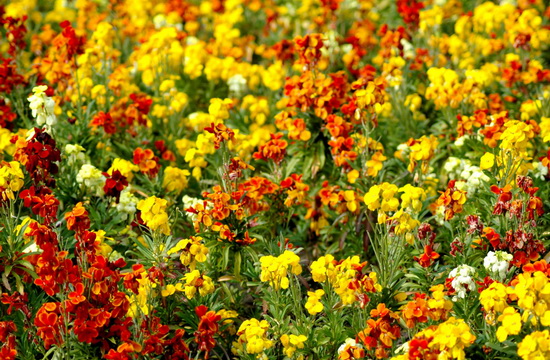 Heiranthus – a bush consisting of thin, strongly or slightly branched fleecy stems, reaching 40 – 100 cm in height. The leaf blades are large, smooth, opposite, oval, elongated, with teeth along the edge, bluish-green in color.

When describing lacfioli (cheiranthus), it is worth noting that the flowers of the plant are four-petalled, up to 2.5 cm in diameter, painted in yellow tones. Some varieties have pink, burgundy and terracotta buds. The flowers are enclosed in lush racemose inflorescences. Some varieties of cheiranthus bloom from mid to late spring, while others bloom in late summer.

After flowering, instead of inflorescences, elongated tetrahedral fruits appear on the plant – pods with small brown seeds inside. Germination of sowing material of Lacfioli is 4 years.

Among the many types of cheiranthus in ornamental gardening, several of the most attractive and unpretentious to growing conditions are distinguished. Their characteristics are given below.

Cheiranthus alpinus. It is a sprawling shrub about 40 cm high. It consists of thin shoots, completely covered with dark green dense oval foliage. The flowers are simple, four-petalled, golden yellow. 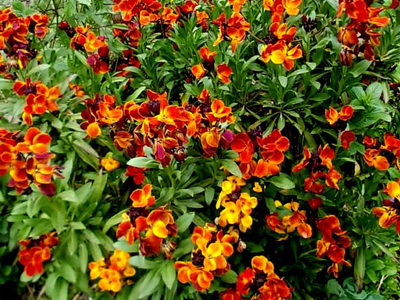 Cheiranthus cheiri. A lush bush 60 cm high. The shoots are covered with lanceolate dense shiny rich green leaves. Flowers can be brown, terracotta, muted red, orange, bright yellow. The variety of shades of this type allows you to create colorful colorful compositions with it in the flower garden. 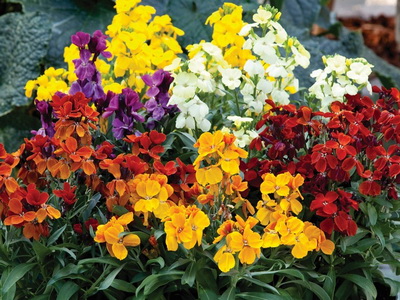 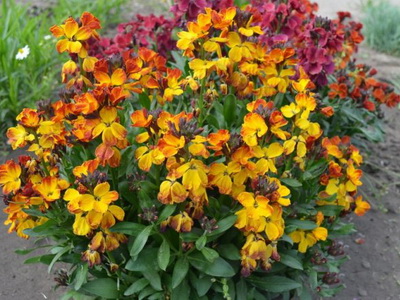 One of the most common varieties of lacfioli in Russia, on the basis of which a large number of varieties were bred by breeders. Among them the most interesting are: 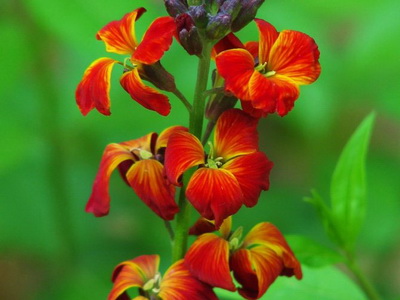 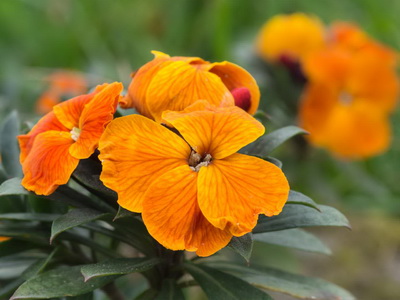 Bedder “- a plant with simple four-petal flowers of a coral, intense yellow, red hue.«Zwerg “- a spectacular variety that has tricolor buds. 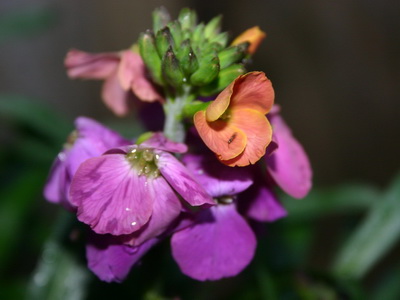 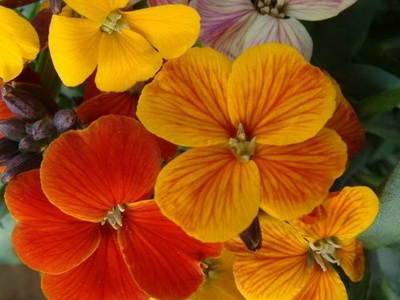 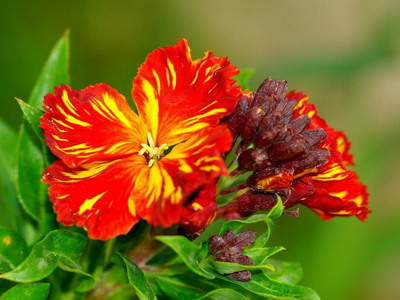 “Fire King” – a plant with inflorescences of dark red and terracotta colors. 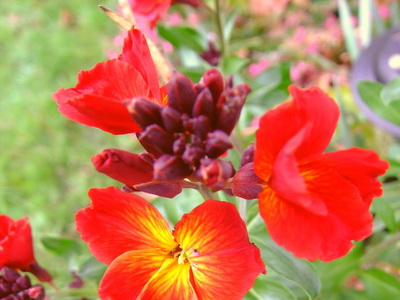 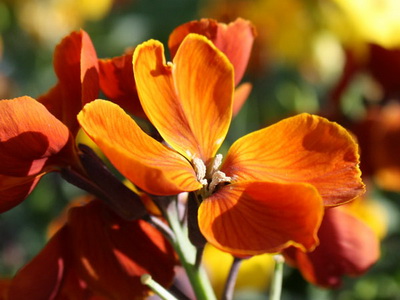 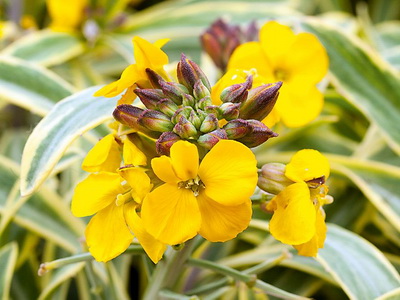 Cultivation of Lacfioli (Heiranthus) is carried out using seeds, which are planted in containers for seedlings, or immediately placed in open ground. For planting seedlings, medium-sized containers are taken, a light nutrient mixture is poured into them, seeds are evenly scattered on top, which are previously mixed with sand for ease of sowing.

The substrate is moistened with a spray bottle. Boxes with crops are covered with a transparent film, cleaned in a room with diffused light and a temperature of 16-19 degrees. Care of crops should include daily ventilation and soil moisture. After the sprouts hatch, the shelter must be removed.

After the formation of two leaf plates in plants, they dive separately into small pots. Transplantation of seedlings to a permanent place is carried out at the end of spring, when warm fine days are established.

For planting, shallow holes are made, the size of which should correspond to the size of the root system. Seedlings are placed in holes and covered with earth. Place the plant so that the root neck is not buried, but is at ground level. The distance between seedlings should be about 30 cm.

Seed material can be immediately planted on the site, having previously prepared the ridge. This work is carried out in the second half of May. The soil for crops is dug up, enriched with fertilizers, leveled, seeds are scattered on top. After that, the ridge is again leveled with a rake, closing up the seed, and finally watered from a watering can.

In areas with a mild climate, heiranthus seeds are planted before winter. The soil for growing this crop should be saturated with nutrients, well breathable, slightly acidic. 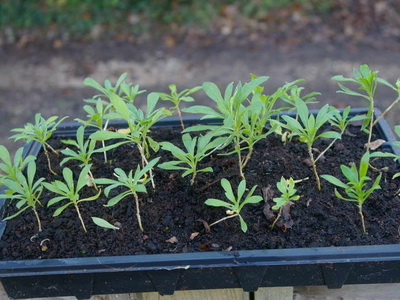 When choosing a site for lacfioli, one should be guided by the fact that the plant successfully develops in sun-drenched, wind-sheltered and drafty places in the garden. The proximity of groundwater is unacceptable, so planting this crop in the lowlands is categorically not recommended.

The gardener needs to continue caring for lacfioli (heiranthus) seedlings after planting in open ground, since the systematic implementation of the necessary procedures contributes to the rapid growth and development of plants.

Watering. It is necessary to irrigate the cheirantus bushes moderately, trying to prevent stagnation of moisture in the soil, which threatens to rot the root system of this flower. Before the next watering, make sure that the top layer of the earth is dry enough. It is worth remembering that this crop will more easily endure a prolonged drought than excessive watering.

Topdressing. It is necessary to apply fertilizer in order for the bush to actively grow foliage and form buds. Thanks to top dressing, the decorative effect of lacfioli will manifest itself to the maximum. The first time fertilizer is applied during planting seedlings on the site. The second time the plants are fed during the laying of buds. For this, mineral complexes and organic matter are used.

Wintering. Perennial species and varieties are prepared for the cold season by cutting off their upper part, leaving about 10 cm from the shoots, then covered with a layer of mulch. It is important to bear in mind that this crop can withstand temperatures down to -18 degrees, with stronger frosts it dies. For this reason, perennials are grown mainly in warm regions.

Other care. For the splendor of the bush, periodically pinch the tops of the shoots. For new bud formation, faded inflorescences are removed in a timely manner. After irrigating the bushes, the soil around is loosened and cleared of weeds. 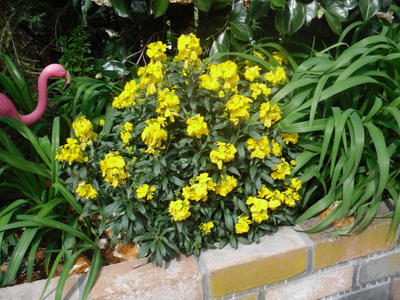 Low-growing varieties are planted along the edges of garden paths, grown in pots. With the help of these flowers decorate balconies, terraces, verandas, loggias, gazebos in the garden. The best companions for this culture will be forget-me-nots, soapwort, daffodils, tulips, garden daisies, daisies, marigolds, zinnias, violets, iberis, poppies.