Brown-headed Lithops is endemic to Namibia. Lithops cactus grows in deserts on infertile substrates: breccias, quartzites, gneisses, slates and thin layers of limestone. In this article, we will tell you about the types of lithops, its reproduction, meaning and application, and also provide the opportunity to see photos of lithops in nature and culture.

About 30 subpopulations are known, which are found in an area of 22 km2.

Brown-headed lithops is a succulent herbaceous perennial up to 3.5 cm high. The body is heart-shaped, the root system is weak, there is no stem. The only pair of leaves is fused into a wide pillow flattened from above, up to 2.5 cm wide. In an adult lithops cactus, it is divided in half by a narrow slit. The gray-yellow top of the leaf is slightly wrinkled, without clearly visible “islands” and “windows”. Like other lithops, it is dotted with round dots – brown, dark gray or purple.

A peduncle appears from the gap between the leaves with a single lithops flower – correct, bisexual. Corolla bright yellow, rarely white. Tubular with a wide limb, dissected into long narrow lobes, the corolla of lithops flowers reaches 3.5 cm in diameter. The fruit is a five-celled capsule with small yellowish-brown seeds.

Reproduction is seed and vegetative by young shoots.

Throughout the dry season, which lasts in Namibia from December to April, the lithops plant is dormant. In May, the rainy season begins, the cactus awakens and begins to grow in size, storing water in young leaves. In September – October, it stops growing and throws out flowers that are pollinated by insects. Soon the fruits are tied, but even having dispersed the seeds ripened at the beginning of the next spring, they remain in place and fall off only at the beginning of the next flowering.

Lithops, or, as they are also called, living stones, have gained immense popularity among succulent lovers around the world. These bizarre plants are slow growing, require little to no watering, have no needles, and take up less room on the windowsill than cacti.

Types of lithops and their photos

There are several types of lithops, photos of which you can see on this page. All of them are of different colors.

The most popular form is Aurea , a delicate golden green with gray-green dark dots and white flowers.

Lithops of Dorothea (L. dorotheae), green (L. viridis), Willet (L. villetii), false truncated (L. pseudotruncatella) and about a dozen more species are also common in the collections. Many of them have become rare in nature not without human help. 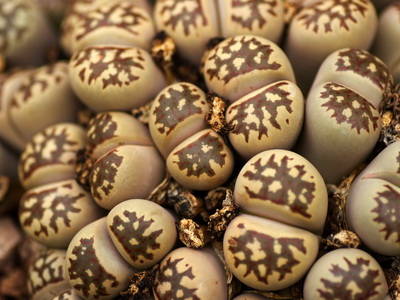 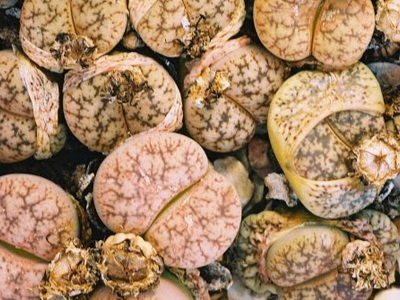 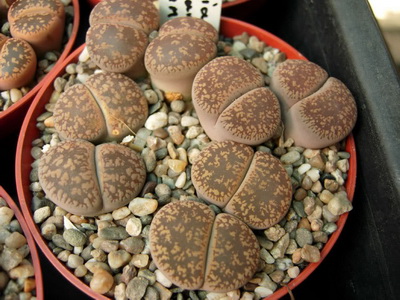 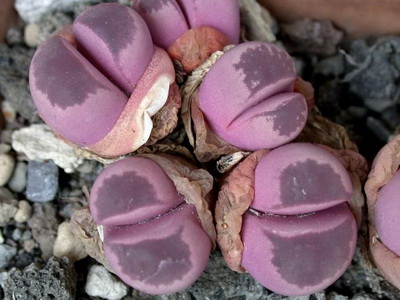 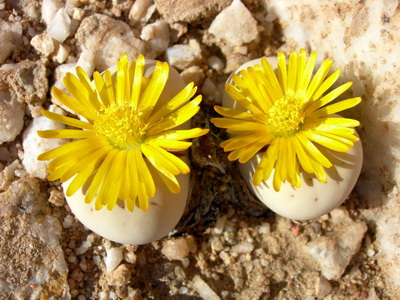 The plant body is adapted to life in the harsh and arid conditions of the African desert. 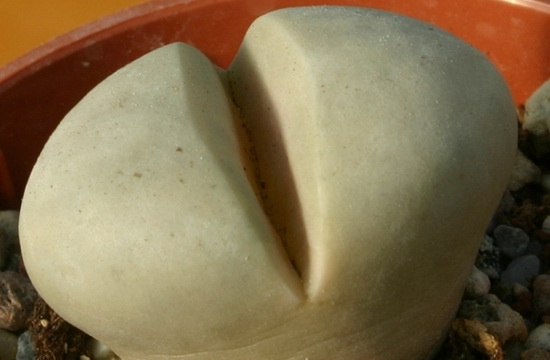 As you can see in the photo, lithops has a body completely covered with a thick cuticle that prevents water from evaporating.

Photosynthetic tissues are hidden in the depths of the leaf, and only dark transparent areas at the top, the so-called windows, allow sunlight to pass through to them. Thus, the plant is protected from sunburn.

Each year, the lithops grows a pair of new leaves from a bud laid at the base. As the young leaves grow in size, the old ones peel off like a stocking.

The main threat to brown-headed lithops is poachers who collect seeds and dig up plants for sale. The number of some populations is decreasing, but it is too early to talk about the threat of extinction.