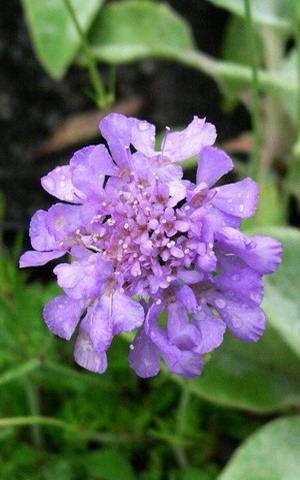 Description: These are hardy perennial and annual flowers mostly used for cutting or ornamental purposes. They belong to the tufted family. This name was derived from the word scabies – scabies, because it was previously assumed that the plant has healing properties , with which skin diseases were treated. Scabiosa reaches a height of 60-90 cm. Despite the fact that there are a large number of species in this genus, very few of them have been found in the wild, since most were bred artificially.

Leaf ornament: present. The leaves of the flower are lanceolate and serrated, up to 10 cm long. Most of them grow at the base. 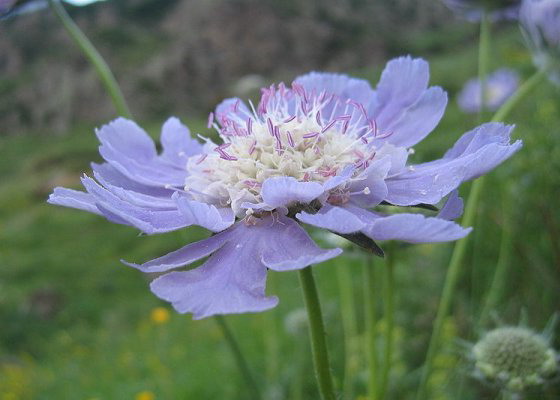 Scabiosa caucasian flowers in the photo in a country garden

Flowering: fragrant 5-7 cm flowers are domed with stamens that look like small pincushions. Their hue can be purple, pink, orange-pink, or blue-violet.

Fertilizers: scabiosa, which is grown in pots, needs to be fertilized with a developed root system. Water soluble fertilizers should be used once a week.

Reproduction: carried out by planting seeds. They need to be planted indoors 8-10 weeks before transplanting into the garden. The air temperature should be between 21-24°C. The soil should be light and sandy. If the soil in the garden is warm, then, as a rule, seedlings germinate on their own in the place where scabioses are grown. Also in the spring, plants can be reproduced by division. Remove the formed groups of flowers and divide them so that the sprouts have two or three shoots with roots. Old scabioses scattered around the garden can be reproduced in the same way.

Optional: dwarf scabiosa is an ideal flower for growing along sidewalks. Due to its graceful beauty, this variety is used for cutting. Animals that can harm the plant, such as cattle, try to beware of it, while butterflies, on the contrary, often fly to it.

In the genus, this is the most common species, which has a large number of varieties. It is often used for decoration in borders in combination with other flowering plants. Scabiosa purpurea originally had a rich crimson hue of flowers, but in the process of cultivation different tones of burgundy, red-yellow and white shades appeared. There are both terry and non-terry varieties. Most gardeners prefer double varieties, while non-double varieties are mainly used for cutting. 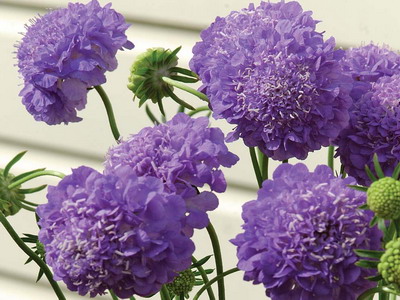 These flowers, referred to in Portugal as “Saudade” are used for funeral wreaths. To grow groups of these plants in borders with the most spectacular flowering, they should be planted with other annuals in the same area in May or later, in which case they will bloom the next year. If you plant seeds earlier, they will bloom in the same year, and flowering will not be as spectacular. Most gardeners believe that scabioses are biennial plants , but, as practice shows, they often grow well for only one year. By planting seeds in late March, the plants will begin to bloom profusely by the end of summer.

This flower has a fairly long flowering period. In spring, dense clusters of flowers appear on 60-75 cm stems, each of which is 7 cm in diameter, and if wilted buds are regularly trimmed, then flowering will last until early autumn. 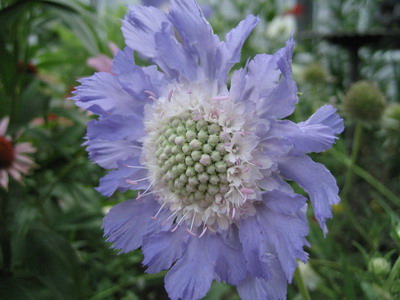 Scabiosa caucasus can come in different shades of colors, such as mauve, purple, or white in combination with its standard light blue color. Propagated by division and planting seeds.

Attractive, 45 to 60 cm tall with pale blue flowers and silvery white leaves. Looks great when grown in a rock garden. 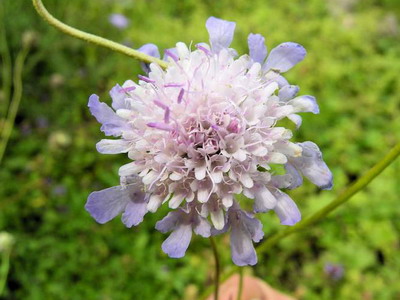 This species is also great for growing in a rock garden or in borders. It forms graceful little clusters of densely pubescent leaves. The plant can grow in poor soils. The flowers are creamy yellow, appear on long stems and bloom between July and August. Reproduction is carried out by division. 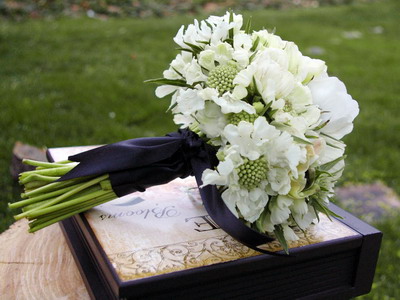 Shiverekia (Schivereckia) – a flower from the Red Book