The ostrich (lat. Matteuccia) is a fern from the Onokleaceae family. The plant is native to North America, and it is also common in many countries with a temperate climate. This culture occupies a worthy place in the garden, valued for its openwork bright foliage and the ability to blend harmoniously with other ornamental plantings. 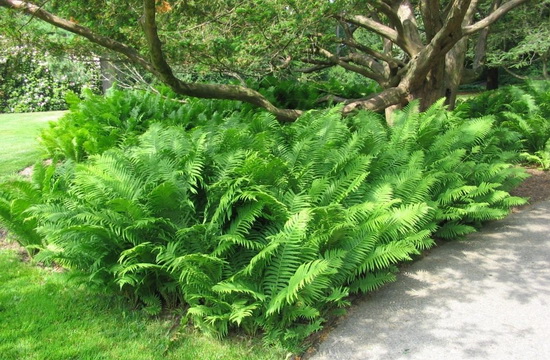 The ostrich reaches 200 cm in height. It has long large leaves resembling ostrich. Rhizome creeping, vertical, well developed. Numerous thread-like roots depart from the central root. Leaves – pinnate-fern fronds, collected in a sprawling basal rosette. Their color is emerald green. In the central part of the leaf rosette are small leaves with brown spores. Young leaves are tightly rolled, straightening out with time. Their length is 100 – 150 cm, width – 30 – 40 cm. The size of spore-bearing leaves is much smaller.

In autumn, fronds die off, spore-bearing leaf blades persist throughout the winter months. In the spring they shed their spores. Thus, natural self-seeding occurs. Already in the first days of May, young growth can be seen near the mother bush.

The following are photos and descriptions of the ostrich fern of various species.

Common ostrich (Matteuccia struthiopteris). A perennial fern 250 cm high. With a lack of moisture, it grows up to 40 cm. It has a powerful, rapidly developing rhizome, the annual growth of which is 20–30 cm. The fronds are pinnately dissected, bright green, on short petioles. This species is highly resistant to low temperatures. 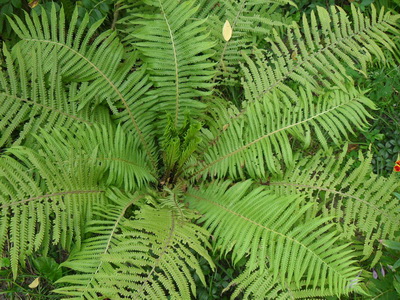 Matteuccia orientalis. Reaches up to 70 – 150 cm in height and up to 50 cm in width. Vayi are collected in dense bunches. The leaves are openwork, consist of many thin segments, due to which they look elegant and airy. This variety is one of the most beautiful among other ferns, but has a pretentious character in terms of growing conditions. 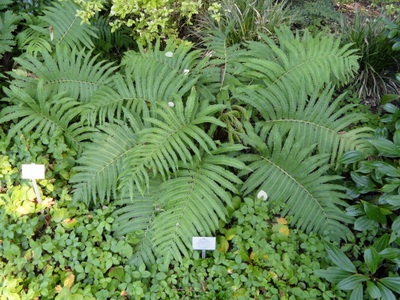 Matteuccia intermedia. Bush 70 – 100 cm high. Forms large triangular pinnately dissected fronds, collected in a dense rosette. It is grown in regions with a warm climate, because it does not withstand frost. 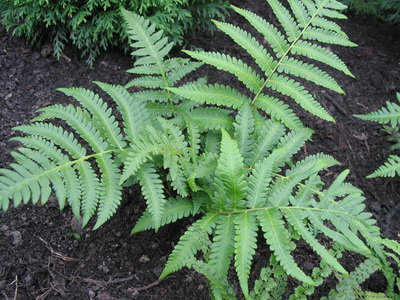 This culture is propagated by spores that develop on fronds. It can also be easily propagated by dividing the rhizome into parts. Both methods allow you to get new specimens of the ostrich in a short time and without much difficulty. It is enough to follow the recommendations below. 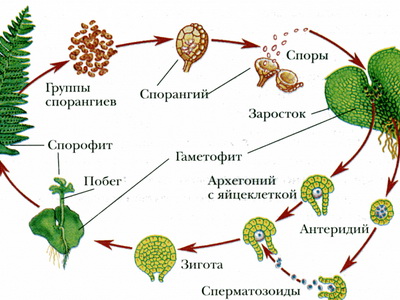 Disputes. To collect planting material in autumn, a darkened, almost blackened vayu is cut off, spread on a surface covered with paper. After a few days, the frond will dry out completely and the seeds will spill out of it. Seed material is stored in a paper or cloth bag. Seeds of an ostrich with proper storage remain viable for 5-6 years. 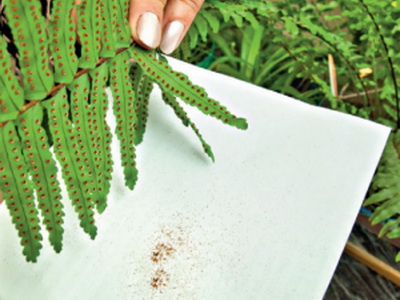 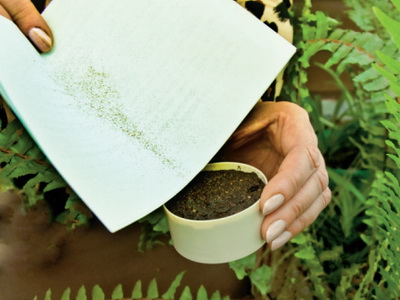 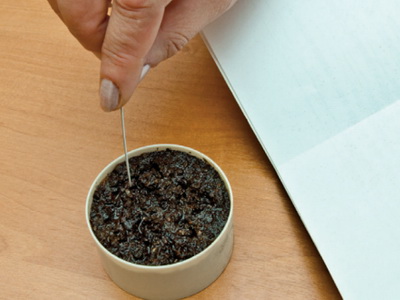 Sowing seeds in the substrate is carried out at the end of autumn or with the onset of winter. For germination, take containers with lids, fill them with a loose soil mixture of leafy soil, peat, sand and a small amount of sphagnum, without adding 2–3 cm to the top of the container. The soil is watered, the spores are evenly distributed over its surface, without falling asleep with earth. Then the containers are covered with a lid and cleaned in a warm place with bright sunlight. 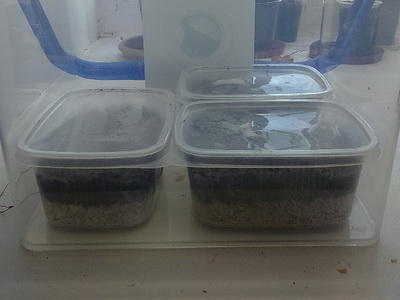 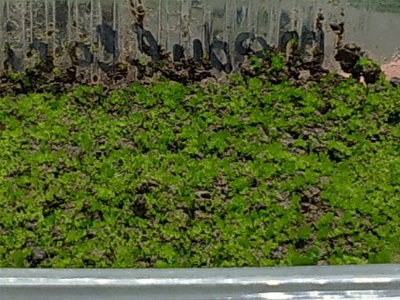 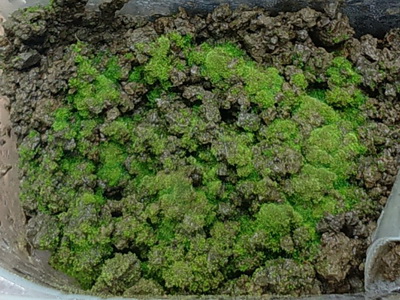 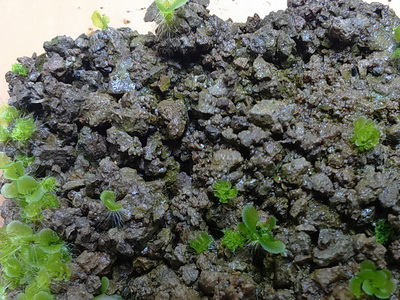 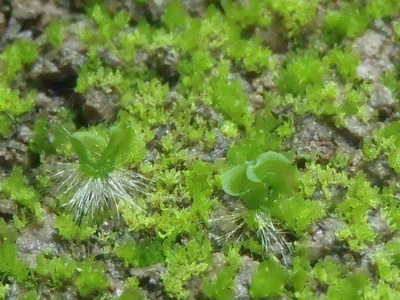 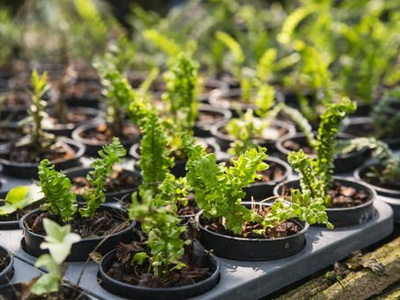 Sprouts can appear both in a couple of weeks and in a month. During the development of plants, it is important to properly care for them, as they are quite fragile and vulnerable. Care should consist in airing crops, removing condensate on the lid, moistening the soil (preferably with a spray gun).

The grown landings dive, leaving the strongest specimens. Before removing the lid, the sprouts are hardened, leaving open for a few minutes a day. Finally removed after the sprouts are properly strengthened.

If the cover is removed prematurely, fragile plants may die from a sudden change in conditions. Sprouts develop in containers for 2 years, after which they are transplanted to the site.

The division of the bush. This work is carried out in early spring or late summer during sporulation. 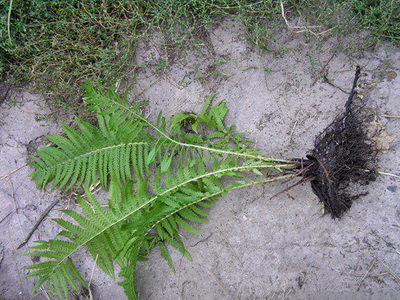 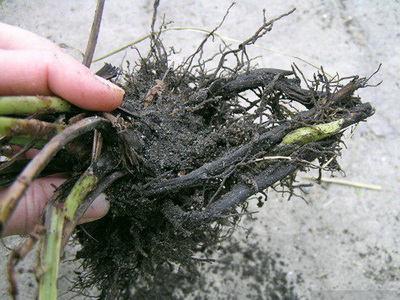 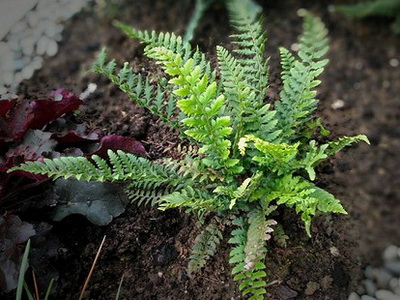 To do this, they choose an overgrown bush, dig it out of the ground and divide it into parts so that each of them has a rhizome and a process with two renewal buds. Delenki are planted at a distance of 60 – 80 cm both from each other and from other crops, since ostriches grow well and begin to oppress neighboring plants. 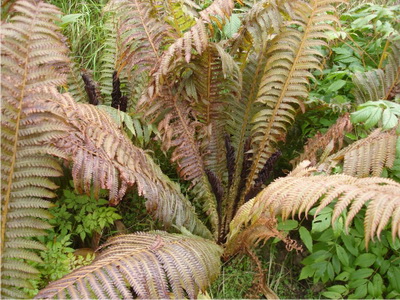 Among the pests attacking the ostrich, a thin moth butterfly is distinguished. The insect lays larvae on the leaves that eat greens. Having found the larvae, they should be collected and eliminated.

Additional activities. When breeding an ostrich, the gardener will need to periodically carry out a number of additional works:

Application in the garden

This culture is used in the garden to decorate shaded areas, create flower beds in places where sun-loving plants cannot grow. The fern is planted in alpine slides, rockeries, mixborders. Lush bright greens serve as a backdrop for low variegated flowers. 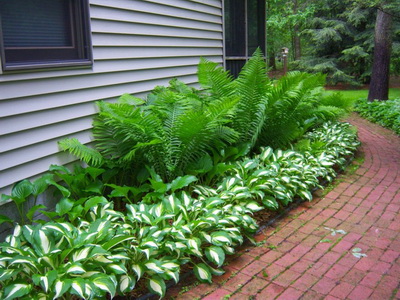 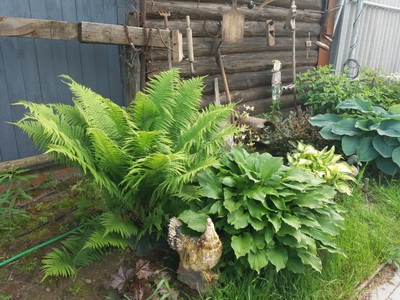 With the help of an ostrich, they decorate places around artificial reservoirs, as well as trunks of garden trees. Suitable partners for him will be moisture-loving flowering plants that can do without bright sunlight. These are daylily, lobelia, loosestrife and others. The fern is also planted as a tapeworm in a large shady area.

See what an ostrich looks like in a garden landscape design: 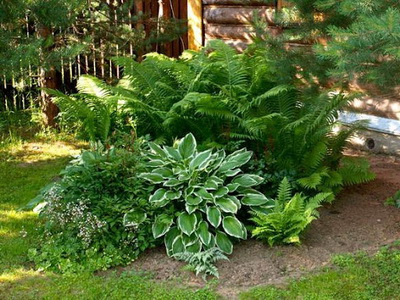 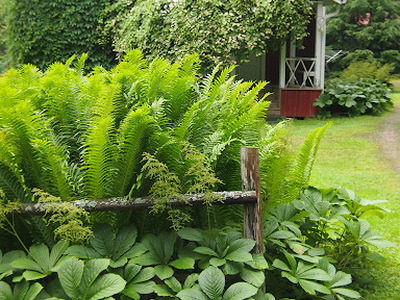 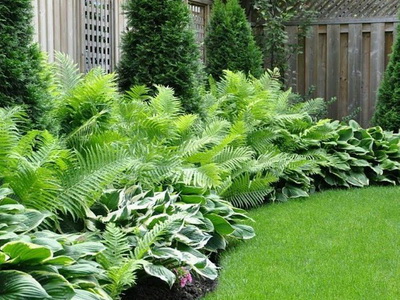 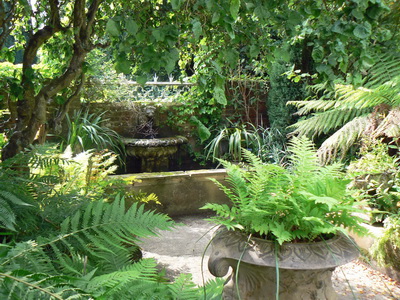 Lush rich green leaves of this fern are used to make bouquets. Bright flower buds look spectacular against their background.