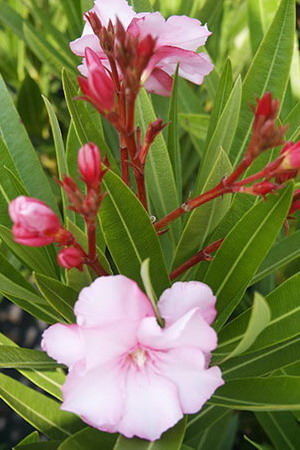 Homeland of the oleander: South Asia, the Mediterranean.

Leaf ornament: present. The foliage is dark green, leathery, lanceolate. On average, the leaves are about 15 cm long and 2 cm wide.

Description: It is an evergreen flowering shrub. Belongs to the kutrov family. In the wild was found in the East. In height, oleander can reach 2 to 4 m, and the distribution in the garden is sometimes up to 6 m. They are excellent for cultivation in gardens in the far south. The shrub is not hardy to cold, so frost seriously damages the flower. All parts of the plant are poisonous and, if ingested, can cause irreparable harm. Among all species, the most poisonous is the white oleander. 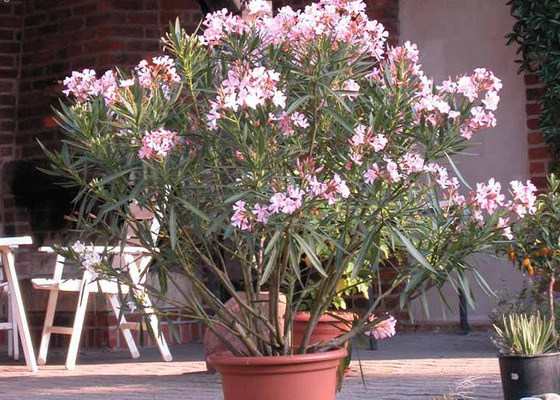 Peduncle oleander at home in the photo

Flowering: present. The plant produces clusters with flowers at the end of the branches. The flowering period is summer. The flowers have a tubular base but open at the top. They can be non-double, semi-double or terry, and their color is red, apricot, pink or white. Usually flowering begins from March to May and continues until autumn. The exception is the common oleander, which often blooms longer than other species.

Care: Most species, especially indoor oleander, need a relatively warm temperature in winter. Plants are recommended to be pruned. Pruning involves removing dead, crowded, and superfluous shoots in late winter, before new shoots begin to appear. Oleander, which is not exactly easy to care for, also requires the removal of young shoots that form at the base of the flower clusters during the development of flower buds. 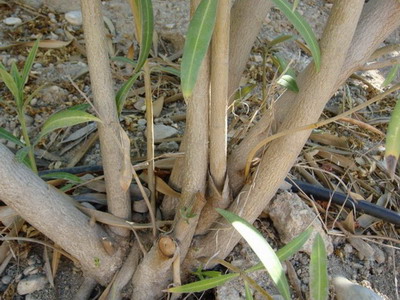 Incorrect execution of this operation is the most common reason why plants stop flowering. As soon as flowering is over, the shoots formed in the previous year should be cut back by two-thirds or more. In early autumn, flowers should be brought into a greenhouse or other bright place where the plants will overwinter. All oleanders need to keep their foliage from drying out in the winter is ample watering.

Soil Type: The soil should be well-drained. Abundant flowering is observed in sandy areas. When growing flowers in pots indoors, it is best to choose the following composition of the soil mixture: two parts loam, one part evenly mixed compost, humus or peat, and it is also desirable to add a little sand.

Watering: Oleanders need plenty of water during the summer. The best way to achieve this is to place the plants in saucers of water. Reduced watering is necessary after pruning the oleander, but as soon as intensive development begins to appear, the amount of moisture should be gradually increased.

Fertilization: Fertilization is essential for good growth. Fertilizing the flower roots with manure or compost will be most beneficial.

Repotting: Small plants are recommended to be repotted in March or April. Mature flowers that are already planted in large pots or containers do not need to be repotted every year, instead, a large amount of fresh compost should be applied. After transplanting, you need to choose a shady location to avoid direct sunlight. Also, the flower must be sprayed twice a day until it is finally accepted. When constant warm weather is established and there is no likelihood of frost, oleanders can be taken out into the street.

Reproduction: carried out by planting cuttings 8-15 cm long, which must be cut off from strong shoots in the summer. Remove the lower leaves and carefully trim the stem. Then place the oleander cuttings in a bottle or jar so that they are just below the surface of the water. The vessel can be placed in the sun. Rooting is also carried out in sand, a mixture of sand and peat, or in vermiculite. When the cuttings take root in water or soil, they must be planted in 8 cm pots. 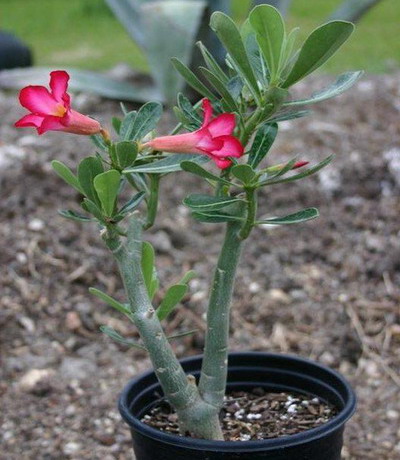 The next pruning should be done when planting oleander in 15 cm pots. Then the flowers are placed in larger containers. Thus, intensive growth of the bush is supported. Oleander, which is extremely rarely propagated from seeds, has one feature: the seeds do not remain viable for long, so cuttings are usually planted for reproduction.

Pests: Mealy worms are the main threat to shrubs. Outwardly, these are small, white, soft-bodied insects without wings, which form a waxy powdery coating. They pierce the plant with their mouth and suck the juice from its tissue. Mealy worms often look like small pieces of cotton, and they often gather on leaves and stem branches. Young individuals move throughout the flower until they find a suitable place for constant feeding. Then they can form entire colonies. Mealy worms can significantly weaken the oleander so that the foliage begins to turn yellow and fall off. In addition, a sweet substance called honeydew can form on the shrub, which causes the appearance of the flower to become unhealthy. If you find oleanders affected by these pests in your garden, immediately isolate them from healthy plants. To avoid pests, keep their natural enemies in the garden, such as ladybugs.

Additionally: poisonous oleander contains toxic substances both in the growing form and in the dried one. Never burn the plant.