Description: This is a genus of flowers that belongs to the Orchid family. They are different orchids that mainly grow in temperate regions such as North Africa, Eurasia and parts of North America. The name was borrowed from the Greek language, and it is from the word orkhis, which means testicles that appear on their tubers. These plants have straight, leafy stems with clusters of small flowers in various hues, including red, yellow, and purple. Some species show mixed traits, such as yellow-orange or purple flowers with deep blue petals. The structure of their flower cluster ranges from cylindrical to spikes that reach 5 to 15 cm. Orchid flowers are also known for having tubers instead of false bulbs – the parts where the flower stores water and essential nutrients. This means that the nature of their growth is sympodial, where the tuber roots function as the main source of nutrients for the entire plant system. Orchid flower can also grow laterally, which explains the maximum height of the plant, which reaches from 20 to 50 cm. Monopodial orchids, on the contrary, have false bulbs and they can grow higher. They may differ in the presence of a thickened stem at the base.

Light: These hardy flowers thrive in both full sun and partial shade.

Soil type: Orchids adapt to any type of soil, usually gardeners prefer loam. The pH level is best set between 5.5 and 6.5.

Watering: moderate. You can water the plant with rainwater, but be careful as it may contain harmful acids.

Propagation: carried out by planting seeds or propagation from the roots. Orchids can be successfully reproduced in any environment. These flowers have grown in the extreme conditions of the arid deserts of North and West Africa just as well as in the marshy forests of Europe. Such survival abilities are due to the fact that their tubers can be located right near the ground or deep in the soil, where water is most available. The new growth of the flower is characterized by the appearance of a single stem, on which small flowers are formed. 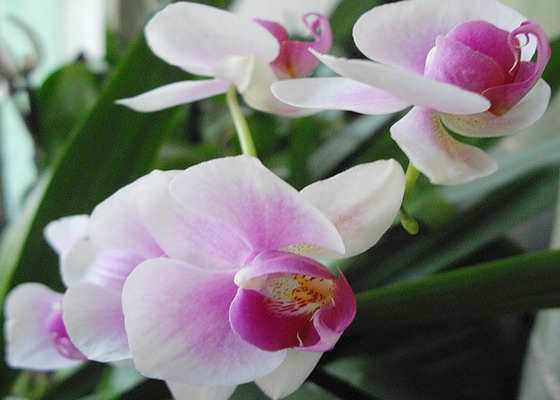 Photo of an orchid flower in a pot (at room conditions).

If you decide to reproduce orchids, it is best to start indoors. Seeds need to be buried in the soil, while the temperature should be from 18 to 24 degrees. The first shoots appear at different times, usually from 3 months to a year, so you can plant seeds in any season. It is necessary to take out seedlings to the garden after the last frosts in the spring. The distance between plants should be 10 to 15 cm.

Application: used for decorative purposes to decorate gardens, for example, helmeted orchis – Orchis militaris is very popular with flower growers. The pharmaceutical properties of these flowers are also widely known, and they are still used in folk medicine to this day. 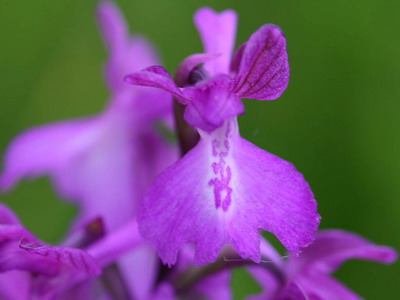 This species differs from the rest by the beginning of the flowering period. Monkey Orchis has bulbs that first sprout from the top of the stalk and these sprout down instead of the normal flower development. In the center of the flower there are three to four lobules and spotted petals. This variety is also known for its soft vanilla aroma, which is most noticeable in May and June. 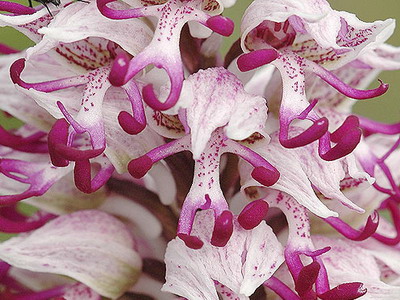