Feverfew red (other names are garden red chamomile, Persian or Caucasian chamomile) is an infrequent visitor to household plots. The plant does not impress with its exotic appearance, large inflorescences (except for a few subspecies) or unusual leaves. The attractiveness of this chamomile is modest and chaste. Her discreet beauty deserves much more attention. After all, red garden daisies can not only decorate a house flower bed or front garden, but also benefit health. 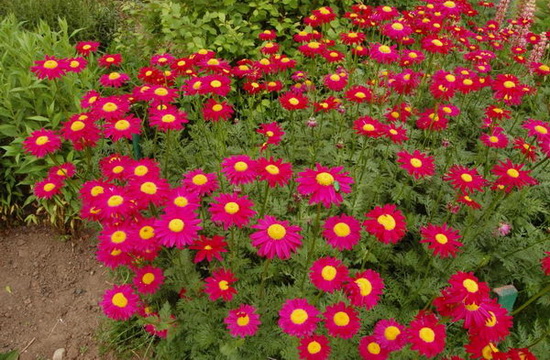 Feverfew red grows in the form of a herbaceous flowering bush. The height of the stem depends on the subspecies and varies from 60 to 90 cm. The stem is strong, straight and does not bend even under the weight of large inflorescences of some varieties, for example, Robinson’s Giants. The bottom of the stem is strewn with deep green leaves. The shape of the leaves is complex, pinnately dissected, consisting of a different number of small segments. The central part of the flowers, depending on the variety, is flat or slightly convex, has a dense yellow shape. Red petals are arranged in several rows, like chrysanthemums or gerberas. The root system of plants is slightly branched, creeping.

Red garden daisies are unpretentious in care, they love sunny areas with little shading. If daisies are planted in a heavily lit flower bed, then the red color of the petals quickly fades.

A subspecies of garden red chamomile determines the flowering period – scarlet flowers adorn the garden from June to the end of September. Prefers moist soil, but does well in dry soil.

Feverfew red does not impose special requirements on the soil, light earth that passes water well will be ideal. You can not plant a plant in marshy areas, as well as on wet, heavy substrates. Chamomile responds to top dressing with abundant flowering and bright colors of the petals.

After the flowering period ends at the bushes, the stems with dry inflorescences must be cut. This procedure will preserve the strength of the plant for further successful reproduction. The heaviness of flowers of large varieties often causes the stems to lean towards the ground, so such bushes must be tied up.

Consider a photo of red pyrethrum to imagine what this flower looks like in a flower bed: 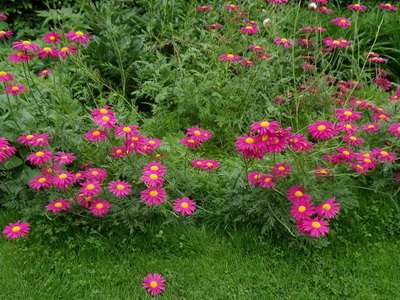 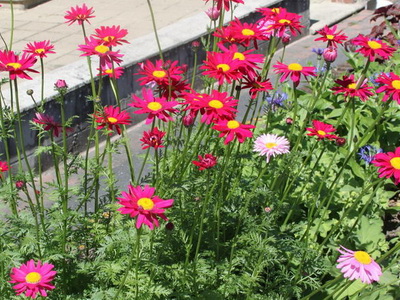 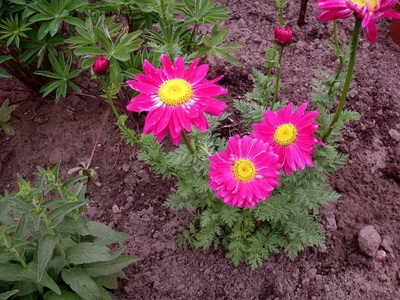 To date, breeders have bred many varieties of pyrethrum chamomile of various colors and sizes, among which you can certainly choose one or more interesting options. The vast majority of ornamental plants are perennials that tolerate frost without additional shelter, so you should not plant such a chamomile every year.

The pyrethrum chamomile variety includes about 100 varieties. Among the red garden daisies, the most popular were the following:

“Pyrethrum pink” . In height, these chamomiles reach 60-70 cm, the diameter of the inflorescences is small – up to 6 cm. The flower consists of a yellow, slightly convex center and a rim of 2-3 rows of pink petals. 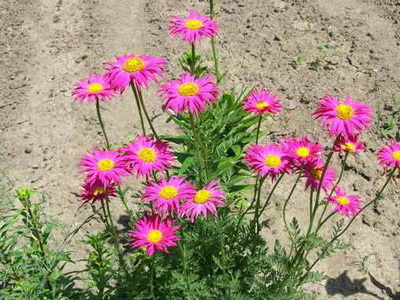 “Red feverfew” – this variety, unlike pink feverfew, has a red color of the petals. 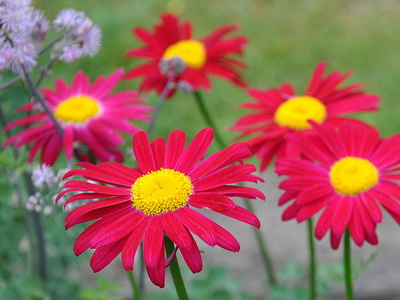 “Scarlet Star” – the height of chamomile is 70-80 cm, the inflorescences are relatively large and grow up to 12 cm. 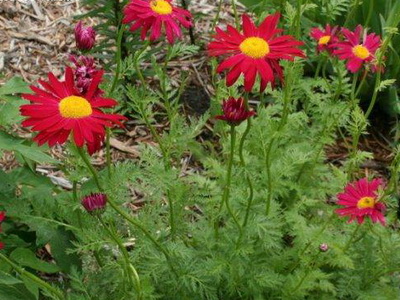 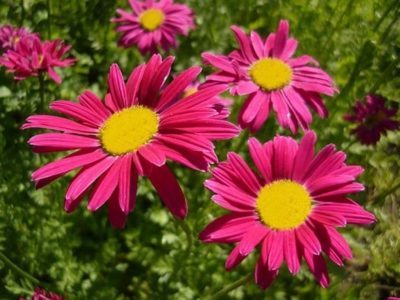 Robinson’s Giants is the most popular variety of red pyrethrum, which differs from other red and pink counterparts in height. The strong and straight stem reaches just under one meter. A beautiful bright scarlet flower with a small number of leaves located from the bottom to the middle of the stem. Many people compare Robinson’s Giants feverfew with gerberas. Blooms from the second decade of June to the end of July. It looks great in flower beds and discounts, it also looks organic in bouquets, as a bright addition. 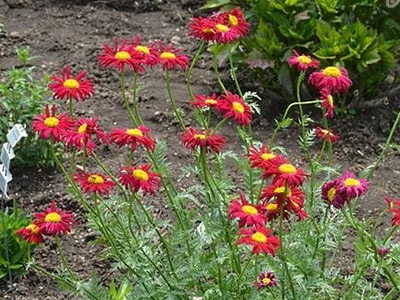 All types of red garden chamomile bloom for a long time. 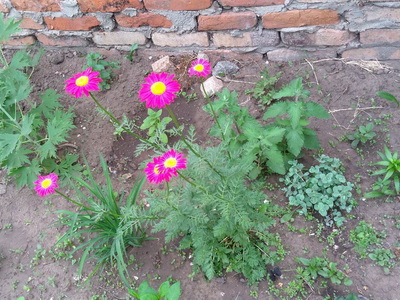 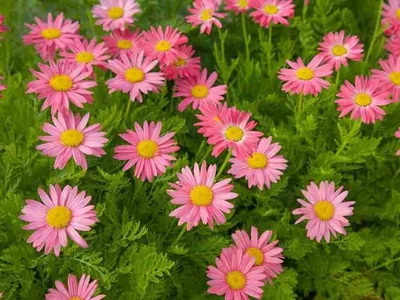 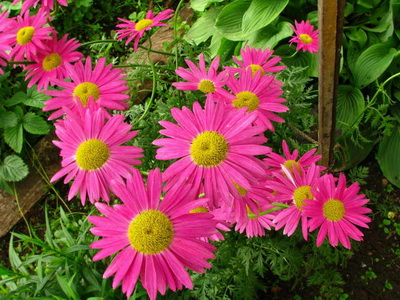 Red garden chamomile is propagated by division of the bush, young side cuttings or seeds. Seed propagation is considered the simplest, but it has one significant drawback: if there are other types of daisies in the garden, they often pollinate, so seedlings often inherit the characteristic features and color of the petals of mother plants. Even if you plant seeds from one seed box, completely different daisies can grow.

To grow pyrethrum red with the help of seeds, it is necessary to prepare a shallow container filled with nutrient soil. Seeds are recommended to be sown in the ground in the first decade of March. Cover the container with a film, making several holes for ventilation, and place it near a sunny window. 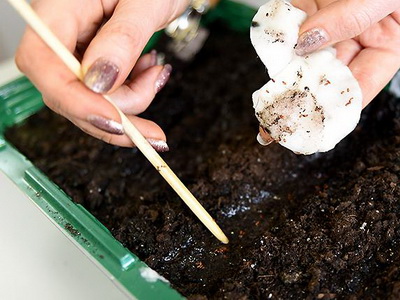 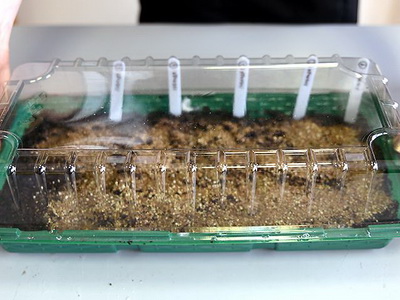 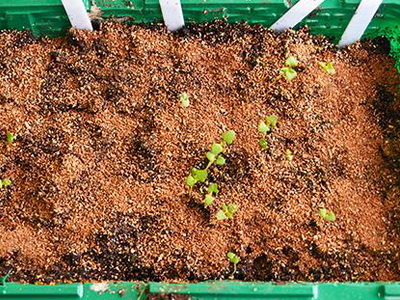 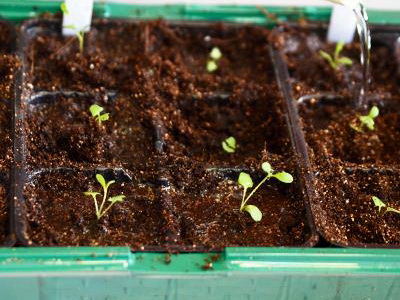 When small sprouts appear in the box, the film can be removed. Seedlings dive into separate pots when two true leaves appear. Over time, the container with seedlings is recommended to be taken out to fresh air for hardening.

In the second half of May, with steadily warm weather, mature seedlings can be planted in open ground. In the first year of life, young daisies do not bloom.

Another easy way to propagate feverfew is to divide an adult plant. The procedure should be carried out after the full completion of flowering. Chamomile is dug out of the soil, freed from the ground and divided by hands into several parts. It is impossible to divide the bush into too small parts.

Propagation by cuttings is the most complex and time-consuming procedure. In June, young basal shoots should be cut from an adult bush. They will need to be rooted in partial shade in nutrient soil and covered with a film. 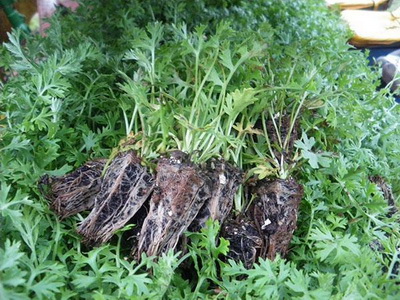 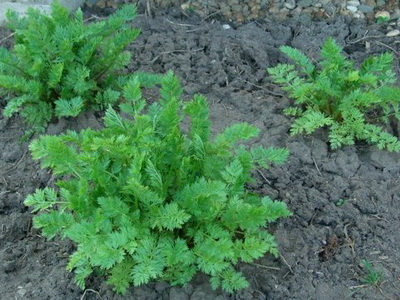 Shoots should be well watered and periodically ventilated. After about half a month, the cuttings take root, after which they can be dug up and transplanted to a permanent place in the flower bed.

It is better to make a planting hole for a garden chamomile small, slightly larger than its root system. Fill the hole with water before planting. After the moisture has gone into the soil, it is advisable to place a little nutrient soil and sand at the bottom of the recess, you can also add a handful of wood ash, which will provide the bush with the necessary nutrients.

Place the seedling in a hole, cover it with earth, water it again. Place some mulch on top. As mulch, you can use peat or chopped grass. 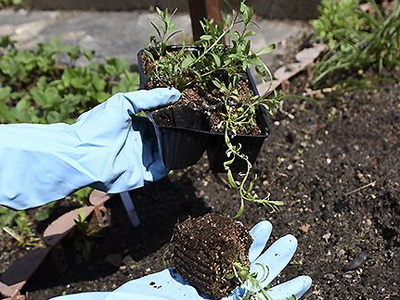 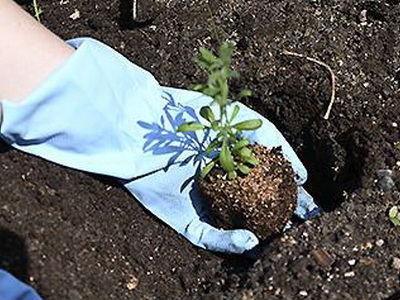 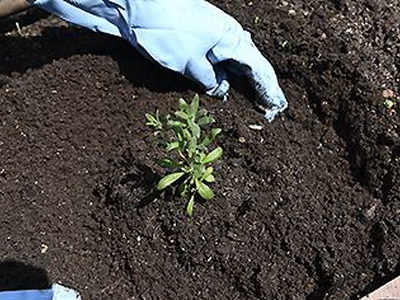 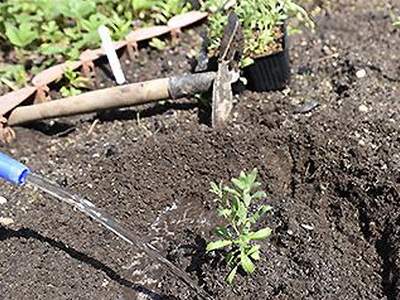 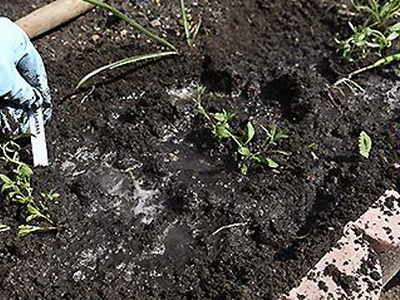 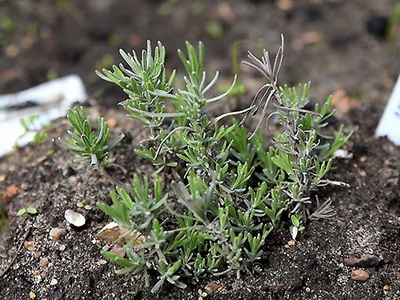 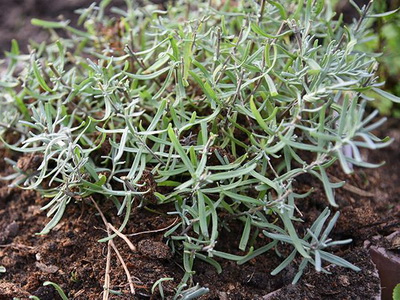 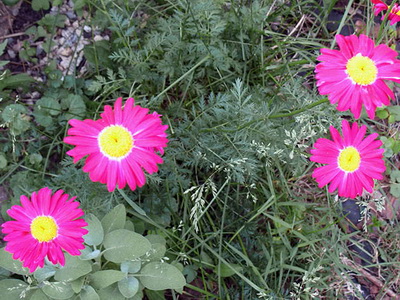 To update the overgrown bush, as well as refresh its root system, every 4 to 5 years it must be divided and transplanted to a new place. For the winter, all chamomile stems are cut off, only young bushes need to be covered.

Feverfew red is an unpretentious culture in all respects, so even beginners in floriculture can cope with care. It needs watering only in dry hot weather. She needs additional watering only during the flowering period.

The second feeding is done after flowering is completed. At this time, the plant must be given any complex fertilizer with minerals. In autumn, it is advisable to water the chamomile bushes a couple of times with an infusion of crushed weeds.

The culture is resistant to pests and diseases. The only exception is garden slugs, which encroach on chamomile foliage. 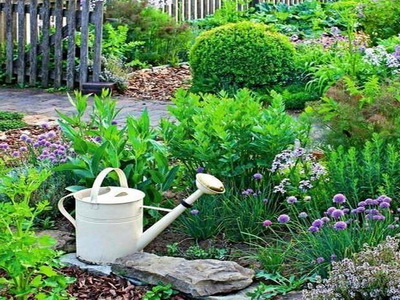 Bright and juicy red and pink feverfew flowers are the perfect revitalization of garden flower beds. They are combined with garden carnation, bluebells, white chamomile, delphinium and other flowering plants. Feverfew also looks good in single plantings. Red chamomile is often used in bouquets – the flowers look cute and bright.