Amorphophallus flower and his photo

Amorphophallus pionolifolia is common in northern Australia and Southeast Asia, introduced to Africa and America. The use of the amorphophallus plant is not as widespread as, for example, that of ginseng (another representative of the Araliyev family), but the flowering of amorphophallus attracts attention. Pay attention to the photo of amorphophallus – for their bizarre shape, amorphophallus flowers are often called “shapeless phallus.”

In nature, it settles at an altitude of 700 m above sea level in forests, thickets of shrubs, meadows and in rock crevices. The amorphophallus plant prefers damp semi-shaded places.

The renewal buds of this herbaceous perennial are laid on a brown elliptical tuber up to 40 cm in diameter. One (occasionally two) leaf is huge, about 1 m long, dissected into lobes. Petioles spotted, warty, up to 2 m in length and up to 20 cm thick. Leaf blade about 1 m, light green, tripartite. 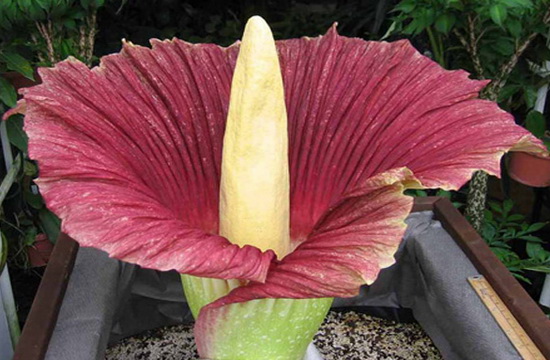 As you can see in the photo below, the flower of amorphophallus pionolifolia is an ear up to 70 cm high, located on a short pedicel. The bedspread is pinkish-brown, with stains, corrugated along the edges, up to 45 cm in length and width. 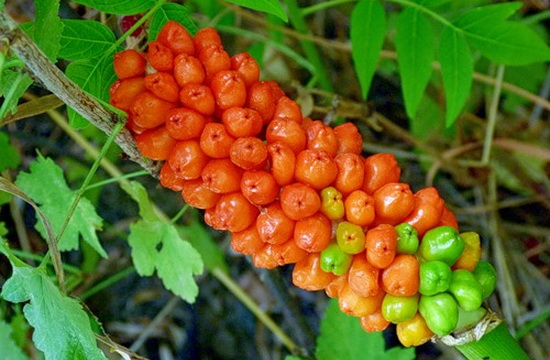 The fruit is juicy – a scarlet berry up to 2 cm long and about 1 cm in diameter.

Reproduction is seed and vegetative – by daughter tubers . Leaves appear in early autumn and fall off in spring. Pollinated by dead flies. The fruits ripen in October – November, the seeds are carried by birds.

The species is grown as a vegetable crop. In traditional Japanese cuisine, the amorphophallus plant is used to make soups or to add to stews. Its tubers are also used in traditional medicine for rheumatism, diseases of the lungs and digestive system.

The species has a large range and easily adapts to new habitats. Little is known about the population size of Amorphophallus pionolifolia, but nothing threatens the plant in the foreseeable future.