Having planted an aquilegia flower in your flower bed, for 4-5 years you can not worry about its regular watering: this plant has a remarkable ability to retain moisture inside hollow spurs and use it during dry periods. It is necessary to take care of the resumption of plantings only in the sixth year, when the aquilegia bushes begin to lose their decorative effect.

These flowers belong to the buttercup family. Plants are herbaceous perennials with a basal rosette of leaves and a long taproot reaching 60 cm. The stems are straight, with many lateral branches, well leafy, 60-90 cm high, sometimes pubescent with glandular hairs. The basal leaves are long-petiolate, dark green, dissected, and the stem leaves are trifoliate, sessile, light green. Flowers on long peduncles, solitary or in loose panicles. They are from 3 to 8 cm in diameter, drooping, in some species with spurs. Coloring – blue, crimson, pink, yellow. Often there are two- or three-color forms. Seeds brown or black, oblong.

The unique ability of a plant to collect and retain water is associated with the morphological structure of the flower. Between the sepals are narrow-funnel-shaped petals that end in hollow spurs inside. Each of them can fill with water and hold it.

Hence the name of the plant – aquilegia, from “aqua” – water and “lego” – I collect. Along with this name, there is also a Russian, more philistine – “catchment”.

Aquilegia is an unpretentious plant that grows well in sunny and shaded places, on any type of soil. But they should be moderately moist, light, loose, rich in organic matter. It is very responsive to watering, despite the fact that the deep root helps aquilegia to endure drought.

It blooms in partial shade longer, and in lighted places it is more luxurious.

Flowering aquilegia begins in early summer and lasts for a month. If you constantly remove faded shoots, flowering can be extended until September. 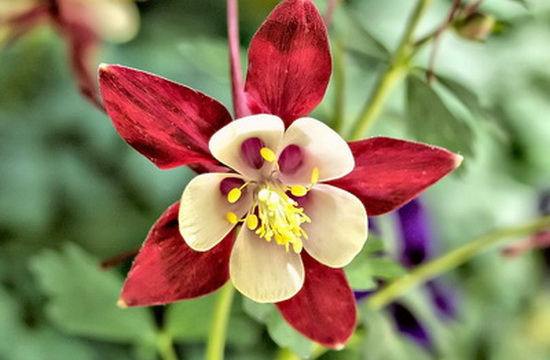 Look at the photo of aquilegia flowers – wild species are not inferior to garden ones in the shape and beauty of the flower, and even have some advantages over them.

So, they are unpretentious, bloom earlier and give homogeneous temporary offspring. Here are the main ones: ordinary, alpine, glandular, golden, Siberian.

Aquilegia varieties of the Barlow series are now popular:
“Nora Barlow” – a mixture, 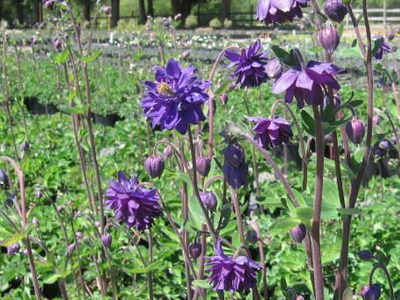 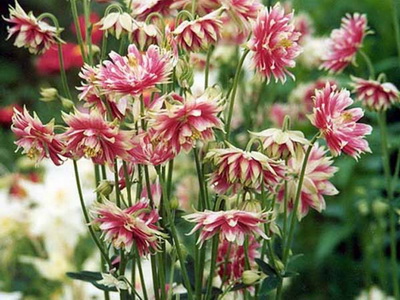 Plants are very even, with abundant branching.

Aquilegia is good for group plantings under trees, on lawns. Also suitable for mixborders, rocky hills , flower beds , rabatok. Aquilegia can grow near the trunk of a tree, putting up with poor soil and shade. In bouquets it looks very good with ferns and cereals.

Reproduction and care of aquilegia

In one place, aquilegia can bloom well for 5-6 years, but with care in accordance with the biological characteristics of the plant. And they consist in the fact that during the flowering period, on the basis of flowering shoots, renewal buds are laid, from which new flower and growth shoots are formed next year.

When planting and caring for aquilegia, keep in mind that the annual repetition of such a cycle contributes to the growth of the bush. 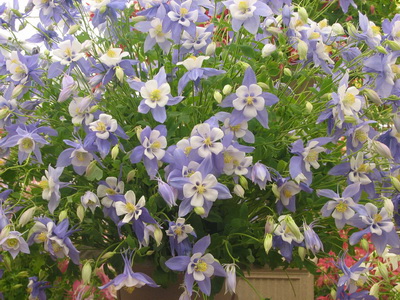 As a result, old four-five-year-old bushes seem to rise above the soil surface. At the same time, the center of the bush is exposed, since new buds are formed only on the periphery. In general, the plant weakens and gradually dies. You can extend the life of aquilegia if you sprinkle the bush with earth every year, but without making a big mound. However, it is not advisable to keep aquilegia for more than six years, even with all the agrotechnical tricks. It must be renewed by seeds, cuttings, dividing the bush.

Radical renewal is achieved only when propagated by seeds.

Reproduction of aquilegia is also possible by self-seeding. Seeds remain viable for only a year or two. The best crops come from freshly harvested seeds. They should be harvested before the fruit cracks. When propagating aquilegia by seeds, sowing is done directly into the ground in autumn or spring. However, they bloom the next year.

You can speed up flowering this year if you plant aquilegia in pots.

When the weather permits, the plants are planted in the ground. The soil on the flower garden is well-moistened, nutritious, rather loose. For 1 sq. m planted 10-12 pcs. plants. Care consists in systematic watering, loosening, weeding. Plants should be fed twice a summer. Organic top dressings and mineral complex fertilizers are suitable.

When caring for aquilegia after flowering, flower stalks are cut off, but some of them, about 1/3, are left to obtain seeds. Aquilegia is very easy to pollinate, therefore, for purity, spatial isolation must be observed (at least 2 m from each other).

Aquilegia can also be propagated by cuttings. To do this, in the spring, shoots with leaves that have not yet fully blossomed are used. They are broken, not cut. Rooted in the sand under a film with shading. Cuttings take root in 3-4 weeks. Rooting can be accelerated if treated with Heteroauxin or Kornevin.