Compositions of natural flowers, compiled by professional florists, amaze the imagination with their sophistication. No wonder – in floristry, flower arrangement occupies one of the dominant positions, because it is precisely “to put in order” (namely, the word “arrangement” is translated from French) that is one of the main tasks of a professional specialist. There are countless types of flower arrangements, and each of them deserves special attention. All of them obey a certain style of floristic compositions: as a rule, western massive or linear. There is almost an open space within the flower arrangement—only a portion of the area in the shape material structure is filled with leaves and/or flowers.

The period from 1950 to 1965 was an exciting time for floristry. The pioneering work of the likes of Constance Spry and Julia Clements continued to popularize the idea that flower arrangement can be an experience of artistic expression and not just a way to bring garden flowers indoors. Equally important was the introduction of the floral sponge, which made impressive compositions possible for everyone. In light of this rapidly growing interest in floral arrangement, the union of the Western massive style and the linear style of the East was inevitable.

Linear-massive style became widespread. This is a style in which the shaping material frame has been covered, but not completely covered, by other flowers and/or leaves. 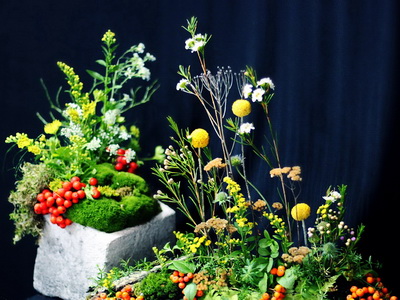 The first teachers laid down the basic principles, but unfortunately they were treated as rules, and therefore geometric shapes were painstakingly reproduced for many years. The main material was obediently grouped at the base of the composition, and the filler was used to provide a graceful transition between the various elements. Now the influence of the rules has weakened – free arrangements are now very popular. This style is great for natural compositions. In the end, the garden with its branchy shrubs above the mass of flowers in the borders really resembles a linear-massive arrangement!

For about sixty years, the “symmetrical triangle” has remained the most popular linear-massive arrangement. At the beginning, strict symmetry was the rule, with two horizontal lines at the base, consisting of the same shaping materials, and two sides of a triangle, almost identical to each other. 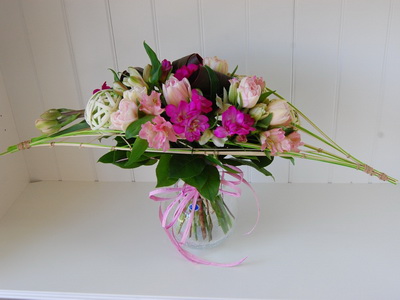 These somewhat rigid flower arrangements are sometimes considered trite, but they persist due to their popularity. There is a sense of solidity and a perfect balance, but these days florists tend to take a looser and less strict approach. A variety of shaping material is widely used, and the contours are made smooth and uneven. 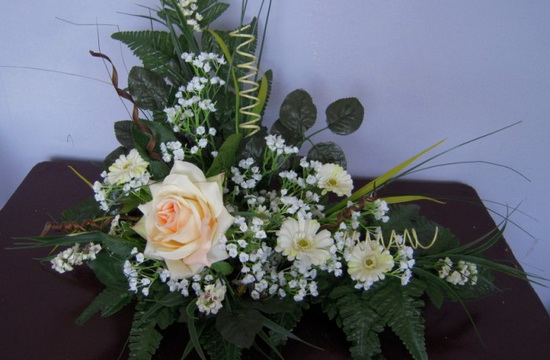 Please note in the photo that flower arrangements made in the form of an “ asymmetric triangle ” have flanks that are noticeably different in length, so that the arrangement is off-center or L-shaped, and the flowers and/or leaves at the base often hang gracefully over the edge of the container. .

This arrangement is a good choice for an exhibition. It also goes well with modern decor. In a more traditional setting, a pair of compositions composed in mirror symmetry are sometimes placed opposite each other to create a sense of greater balance.

Flowers in the composition “half moon”

“Crescent” is an attractive arrangement for a floral sponge in a small bowl: not much material is required, but it must be chosen with great care. 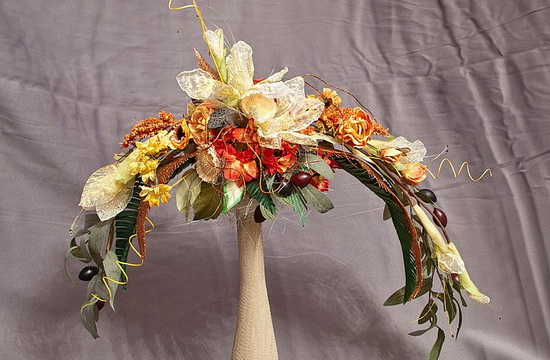 As you can see in the photo, flowers for the “crescent” composition are usually used naked or leafy.

Sometimes flowering woody branches are taken from the garden to create curved outlines, and then either garden-grown or store-bought flowers and foliage are added in the center. You may be lucky enough to find suitable curved tree shoots, but they usually need to be bent after cutting.

These curved stems are set at the ends of the block noticeably higher on one side than on the other – the secret of success is to give the impression that the crescent is made from uncut stems. The fasteners are hidden by the base material and the filler material. 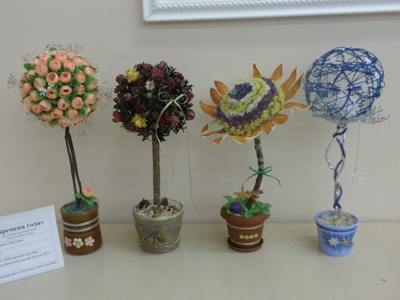 The arrangements based on the Hogarth Curve are effective and full of movement. But they are also very formal, and their popularity has declined with the trend away from geometric compositions. In order to create an S-shaped outline, you will need two sets of suitably curved stems to fit into a floral sponge block mounted on top of a tall vessel. Long and pliable shoots are used, for example, broom, ornamental currant, jasmine hololithus and rosemary.

Soak the stems in water, tie the ends with string to create a curved shape, and leave to dry for several hours. Hide the fastener with base material and filler material.

“Reverse Crescent Moon” is a popular arrangement for the center of a dining table where candles are to be turned on – candle holders are used along with them. 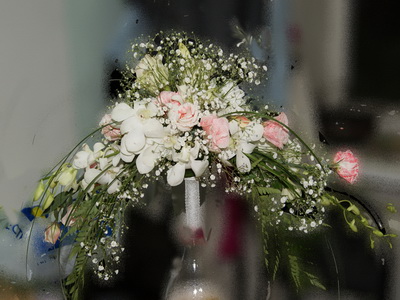 The composition should be all-round view with a base of forming material in the form of a circle or oval, depending on the shape of the table. “Reverse crescents” can also be used as a one-sided arrangement in a tall vessel , in a vase, or in an urn on a pedestal. Here the vertical lines are set by the shaping material on short stems, and the horizontal lines are naturally drooping. 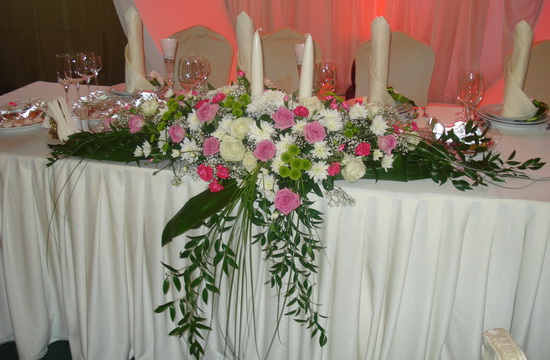 See photo: Reverse Crescent flower arrangements have a cascading effect that is enhanced by long, soft stems of filling material such as ivy and cuff at the base of the arrangement.

Horizontal flower arrangements are popular for the center of a dining table where candles should not be lit and an unobstructed view is required for people around the table. 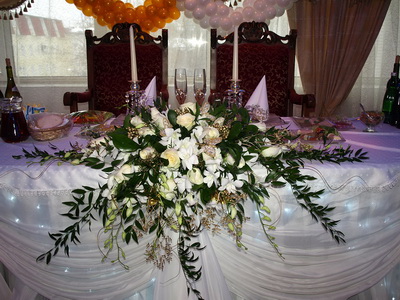 Typically, a low rectangular container is used, and either fresh or dried plant material can be used. The main difference compared to the reverse crescent is that the base line of the composition is rigid rather than drooping. Many plants are suitable for such a composition – gladioli, long-stemmed roses, boxwood, bouquet carnation , etc. depending on the size of the arrangement.

Fan flower arrangements are in some ways the opposite of a horizontal arrangement – the vertical ribs or axes are effectively spread out, and this arrangement looks best when large enough. 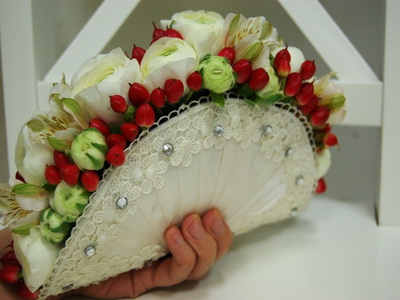 Use the fan to cover the fireplace in the summertime, or in the hallway as a standout piece on a plinth. Five, seven or nine stalks of shaping material are mounted on fasteners like spokes in a wheel.

Figures from flowers with their own hands in a free arrangement

The basic principles of free arranging are easy to understand – it is a linear-massive style with a framework of formative material that is partially but not completely covered by the base material and filler material, and with an irregularly shaped general outline. The artistic abilities of the arranger are given free rein, since there is no need to create geometric shapes, and both symmetry and placement of points of interest are completely up to you.

A few words of warning. DIY flower shapes in free arrangement are not subject to any rigid rules regarding form, but forgetting the principles of using color, proportion, background and dynamics can lead to confusion. And it’s easier to create a nice geometric than a loose arrangement if you’re not an artist.

Bouquets of hydrangeas in the flower shop