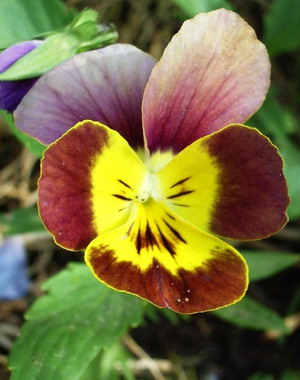 In nature, there are more than 400 species of violets on earth. In culture, several species and their hybrids are common.

The cultivation of violets in gardens was known even before our era, but special interest in them appeared in the 19th century in England. Currently, breeders are working on the selection and creation of new varieties of violets. Today, the pansy flower is widely used both for decorating landscape designs and for making various bouquets. Very often, flower growers breed pansies on the balcony to create a cozy and romantic atmosphere. At the same time, seedlings of pansies help to prolong the flowering of the plant and shape any interior.

Where does the pansy flower grow

One of the varieties of violets is pansies, otherwise viola or Wittrock violet.

Pansies are shade-tolerant, cold-resistant plants that winter well in beds under snow cover. These flowers do not tolerate hot and dry weather well, the flowers become small, flowering is weak. 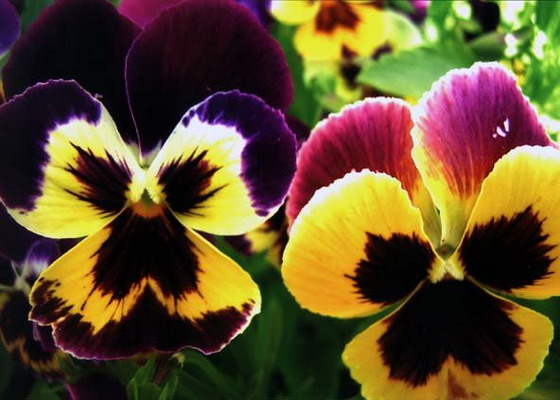 Blooming pansy violets in the photo

Pansies bloom from late April to June (before the onset of dry and hot weather). The soil is not demanding. Abundant flowering is observed when rotted manure, compost and complete mineral fertilizer are introduced into the soil at soil acidity pH 6.5 – 7.

How to grow seedlings of pansies

Pansies are propagated by seeds and cuttings. For early spring flowering, seeds are sown in July of the previous year. In summer, seedlings can be grown on shaded ridges with well-moistened nutrient soil. In March, the seeds are sown in boxes or pots, which are kept in a bright, cool room. For seed germination, a temperature of 10-20 degrees Celsius is recommended. Shoots appear in 6-10 days. Seedlings dive in 3-4 weeks.

Seedlings are planted in early May for summer flowering and in September for spring. In early spring, as the soil ripens, plants planted in autumn are fed with complete mineral fertilizer at the rate of 30 g / m2. Subsequently, feeding is repeated after 10-12 days 3-4 times. For abundant and prolonged flowering of pansies in summer in dry weather, they are watered.

Pansies: growing on the balcony and in the garden

In good conditions, seeds with high germination can only be obtained from mature bolls that have a yellowish color. The pods need to be collected frequently, as when fully ripe they crack and the seeds spill out. In autumn plantings, the seeds begin to ripen in early June, and in spring plantings, a month later.

Pansies of monophonic or contrasting colors are planted on discounts, flower beds, borders, as well as in vases and boxes on balconies and windows. This culture can be combined with other two-year-olds (daisy, forget-me-not), as well as with bulbous ones. 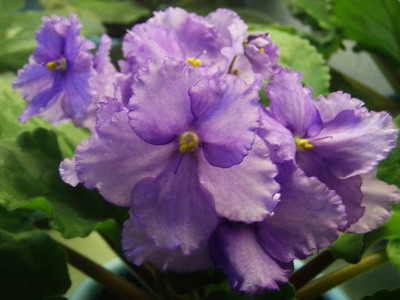 The pansy flower is perfect for growing both in the garden and in the apartment for decorating balconies and loggias. This plant is not demanding on light and temperature conditions. Also, growing pansies on the balcony does not require a large amount of land. For this flower, a small flowerpot or planter is enough.

The best varieties of pansies

There are a huge number of specially bred varieties of pansy violets. Among them, the most popular among flower growers are:

Swiss mix – with flowers of various colors, bright, plain and variegated, up to 6 cm in diameter. 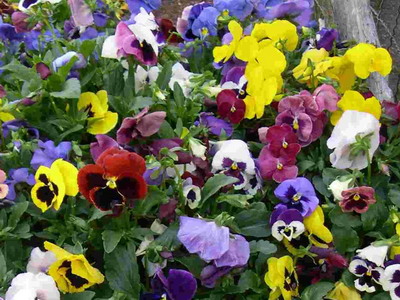 In the middle of the last century, pansy flowers served as a symbol of fidelity in love, and it was customary to give each other their pictures, placed in an enlarged image of this flower. In England, they were given to each other by lovers on Valentine’s Day. In France, in some places, there is the following custom: to hang a bouquet of pansies under the window of a girl whose fiancé has left for a long time. The bouquet should hang and constantly remind of the absent.

The bouquet should hang and constantly remind of the absent. In Poland and Belarus, since ancient times, these flowers have been called “brothers”, based on the fact that several multi-colored petals coexist in one corolla of a flower at the same time, and they are given only to those who are brotherly loved. Where the Russian name of this flower came from is unknown.

Schizanthus or schisanthus (lat. Schizanthus) is a lush bush that is...
Read more

Tell me what flowers you like and I’ll tell you who you are!

Have you ever thought that flowers can tell a lot about...
Read more

How to extend the life of a bouquet of flowers

It is pleasant to receive flowers as a gift not only...
Read more