The problems that arise when growing codiaums are mainly caused by a violation of the growing conditions, to which the culture is very demanding. Among the difficulties that flower growers face when breeding a flower, the most common fall and discoloration of the leaves, drying of their tips, the appearance of dry brown spots. Consider the causes of these problems and how to solve them.

There may be several reasons why the codiaum leaves fall. First of all, baring the trunk from below is a natural physiological process. If at the same time the plant loses its decorative effect, it must be cut off, or a bare branch should be used for propagation by air layering.

In addition, the leaves of the codiaum fall when the temperature and water conditions are violated: if the room is too cold, i.e. the temperature stays below +16 °C for a long time, or it is too dry. The flower also reacts to a lack of moisture in the soil and to its excess or stagnation, especially if it is accompanied by a low temperature.

To help the plant, it is necessary to create comfortable conditions for it: increase the air temperature, increase the humidity by frequent spraying, wrapping the container with wet moss or using special air humidifiers. In the case of an excess of moisture in the soil, especially in winter, leaf fall usually indicates rotting of the root system. Such a plant most often cannot be saved, it can be recommended to cut off the apical cutting and try to root it.

Why does the codiaum dry and fall leaves

Drying of the tips of the leaves is most often caused by dry air. Also, the leaves of the codiaum dry at too low a temperature, a lack of moisture in the soil. In order to prevent their subsidence, it is urgent to normalize the water and temperature conditions. 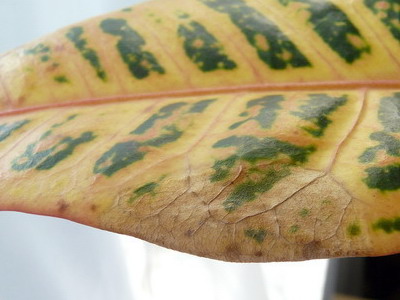 Sometimes the flower changes color. The reason for this may be a lack of lighting, which causes the disappearance of the brightness and variegation of the leaves inherent in the culture, as well as an excess of direct sun, in which the leaf plates can also seem to “burn out”. In addition, in the latter case, brown spots often appear on the leaves caused by sunburn. Variegated coloration can fade or even completely disappear with a lack or excess of trace elements in top dressing, and, in particular, with an excess of nitrogen.

The plant has poisonous milky juice, which protects it from many pests, but in conditions of excessively dry air, codiaums are often affected by red spider mites, which very quickly settle on leaf plates and cause significant damage to the flower. A sign of damage is the presence of light cobwebs on the underside of the leaf. To combat the tick, it is necessary to apply a triple treatment with a systemic insecticide such as Actellik, Neoron, etc.

Less commonly, the culture is attacked by scale insects, which leave dark brown spots with a wax coating on various parts of the plant. They are removed manually, you can also treat the flower with a soap solution in which a little vodka is added (2 tablespoons per 1 liter of water). The treated bush is kept for 2-3 hours, after which it is thoroughly washed in the shower.

Of the diseases of the codiaums, we note anthracnose, a fungal disease that provokes high humidity of the air and soil. It manifests itself in the appearance of gray or brownish spots on the leaves; treatment requires three to four times treatment with a systemic fungicide, carried out at ten-day intervals. Not only the ground parts of the flower, but also the soil are subject to processing. 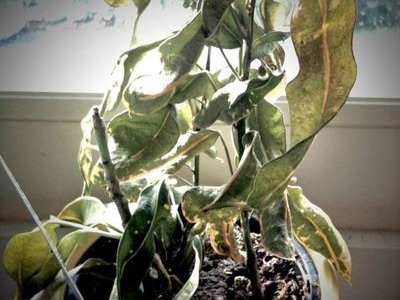