Flax (lat. Linum ) is a genus of the Flax family, uniting about two hundred species of plants used in industry and for decorative purposes. This crop is not often grown in household plots, however, those gardeners who planted flax become owners of plants with beautiful large flowers, distinguished by their unpretentiousness. The article will discuss the types and varieties of decorative flax, its breeding, and the features of keeping it in the open field.

Flax is a herbaceous perennial or annual, which is a bush about half a meter high. It has straight branching thin, but very strong stems. The leaves are linear, pointed, with small teeth, dark green. 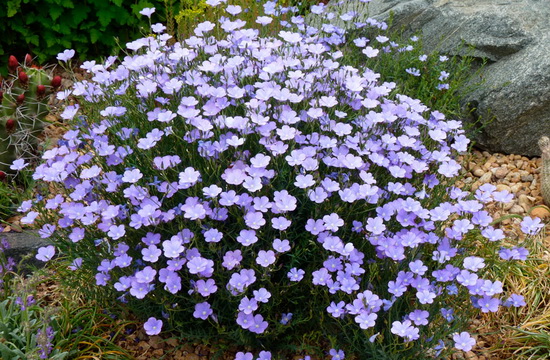 When describing a flax plant, it is worth noting that its flowers are five-petalled, wide open, and can be of different sizes, depending on the variety. The color of the petals is mostly blue, but in some varieties the flowers are white and pink. Flowering occurs in mid-summer, lasts until the end of August.

The fruit is a capsule consisting of five nests, each of which is divided into two parts. They contain one seed each. Seeds are oval, brown, with a yellow stripe along the edges, oily in structure.

Linen successfully combines beauty and practical value. It decorates the flower garden for several months, and at the end of flowering, fruits appear on it with seeds containing about 40% of valuable oils. The characteristics of the best types and combs of flax plants that are in demand in ornamental gardening are given below.

Oily. This species is bred not only in the plots, but also in room conditions. The most valuable are its seeds, which have a high nutritional value. The plant is a bush with straight shoots branched in the upper part, up to 30 cm high. The flowers are small, solitary, five-petalled, can be golden yellow, blue and pink.

Large-flowered. It is a bush with ascending weakly branching stems, the height of which is 50 cm. This species is distinguished by the large size of inflorescences, painted in different shades. Suitable for breeding in mid-latitudes. Under good conditions it can be grown as a perennial.

Perennial. The most popular variety of decorative linen. Widely used in landscape design.

Hairy. Loose bush with thin flexible stems 40 cm high. The leaves are linear, dark green. On the surface of foliage and shoots there is a hard pile. It has light blue wide open flowers.

Perennial blue. Perennial weakly branching plant a little over half a meter high. The flowers are five-petalled, light blue, 2 cm in diameter. Flowering of this species begins in the first half of June, ends in August. The plant is immune to sub-zero temperatures, so it hibernates without shelter.

Red. Annual graceful shrub with thin dark green shoots with light branching in the upper part. The leaves are oblong-oval. The flowers are large, cup-shaped, red. 4 cm in diameter. Flowering of one bud is one day. After a day, the petals fall off, instead of wilted flowers, new buds form.

After a day, the petals fall off, instead of wilted flowers, new buds form.Сnorthern. Another decorative type of flax, which is a low bush with branching stems about 30 cm long. It has a powerful long rhizome that goes deep into the soil. The flowers are cup-shaped, with oval petals of the correct shape, blue in color, formed singly or collected in few-flowered inflorescences. Flowering lasts throughout the summer.

Yellow.Perennial variety, reaching 50 – 60 cm. It has straight ribbed shoots, densely covered with foliage. The flowers are wide open, cup-shaped, bright yellow, 3 cm in diameter. This species pleases the eye with flowering from June to August. The species is unpretentious, can successfully develop and bloom even in the shade.

Among the most interesting varieties of flax from a decorative point of view, the following are distinguished:

“Sky Azure” – tall variety, reaching 80 cm. It has ribbed branching shoots. Flowers are formed on lateral stems. The color of the petals is sky blue. The buds open in the morning on sunny days. The variety is planted in empty areas of the garden to create bright carpets.

Flax is propagated in several ways: with the help of seed, by dividing an adult overgrown bush, by cuttings. If the garden does not yet have this crop, you will have to purchase seed in a specialized store. To grow flax from seeds, they can be laid immediately in open ground in the spring with the onset of warm days, or in late autumn before winter.

With such sowing, a ridge should be made, the seeds should be evenly spread on the surface of the earth, without deepening, and sprayed from a sprayer. This method of growing flax is suitable for regions with a mild climate. In mid-latitudes, seedlings are first grown at home, which are hardened before transplanting into open ground and only then placed on the site.

To plant seeds for seedlings, you will need boxes that should be filled with nutrient soil. Spread the planting material over the soil surface, moisten, cover the crops with polyethylene to create greenhouse conditions. It is necessary to germinate in a room where enough sunlight enters, with a temperature of 24 degrees.

In open ground, grown, strengthened hardened seedlings should be planted in the spring, when the air in the daytime begins to warm up to 20 degrees. Flax seedlings do not tolerate cold weather, so even a slight drop in air temperature is detrimental to them.

For planting this crop, you can choose any part of the garden, but open sunny places are preferable. The soil can be any, with the exception of marshy. Close contact with the groundwater surface is unacceptable. After planting flax seedlings in open ground, it is necessary to continue caring for young plants for their successful rooting and quick adaptation to a new place.

Other methods of reproduction

If the site already has a well-grown flax bush, preferably three years old, you can propagate it by dividing it. To do this, in April or August, before the plant blooms, you should carefully dig it out of the ground and divide it into several parts. You need to separate the parts so that each of them has strong intact roots. Then the delenki must be placed in the prepared hole, covered with earth and watered.

When cuttings, planting material is harvested in the first half of August. The strongest healthy shoots are selected, from which cuttings 7–10 cm long are cut. The inflorescence is removed from the shoots, the lower part is treated in the Kornevin solution.

For rooting, the cuttings are placed in a container filled with a mixture of peat and sand. Components for the preparation of the soil mixture are taken in equal parts. From above, the planting material is covered with plastic wrap.

To prevent the stalk from rotting, the accumulated condensate should be constantly removed until the root system is formed.

For the full development of flax, it is necessary to create the usual growing conditions, consisting in timely and moderate watering, top dressing and other activities. In return for his work, the gardener will receive a profusely flowering plant with bright buds that adorns the site.

Watering. Flax needs systematic watering, but moisture should not be allowed to stagnate in the soil, this will lead to rotting of the roots of the plant. The number and volume of watering should be adjusted, depending on the weather. So, in prolonged heat, you should irrigate the bush 1 – 2 times a week.

You need to navigate by the state of the earthen coma. The soil around the bush should always be slightly moist, but not waterlogged. Watering should be carried out during the daytime so that there is no stagnation of water. By autumn, the number of waterings is reduced, and gradually stop them altogether.

Topdressing. The first top dressing is carried out during planting, adding a little organic matter and fertilizer containing potassium to the planting pit. A month after planting, the fertilizer is applied again using a liquid mineral composition. The third top dressing is added after flowering to restore the strength of the plant. Fertilizer application is combined with the irrigation procedure.

Other care. It is important after watering to loosen the soil near the bush and eliminate weeds. If this work is neglected, the condition of the plant will worsen, as weeds will take nutrients from the flower and provoke various diseases.

In order for new buds to constantly form on the bush, wilted inflorescences should be removed in a timely manner.

Flax has strong immunity, so it is rarely affected by pests and diseases. Occasionally, as a result of improper care, the plant can be attacked by a flax flea, which is a small insect of black or dark green color.

This pest eats the seeds contained in the flax pods, sucks the juice from the leaves and shoots. If measures are not taken to eliminate the flax flea, the bush will be completely affected within a couple of months. Insecticides will help to destroy the insect.

Another pest of flax is thrips. The insect settles on the plant and feeds on its juice. As a result, the bush stops developing, the leaves dry out, the inflorescences quickly wither. The fight against thrips is also carried out using chemicals.

Compositions, which include linen, always look very beautiful, unusual, have their own unique style. This culture looks great in group plantings, especially if two different varieties are planted side by side. With the help of this plant, ridges, rock gardens, picturesque borders, mixborders are created.

Decorative flax has a lot of advantages, because it is unpretentious, it can grow and bloom in almost any area, with the exception of swampy areas, it looks very elegant, it can transform any flower garden.

Fescue: characteristics of species, how to plant and grow

Fireweed flowers and its types with a photo

Flax: types, cultivation and care in the garden