Clivia is a genus of evergreen, stemless herbaceous perennials of the Amaryllis family, native to the western regions of South Africa. All the few species are very decorative , some have long been widely used in indoor floriculture.

Description of the clivia plant with a photo: homeland and general information

Representatives of the genus Clivia are plants up to 60 cm high with leathery, belt-like vaginal leaves growing fan-shaped from a basal rosette. Their length depends on the species and varies from 40 cm to 1 m, the color is usually dark or bright green. A characteristic feature of the culture is the absence of a stem; instead, there is a so-called false stem, which is formed from tightly closing lower parts of the leaves. Clivia of some species form a false stem of considerable size, for example, in some specimens of stem clivia, it can reach a thickness of 4 cm and a height of 2 m.

The structure of its root system can be considered a unique feature that distinguishes the culture from other amaryllis. The flower is like a transitional form between a rhizomatous and a bulbous plant; instead of a bulb, a short thick rhizome is formed under the ground with long fleshy roots of a weakly fibrous structure that store moisture and nutrients. The natural habitat of the flower is the area along the western coast of South Africa. At home, clivia grows on the plains and in the wooded foothills of the Transvaal and the Cape region, which are distinguished by an even, moderately humid climate without dry periods. Here, the plants do not experience a lack of moisture, so they do not need bulbs, which, as you know, are designed to accumulate a supply of nutrients and water to survive in adverse conditions. 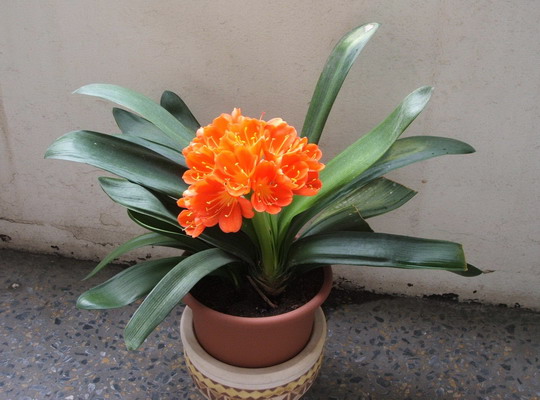 Clivia flower in the photo

Clivia flowers, up to 3 cm long, have a tubular or funnel-shaped corolla, are collected in a dense umbrella inflorescence, bloom in turn on the top of a strong peduncle growing from the leaf axils. The color of the petals can be red, orange or yellowish-pink. A large amount of nectar is produced in the corolla tube, filling its volume up to half or more, which under natural conditions helps to attract many insects to the flower. Interestingly, in nature, the plant is also pollinated by birds.

As you can see in the photo, the clivia flower is very decorative. A well-developed plant may have several peduncles, the number of buds in one inflorescence reaches 30, and sometimes 60 pieces, due to their gradual blooming, the flowering time lasts up to 2-3 weeks. 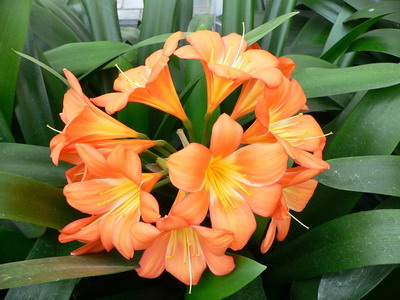 The fruits are a box, outwardly similar to a berry, dark green at first, bright red when mature, inside which there are single seeds. In room conditions, fruits can be formed only as a result of artificial pollination. Their maturation time is about 8-9 months. 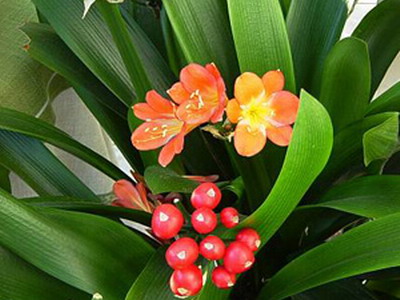 Even after flowering, clivia, decorated with bright large berries, remains very decorative. In some species in nature, seeds often germinate right inside the berry, after the formation of the root and the first leaf, they break the box and fall to the ground, where they continue their development.

Below is a photo of a clivia with bright ripening berries that make the plant attractive even outside the flowering period: 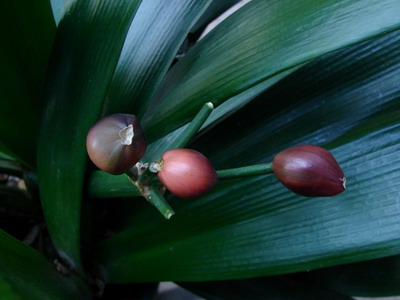 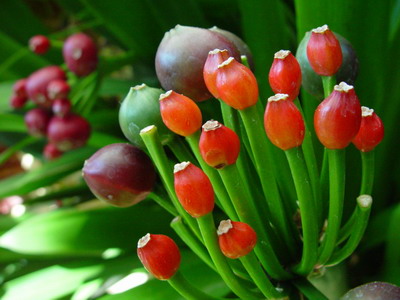 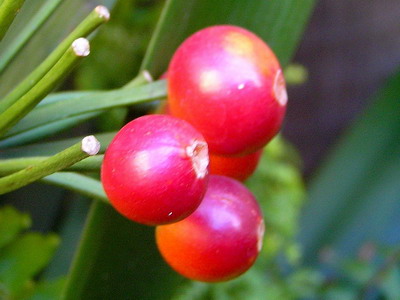 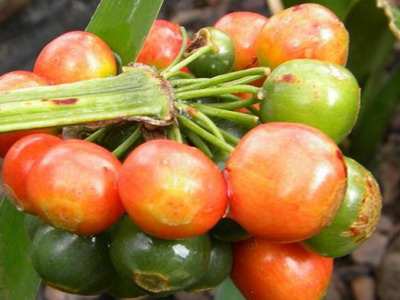 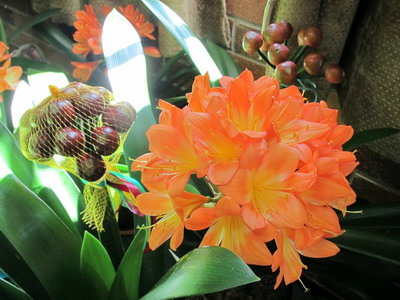 The culture is characterized by slow growth, it sheds 5-6 leaves per year, instead of which the same number of new ones grow. The average life span is about 15 years, there are specimens whose age reaches 40 years.

Clivia owes its name to the Duchess of Northumberland Charlotte Clive, who served as a governess to the future Queen Victoria of England. It is believed that botanist John Lindley gave the exotic African flower the name of the Duchess, since it was her plant that first bloomed indoors. 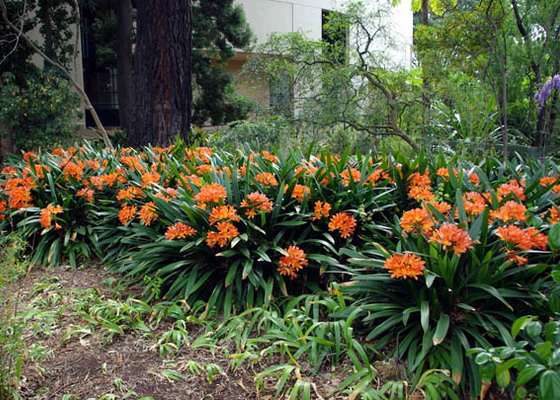 Clivia in its natural environment in the photo

Due to the fact that in nature the clivia flower lives in the subtropical climate of the forests and foothills of the Transvaal and the Cape region, it is not too demanding on lighting, relatively unpretentious, tolerant of the dry air of apartments, therefore it is widely used in indoor floriculture.

When cultivating a plant at home, you need to remember that clivia is poisonous. Its milky juice and rhizomes contain the alkaloid lycorine, which can cause nausea, vomiting, salivation, indigestion, and in large doses even leads to paralysis and collapse. The flower is especially dangerous for small children and pets, which, if overlooked, can be poisoned by its leaves. With normal care, it is enough after and during work with the culture not to touch your eyes and wash your hands thoroughly if they get milky juice from damaged parts of the plant.

Photos of clivia flowers of various colors grown in room conditions are presented below: 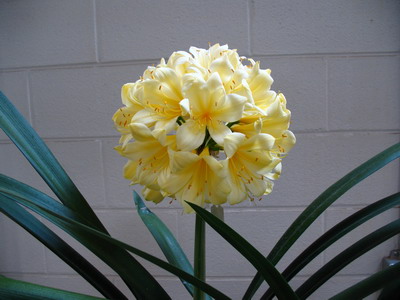 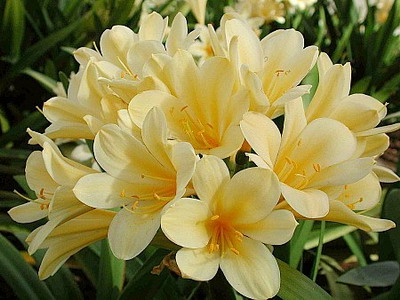 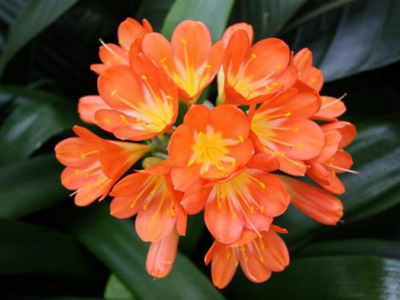 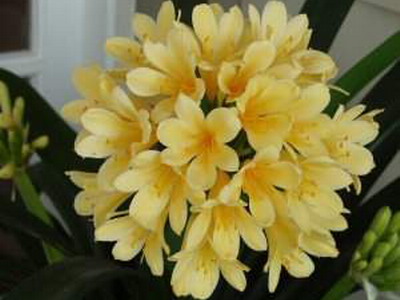 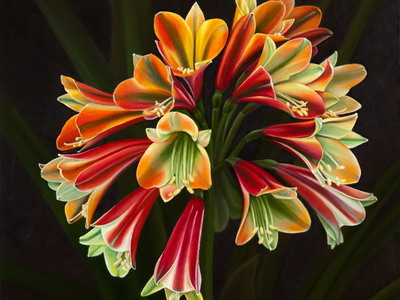