The genus name Callisia comes from the Greek words kalos (“beautiful”) and lis (“lily”). Representatives of the genus grow in humid, semi-shady places in the subtropics and tropics, forming dense sods. In nature, the callisia plant is common in Mexico, North and South America, and the Antilles.

Types of callisia and their photos

Callisia graceful (Callisia elegans) is a perennial herbaceous plant with creeping stems. The leaves are ovate with a pointed apex, 2 cm long, 0.5-1 cm wide. Above they are velvety, dark green with narrow longitudinal silvery-white stripes along the veins, purple below. Callisia flowers are small, white at the tops of the shoots. 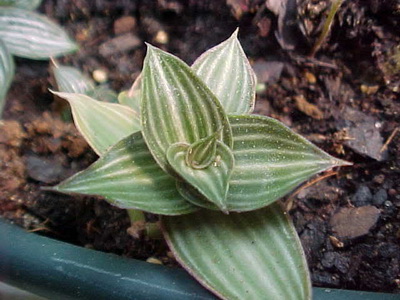 Creeping callisia (Callisia repens) about 10 cm high, its stems are creeping, creeping, densely leafy. Leaves with a tubular sheath tightly covering the stem, heart-shaped, pointed at the end, about 10-15 mm long. As you can see in the photo of callisia, the leaf surface of this species is green, the reverse side has a burgundy hue. 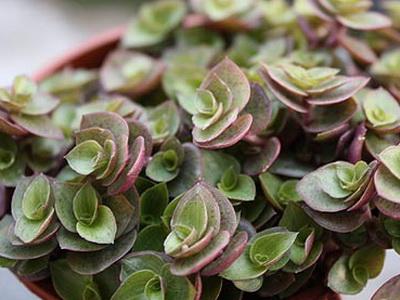 Fragrant callisia (Callisia fragrans) is distinguished by its large size and shoots of two types. Some shoots are upright, juicy, up to 80 cm high, with large shiny bright green alternate leaves. 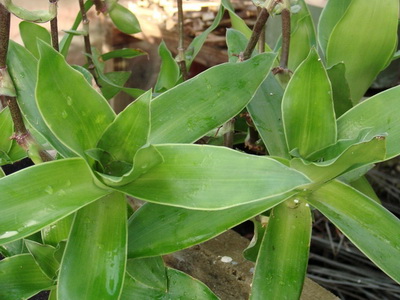 From these shoots depart other, horizontal, similar to air stolons, with underdeveloped leaves. Horizontal shoots end with rosettes of young leaves. There is a variegated form.

Plants are placed in partial shade or in bright diffused light. The color of callisia leaves directly depends on the intensity of lighting. With a lack of light, the shoots stretch out and become thin, weak, brittle. Plants do not like sudden temperature drops. In summer they are kept at a temperature of 18-22°C, in winter – 15°C.

Callisia is watered with soft settled water, in summer – abundantly, as the top layer of the substrate dries up, in winter – moderately. However, overdrying the earthy coma can lead to the death of the plant. Callisia prefers high humidity: it requires regular and fairly frequent spraying. Graceful callisia is sprayed carefully, with a fine spray.

When caring for callisia at home, regular feeding is necessary: the plant is fed during the growth period, from March to October, once a week with mineral fertilizers. The flower tolerates pruning well.

Young plants are transplanted annually, adults once every two to three years. Transplantation is carried out in spring or autumn. The substrate for planting is prepared from a mixture of compost and leaf soil and sand, taken in equal amounts. Good drainage is required.

Propagated by cuttings and shoots (whiskers). The most favorable time for breeding is March-April, but if necessary, you can breed all year round. In March, the top of the shoot with two to four nodes (joints) is cut off from the callisia, the lower leaves are removed, the upper ones are shortened by a third. Sections of the cuttings are dried for two to three hours, then the cuttings are planted in pots, the soil substrate is abundantly moistened. Planted cuttings are covered with a transparent cap for better rooting.

In addition, you can cut a rosette of leaves with a small part of the stem from a horizontal lateral shoot and place it in a vessel with water. Roots form within 10-15 days. Then the young plant is planted in a pot with an earthen mixture and watered abundantly.

The main pests of callisia are aphids, cyclamen mites.

Attention! Some plants from the genus Callisia can cause allergic reactions in pets (especially cats and dogs), which are expressed in itching and redness of the skin. The most dangerous species in this regard are fragrant callisia and creeping callisia.