Mountain acanthus lives in the tropics and subtropics of Africa, introduced to Europe. The main habitat of acanthus flowers extends from Ghana in the west to Sudan in the east, from Niger in the north to Angola in the south.

We bring to your attention a description of the acanthus flower, a photo of the plant, a story about the biology of its development, the meaning and use of mountain acanthus leaves in folk medicine, as well as some interesting facts from the history of acanthus.

The acanthus plant prefers shady and damp places, but can tolerate drought and bright light. Settles on the slopes protected from the sun and along the banks of streams.

Description of acanthus flowers and their photos 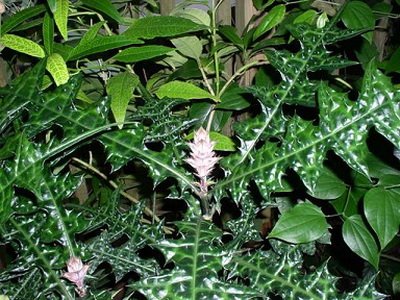 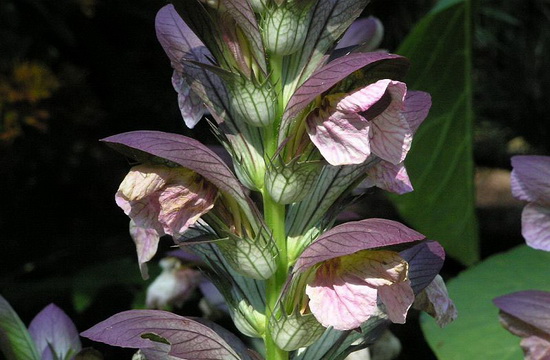 As you can see in the photo, acanthus has bisexual, zygomorphic flowers up to 5 cm long.

Collected in an inflorescence in the form of a spike up to 25 cm high. Calyx and bract with thorns, corolla two-lipped, pale pink or purple. The dry fruit is a two-celled pod.

Biology of the development of the acanthus plant

The flowering period of mountain acanthus is in the summer – the beginning of autumn. The plant is pollinated by insects, usually bees. The ripe box is sharply opened by two valves, and the seeds, like throwing discs, are thrown out with force thanks to the jaculators – springy outgrowths on the inside of the valves. Young acanthus sometimes grow at a distance of tens of meters from the mother plant.

Alternate names “mountain thistle” and “bear’s paw” mountain acanthus received due to its prickly leaves. The name of the genus, translated from Greek, sounds no less menacing – “spiky”

The meaning and use of the acanthus flower

The species has medicinal properties that are still poorly understood. It is used in folk medicine in Cameroon as an analgesic and anti-inflammatory agent, as well as to prevent miscarriage during a difficult pregnancy.

Acanthus mountain, long-leaved (A. longifolius) , soft (A. mollis), prickly (A. spinosus) and Dioscorida (A. dioscoridis) are grown in gardens of the subtropical and temperate zone, sometimes as potted plants. Lush inflorescences are suitable for making dry bouquets. 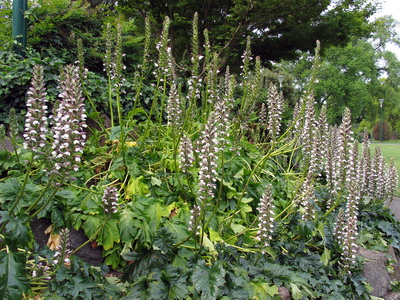 In antiquity, the acanthus flower was a symbol of courage, perseverance and victory over difficulties. It was believed that it grows on the graves of valiant warriors. However, in Christian symbolism, the thorny leaves of the plant are associated with the rebelliousness of the sinner and suffering.

The bizarre shape of the carved leaves of the acanthus plant led to the appearance of the floral ornament of the same name, which was very common in ancient Greek, Roman and Byzantine architecture, and then became popular during the Renaissance. It is found in the design of ancient fences, statues, famous buildings and structures of St. Petersburg, for example, the Faberge House, the Alexandrinsky Theater, the Mikhailovsky Palace, St. Isaac’s and Kazan Cathedrals, the Annunciation Bridge. Acanthus is also entrenched in heraldry: they can be seen on the family signs of European nobles, the emblem of the British lighthouse and pilot corporation Trinity House, the arms of Glasgow, Nikopol, the Canadian province of Nova Scotia and the Ulyanovsk region of the Russian Federation. Different variations of the ornament with acanthus are used by artists to this day. 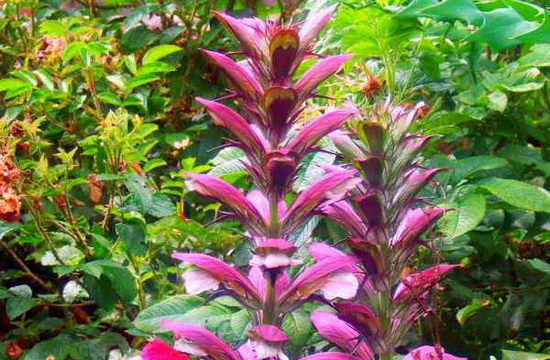 Look at the photo of acanthus flowers: the stamens are tightly closed, and the pollinator has to crawl between them to get to the nectar. The head and chest of the insect are covered with pollen.

Herbivores hardly touch the mountain acanthus – its hard prickly leaves are unattractive to them. The main danger to the species is pollution of water and soil.