Cereus cactus: main views in the photo with a description

Cactus
Last modified: 22.12.2011
0
HomeCactusCereus cactus: main views in the photo with a description

The largest genus of cacti, which includes about 900 varieties and species that differ from each other in size, color, shape and structure of the stem, root system, the presence of thorns and geographical location (northern, southern cacti). Almost all cereus species under natural conditions are tall plants from 1.5 to 15-20 m in height, up to 70 cm in diameter. There are varieties of cereus growing singly or in groups, creeping, branching or bushing.

Description: grows in southeastern California, Mexico, Arizona and the Sonoran Desert. It is a branched huge column, reaching 20 m in height and 70 cm in diameter. The trunk of a cactus has from 10 to 24 blunt ribs with brown teat circles. The spines of this species can be up to 7 cm long. It blooms from May to June, large, solitary, purple-red, white, rarely yellow, green or orange flowers appearing on old pads and tubercles of the plant. The flowers are tubular, erect, regular in shape, open at night.

The plant bears fruit with edible, fleshy and brightly colored tuberculate or smooth berries containing seeds. Cereus giant, due to its size, became the Guinness Book of Records holder and has the status of the state flower of Arizona.

Photo of a giant cereus in natural conditions.

A powerful, developed root system is located at a depth of up to 1.5 m and grows to the sides within a radius of up to 30 m. This type of cereus is incredibly resistant to high temperatures and drought, able to tolerate frosts down to -5 -7 ° C.

Under natural conditions, the plant is up to 12 m tall, as an indoor culture up to 1.5-2 m. The Peruvian Cereus has white flowers with an unpleasant odor up to 20 cm long and about 10 cm in diameter. The stem is deeply dissected into 6-8 ribs. The fruits are spherical, from light yellow to orange, about 6 cm in diameter, with large, black seeds. Read more… 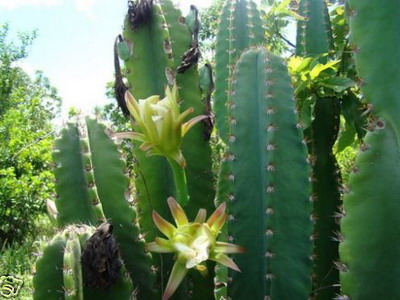 Description: A fast growing plant with a profusely branching trunk up to 12 m tall. Cereus yamakaru has stems up to 20 cm in diameter, divided into 4-6 ribs, green in young individuals, gray-green in adults. Spines yellowish, with a red-brown base, 15-20 pieces, five of which are central, up to 1.5 cm long. 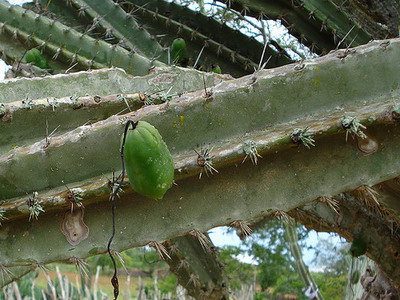 With age in the areole, the number of spines increases to 25-30 pieces, and the length of the central ones reaches 10 cm. Flowers up to 25 cm long are white. The fruits are fleshy, oval in shape, with a smooth surface, up to 12.5 cm in length and 7.5 cm in cross section. Widely distributed in Brazil, where it grows singly or in groups in regions up to 900 m above sea level. In a pot culture, it miniaturizes, grows up to 1.5 in height and up to 25 cm in diameter. Tolerates frost down to -8°C.

Description: a plant with a columnar stem in natural conditions up to 15 m tall and up to 1.5 m in diameter. Stem with 5-8 ribs, with a blue wax coating. Cereus Uruguay is covered with groups of brown sharp spikes, the length of which reaches 2 cm. On adult specimens, beautiful flowers up to 15 cm in diameter can appear, red on the outside and white inside. A thermophilic species that tolerates drought well. 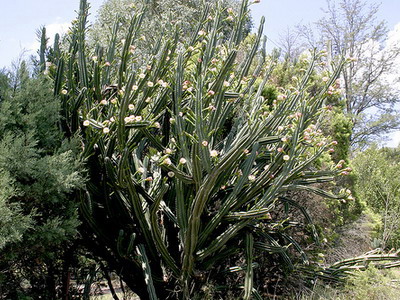 A special form of the plant is a kind of cactus with bizarre and varied forms. Cereus monstrous in nature reaches 6 m in height and grows up to 5 m in diameter, with attractive branching stems, with a bluish tint and unequal ribs forming intricate shapes. 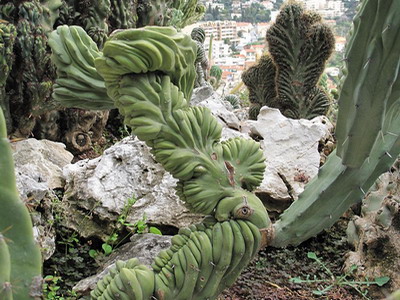 It forms several shoots, consisting of narrowed and expanded sections and randomly located short ribs and tubercles. On the ribs and tubercles of the areola with spiny or needle-shaped spines of brown color. At home, this species never blooms, grows slowly, reaching 1-1.5 m in height, prefers a warm winter and propagates by rooting stem cuttings.

Description: medium or small, short cylindrical or spherical cacti , single or with offspring. Cereus mammillaria instead of ribs has spiral papillae. Its numerous flowers appear in the axils of the papillae of last year’s growth and are arranged around the top of the stem in the form of a wreath. The flowers are large or small yellow, white or red with abundant woolly pubescence. After flowering, berry-like, not large bright fruits appear, in which large seeds ripen. 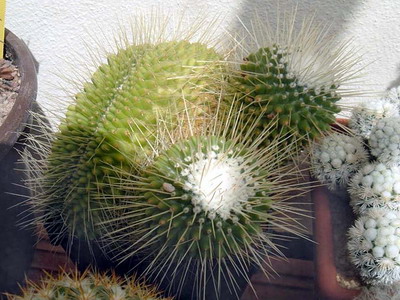 It grows in the southern part of the USA (Honduras, Venezuela, Guatemala, Mexico).

Description: unpretentious plant from the desert regions of America. Cereus Strauss in a pot culture grows up to 1 meter in height and up to 15 cm in diameter. As you can see in the photo, the Strauss cereus cactus has a stem in the form of an elegant straight column, completely covered with many finest white spines. The central spines are larger and colored yellow. Small tubular flowers are covered with brown or dark red fine hairs. 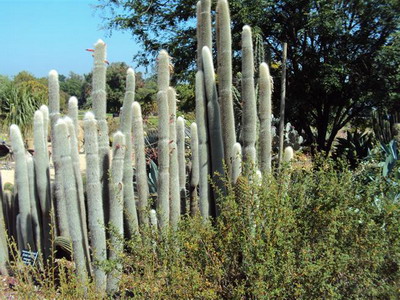 This species does not tolerate drought and suffers when the temperature drops below +5°C. Propagated by seeds.

Description: bushy repandus grows up to 5 m tall. It has a stem with 8-10 gray-green ribs with long, up to 5 cm, numerous gray spines. Under natural conditions, the stems form dense thickets. The fruits are red, densely covered with small spines. It grows in the southern part of Brazil, where, due to its bushiness, it is often used as a hedge. 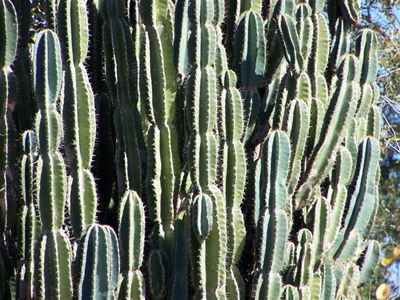