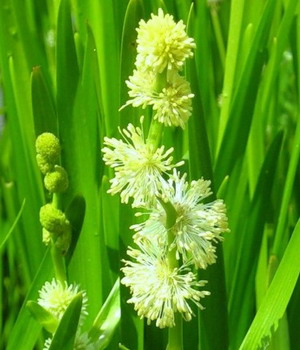 The type of plant is perennial.

Description: refers to coastal plants that are prone to rapid growth. Family – cattails. In nature, they grow in the following places: the banks of ponds, rivers and swamps. Hedgehogs have a height of up to eighty centimeters, a creeping rhizome, erect stems and rise above the water surface. Sometimes an aquatic form is formed with weaker long stems. The width of the leaf blades is from three to twelve millimeters, linear or narrow-linear, have a midrib protruding in the form of a keel. Their color is bright green, and this coloration persists until late autumn. The foliage is not as strong as reeds or cattails. When cross-sectioned, the air chambers are clearly visible in the leaves. The burrows have two types of roots. Some spread in the water and absorb nutrients, while others are firmly fixed behind the bottom.

There are several common types of this plant: straight, northern, simple, small and unnoticed.

Hedgehog straight – distributed throughout Europe and is distinguished by long, narrow, covering the stem, triangular leaves, similar to the foliage of irises. 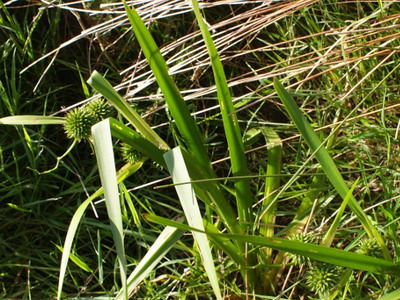 Northern – distributed in Siberia, North America, the Far East. Differs upright, floating stems. The foliage is plano-convex, not translucent, thick, longer than the stem, with an inconspicuous midrib and rounded at the tip. 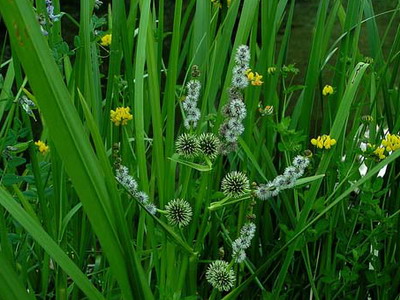 Simple – distinguished by a simple floating stem with a length of 120 centimeters. 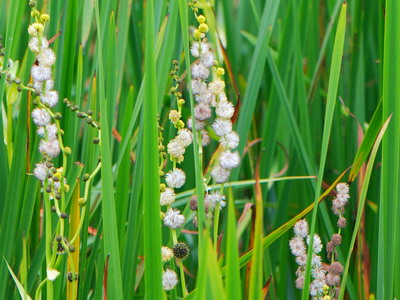 Small – has flat leaves. This species is less tall than the straight burr head, its stems are inclined in different directions, and the leaves are on the surface of the water. Starts blooming a month earlier. 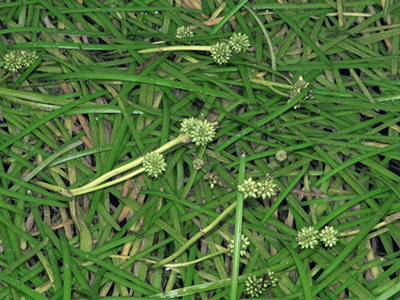 Unnoticed – a large plant up to 120 centimeters in height. Feature – strongly branched inflorescences. 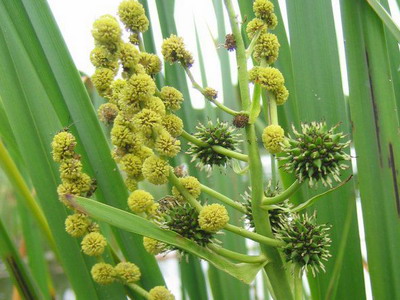 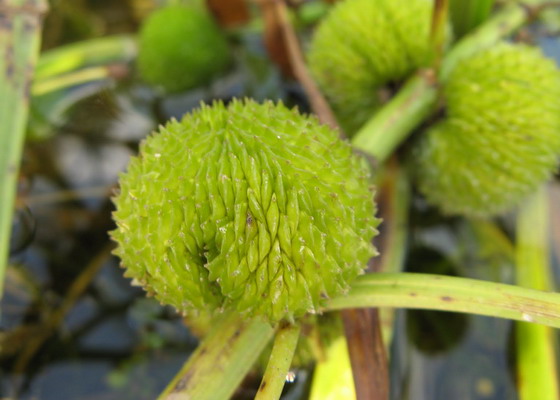 Flowering of the burdock in the photo

Flowering: General flowering is simple with 2-6 female and 3-8 male inflorescences. The female flowers are in globular heads at the bottom of the common inflorescence, while the male flowers are always at the top. Three inconspicuous brownish tepals form a male flower. The stamens are white, free, with anthers, which give the inflorescences the appearance of powder puffs. The appearance of female flowers is less pretty. They consist of a pistil with a stigma and three perianthous scales. The female inflorescences begin to bloom several days earlier than the male ones, at which time the anthers on the male flowers are still tightly closed. This ensures cross-pollination. The fruits are spindle-shaped, 4-7 mm long, with a slight constriction and without ribs, crowded into spherical original heads and resemble the shape of a hedgehog. During shedding on water, the fruits are able to stay on its surface for a long time and overcome considerable distances.

Landing: the burdock is planted along the banks of weakly flowing or stagnant reservoirs and in shallow water in the ground at the bottom. You can also use containers with fertile soil for planting. Landing should be carried out at a depth of 8-12 centimeters below the water level.

Application: burrheads are rather original plants. They can grow quickly, forming picturesque thickets, but due to the increased aggressiveness, for the purpose of decoration, these plants are used only in large reservoirs. Moreover, some species (particularly the straight burr) can cause damage to film-bottomed ponds because their roots can easily pierce the film. If you have a small body of water, then you can plant a small and floating burr. They are not so aggressive, they are smaller, and their foliage looks picturesque on the water surface.

Additionally: many species of this plant are food for nutria, waterfowl and muskrat. The following elements were found in burrheads: saponins, alkaloids, ascorbic acid, tannins, etc. This plant has low toxicity and has wide pharmacological properties. It has been experimentally confirmed that preparations containing this herb have a calming effect. Moreover, they are able to have an active vasoconstrictor effect and tone up cardiac activity with a clear increase in blood pressure.

Echinacea garden perennial: description and cultivation of a flower