A cactus called Echinocactus (Echinocactus) is a member of the Cactus family.

The homeland of the plant is the southwestern regions of the United States and northern Mexico. This is a very slow growing succulent, which is also known in scientific circles as a hedgehog cactus, since the Greek word “echinos” in translation into Russian means “hedgehog”.

The stem of this cactus is spherical, over time turning into a barrel-shaped, dark green color. At home, echinocactus reach 2-3 meters in height and up to 1 m in diameter. 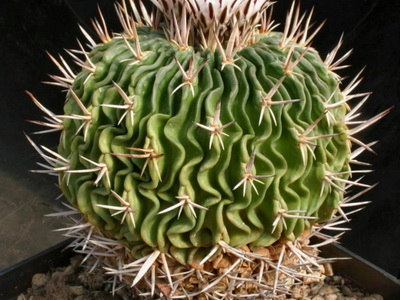 On the stem, the ribs are pronounced, high, their number depends on the age of the plant (for example, an adult specimen has 30-40 pieces). There are pubescent areoles on the ribs, merging into yellow “caps” in the upper part. Each of the areoles contains spines – powerful, slightly curved, up to 7 mm long.

In Echinocactus, the flowering period under natural conditions falls on the end of spring – the beginning of summer. Rarely blooms indoors.

Color appears only on those specimens that are over 20 years old and have a stem diameter of 40 cm or more. 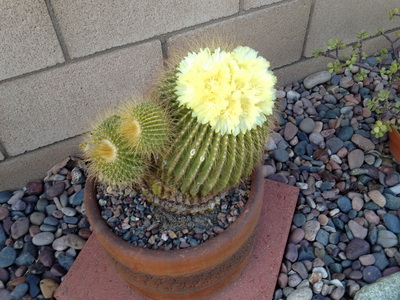 The flowers are pink or yellow, bell-shaped, with a felt-pubescent tube and lanceolate petals. The length of the flower can be about 7 cm, and the diameter is about 5 cm. The inflorescences are located at the top of the “cap”.

Echinocactus Gruzoni and photos of flowering of other types of cacti

Based on the appearance of plants, 6 species are distinguished among echinocactus: 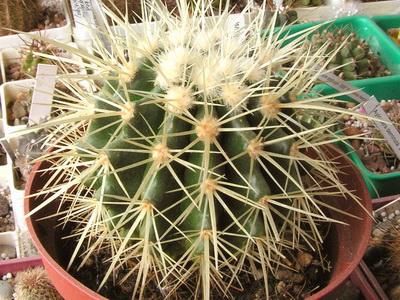 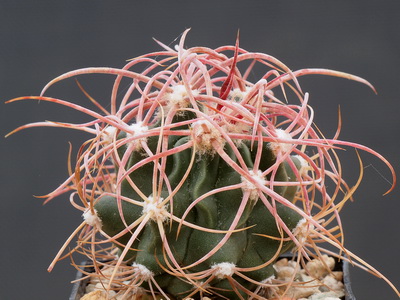 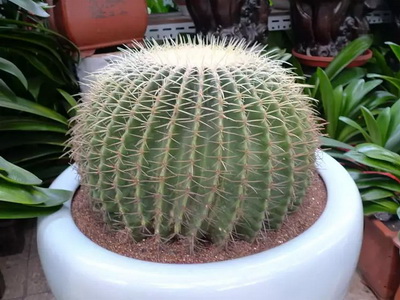 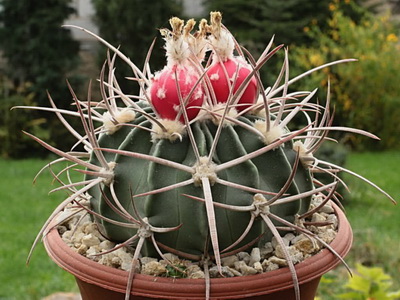 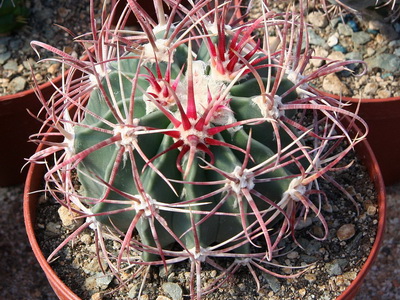 The following is a description of each of them.

The most popular is Gruzon’s echinocactus (E. grusonii). When grown at home, the stem of the culture grows up to 40 cm in diameter. It is covered with sharp spines of light yellow color, which have a curved or straight shape. The spines growing in the center and located crosswise can reach 5 cm in length, and the radial ones – 3 cm. There is a thick white bristle on the crown. The stem has 35 to 45 ribs.

The cactus of the species Echinocactus Gruzoni initially has a spherical shape, and after 13 to 15 years, it is stretched in length. In connection with such metamorphoses, it becomes like a barrel, for which it was dubbed the “golden barrel” by the common people. Some unscrupulous gardeners who grow plants for sale dye the needles red with a special dye, presenting the resulting specimens as a unique variety of this species. If you decide to buy such a “masterpiece”, be prepared for the fact that new spines will grow on it in yellow, since red plants do not exist.

Culture blooms at home rarely. But if, nevertheless, the flowering of Aeschinocactus Gruzoni occurs, then the inflorescences are colored, like needles, yellow – look at the photo below: 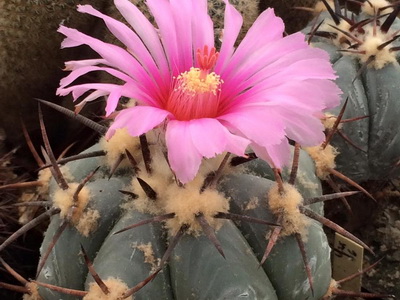 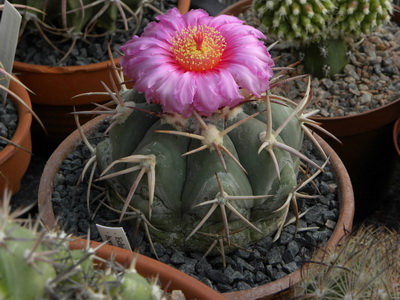 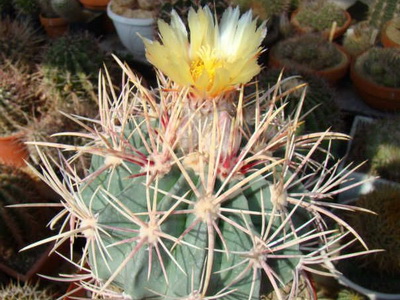 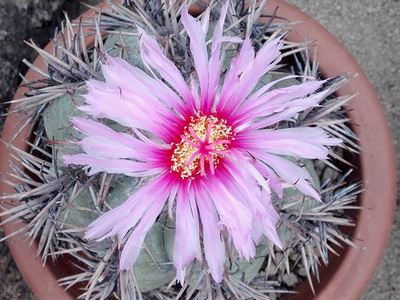 The polycephalus species forms groups of plants. It grows on average up to 0.7 m in height. There are from 15 to 20 ribs on the stem. The radial needles are about 5 cm long, and the central ones are about 6 cm long. The spines are flat, slightly curved, red-brown or yellow, appearing pink from a distance. Flowering is infrequent, it is a yellow corolla, the length of which is about 6 cm.

The flat-spined species grows in height from 1.5 to 2 m, and in width from 1 to 1.5 m. There are an average of 20 to 25 ribs on the stem. The length of the needles growing in the center (3-4 pieces) is about 4.5 cm, and the radial ones (5-6 pieces) are about 3.5 cm. The spines are gray, straight, flattened, have transverse shading. When grown indoors, the plant produces color – corollas located on the crown, reaching a length of 4 cm and painted in a bright shade of yellow.

What does echinocactus flat-spined look like during the flowering period, take a look at the photo: 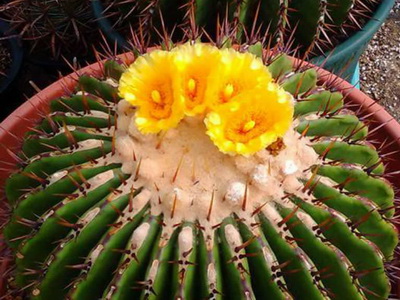 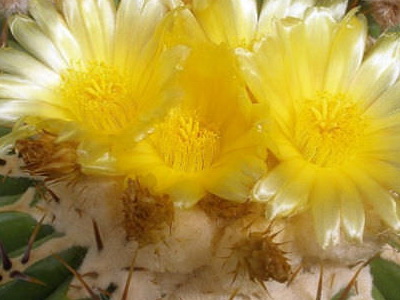 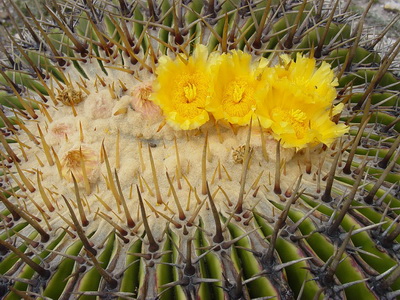 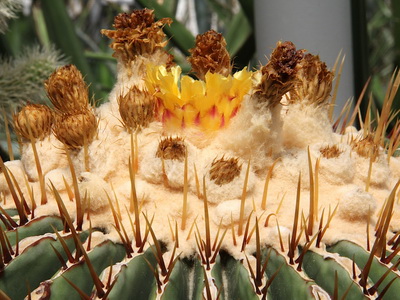 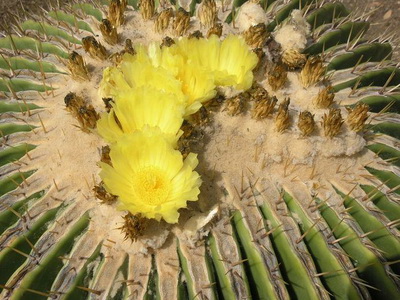 Horizontal echinocactus is also called flat-spherical. Its diameter can be about 23 cm. A feature is the presence of 10 to 13 spirally twisted ribs, 6 to 9 spines – round or flattened, having a slightly curved shape. Young specimens are distinguished by red needles, while adults are amber. In this regard, the plant is popularly called “red echinocactus”. Unlike the previous species, it blooms with lilac-red corollas.

Texas Echinocactus has a flat-spherical shape, its diameter is about 30 cm, and its height is up to 20 cm. There are 13 to 24 spines on the stem, and white fluff on the upper part. The length of the central needle is up to 6 cm, and the radial spines are up to 4 cm.

Parry species can grow up to 30 cm in height. The stem is gray-blue, has 13 to 15 ribs. There are 6 to 11 radial spines and 4 growing in the center about 10 cm long. The needles are curved, brown-pink in young specimens and white in adults. Flowering – corollas of a golden hue.

How to care for echinocactus at home: watering and feeding

At home, caring for Echinocactus Gruzoni, as well as for representatives of other species, will not take much time and effort. This is a very hardy and easy to care for plant. The only exception is Parry’s species – growing it at home is complicated by the fact that the culture has a low level of germination, and the root system is prone to decay.

The requirements for environmental conditions are as follows: the place for keeping echinocactus should be as sunny and ventilated as possible throughout the year. The ideal location of a flowerpot with a flower is on the windowsill of the south window. With the advent of March, the plant needs to be shaded. So awakening after winter dormancy will be painless. 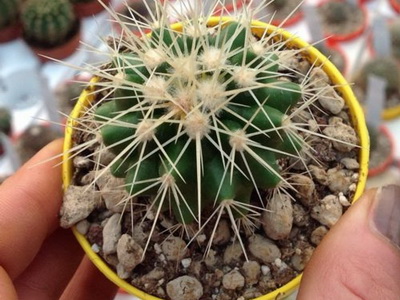 Caring for echinocactus at home provides for the need to maintain a temperature of at least +8 ° C. The optimum temperature in winter is 10-12 ° C, while in summer it can be taken out to a balcony or loggia, since temperature fluctuations in this case will not pose a threat to a representative of the southern latitudes.

Since in the subtropical climate, which is natural for the crop, the humidity is high, the plant needs to be sprayed in summer, but not in direct sun. You need to carry out the procedure 1 time in 30 days, while making sure that the drops do not fall on the flower corollas.

When growing echinocactus, it is important to observe the irrigation regime. If the soil dries out, the plant will shrivel. Excess moisture will cause the root system to rot, and then the stem. In summer, it is recommended to water the plant no more than 1 time in 14 days. From September, watering should be halved, and in winter it should be stopped if the temperature in the room does not exceed +15 ° С. Irrigation should be resumed in March, when the crop comes out of winter dormancy.

From April to September, the plant needs top dressing. To do this, use special mixtures prepared for cacti. If you are interested in how to properly care for echinocactus at home, remember the rule: top dressing should be done 1 time in 21 days.

How to transplant Echinocactus Gruzoni or another type of plant

Young plants (up to 4-5 years old) must be replanted annually, adults – after 1-2 years. As the cactus matures, the need for a transplant decreases. One of the reasons is the high level of sensitivity of the roots and their tendency to damage, and the second is the difficulty of transferring a prickly overgrown specimen to a new flowerpot.

It is necessary to choose a durable pot, slightly larger in diameter than the previous one, which can withstand a heavy massive stem. Drainage should be laid at the bottom. Before transplanting Echinocactus Gruzoni or another type of plant, you need to prepare the soil.

This is a substrate – special for cacti, consisting of:

To the question of how to transplant echinocactus from a flowerpot to a flowerpot, professionals answer: you should make a loop of strong wire, thread it between the thorns and transfer the plant to another pot.

The most common way is by seeds. They germinate very slowly. You need to sow them as described on the package – depending on the type of plant.

Reproduction by children is also possible, which are separated from the mother stem and planted in separate flowerpots. But kids are rare. How to care for a transplanted Echinocactus Gruzoni or another type of it is a question that does not imply a complicated answer: you just need to follow the recommendations outlined above.

Diseases and pests of echinocactus

The diseases that echinocactus suffers from (rot, spotting, wilting, drying) are associated either with a violation of the previously described requirements for growing conditions, or with the presence of pests such as a mealybug, cactus scale insect, and spider mite. In order for the plant to recover, in the first case it is necessary to provide it with proper care, and in the second – to fight parasites. As a sanitary measure, you can use a warm shower, after covering the soil in the pot with a film. If he did not help, it is necessary to apply Actellik or other insecticides.

Evaluate once again what Gruzoni echinocactus and representatives of other species look like in the photo to decide which green “pet” can harmoniously complement your home greenhouse: 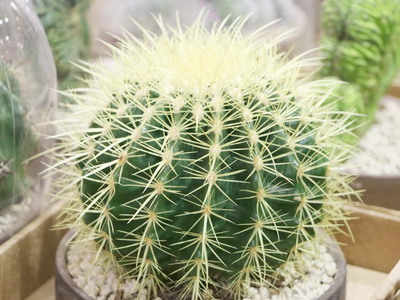 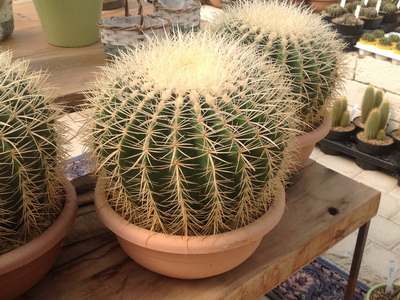 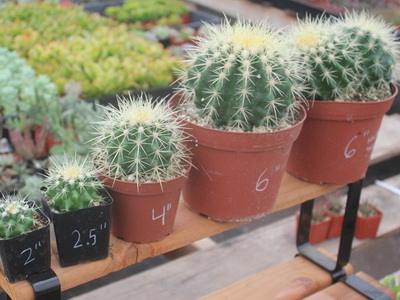 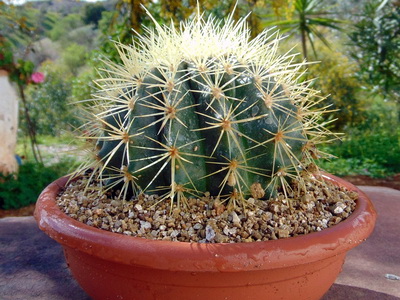 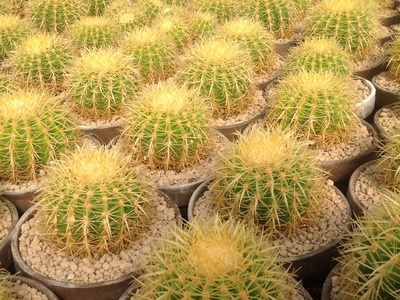