The tree peony is one of the brightest ornamental plants in the garden. This culture is valued for its lush flowering, pleasant aroma of buds, ease of care. The variety of species and varieties makes it possible to make unusual, colorful compositions in the flower garden. The varieties of this flowering shrub, the features of its cultivation will be discussed in the article. 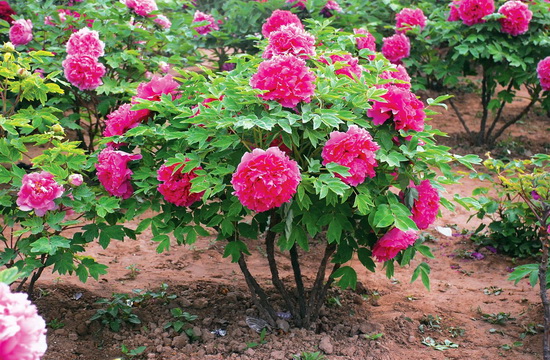 Tree peony is a perennial deciduous shrub 120 – 180 cm high. Some specimens can reach 200 cm. The stems are straight, strong, light brown, gradually woody. Over time, the diameter of their circumference increases. With the onset of autumn, the stems do not fade. Every year they branch more and more, as a result of which the bush acquires a rounded shape.

The leaves are large, double-pinnate, dense, smooth, dark green above, light green on the underside.

Single buds form at the tops of the stems, resembling a ball. The diameter of the opened flower is 15 – 20 cm. There are double, semi-double and simple varieties of this culture. The color of the buds can be burgundy, white, pink, purple, yellow. 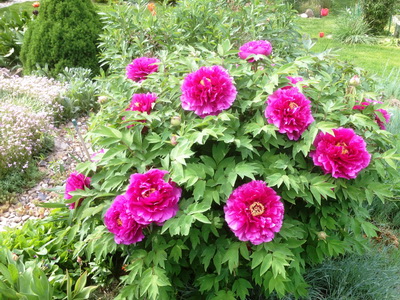 There are also two color varieties. The older the bush, the more abundant its flowering. On one perennial plant, about 50 – 70 flowers can form. Flowering occurs in late May – early June, but some varieties later. The buds bloom on the bush for 15 – 20 days.

The shrub has a highly developed, widely spread root system, so it is necessary to plant it at a distance of 1 – 1.5 m from other plants.

The lifespan of a tree peony depends on how correctly and systematically it will be cared for. In good conditions, the plant is able to grow and bloom for 40 years or more.

The description of a tree-like peony accompanies a photo that shows the characteristic features of this culture: 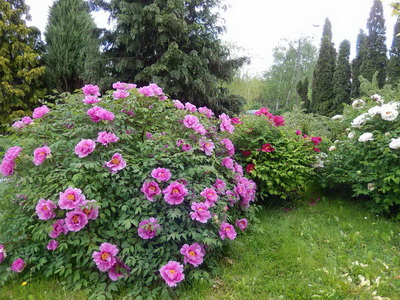 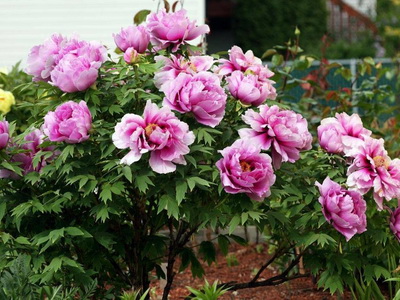 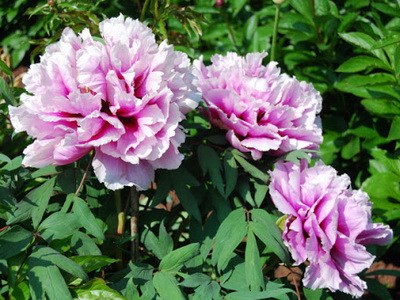 Breeders have obtained a large number of varieties of this flowering plant. The most popular of them are described below.

“Red Giant” is a low shrub that reaches 1 – 1.5 m in height. At the ends of the stems, large terry inflorescences of a crimson hue are formed. 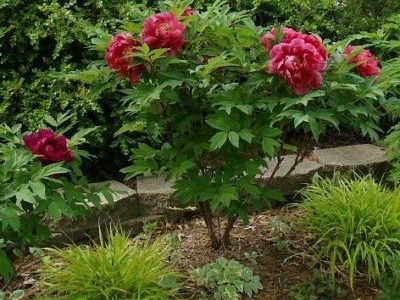 “Scarlet Sails” – an early flowering variety with lush red flowers with a diameter of 17 cm. The height of a perennial bush reaches 200 cm. During the flowering period, about 60 buds bloom on the plant. Leaf plates are large, dark green. 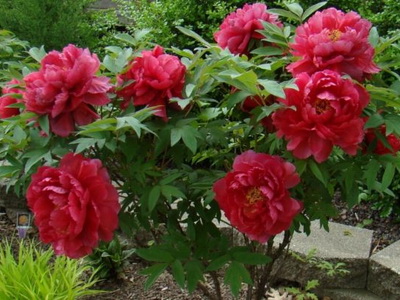 “Kinko” – a bush with numerous branched stems. Reaches up to 150 cm in height. Differs in large terry inflorescences with a diameter of 17 – 20 cm. The variety is valued for the golden color of flowers with a pale pink border. The plant is whimsical to the conditions of detention, demanding on the composition of the soil. 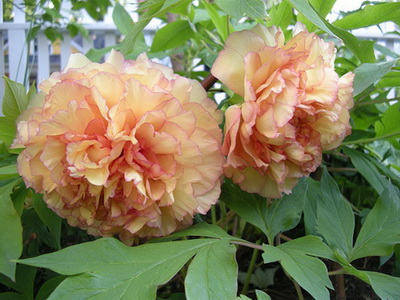 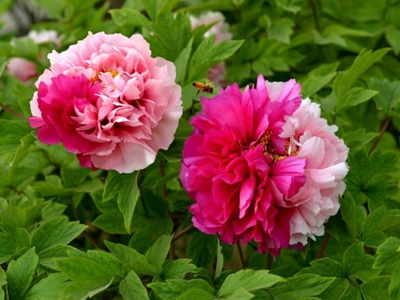 “Blue Sapphire” – one of the best varieties of tree peony with bluish-pink inflorescences of medium size. There are purple spots in the central part of the bud. The plant has a fast growth rate. 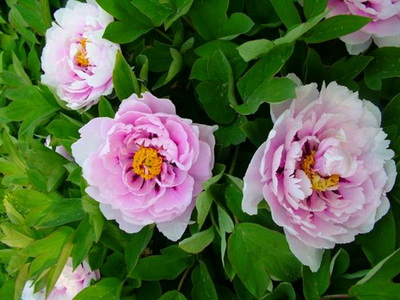 “Sisters Kiao” – a medium-sized bush with a wide crown strewn with buds with a diameter of 14 cm. Bicolor petals. One side is white or light pink, the other is red. The central part of the flower is golden yellow. The variety looks very expressive and elegant. 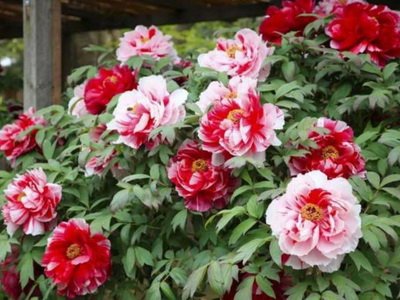 “Secret Passion” – a plant 120 – 150 cm high with straight stems, in the upper part of which purple-red buds are formed. Flowers harmoniously look in combination with large dark green leaves. 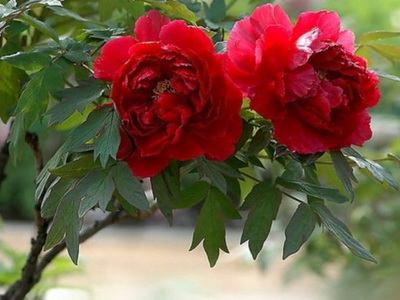 “The smell of a lily” is a tall variety with boiling white flowers, which are formed on the bush in large quantities during the flowering period. The buds have a rich pleasant aroma. 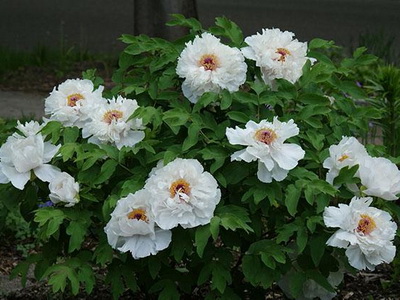 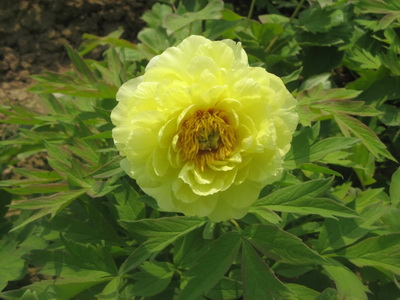 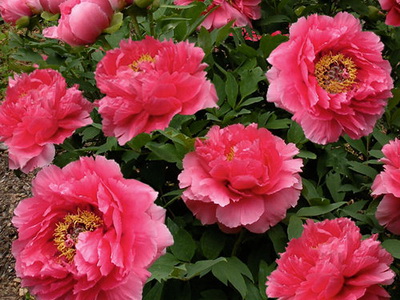 “Coral Island” – a bush with branching shoots, the height and width of which is 1.5 m. The flowers are lush crowned red, 15 cm in diameter. The variety blooms long and profusely, starting from the end of June. 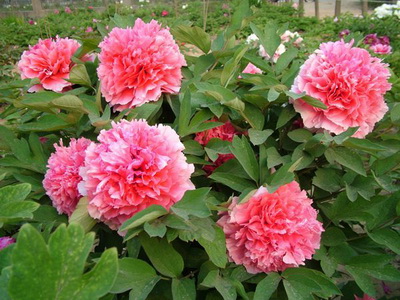 Above, you got acquainted with the names and descriptions of the best varieties of tree peony, and now look at the photo of each of them: 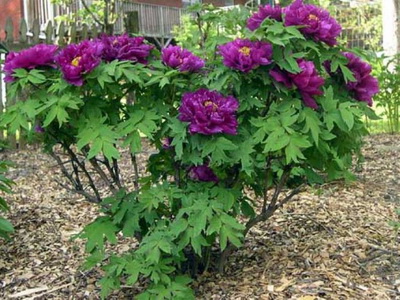 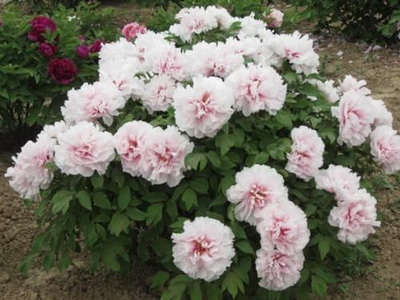 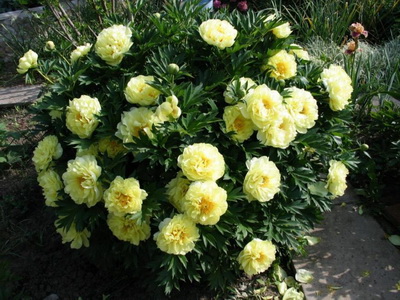 Recommendations for the selection and storage of seedlings

In order for a seedling to successfully take root, you should seriously consider its choice when buying. It must be healthy, have thick, strong, intact stems with buds. Sleeping buds should be present on the root collar.

If possible, it is better to purchase seedlings with an open root system, as you can inspect it and make sure that the roots are whole, elastic, strong, yellowish in color.

After buying a seedling in the spring, the roots should be kept in a fungicide solution and planted in the ground only after treatment. In the first year of life, the plant will use internal reserves, and in the second year it will fully recover.

If seedlings are purchased in early spring, they are planted in a large pot. With the onset of warm days, they are taken out into the garden and placed in the soil along with the container. In the event of frost, you can quickly dig up and bring the plants into the house. 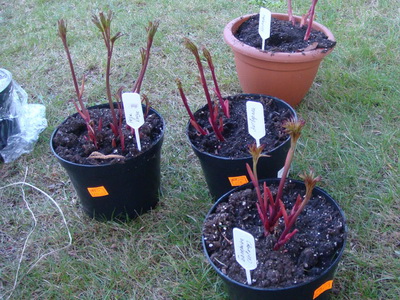 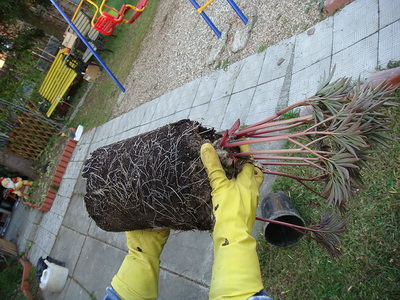 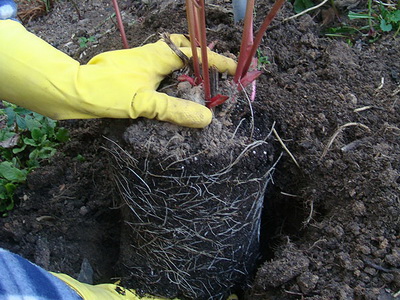 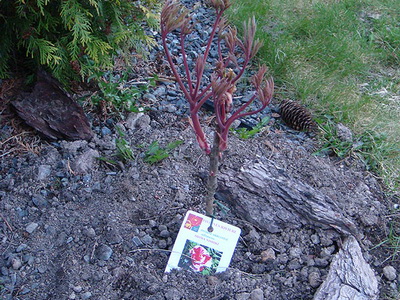 If the seedlings were bought in late autumn or winter, they are dug in containers filled with soil and stored in a bright, cool place before planting in a flower garden.

Before planting a tree peony seedling, you need to choose the right place for it, the success of cultivation, the intensity of growth and the abundance of bud formation will largely depend on this.

For planting shrubs, it is recommended to choose open, sunlit places in the garden, protected from gusty winds and drafts. The area where this crop will grow should not be located with a close occurrence of groundwater.

Tree peony prefers loam and does not develop well in substrates with a high content of sand. If the site has sandy soil, it will be necessary to add a mixture of clay, peat, soddy soil, and leaf humus during digging.

Take the components in equal parts. The tree peony does not tolerate acidic soils, therefore, if necessary, a small amount of lime must be added to normalize the acidity. 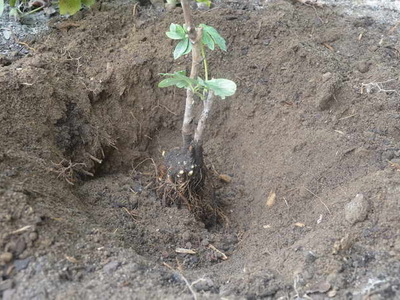 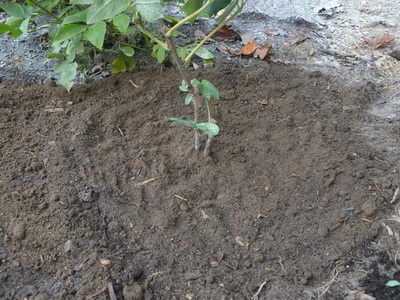 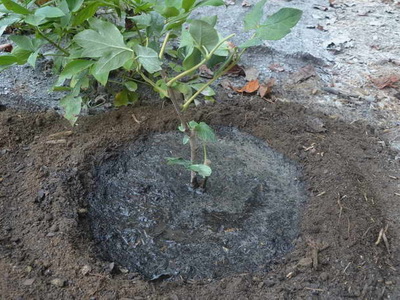 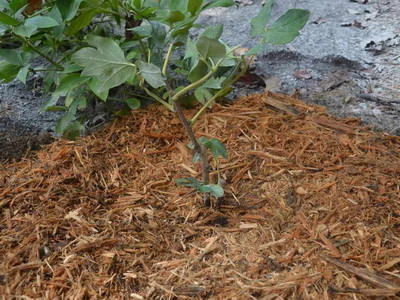 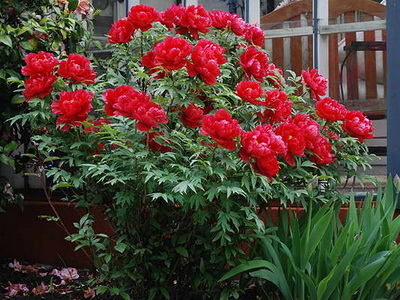 The most suitable time for planting a tree peony in the ground is the end of August – the first half of September. Having managed to plant a plant in the specified period, you can be sure that before the start of frost it will take root and get a little stronger.

Before planting, they dig holes with a depth of 60 – 70 cm and the same diameter. Drainage is laid at the bottom, which is used as a broken brick, pebbles or crushed stone. A little earth is poured on top and the seedling is carefully placed, spreading the roots.

After planting, half a bucket of water is poured into each hole, the earth is filled up to the upper edge and the area around the plant is rammed. The distance between the bushes should be 1.5 – 2 m. This is due to the fact that perennial specimens grow strongly and require a lot of space.

Despite the unpretentiousness of the tree peony, care in the first years after planting should be carried out regularly. Do not neglect the basic rules for its breeding in order to achieve lush, long flowering.

At the beginning of the appearance of foliage, the bush is sprayed with copper sulfate or Bordeaux mixture to prevent the appearance of gray rot or rust. Re-treatment is performed after 2 weeks. At the end of flowering, the culture is treated with fungicide solutions.

When transplanting, the bush is carefully dug up, the roots are washed under running water, after which the damaged areas are removed. The places of cuts are treated with crushed coal. Overgrown bushes are divided into parts so that each division has healthy roots and replacement buds. Plants are buried in pre-prepared pits and sprinkled with earth.

This culture is not subject to the invasion of pests and is resistant to various diseases. Nevertheless, as a result of improper or irregular care, the florist may encounter problems that are associated with the health of the flower.

If the plant is constantly in the shade, there is a high probability of accumulation of moisture in the soil, which leads to gray rot. The disease manifests itself in the form of a gray plaque on the foliage. Previously healthy shoots become soft, begin to rot. To eliminate the fungus, reduce the frequency of watering and treat the bush with copper sulphate.

Rust appears on the bush quite often as a result of its strong thickening. You can recognize the disease by brown-purple spots on the leaves. Soon the foliage curls, dries up and falls off.

To eliminate rust, the affected areas are removed. To prevent its appearance, prophylactic pruning of the stems thickening the bush is carried out. In March, the plant is treated with nitrofen.

Ring-shaped mosaic also sometimes affects the bush. This disease is evidenced by yellow, green spots and stripes on the surface of the leaves of a tree peony. Gradually, they begin to dry out, which greatly spoils the appearance of the shrub. In this case, spraying with the Lamador fungicide, which effectively eliminates the virus, will help. 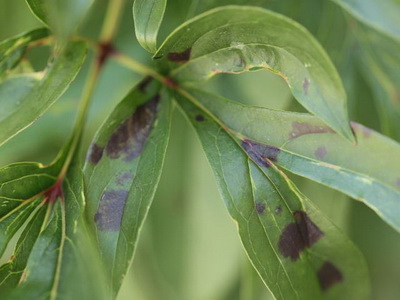 Growing a tree-like peony in a personal plot, as you can see, is not at all difficult. One has only not to forget about this luxurious flower, to take care of it. In response, he will delight the eye with lush flowering and decorate the garden.