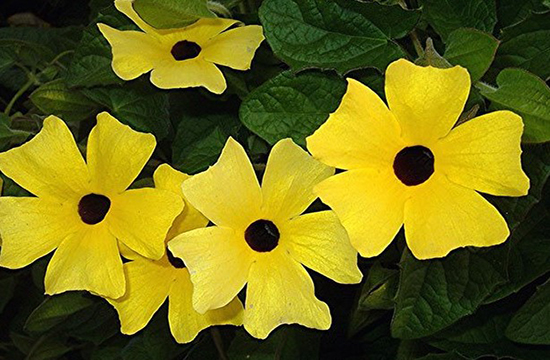 Thunbergia (Thunbergia)belongs to the Acanthus family. This is a genus widespread throughout the tropical zone of Asia and Africa, numbering about 200 species.

The flower “tunbergia” got its name in honor of the Swedish naturalist-researcher of flora and fauna Thunberg. The people call the plant “black Suzanne” due to the fact that its central part is dark purple, almost charcoal in color.

This culture is grown both at home and in the garden. It is an upright shrub, herbaceous plant or liana. Leaves ovate, pointed, opposite, 5-7 cm long, with slight pubescence on the surface. 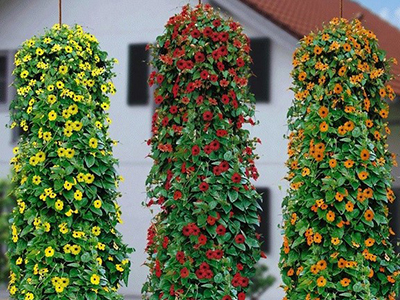 Look at the following photos of flowers tunbergia and you will see that her flowers are beautiful, large (up to 4 cm) in diameter, funnel-shaped, on long peduncles. 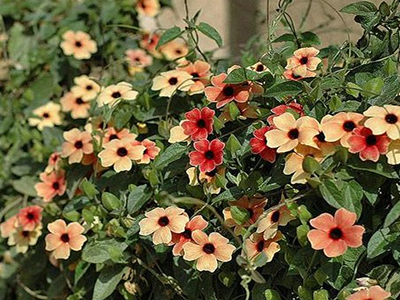 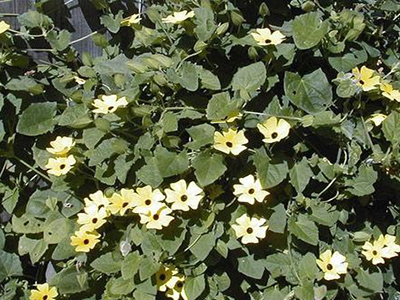 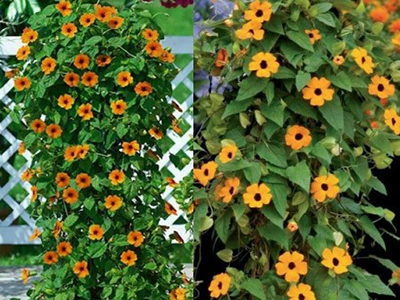 They can be single or collected in inflorescences.

The color of the flowers is white, bright yellow, red, lilac, lilac, purple, blue, orange. Flowering is plentiful, begins in the summer in mid-July, ends in September. Some varieties exude a strong pleasant aroma. 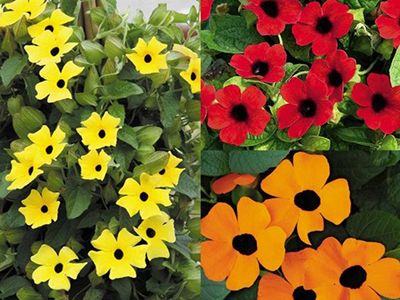 In decorative floriculture, it is used for vertical gardening. In room conditions, this plant is a perennial. 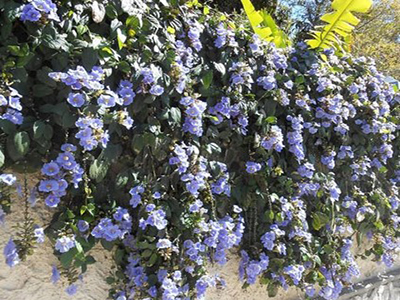 Description of types of tunbergia 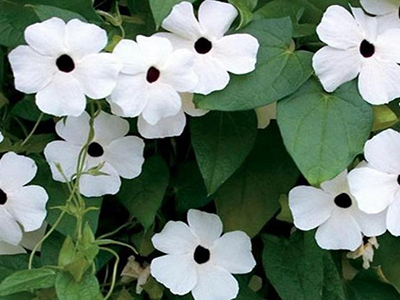 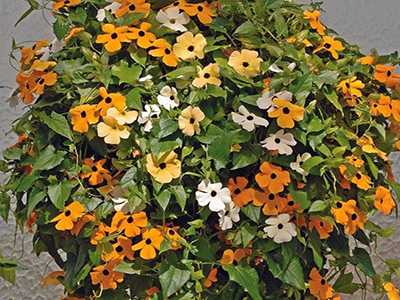 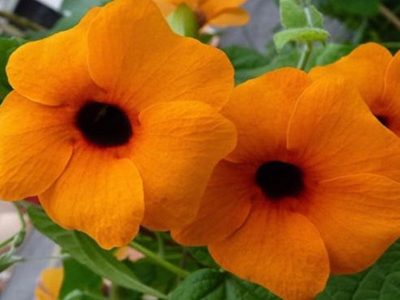 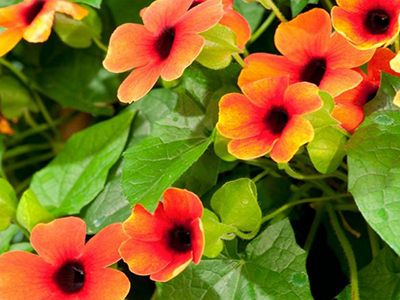 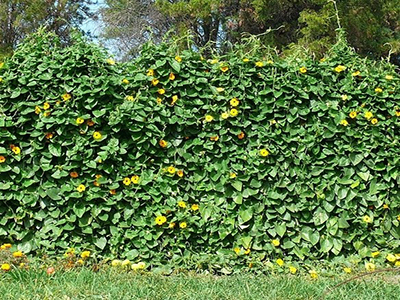 Below is a detailed description of some types of tunbergia suitable for growing at home and in the garden. 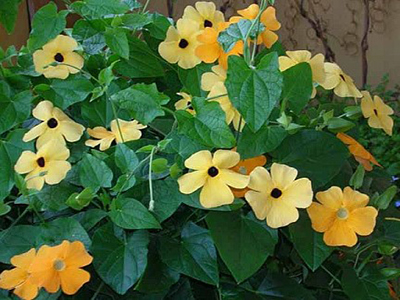 Thunbergia erect (T. erecta) – a flowering shrub plant up to 1.8 m high, with a slightly ribbed stem. Leaves up to 6 cm long and 4 cm wide, opposite, sessile, lanceolate or ovate, wavy or indistinctly serrated along the edge. Flowers up to 1 cm long, axillary, solitary, with serrated calyx. The corolla is bright purple, the tube is white on the outside, yellow on the inside. The flowering period is from May to August. The fruit is a box.

Fragrant Thunbergia (T. fragrans) – a flowering herbaceous liana-like plant. Stems up to 6 m long, lignified, ribbed, branching, pubescent. Leaves up to 7 cm long, opposite, triangular or arrow-shaped, with a sharp apex, dark green on the upper side, lighter on the lower side. Flowers up to 5 cm in diameter, solitary, axillary; corolla white; calyx small, with numerous whitish teeth. 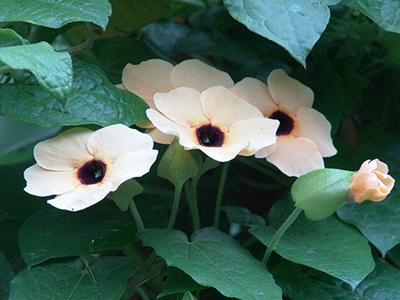 Thunbergia grandiflora – a plant with rounded triangular leaves with a pointed tip. The underside of the leaf is covered with fluff. Bright blue flowers with small white spots are collected in racemose inflorescences;

How to grow indoor tunbergia

Caring for tunbergia is considered to be of medium difficulty, since this crop is demanding on air humidity, watering and soil composition. In practice, flower growers manage to successfully grow a vine for several years, watching its bright, lush flowering.
Location. Thunbergia loves light, but it must be protected from direct sunlight. For her, windows facing both the western and southeastern sides, or the south, but with shading from direct sunlight, are suitable. When caring for tunbergia at home, it should be borne in mind that this culture does not tolerate extreme heat well. North windows are not recommended, as the plant will not have enough sunlight, artificial lighting will be required.
Temperature. The temperature for successful cultivation of tunbergia should be 20 – 25 degrees, in winter – 12-16 ° C. This flower does not tolerate drafts, but grows well and develops in the fresh air. Many gardeners, knowing this feature of the plant, put it on the balcony or in the garden during the warm season.
Humidity and watering. High humidity is required; in a dry room, buds and leaves fall off the flower. It is necessary to spray at the usual time 2 times a week, on hot days daily. This work is best done in the evening, using a spray bottle with soft settled water. This procedure will help maintain a fresh and blooming appearance of the flower, and will also serve as a prevention of various diseases.
Growing tunbergia, as well as caring for it during the growth period, changes somewhat, with regard to watering. In spring and summer, it is required to water the flower abundantly, preventing the earthen clod from drying out, while in winter it is noticeably reduced. The soil in the pot should always be moist, but not flooded. Excessive watering is harmful because it leads to rotting of the roots.
substrate. The substrate is soddy land, humus and sand (2:2:1). The soil should be light, nutritious, with a good layer of drainage. When transplanting, it is recommended to add crushed pine bark to it in a small amount, or coconut substrate at the rate of 1 handful per 0.5 bucket.
A large container or planting a greenhouse in the ground is a necessary condition for the formation of buds.
Top dressing. Thunbergia at home is fed with liquid mineral fertilizer throughout the spring-summer season. During flowering, top dressing should not be applied, as this will have a bad effect on further growth and bud formation.
Transfer. Thunbergia is transplanted annually, choosing a not very wide and deep pot for this. A layer of drainage is laid at the bottom, then the soil is poured. The plant is buried, sprinkled with earth and watered.
Despite the fact that indoor tunbergia is considered a perennial, many flower growers annually throw away faded specimens, because after abundant flowering and wintering it weakens and next year can no longer give the same splendor and rich flowering.
Winged Thunbergia is the most unpretentious. It can be renewed every year from seeds. Tunbergia winged does not require tricks for the appearance of buds and flowers.

How to plant tunergia with seeds and cuttings

Cuttings and seeds. Most often, tunbergia is grown from seeds, for which the flowers are carefully pollinated with a brush.
Before sowing, the seeds are treated with a growth stimulator, for example, epin. Sowing is carried out in late February – early March in pre-prepared containers with a substrate consisting of soddy soil, sand and peat, taken in equal parts. A mixture of sand, humus and leafy soil is also suitable, in equal proportions. Seeds are sown and sprinkled with a small layer of the substrate, then sprayed with a spray gun.
After planting the tunbergia, the pots with crops are covered with a film and cleaned in a warm place with diffused sunlight. For rapid growth, crops are ventilated daily, removing the film for 2 to 3 hours, and watered. With proper care, seedlings will appear in 1 – 1.5 weeks. After that, the film can be removed and care continued until the plants grow, that is, until a pair of leaves forms on them. The grown seedlings must be thinned out, leaving the strongest.
In order for the cultivation of tunbergia seeds at home to be successful and the grown flowers to be bushy and lush, it is recommended to pinch them after they grow to 13 – 15 cm. If the grower wants to get flowers with a dense green mass, fertilizing with nitrogen-containing fertilizers. If the priority is the abundant and long flowering of tunbergia, it is impossible to feed the crops on the contrary.
Grown up individuals are transplanted into separate medium-sized pots.
When propagated by cuttings at the end of summer, green cuttings up to 10 cm long are cut. Experienced flower growers, before planting tunbergia, cuts are treated with phytohormones, this will help the flower get used to new conditions faster. After that, the cuttings are placed in a moistened substrate (see substrate for seeds) and covered with a film. Seedlings are cleaned in a warm place with an air temperature of 20 – 24 degrees. For the winter they are removed to a cool place with a temperature of about 12 degrees, but not lower than 10 degrees.
Most often, whiteflies and scale insects settle on the plant. If the air in the room is too dry, then the edges of the leaves begin to dry out. If moisture gets on the lower part of the leaves, rot spots may appear.
Many problems in breeding it can be avoided by following all the rules for planting and caring for tunbergia at home, having previously read the information about this flower.