Skerda or crepis (lat. Crepis) is a member of the Aster family, grown as a perennial and annual. The genus includes more than 250 species, but most of them are considered weeds. Only rare varieties are decorative, thanks to which they have found application in landscape design. In addition, the herbaceous plant skerda is valued for its medicinal properties, it is used to treat diseases of the gastrointestinal tract, heal wounds and burns. 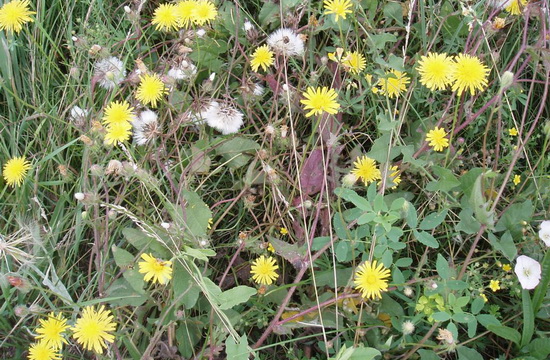 Skerda or crepis is a grass with long, thin, flexible, weakly branching stems from 7 to 120 cm high.

Some specimens reach 150 cm. The shoots are bare, or with small hairs on the surface. Basal leaf plates are lanceolate, with large rounded teeth, light or deep green in color. assembled into outlets. Stem leaves oblong-oval, entire, sessile. Inflorescences are large single baskets or corymbs. Formed at the tops of the stems, 1-4 pieces or more. Outwardly, the skerda flower resembles a dandelion, but unlike it, the color of the basket can be not only yellow, but also pale pink.

Most of the representatives of the genus begin to bloom in the first half of June, but there are some specimens that bloom in the middle of summer. Crepis blooms for 4 weeks.

The distribution area of the plant is very wide. It grows in Southern Europe, Asia, in North America, in India. It prefers to grow in open areas: on the edges of forests, fields, meadows, sometimes found near water bodies.

A photo of a flower is attached to the description of skerda (crepis), demonstrating the distinctive features of this culture.

Cultivation of crepis on personal plots people began to engage in not so long ago, since earlier this grass was considered a weed. To date, some species are bred for medicinal and decorative purposes, as a fodder crop. The most popular varieties of skerda are described below.

Roofing skerda (Crepis tectorum) – an annual plant up to 0.7 m high, with a straight branching or slightly pubescent stem. 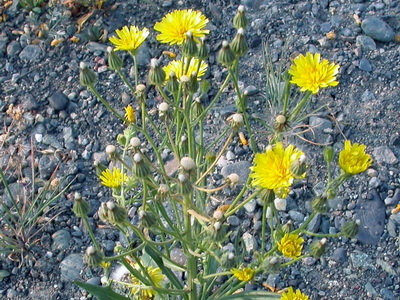 The leaves are oblong-oval, arranged alternately. In the upper part of the shoot, the leaf plates are entire, in the lower part they are pinnately dissected. Inflorescences – panicles or shields of lemon color. Flowering lasts from the beginning of summer until the onset of autumn days.

Siberian skerda (Crepis sibirica) – herbaceous perennial, the height of which can reach 50 – 120 cm. The shoots are solitary, with strong branching, ribbed, covered with a small pile. 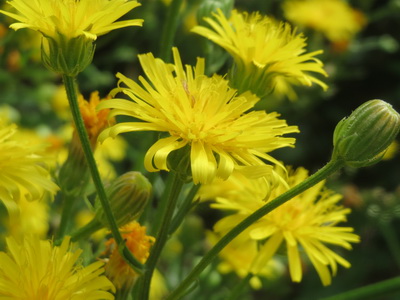 The leaves are oblanceolate or elliptical, with small hairs on the underside. The length of the leaf plate is 40 cm, the width is 7 cm. The flowers are collected in a complex corymbose inflorescence. Their color is rich yellow. This culture begins to bloom in June. Flowering time – 3 months.

Marsh skerda (Crepis paludosa) grown as a perennial crop, the ascending shoots of which grow up to 80 cm. The bush consists of thin, rarely branched, ribbed hollow branches. 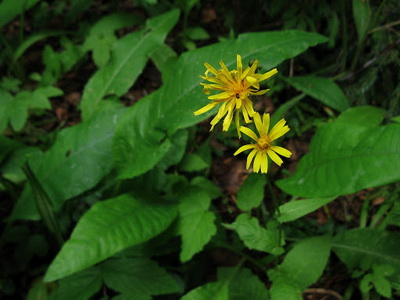 The leaves located at the base of the stem are large, spatulate, pointed at the base, with small and sparse teeth along the edge. The leaf plates at the top of the plant are smaller than those at the bottom. They are spear-shaped or lanceolate. The surface of the leaf is covered with a network of small, well-drawn veins. Inflorescences – baskets with yellow reed flowers. The flowering of the marsh skerda begins in the last month of spring and lasts throughout the summer season.

Golden skerda (Crepis augea). It is a perennial bush, consisting of several thin, unbranched shoots 0.3 m long. The width of the bush is equal to the length of the stems. 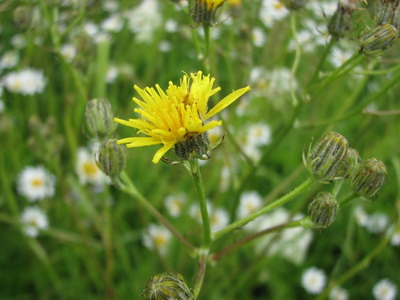 The leaves of this species are oval, with small teeth along the edge, rounded at the base, collected in a basal rosette. The top of the leaf plate is wider than the bottom. The inflorescence is presented in the form of a basket of lemon-yellow color. Flowering can be admired from mid-summer to the arrival of autumn.

Gray skerda (Crepis mcana). A low-growing perennial bush, the height of which reaches no more than 0.2 m. It forms small green flowering mats in the garden. The diameter of the bush is 25 – 30 cm. 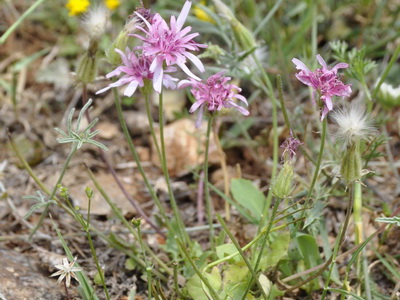 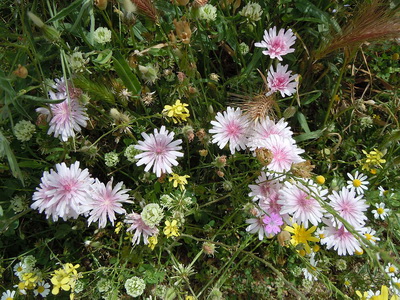 The leaves are elliptical, with sparse teeth, 13-15 cm long, light green in color. Formed at the bottom of the shoots, representing a lush rosette. Inflorescences – single baskets with a diameter of 5 – 6 cm, pale pink.

Saffron-red skerda (Crepis bocconii). A plant grown as a perennial. The bush reaches a height of 20 – 60 cm. 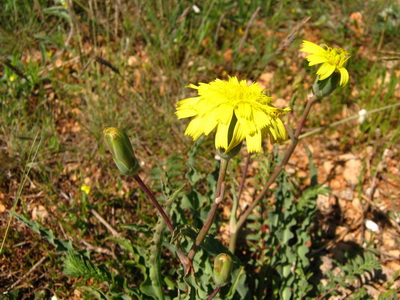 On weakly branching shoots, there are leaf rosettes and stem leaves of an obovate elongated shape. At the tops of the stems, yellow baskets with a diameter of 5 cm are formed.

Poppy-leaved skerda (Crepis rhocadifolia). It is grown as an annual and biennial crop. It is a bush, the height of which varies from 10 to 70 cm. The shoots are straight, slightly branched, covered with a short pile. 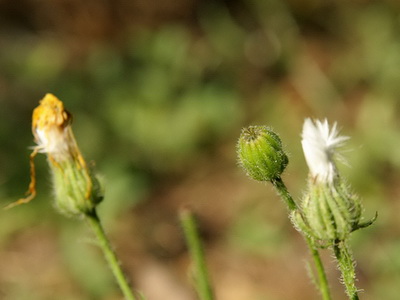 There is nothing easier than getting a new crepis plant, since it is propagated mainly by seeds, and the seed material of this crop has 100% germination. Seeds can be planted immediately on the site, as soon as frost has passed. Open areas are suitable for growing skerda, since the culture is photophilous and does not develop well with a lack of light.

For planting in the soil, small depressions are made, where 2-3 seeds are placed. The distance between the pits should be at least 20 cm. After 10 – 15 days, green sprouts will hatch from the ground. Young plants are still very fragile and vulnerable, so at night they must be covered with a film that serves as protection from possible frosts. Flowering of grown bushes can be observed in mid-June.

Some gardeners in March sow seeds for seedlings in small pots filled with a nutrient substrate. The containers with crops are covered with polyethylene and put on the windowsill, where the seedlings will receive enough sunlight. The room where the crops are kept should be warm. It is important to water the seedlings on time to prevent the soil from drying out. With the advent of the third leaf, the seedlings dive, and with the onset of warm spring days, they are transplanted to the site in the ground, not forgetting about shelter for the night.

Crepis is one of the most unpretentious to care and hardy plants to harsh conditions. However, if you want to grow a lush flowering healthy bush on the site, you should take a little care of it.

Watering. Despite the fact that skerda is highly resistant to drought, it is necessary to water the plant periodically, especially on hot days. With a prolonged lack of moisture, the leaves and inflorescences begin to dry out and fade. The bush loses its attractiveness. Frequent watering should also be avoided, since the root system of this crop does not tolerate stagnant moisture.

Fertilizer. Experienced gardeners recommend feeding it with a mineral complex once a month for growing crepis for decorative purposes. The first top dressing should be made a couple of weeks after planting on the site, the second – during the formation of inflorescences, the third – during the flowering period.

Other care. In order for the crepis bushes to be healthy and look well-groomed, it is necessary to regularly remove weeds around them, loosen the soil, thereby ensuring oxygen access to the roots.

Thus, it is clear that caring for this plant takes a minimum of time and effort. It is enough to carry out simple manipulations to maintain the freshness, splendor and decorative appearance of the bush.

Skerda is valued for its ability to grow in almost any corner of the garden, regardless of the composition of the soil. It is used to beautifully fill voids on the territory of the site, to compose original compositions from ornamental plants, to which it will add airiness and grace. The culture is suitable for creating rock gardens, decorating rocky gardens, and decorating borders. 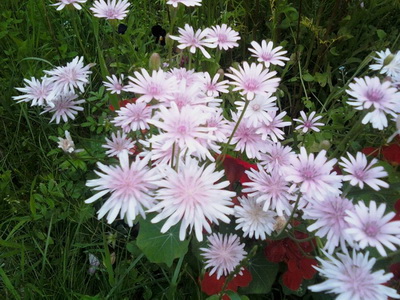 Krepis harmoniously looks with many garden plants, is able to take its special place in the flower garden. The most harmonious neighbors for him will be large daisies, cornflowers, lilies of the valley, purslane, cosmea and other small variegated flowers. The most valuable in ornamental gardening is the red skerda, less often the Siberian skerda.