Rules for pruning roses in spring (with photo)

About roses
Last modified: 28.06.2022
0
HomeAbout rosesRules for pruning roses in spring (with photo)

If you do not know how to cut roses correctly, first decide for what purpose you are going to carry out this procedure – to give the bushes a decorative effect or to remove wilted inflorescences. At different times of the year, pruning roses is not the same – each season has its own way of holding these events. How to prune roses also depends on the type of flowers: for hybrid tea and park roses, long pruning is used, and for curly roses, short pruning is used.

First of all, you need to arm yourself with secateurs and gloves that will help avoid damage to your hands. Before you cut climbing roses, you need to purchase a long-handled lopper – with it it will be easy to get to hard-to-reach branches, as well as get rid of faded buds. It is recommended to wash the tools after pruning each individual bush, in which case the spread of the disease can be prevented if one of them was infected.

According to the rules for pruning roses, it is recommended to make cuts at an angle of 45 °, while they should be neat, without torn or chewed edges. When pruning, dry, broken and affected parts of roses, as well as thin and weak shoots, should be removed. If seedlings have whitened and thin shoots after storage, they must also be cut. On grafted roses, it is necessary to cut off the growth that appears below the rootstock. 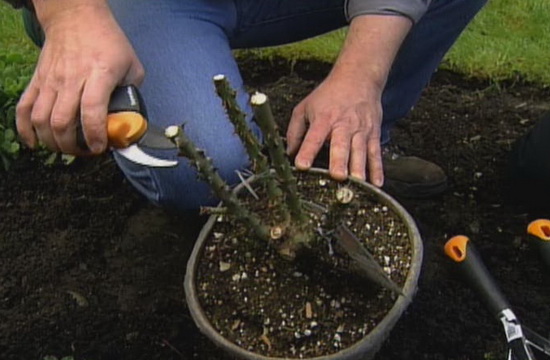 As you can see in the photo, after pruning the roses, the cut points are treated with an antiseptic, you can use a solution of brilliant green.

How to prune climbing and other roses

There are the following types of rose pruning, which depend on the time and type of roses.

Long pruning is used when planting seedlings and after cleaning the winter shelter. Suitable for hybrid tea and garden roses.

Medium pruning is used after the roses have faded. During its implementation, the shoot is cut off above the first developed bud, due to which the growth of new shoots is stimulated. In addition, with the help of medium pruning, a bush is formed.

Cut rose shoots at the border of healthy tissue. The dead shoot has a brown core, while the healthy part has a white core. Make a cut with the transfer of the shoot to the outer bud so that the branches do not grow in the middle of the crown. In drooping roses, sometimes the shoots are cut to the inner bud to give them vertical growth.

3. Short pruning is used during the spring planting of seedlings. It is suitable for climbing roses if it is necessary to stimulate the growth of new shoots so that they bloom the next year.

4. Combined pruning is used, if necessary, to form bushes of some varieties of roses (primarily the Floribunda species ). Thanks to this type of pruning, the bush during the flowering period looks more elegant.

5. Sanitary pruning is necessary as a preventive measure to combat various diseases . When it is carried out, the affected, weak, dry and thin branches are removed.

All cut parts of plants are burned or laid in a compost heap.

Most gardeners prefer to plant perennial tall flowers: firstly, they do...
Read more