Plant fireweed Ivan-Tea: the use of seeds and useful properties with a photo

Ivan-tea narrow-leaved (Chamerion angustifolium lat.) Herbaceous perennial plant. Among the people, fireweed, Ivan-tea is known as: a secretary, a plakun, Koporsky tea, a miller, a bread box, a mother liquor or a dry spell.

Where does Ivan Chai grow?

This plant is distributed throughout the entire Northern Hemisphere, but its most favorite habitats are the taiga regions of Siberia and the European part, which is where Ivan-chai grows. He loves light forests, he can often be found in clearings or near railway embankments. It prefers dry sandy soil, but as trees or shrubs appear around it, it gradually dies out. But in the neighborhood with raspberries grows for many years.

Medicinal and beneficial properties of Ivan-tea

To begin with, it is worth saying that this is Ivan-tea (see photo below), a short grass, carries a huge range of various substances that can have a beneficial effect on absolutely the entire human body. 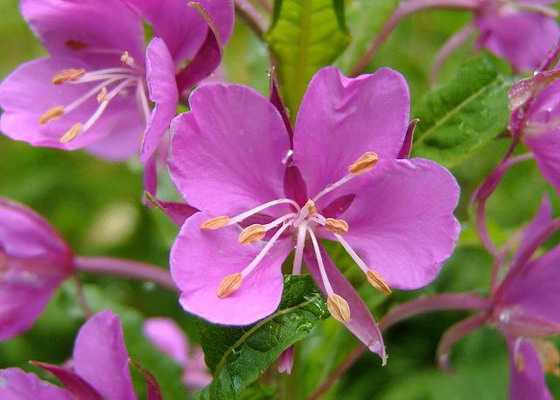 Ivan Chai in the photo

Undoubtedly, under the influence of such factors as the place of growth, harvesting time, technology for preparing the final product, shelf life, as well as the conditions for preparing tea leaves, the content of some useful substances changes to some extent.

After the brewing is done, not the entire composition of Ivan-tea leaves is transferred to the infusion (water), but only its soluble (extractive) part. In addition, over time, this figure also falls, in older leaves there are already significantly fewer soluble substances, since complex useful substances decompose into simpler ones. 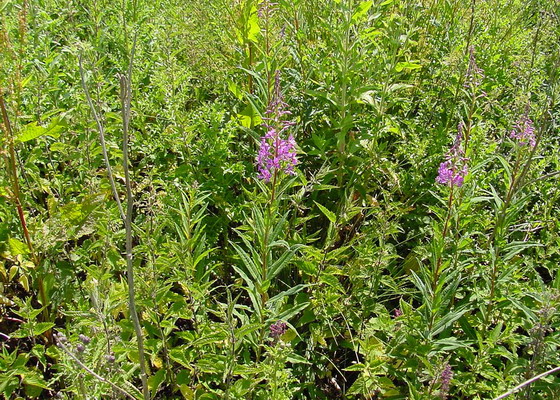 However, one thing is clear that, due to the presence of tranquilizing and anti-inflammatory properties, Ivan tea is a medicinal plant and has a significant superiority over other medicinal herbs.

Substances that are part of fireweed Ivan-tea

Mucus – thanks to them, an enveloping and softening effect occurs, in which it is easier to relieve inflammation, pain, as well as calm and relieve cramps.

Flavonoids – the presence of quercetin and kaempferol, can have a choleretic, antispasmodic, diuretic effect.

Chlorophyll is a green pigment that, due to its ability to absorb light energy, is able to stimulate the wound healing process and significantly improve the body’s metabolism.

The presence of a substance such as pectin allows you to increase the shelf life of willow tea.

The tannins of the pyrogallic group provide hemostatic, anti-inflammatory and astringent properties of the medicinal plant.

The presence of all major vitamins: bioflavonoids – have the properties of vitamins P and C2, which help to accumulate and retain vitamin C in the human body, which in turn strengthens the walls of blood vessels and stabilizes their membranes. A wide range of vitamins of group B are presented, which help to determine the normal functioning of the nervous system, and at the same time the functions of the endocrine glands, which can provide a beneficial effect on patients with ulcers, diabetes, gout, the structure of the skin is significantly improved and invaluable help in the treatment of liver diseases. (particularly hepatitis and cirrhosis). 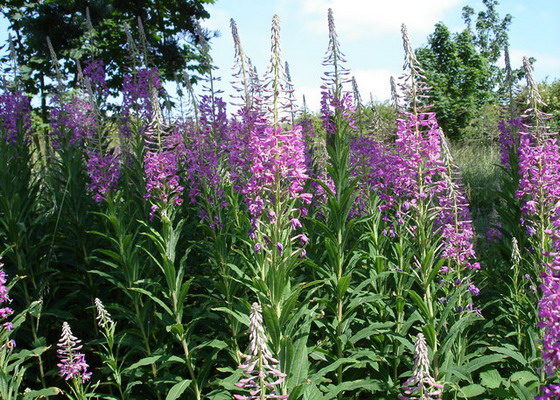 It is also worth noting that one fresh leaf of Ivan tea contains a lot of ascorbic acid (vitamin C), three times more than oranges. During processing, some of its amount is lost, but still the level necessary for a person remains.

At the same time, Ivan-chai can offer vitamins A, B, E, K in the required amount, it is enough to add its leaves little by little when preparing various dishes or just eat tea leaves.

The main advantage of Ivan tea is that it contains substances such as caffeine, purine, oxalic and uric acids, which are the causes of failures in metabolic processes. Ivan-tea is a plant that is not addictive (as it happens when drinking coffee or tea) – by its nature, it is simply tasty and healthy, herbal tea with a healing effect. 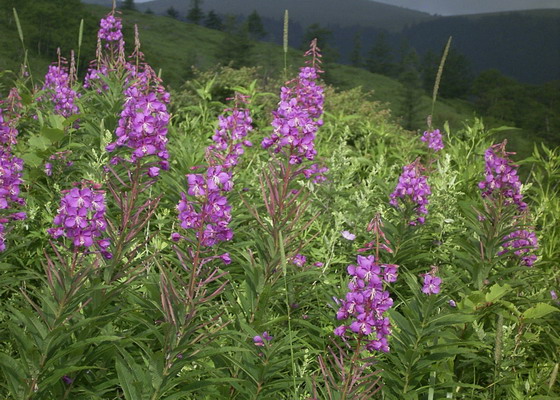 I would like to emphasize that it is simply impossible to express any specific formula for the beneficial properties of this herbal collection, since all of the above substances have a beneficial effect on the human body only in the aggregate. The fact of the general mood and different technologies for preparing tea leaves plays an important role, as well as the material and quality of the dishes have their effect, all these are factors that must be taken into account for the implementation of a favorable treatment. That is why the important criteria for making the “necessary” tea will be the quality of the water, the methods of brewing (it is important to provide for the quality of the dishes) and the general mood of the brewer and drinker.

Able to have a preventive effect on neoplasms of a malignant and benign nature.

Effective in the treatment of diseases of the genitourinary system and as a prophylactic for prostatitis.

Helps in scarring of duodenal and stomach ulcers.

It is able to increase immunity and the overall resistance of the body to various infections.

It has a beneficial effect on the endocrine and immune systems.

Remarkably improves the composition of the blood and cleanses it.

The benefits of Ivan-tea: it has a beneficial effect in the treatment of neurosis-like conditions and neuroses, as well as in post-traumatic disorders caused by severe stress.

Helps to reduce the level of intoxication in the body, even with radiation contamination.

Can be used as an antipyretic.

Able to bind and remove heavy metals from the human body.

Has a unique anti-inflammatory effect.

It helps to relieve food and alcohol poisoning.

It will perfectly restore strength in case of fatigue, exhaustion and general fatigue of the body.

Effective use for kidney or liver stones, as well as for diseases of the spleen.

It has excellent taste qualities of herbal tea. But, in general, Ivan tea’s benefits and harms do not end there.

How to dry the herb Ivan-chai

From ancient times to the present day, people have knowledge that Ivan tea has beneficial properties. Apitherapists and herbal healers have long used this herb in their practice. 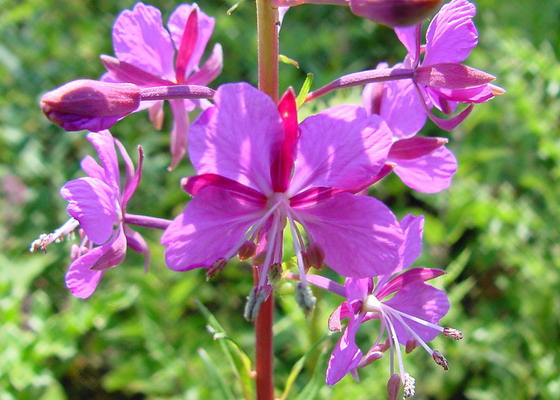 For starters, I would like to share the recipe for making the so-called “Koporsky tea”. To do this, first of all, it is necessary to properly ferment the herb, as a result of which its enzymes from a passive form will pass into an active one. Ivan-tea flowers need to be collected by cutting off only brushes. Then you need to lay them out on the floor and twist them like a carpet, into a roll.

In this state, they should lie overnight, covered with a damp piece of burlap. The next morning, unfold and spread again so that the flowers partially dry. And in conclusion, such dried raw materials must be dried, preferably in an oven, but it can also be in an oven, and then grind by hand. Regardless of how the herb was dried, the brewed tea should be green. 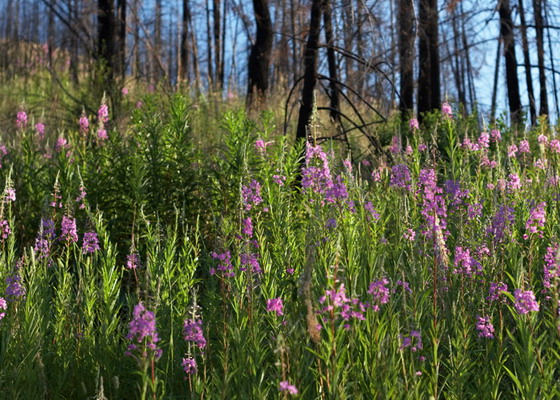 Storage of Ivan-tea prepared in this way should be carried out exclusively in thick paper bags and no more than two years. Why is it called Ivan-chai, because it makes excellent tea.

Add a pinch of salt to brewed tea. It should be drunk 150 grams half an hour before a meal. In this way, you can significantly lose extra pounds and even get rid of a double chin, the cause of the formation, which is a malfunction of the salivary glands. 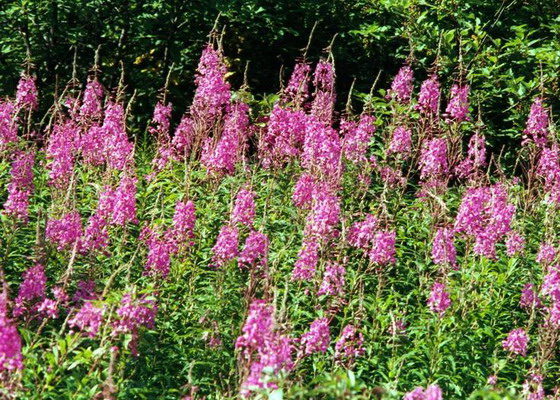 The use of such salted tea allows you to stop the processes that contribute to the growth of the second chin, and it gradually begins to disappear.

To achieve a reduction in cravings for alcoholic beverages, as well as to help the patient get rid of hangover psychoses, dry thyme grass (5: 1 by weight) should be added to the Ivan-chai plant. Then it must be brewed and drunk by adding honey during a strong need to drink alcohol. Drink 5-7 cups of this tea throughout the day.

Ivan tea benefits in the fight against smoking

It is no secret that a person who refuses cigarettes becomes very irritable and often suffers from insomnia. In the fight against these symptoms, Ivan tea infusion will help out, which is not at all difficult to prepare.

It is enough to take a dessert spoon of Ivan tea and peppermint. Pour the resulting mixture with half a liter of boiling water and leave for 15 minutes in a water bath. Then cool, strain and take half a glass five times a day.

The use of such tea will significantly speed up the removal of toxins, help normalize sleep and will have a calming effect on the nervous system. To remove all negative phenomena, it is enough to drink such tea for 2-3 weeks.

Ivan-tea does not bring harm in the treatment of bronchitis

Ivan-tea tea should be mixed with mandarin peels crushed to a powder state (5: 1). After that, brew and drink like regular tea, in which you can add a little honey for a greater effect. The use of such tea will have an antiviral and antimicrobial effect, including it can be used to prevent various types of colds.

Ivan tea for prostatitis and adenoma

In the treatment of these diseases, Ivan-tea helps by itself, but the effect of the drink can be significantly enhanced if dried hazel leaves (hazelnut) are added to it in a ratio of 1: 3. Such tea should be drunk without the addition of sugar or honey. But the addition of a small pinch of sea salt is welcome.

Ivan-tea for the treatment of the spine and joints

To prepare this miraculous tea, you need to collect 300 yellow leaves of a sharp-leaved maple. Then these leaves must be crushed in a meat grinder or by hand and add half a kilogram of Ivan tea to them. Pour a tablespoon of the resulting mixture with half a liter of water and insist in a thermos all night. Then drink 150 g 15 minutes before meals, 3 times a day. The course of treatment lasts for one month. In total, you need to take three such courses, the break between them should be ten days. As a result, getting rid of joint pain of various origins comes.

To Ivan-tea, you need to add dry and crushed herb medicinal eyebright in a ratio of 1: 2. It is best to brew such tea in a half-liter thermos (daily rate). And throughout the day, drink 150 grams, preferably an hour after eating, for a greater effect, you can add a teaspoon of honey. Ivan-tea practically does not bring harm.

Incarvillea flower (Incarvillea): cultivation and varieties in the photo