A perennial hosta flower is considered a “plant for the lazy” – if you choose the right place to plant, the culture is able to actively grow with little or no care. If we talk about how the hosts look, then special attention should be paid to the description of the leaves – it is they who endow the plant with decorative qualities, while the flowers of the culture are rather inconspicuous.

Hosta is a not very numerous (about 40 species) genus of plants of the lily family. Outwardly, these are low rosette perennials : hosts are dense bushes formed by basal leaves. They have thickened rhizomes with numerous threadlike roots. They grow in shady forests on moist fertile soils.

The flowers of the host are funnel-shaped, on towering peduncles, varying in color from white to purple. Not devoid of beauty, flowers are still not the main decorative advantage of the host. Their decoration is graceful leaves collected in dense basal rosettes, with a diameter of 20 to 100 cm. In different species and varieties of hostas, the leaves differ in size (from miniature, match-length, to almost half a meter), shape (from narrow-lanceolate to heart-shaped), color (from light and dark green to gray-blue). Leaf blades of some species and varieties of hostas have yellow and white strokes or stripes of various widths and shapes. The edges of the leaves are wavy, and the tip is elongated and twisted.

Hosta is distinguished by a rare stability of the decorative effect – from the moment the leaves unfold in May until they wither in October. It is simple in agricultural technology, undemanding in care, undemanding to heat and frost-resistant, easily propagated . All hostas are distinguished by rare shade tolerance and even shade-loving . This is almost the only plant whose flowering can be observed under the canopy of trees at the end of August. Hostas are highly resistant to pests and diseases , they tolerate transplantation well, are non-aggressive, and can grow in one place for many years. The most widespread in the gardens are 7-9 types of hostas and many of its variations and varieties.

Below you can find photos and names of host species, as well as their descriptions.

Hosta white-edged forms very dense bushes about 20 cm high and up to 60-70 cm in diameter. The leaves are broadly lanceolate, up to 15 cm long, up to 6-8 cm wide. 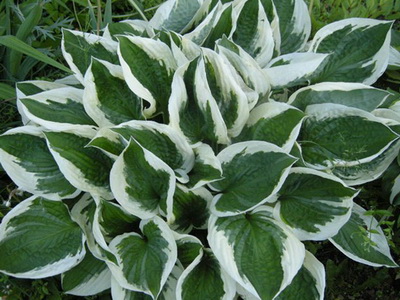 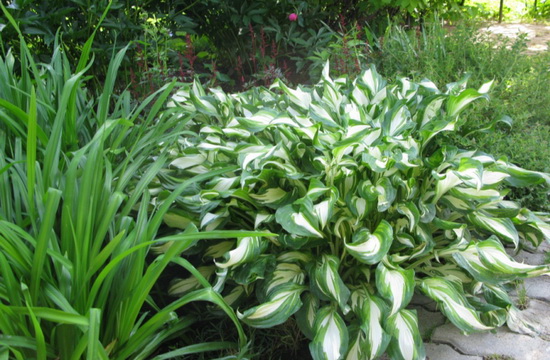 From the photo and description of this hosta, it immediately becomes clear why this plant got its name – its green leaves have a narrow white border.

Peduncles up to 30 cm tall, flowers up to 6 cm long, lilac-violet. Blooms in July-August. This hosta is quite widespread among flower lovers, hardy and unpretentious . Grows best in partial shade when fully lit in the morning and evening.

Hosta swollen has almost heart-shaped, very wide leaves (up to 20 cm), up to 25 cm long. Forms powerful bushes up to 80 cm high and the same width. Leaf blades are dark green, shiny below, with pronounced longitudinal venation. Peduncles up to 1 m high, blue-violet flowers, up to 5 cm. Blooms in July -August for about 3 weeks. It is unpretentious, reaches the greatest decorative effect on moist loams, in partial shade. 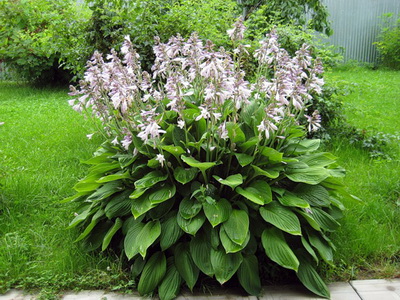 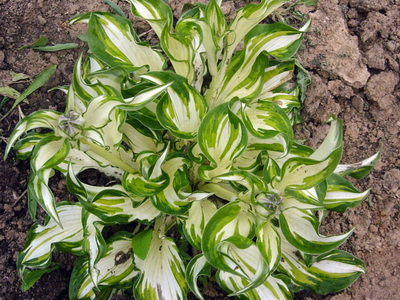 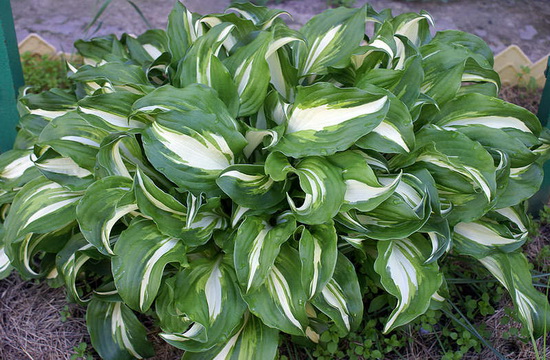 As you can see in the photo, this type of hosta has leaf blades with an uneven wavy surface and a slightly twisted top.

The petiole is light, grooved, slightly winged. The leaf is green (16 x 10 cm), with an uneven longitudinal white middle. The flowers are funnel-bell-shaped, light purple, up to 5 cm long. Peduncles up to 80 cm tall. Blooms in August.

Hosta Siebold has very large (length up to 35 cm, width up to 25 cm) leaves, bluish-green, with a matte coating. The leaf shape is close to heart-shaped. Peduncles low, hidden among the leaves; the flowers are pale lilac, almost white. Blooms from the end of June for 2 weeks. In the sun, this hosta loses its bluish color and becomes dark green. Semi-shady places are most acceptable. 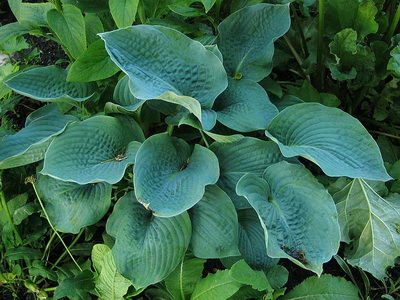 Hosta lanceolate has leaf blades up to 17 cm long, 7-8 cm wide, green. Bushes grow quite quickly. Rosettes up to 40 cm high, up to 60 cm in diameter. Leaf blades are located in different planes. Petiole rather long, grooved. Peduncles up to 60 cm high, purple flowers. Blooms from the end of August for 2 weeks. 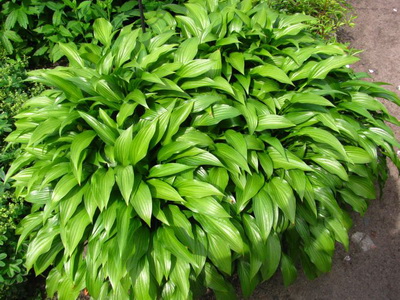 Plantain hosta has large (length up to 30 cm, width up to 15 cm) leaves with a heart-shaped base and a pointed apex. The leaf blade is bright green, shiny. The flowers are large, up to 10 cm long, white, peduncle up to 60 cm high. It blooms in August. 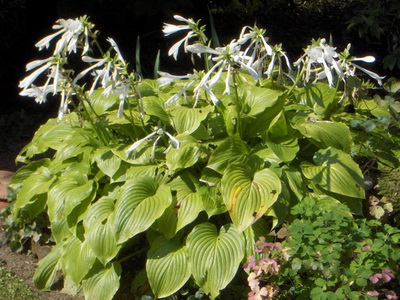 How to plant hostas and how to care for them

Before planting the hosta, you need to choose the right area with sufficient illumination. The most suitable for the host are moisture-intensive, humus loams. Many golden forms develop best in areas lit only in the morning. With the right lighting, hosta bushes grow quickly, have thick, neat rosettes, and the color of the leaves is most attractive. If there is the possibility of frequent watering and regular care, then the host can be planted at any time from spring to September. The most painless transplant occurs in May and August. Further care consists in weeding, fertilizing, regular watering with a lack of atmospheric moisture.

A necessary condition for growing hostas is an increased content of organic matter in the soil. It is most expedient to introduce rotted manure in the fall in the form of mulching the soil around the bushes with a layer of 5-7 cm. This will simultaneously improve the wintering conditions of plants. In the spring, the mulch is shallowly closed up. Mulch can be scattered under the bushes and at the beginning of summer, then, in addition to fertilizer, it will increase the humidity of the air, which is very useful for hosts.

Feed the hosts with mullein infusion. This contributes to the rapid growth of leaves.

And how to care for hostas at the end of the warm season? In late autumn, withered leaves of the host are removed with secateurs. At the same time, it is good to sprinkle the bushes with peat, which is useful, especially in the northern regions. Many types of hostas develop rather slowly and are not decorative until the age of 4-5 years. The most elegant are adult bushes, usually after 7-8 years of vegetation.

Hostas are propagated mainly by dividing overgrown bushes. It is better to do it in the spring, before the leaves are fully developed, or in the fall in September. Old bushes usually break up easily into divisions.