Despite the fact that the decorative poppy blooms for only one or two days, its cultivation in flower beds is very popular. The fact is that by sowing just one box of seeds, you can get up to twenty plants, which, blooming one by one, will provide your flower garden with decorativeness for more than a month. And if you sow poppy flowers more abundantly, then the flower bed will turn into a mini-garden with blazing lights.

How do poppies bloom?

Poppy belongs to the poppy family. There are perennial or annual species that produce seeds in the current year. It has strong, high (up to 1 m) stems and beautiful pinnate leaves, naked or pubescent, decorative for a long time.

How does poppy bloom and what is its beauty? The main beauty of the plant, of course, is in the flowers. They are large and very bright, of various colors – from fiery red to milky white. At the base of the flower there is a dark, almost black spot.

The very process of blooming a garden poppy flower is unusual and interesting. First, the bud cracks, the calyx falls off and a flower crumpled like tissue paper appears to the admiring gaze. But instantly, before our eyes, the petals straighten out, turning into a delicate flying flower. 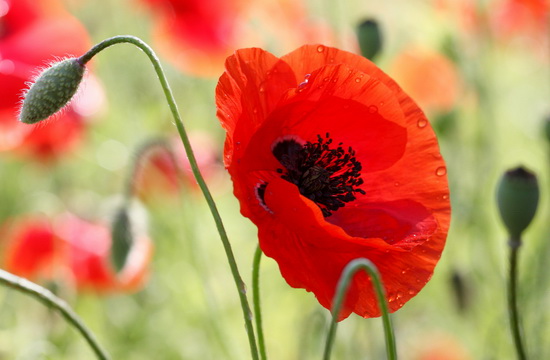 Look at the photo – the poppy flower in the center has a lot of stamens surrounding the future fruit-box, covered with a pistillate velvety disc-lid.

A flower on a long peduncle triumphantly rises above the dense green foliage and attracts with its brightness.

However, its flowering period is short – only 1-2 days. To replace it, more and more new flowers appear, preserving the beauty and freshness of a blooming garden.

Poppy is a light-loving and unpretentious plant, it can endure both cold and drought, it grows on any soil, but prefers loose, nutritious, cultivated. In this case, the poppy bloom is abundant and luxurious. When caring for poppies, remember that this plant tolerates stagnant water.

Of the perennial poppy species, oriental, hollow-stem, alpine and bracts are used in culture:

Oriental poppy is the king of perennial poppies. There are many garden forms and varieties of this species. The plant is tall, up to 60-80 cm. The leaves are large, basal, pinnately dissected. 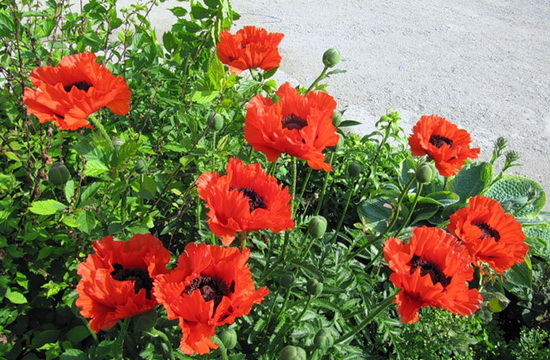 As you can see in the photo, in this type of poppy, the flowers are bright red or pink, solitary, on elastic peduncles reach 10-12 cm in diameter.

Poppy propagation is carried out by seeds, division of the bush. Ornamental poppy seeds can be sown both in spring and autumn. They do not lose their germination for 2-3 years. Old bushes are divided at the end of summer.

This type of garden decorative poppy is used for group plantings and cutting. Cut flowers should be at the beginning of the blooming of the buds. Flowers stand in water no longer than 2-3 days. This view is very effective in the background of flower beds as a bright background.

Poppy golostebelny, or Siberian. This perennial is often grown as an annual, as it needs to be renewed after 2-3 years. This species differs from others in the absence of leafy stems. The leaves are only basal, dissected, pubescent, but may also be bare. 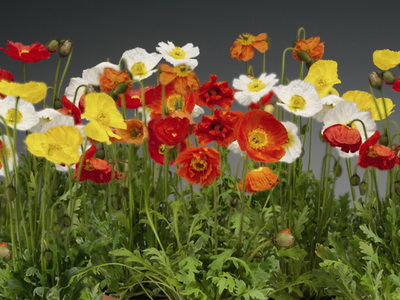 Flowers on low stems – up to 20-30 cm, 2.5-5 cm in diameter. The color is white, yellow or orange. Flowering is plentiful due to numerous peduncles, from May to frost, which is of great decorative value for this poppy. It is unpretentious in culture, but prefers open sunny places and warm, permeable soils. Despite the fact that it is a perennial, it propagates only by seeds that have good germination, both in spring and autumn. Easily propagated by self-seeding.

Used in flower beds and for cutting. The flowers are cut at the half-bud stage.

Poppy bract. This is the tallest of the poppies. Its height is up to 130 cm. The plant itself is powerful, with large dissected basal leaves, up to 45 cm long. The flowers are also large, up to 16 cm in diameter. They are crimson-red, with a black spot at the base of the petals. Blooms in spring. Flowering is short. 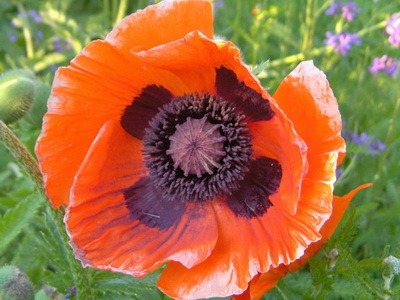 Both annual poppies and perennial poppies are easily propagated by seeds. For many, this is even the only way to reproduce.

Perennial poppies are propagated by dividing the bush after flowering and by daughter rosettes of leaves that appear at the end of summer on mother bushes.

It is better to plant them in peat pots . They are allowed to take root and only the next year they are planted in a permanent place.

The seed method of reproduction in perennial poppies is somewhat different than in annuals.

Seeds should be sown immediately after they are collected in seedling boxes. With the advent of 1-2 true leaves, they are dived into peat pots, which are dug into the ground. In a permanent place they are planted in pots as needed. For the winter, plantings are covered with a dry leaf. This whole procedure can be done starting in early spring. But the seeds no longer have the same germination capacity as immediately after they were collected.

Caring for poppies consists in rare watering, frequent loosening, fertilizing with humus, which is used as mulch.

In a hot, dry summer, the leaves of faded poppies quickly wither and dry out, so their systematic removal is necessary. By the end of summer, rosette leaves reappear, delighting us until frost with the freshness of greenery and its beauty.

Of the oriental poppy varieties, the most common are:

“Perry White”. Old variety with white flowers. There is a black spot at the base of each petal. Peduncle height 90 cm. 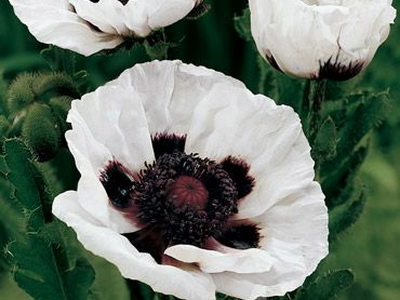 ‘Marcus Perry’ is a classic cultivar with large orange-scarlet flowers and black markings at the base of each petal. Peduncle height 90 cm. 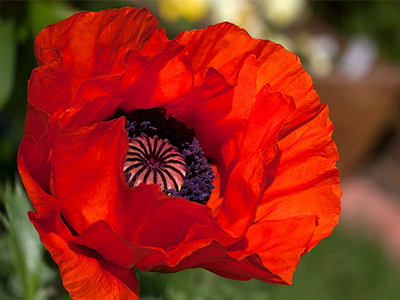 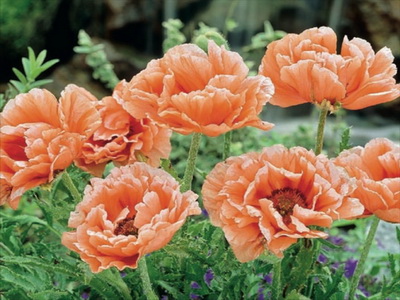 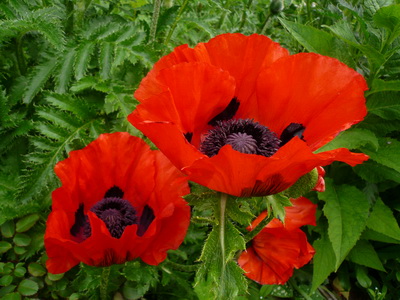 Most gardeners prefer to plant perennial tall flowers: firstly, they do...
Read more