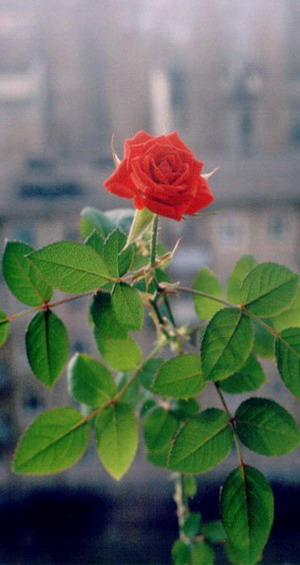 This is a group of the smallest, undersized roses, which were brought to Europe from China in 1810. Miniature roses are characterized by low growth, long, abundant flowering and has more than 2000 varieties and hybrids in its genus. On their own roots, the plants reach 15-25 cm in height, and the individuals grafted on the wild rose grow up to 30-50 cm, the bush turns out to be well leafy and compact.

The leaves are compound, consisting of 5-7 small, leathery, shiny leaves, ovate, finely serrated along the edge. Most cultivars are dark green, while some cultivars are bronze-brown or light green with dark veins. 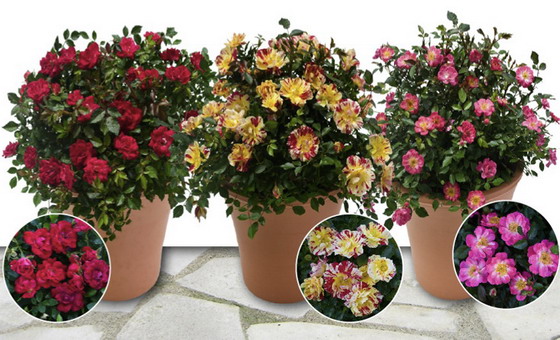 Flowers with a large number of petals, small from 2 to 5 cm in diameter, retaining color throughout the entire flowering period. At the same time, there are crimson-raspberry, lemon-yellow, coral-pink flowers on one bush, which makes the plant exceptionally elegant. Cut flowers, standing in water, do not lose their decorative effect and exude aroma for 7-10 days.

Miniature roses in the garden

A worthy place is occupied by miniature roses in the garden due to its longer and richer flowering than that of tall counterparts. They are ideal for planting along paths, in groups on lawns, in arrangements with perennials and ornamental shrubs, or alone in flowerpots.

In addition to types of roses with a compact bush, there are ground cover, climbing and trellis forms, which can significantly expand the range of use of miniature plants in gardening. Such forms are ideal for creating borders, look great in flowerbeds and borders, are used to create living arches and decorate walls, are used for landscaping slopes, hills and places with rocky soil unsuitable for growing other types of plants.

Well miniature roses grow in open ground, and eventually adapt to room content. In regions with air temperatures in winter below -5 ° C, mandatory shelter is required. 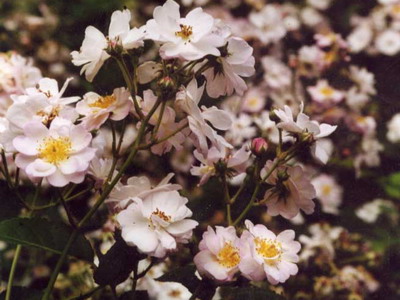 Miniature roses at home in a pot

There are types of roses for growing at home, they are divided into 2 groups:

Potted flowers are used for temporary arrangements and fade after flowering.

Indoor miniature roses growing at home in a pot are evergreen, own-rooted species that bloom profusely throughout the year. It is best to keep flowers grown from cuttings. 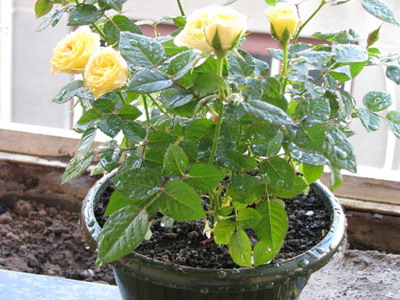 Plants in culture are very simple and unpretentious, but for good growth, long and abundant flowering, miniature roses prefer growing in a sunny area protected from the north winds and well lit (especially in the morning). Morning sunlight promotes rapid evaporation of moisture from the plant, preventing powdery mildew and rust. The culture takes root well and grows on almost all types of soil, but prefers loams with low acidity and good water-holding capacity. Dry sandy soil can be made favorable by laying 1.5-2 buckets of a mixture of clay and humus in equal proportions in each hole when planting. On damp and clayey areas, 2-2.5 buckets of humus and river sand 1: 1 are brought into the pit.

For growing potted plants, it is necessary to use a nutrient substrate consisting of humus, river sand, peat and leaf soil in a ratio of 2:0.5:2:1. At the bottom of the pot, as a drainage, you need to lay a layer of foam, and on top of 5-10 mm a layer of sphagnum moss or charcoal. Transplantation is carried out as necessary by transferring the individual to another pot, without violating the integrity of the earthy coma of the root system.

The best propagation method is green cuttings. In room conditions, a suitable time for reproduction is the period from March to September, in the open field – from May to August. For this, cuttings are used only from healthy individuals, cutting from the middle part of annual shoots that are in the bud coloring phase. Each cutting should be 10-12 cm long and have at least 3 buds. Rooting occurs in river sand when the cutting is deepened by 3-5 cm. To speed up the process and prevent evaporation of moisture, the cutting is covered with a glass jar on top. After 1.5-2 weeks, rooting will occur and the individual can be planted in a permanent place.

During the summer, miniature roses require maintenance with regular abundant watering and top dressing. Caring for roses in the garden includes at least 3-4 top dressings. In the first half of the growing season, it is necessary to apply nitrogen fertilizers, in the second – phosphorus-potassium. After removing the shelter and pruning in early spring, you need to fertilize with urea or ammonium nitrate and repeat the procedure as the shoots with leaves grow. After the appearance of the buds, they are fed with a complete mineral fertilizer.

In August, potassium nitrate and superphosphate should be added. The soil around the bushes must be maintained constantly in a loose state, preventing the formation of a crust that prevents air and moisture from reaching the root system.

Prevent weeds from appearing under the bush. Morning spraying works well on garden plants, which cleans them of dust and prevents the appearance of pests. But when watering, waterlogging should not be allowed, and in cloudy weather, spraying harms the horticultural crop.

Miniature indoor roses require maintenance in a well-lit place all year round for at least 8-10 hours a day. To maintain the required level of humidity, you need to spray the leaves from the underside 1-2 times a day. Leaves should be washed twice a month to prevent infestation. In the warm season, you need to provide the plant with access to fresh air.

It is necessary to water the plant abundantly 1 time in 4-6 days with non-chlorinated settled water. In winter, from October to April, the water temperature should be within + 16-18 ° С, in summer, from May to September + 20-24 ° С.

You can start feeding indoor culture 1.5-2 months after rooting or transplanting with mineral fertilizers containing potassium, phosphorus and nitrogen. Wood ash can be used as a fertilizer – potassium in its composition contains almost no chlorine harmful to roses.

Even good care cannot protect plants from diseases and pests. It is necessary to constantly monitor landings and take action at the first sign. Most often, the culture is affected by spider mites and aphids, which suck the juices from the tissues of the leaves and buds, which leads to their drying and falling off. With a weak lesion, treatment with colloidal sulfur powder will help. With a strong – spraying the bushes with a solution consisting of 200 g of laundry soap and 20 gr. copper sulphate dissolved in 10 liters of water.

Rust attacks stems and leaves. If rusty-brown spots are found, the bush must be treated with a Bordeaux mixture, and the affected parts removed and burned.

Formative and sanitary pruning is a mandatory procedure, which miniature roses are subjected to 3 times a year. Pruning is summer, spring and autumn.

Summer pruning is minimal, removing wilted flowers and maintaining the shape of the bush by trimming long young shoots. It is necessary to regularly remove drying and yellowing leaves, preventing the appearance of diseases and pests. Withered flowers are removed along with 3-5 cm of the stem – then new buds form faster from the dormant buds, and the break in flowering will be minimal. In climbing types of roses, dried and excess branches are pruned.

Spring pruning – carried out no later than mid-March. Weak branches are cut out, shoots are shortened to 10-15 cm in height. 3-5 buds should remain on each shoot.

In individuals older than one year, small, weak and intertwining branches are cut. 4-5 strong shoots remain on the bush, each with 3-5 eyes. Hanging along the edges and thin branches with close leaves are removed, cut off, blind shoots and growing inside the bush. 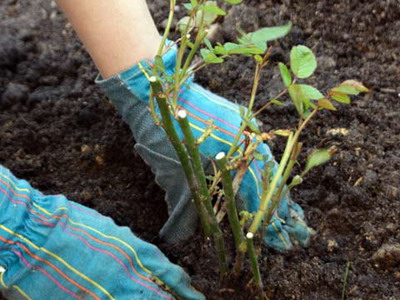 Autumn pruning – carried out in late autumn or early winter. Roses are cut short, leaving 3-4 dormant buds on each shoot. Weak and dry shoots are removed to the ground.

Spring is the most crucial period for roses. Miniature roses in spring require special attention:

The vast majority of varieties of garden roses are damaged during frosts. Overwintering depends on the winter hardiness of the variety, the condition of the plant, its readiness for winter, weather conditions and the method of shelter. Miniature roses need shelter in winter and need to be winterized. To do this, it is necessary to carry out a number of agrotechnical measures that will significantly increase the winter hardiness of plants:

Before shelter, you need to dig the ground under the bushes and spud (preferably dry earth) with a mound up to 15 cm high. When the soil freezes slightly, the plant must be covered with a layer of spruce branches or dry foliage at least 10 cm thick. During thaws, it is recommended to ventilate the plants, partially removing the shelter for several hours.

This type of plant is able to decorate any suburban area. Miniature roses are most suitable for giving from the beginning of summer until the end of autumn, they are simply strewn with colorful flowers. Planted bushes look best separately from other flowers, next to conifers or as a lining for tall hybrid tea varieties of roses . Climbing forms will adequately decorate the fence, arbors and walls, complementing the landscape design. 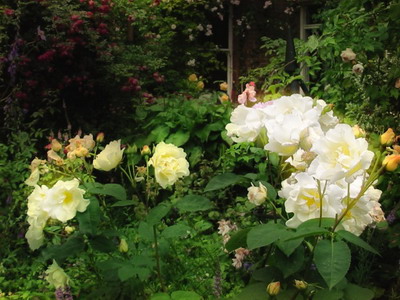 It is a miniature likeness of a classic rose bush. Cordana miniature roses are distinguished by bright numerous flowers with a variety of colors and shapes, and lush dense greenery. Bush up to 25 cm high with erect stems. The leaves are dark green, up to 2 cm wide. Flowers solitary, up to 3 cm in diameter. 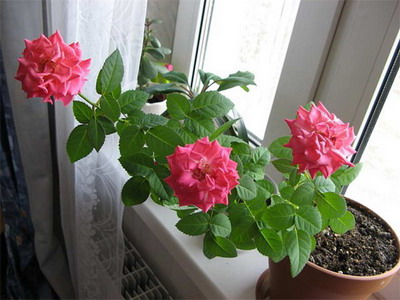 The species does not require special care and is often used to decorate ornamental gardens, lawns in the form of a trunk or as a pot culture.

They are compact branched bushes from 15 to 25 cm tall, with small, glossy dark green leaves up to 12 mm wide. Shoots up to 5 cm long, each with 5-7 leaves. Small buds bloom in single or collected in inflorescence flowers up to 3.5 cm in diameter. 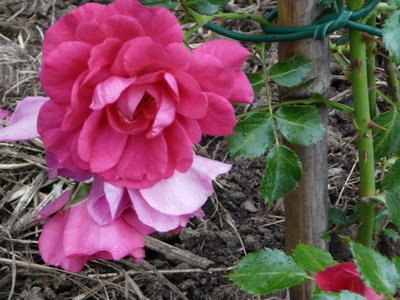 Cordes miniature roses are obtained by crossing Rugosa roses and Vihura roses with varieties of other garden groups. The variety is drought tolerant and disease resistant .