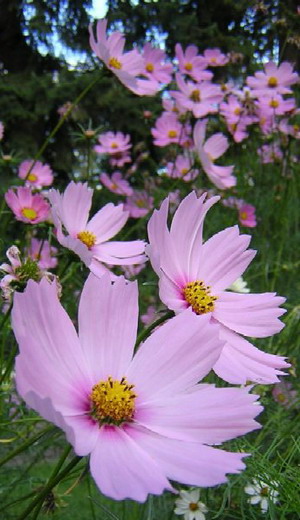 Description: Cosmea is native to the tropical and subtropical regions of America. About 20 species are known to science. They are perennial, annual herbaceous plants. They often reach great heights. The foliage is located opposite, twice dissected into linear, narrow to filiform lobes. Inflorescences are multi-flowered baskets. They are collected in corymbose loose panicles or are located singly. The marginal flowers are large, reed, pink, purple, dark red, golden yellow or white, and the middle flowers are small, tubular yellowish. The fruit is a brown, gray, or dark yellow, somewhat curved achene. 1 g contains about 250 seeds, which remain viable for 2-3 years.

The type is an annual herbaceous plant. Homeland are the mountainous regions of Mexico. Stems erect, densely branched, 80 to 150 cm high. Inflorescences are from 7 to 10 cm in diameter, rather large, collected in a rare corymb or solitary. The marginal flowers of the double-pinnate cosmea have a red, pink, white or purple hue. Reed-shaped, three-toothed at the top, form one or more rows. Tubular – yellow, small, arranged in the form of a disk. Abundant flowering occurs from June to September. Seeds ripen well, and their germination persists for 3-5 years. 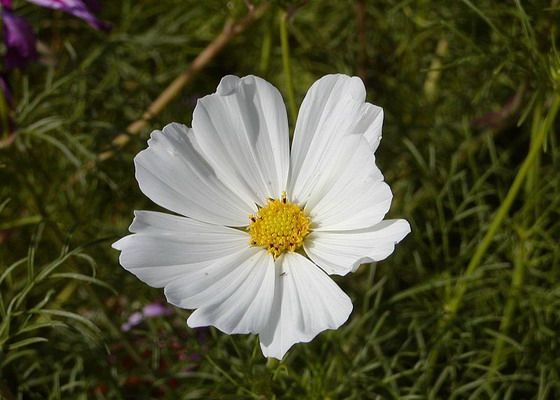 It is this type of cosmea that is one of the most common annuals used to decorate flower beds. However, a certain gardening community believes that the kosmeya does not look very sophisticated: it has too large inflorescences that are too brightly colored. But according to the results of targeted breeding work, this flower has developed new, more refined varieties with small inflorescences and not so bright colors, so today you can choose a flower for every taste.

This species has special varieties of cosmea. For example, the variety “Dazzler”. He has young inflorescences of a bright red hue, but after a few days they become crimson. This is a very unusual garden form. The “Radiance” variety is no less attractive. Its peculiarity lies in closely spaced, even sometimes overlapping, reed flowers, due to which the inflorescences are perfectly round. The middle consists of tubular flowers, its shade is yellow, and around it you can see a dark pink strip, located on the border of a lighter tone. In tall varieties, flowering shoots are quite suitable for decorating vases.

This species does not take root well in countries with a cold climate, since its homeland is Mexico. If the cosmea flowers are transplanted into a pot, then it will be able to overwinter in living rooms or a greenhouse. This variety of perennial cosmea is grown in greenhouses with tubers and cuttings. You can do the same at home. 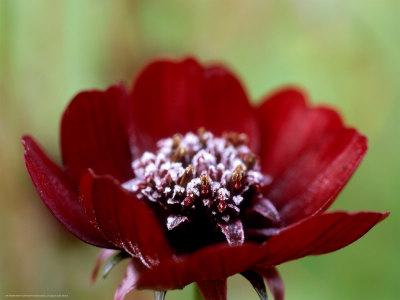 Often this unusually beautiful garden flower is called the “black” cosmea. Many gardeners strive to have this particular species in their collection, and some try to find a black specimen. But the inflorescences of this species are painted in a dark red velvety color, and not black. They emit an unusual chocolate smell. The foliage of this flower is unremarkable, but complex and has an even number of simple leaflets.

This unusual species grows in Latin America, and more precisely in the southern regions of Mexico. In the neighborhood are often double-pinnate cosmos. In view of its tropical origin, the sulfur-yellow cosmea is very thermophilic, and it is severely harmed if the summer is wet and cold. 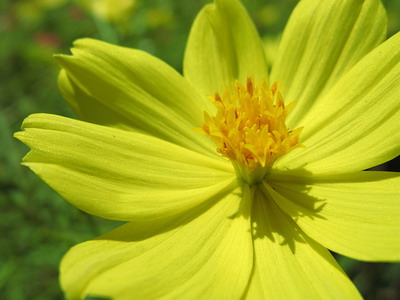 An annual herbaceous plant. The stems are branched, erect, pubescent, up to one and a half meters high. The foliage is thrice or twice pinnately dissected with lanceolate, wide pointed lobes. The diameter of the inflorescences is from 4 to 6 cm. The reed flowers are orange or golden yellow, and the tubular flowers are yellow, small, their dark anthers with orange ends protrude.

Cosmea care: the most important thing is regular and timely watering. It is advisable to remove wilted flowers immediately, as this leads to the rapid formation of new buds. If tall varieties grow in the garden, then they need to be tied to stakes driven into the soil. If the soil is rich in nutrients, then top dressing is carried out every 6-8 weeks, and if the soil has a small amount of nutrients, then top dressing should be added every 3-4 weeks. Top dressing should consist of a solution of complete mineral fertilizer.

Reproduction and cultivation of kosmeya: carried out by planting seeds. Sowing is done in cold greenhouses or open ground in the month of April. The most suitable sowing period for seedlings is from March to April. When planting seeds, they only need to be pressed into the substrate, while not falling asleep with soil, since they need light to germinate. If the temperature is 15-18°C, then seedlings will appear within 7-14 days. Seedlings are planted in May, observing a distance of 30-35 cm. Cosmos flowers normally tolerate transplantation. Gardeners who like intense, lush flowering have long appreciated that growing cosmea brings a lot of positive emotions. It is good to plant it on the back of the curb. The background, which is formed by numerous inflorescences and finely dissected pinnate leaves, looks rather informal.