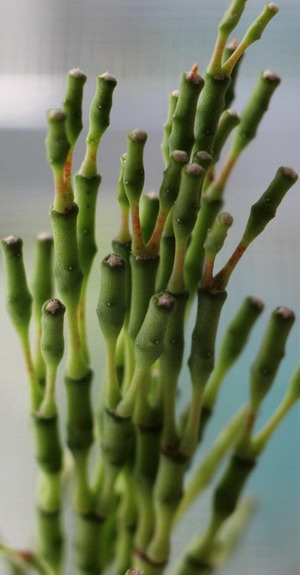 Hatiora is a genus of epiphytic and lithophytic cacti that naturally grows in the tropical forests of Brazil. Some species are greenhouse and houseplants.

A succulent shrub that grows naturally in the tropical forests of the southeastern regions of Brazil on tree trunks and branches (epiphytes), in rock crevices (lithophytes). Includes about 7 species. Cactus with leafless, jointed stems growing vertically, drooping with age. Individual segments are club-shaped, pin-shaped, cylindrical, or flat; numerous areoles lack spines. Funnel-shaped flowers, depending on the species, are red, pink, yellow, appear on the tops of the stems only in young areoles, which distinguishes hatiora from cacti of the close genus Ripsalis.

Below are photos of hatiora of some species common in room culture:

Hathiora Gartner (Hatiora gaertneri) with drooping dark green shoots, oval-shaped segments, along the edges with scalloped notches, on the tops of which areoles are located. Bright red flowers up to 4 cm long, up to 5 cm in diameter bloom at the tops of the stems and at their joints. Especially abundant flowering in specimens grafted on pereskia or gilodereus. 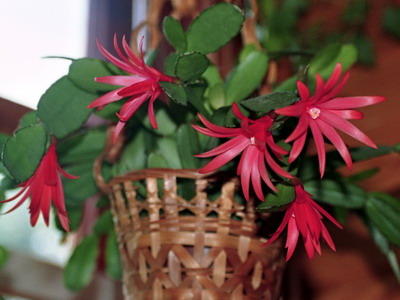 Hathiora Herminae (Hatiora herminiae) – has straight or arcuate shoots up to 30 cm long, with cylindrical segments without ribs, dark green, up to 5 cm long, up to 0.5 cm in diameter. Areoles are small, with 1-2 hairs, rarely located , on the lateral surfaces of the stems. Raspberry flowers up to 2.5 cm long develop from apical areoles. 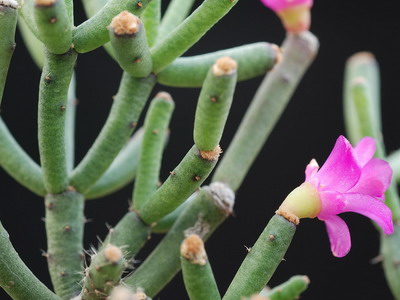 Hathiora pink (Hatiora rosea) with drooping bluish or dark green, sometimes, depending on the light, reddish shoots. The segments are small, up to 2.5×1 cm, with 3-5 faces or flat with scalloped edges. Areoles with bristles and hairs create gentle pubescence along the edge. On each apical areole, 1-3 crimson or pink flowers appear, funnel-shaped, up to 4 cm in diameter. They are grafted onto pereskia and hylocereus. 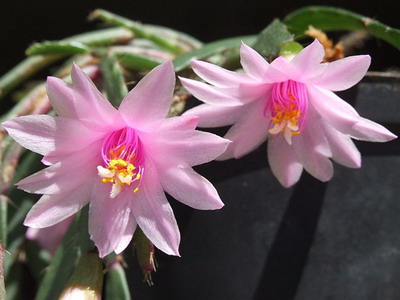 Hatiora salicornioides (Hatiora salicornioides) with thin articulated stems, growing straight or drooping, growing whorled. Segments 2-3.5 cm long have an original shape, club-shaped or bottle-shaped, for which the species was called “drunkard’s dream”. The flowers are small, up to 1 cm long, bell-shaped, yellow, orange or salmon, located on the apical areoles of each shoot. The plant is also called hatiora salicorniform, hatiora saltwort, and also for the original shape of the bush “dancing bones cactus”. 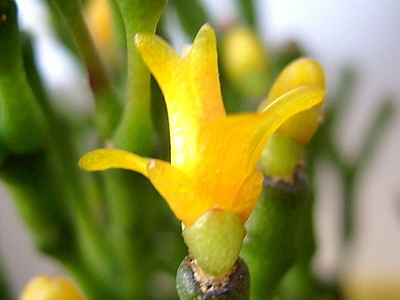 This unpretentious indoor plant does not require complex care. Hatiora develops well in bright diffused light on windows facing west and east, it can grow on a north window, but it does not bloom so abundantly there. On the windows of the southern orientation requires shading from the midday sun. In summer, it is useful to take it out into the air, to a bright place shaded from direct sun, for example, to a garden, hanging the pot from the lower branches of trees.

The soil prefers light, breathable, slightly acidic. You can use a mixture of sand and sod, humus, leafy soil in a ratio of 1:1:1:1. If the soil is less nutritious, the plant will bloom weakly, or not bloom at all.

The temperature regime in different periods of the year is not the same. In summer, with active growth, hatiora is kept at 18-22 ° C, in September-October, when the plant goes into the dormant phase for 6-8 weeks, at a temperature of 12 ° C to 16 ° C. Then, for the time of flowering, the cactus is placed in heat, after which it again goes into a dormant period and is transferred to a cool room for a month.

Watering is carried out with settled soft water not lower than room temperature, during the growth of the stems and during the flowering period – moderately, as the earthen clod dries, draining the remaining water from the pan, during the dormant period – very limited and carefully. Watering with cold water, as well as waterlogging when kept in cool conditions, can lead to root rot.

Unlike most cacti, hatiora requires high humidity. In the summer, it is sprayed daily, or the pot is placed in a tray with wet pebbles so that the bottom does not touch the water.

During flowering and active growth, 2 times a month, fertilizing is carried out with mineral fertilizer with an average nitrogen content and without calcium.

During dormant periods do not feed or spray.

Transplantation is carried out immediately after flowering, for young ones annually, for adults after 2-3 years and no more than 4-5 years for large specimens.

The main method of reproduction of the hatiora is the rooting of cuttings, which is produced immediately after flowering. A broken stem section with 2-3 segments is sprinkled with crushed coal and dried, after which it is placed in a wet mixture of sand and peat. 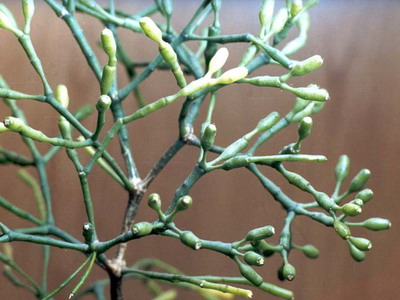 The plant can be grafted onto a prickly peresky. The grafting is done in the summer, the branched part of the rootstock is removed, leaving a bare trunk, which is split from above. As a scion, a hatiora stem with 2-3 segments is cut off, the end is sharpened with a wedge and placed in a split. The vaccination site is fixed, for example, with a needle, fixed with a plaster or thread. The bandage is removed after the scion begins to grow, which usually happens after 15-20 days at 18-20 ° C. Shoots growing below the graft are removed. Grafted hatiora cacti are distinguished by especially abundant flowering.