For decorative bells common in gardens, growing and caring for them does not present any particular difficulties, since the cultivated species are mostly unpretentious and can adapt to various conditions of existence. However, the large size of the buds, the preservation of decorativeness throughout the growing season, long and continuous flowering are possible only if conditions are optimal for the culture and the specifics of agricultural technology of various species are taken into account.

General recommendations for growing and caring for bluebells

Most cultivated species prefer open, well-lit places, but some naturally growing in the forest belt develop better in partial shade and even shade. At the same time, even light-loving varieties tolerate partial shade well and in such conditions bloom longer than in the open sun.

When choosing a place for planting bells, you need to take into account that the culture does not tolerate stagnant rain or melt water, low areas with heavy clay or loamy soil are not suitable for it. The soil should be drained, loose, well fertilized, with a neutral or slightly acidic reaction. Some species of rocky origin need poor soil with a slightly alkaline reaction, in which case it is preliminarily limed. To improve the structure of clay soils and loams, sand, weathered peat and a small amount of mineral fertilizers are added to them; leaf humus, soddy soil or rotted compost are added to insufficiently nutritious sandy soils. Fresh peat and manure are not recommended, as this can provoke fungal diseases.

Planting and transplanting bushes is carried out in spring or autumn, they do it very carefully, with a large clod of earth, since all bells have numerous thin adventitious roots that can be easily damaged. For better survival, abundant watering is required after transplantation; prepared wells are also recommended to be pre-watered. For varieties with powerful taproots (crowded, broad-leaved, etc.), the optimal planting time is early spring, and for crops with less developed roots, May is preferable, when the soil is already warm enough. The timing of the autumn planting should be chosen so that the bushes have time to take root before the onset of frost, it is best to carry out such work from late August to early September. There are species with a compact surface root system that can be transplanted even in flowering state.

Of the care measures, bluebells need regular weeding and loosening, especially necessary in the first half of summer, before flowering, moderate watering in dry weather and regular feeding. At the beginning of the season, nitrogen is applied, which contributes to the growth of the vegetative mass and early flowering, then, in the summer, complex or phosphorus fertilizers, and in the fall – potassium, which increases the winter hardiness of the crop. For species that prefer a neutral and alkaline soil reaction, it is useful to apply ash, which further reduces acidity. For top dressing, you can use rotted manure or mineral fertilizers.

To increase the duration of flowering, it is recommended to regularly remove dried flowers. Only those from which they plan to receive seeds are left, which are collected after browning, but before opening the boxes, in order to avoid self-seeding. In tall bells, faded shoots are completely cut off.

Most garden species are winter-hardy and do not need shelter, only a few, originating from the southern regions of Europe and Asia, are lightly sprinkled with a dry leaf, peat or spruce branches. At the end of autumn, in all species, the stems are cut at the root.

Reproduction and cultivation of bells from seeds

The culture can be propagated by seeds and vegetatively, the methods of reproduction of each particular species largely depend on its biological characteristics.

Reproduction of bluebells by growing from seeds is the most universal method, the only one possible for annuals , successfully used also for biennials and perennials. There are only a few exceptions, including terry varieties, in which seedlings may not repeat the characteristics of parent plants, or seeds may not be tied at all.

Sowing is done directly into the ground in autumn, usually in the second half of October, or in spring, in May, or for seedlings – in March in boxes. When growing bells from seeds, light, loose, breathable soil is used, consisting of sand, soddy or leafy soil and weathered peat. Organic fertilizers are not added.

The seeds of the bells are very small, so they are laid out directly on the surface of the soil, if necessary, only lightly sprinkled with sand. Seedlings germinate in two weeks, during autumn planting – 10-14 days after the ground thaws. Note that for many species, seeds germinate better after stratification; in this case, winter sowing is preferable.

After the appearance of three true leaves, the seedlings dive at a distance of 10×10 cm. Young plants are planted in the garden in a permanent place in early June. The seedlings bloom the next year. Almost all cultivated varieties are self-seeding.

Vegetative propagation methods are used for biennials and perennials. At the same time, perennial bells with a taproot or carpal root system are considered vegetatively immobile and are grown only from seeds. A number of species with short rhizomes belong to the category of vegetatively inactive, they can be divided and cuttings. Finally, the last group of plants, called vegetatively mobile, has long creeping rhizomes, so it can be propagated not only by seeds, division or cuttings, but also by root suckers, as well as segments of rhizomes.

The division of bushes can be carried out in the third – fifth, and for some species even in the second year of vegetation. To do this, large bushes are dug up at the beginning of May or at the end of summer, the above-ground part is cut off, divided with a sharp knife or shovel so that each division has a sufficient number of roots and several renewal points, and immediately planted in a permanent place, without forgetting to water it abundantly .

When propagated by segments of rhizomes, the latter are dug up, divided into segments so that each has several renewal buds, and planted in the ground, making sure that the buds are at the level of the soil.

Root offspring are separated from the mother bush and planted separately immediately in a permanent place.

For almost each of the cultivated types of bluebells, planting and care has a number of features that you need to know in order to provide them with optimal conditions for development. Consider the agricultural technology of some of the most common varieties in our gardens.

Carpathian bell. Growing this undersized species does well in sunny or semi-shady areas and loose drained lands of neutral or slightly alkaline reaction with a moderate amount of nutrients. Too fertilized soil leads to a decrease in winter hardiness and rapid aging of the bushes. 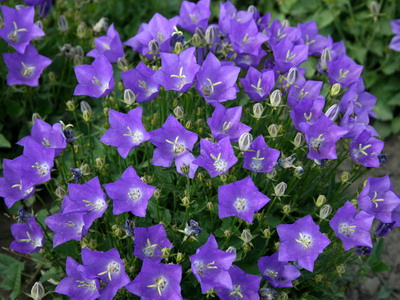 The advantages of culture include ease and ease of care. The Carpathian bluebell is drought-resistant, requires watering only in hot weather. The top dressing regime is standard, nitrogen is applied in spring, complex mineral fertilizers are applied during flowering. The plant needs regular loosening and weeding. Flowering is plentiful, lasts from June to September, to stimulate it, faded shoots are shortened by about a third, in October the entire aerial part is completely cut off.

The lack of culture is its fragility, in one place the bushes grow no more than two or three years, after which they usually freeze out, since the renewal buds are brought to the surface. To preserve the flower, it must be divided every two to three years, preferably in early spring, cuttings or regularly re-sown. Reproduction of the Carpathian bell by growing from seeds makes it possible to obtain a lot of planting material at once, its method does not differ from the standard one described above.

Bell peach belongs to the group of medium-sized species. The culture is very tolerant of lighting conditions, it can grow both in the open sun and in the dense shade of trees, which is its undoubted advantage. It is also unpretentious to the composition of the soil, it develops well not only on sandy, but also on clay lands. The mode of watering and fertilizing is the same as that of the previous species. 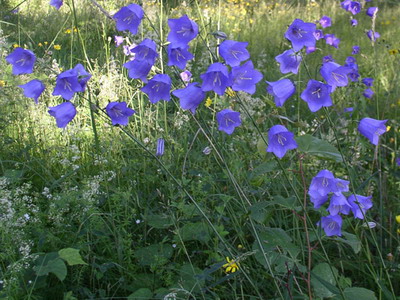 Loosening can be attributed to mandatory agrotechnical methods, since the culture does not tolerate stagnant water. Flowering time – more than 30 days from mid-June, to extend it, you need to regularly pinch off faded flowers.

Growing peach bellflower is not particularly difficult, but the plant is short-lived, usually disappearing after two to three years, so it is recommended to renew it regularly. It is preferable to divide the bushes in early spring, replant with a large clod of earth. The culture is easily cut, green and semi-lignified cuttings are taken from the middle part of the trunk, rooted in the sand. It is also possible to use root cuttings. The species is easily propagated by seeds, which are planted in May directly into the ground or in March for seedlings. Seedlings bloom in a year. It must be remembered that when grown from seeds, peach-leaved bells with double inflorescences, as well as varietal plants, do not inherit parental characteristics, therefore only natural forms can be propagated in this way.

Bell dot – a very decorative medium-sized (50-70 cm) plant. In nature, it lives in forests and shrubs, so the agricultural technique for growing a dotted bell is somewhat different from most other garden species. It is quite moisture-loving, requires regular moderate watering, grows well in partial shade. 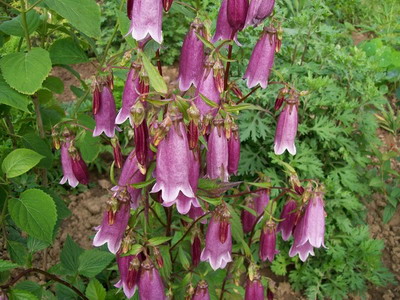 Natural forms grow strongly and can fill a fairly large area. To limit the growth of the bush, you can use, for example, a plastic flowerpot. Varietal plants are much less aggressive. The plant blooms in May-June, after which it loses its decorative effect and goes into a dormant state. Easily propagated by dividing curtains, root layers, natural forms – by seeds. Landing is done in early spring or after flowering, but this viable species takes root well at any time of the year.

Campanula crowded and its cultivation

The bell is crowded – undersized (10-60 cm) perennial is very unpretentious and unusually tenacious. It develops best in sunny areas, but tolerates partial shade well, requires loose, well-drained, nutrient-poor soil. It blooms for a long time, from July to September. 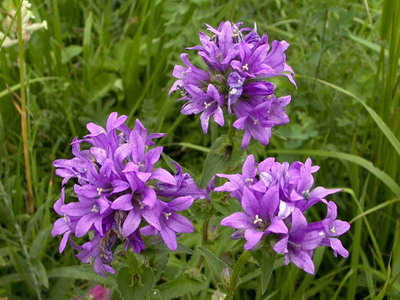 Cultivation of a crowded bluebell is not difficult, it is drought-resistant, has a compact, little growing bush, needs only loosening and weeding, timely removal of faded shoots and regular renewal every three to four years. Numerous varieties are propagated exclusively vegetatively, by early spring division of the bush or summer cuttings. For rooting cuttings, it is better to use greenhouses. Seeds propagate only natural forms.

Types of bells and their photos