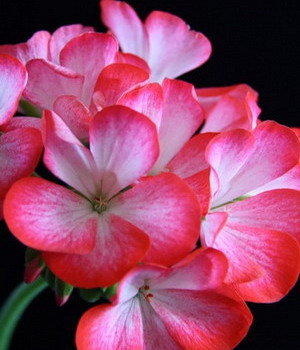 In our gardens and flower beds, both winter-hardy garden and heat-loving varieties of geraniums are grown, the latter are used as annuals or in indoor culture.

About 40 species of garden geraniums are found on the territory of Russia, some of them successfully withstand the climate of the middle zone and are bred as ornamental plants. They can be classified by height, flowering time, growing conditions.

Flowering of various types of geraniums in the photo

According to the timing of flowering, species that bloom at the end of May are distinguished – 20-30 days: 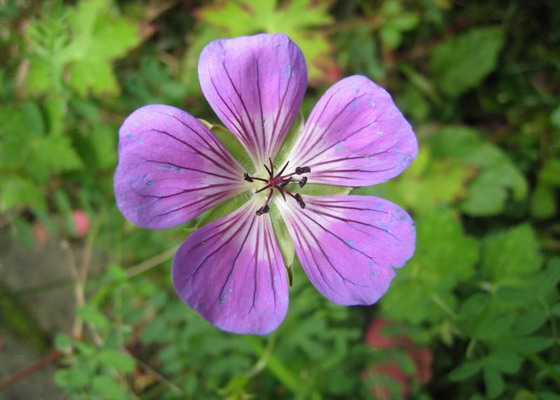 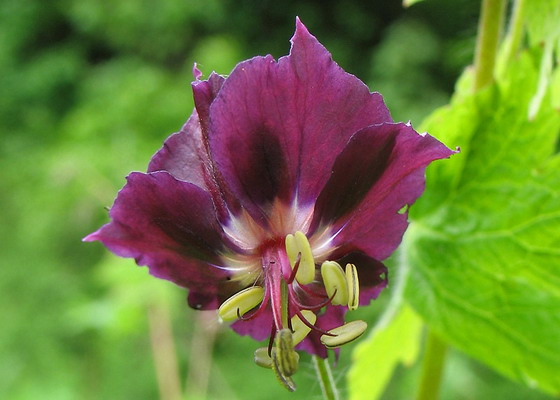 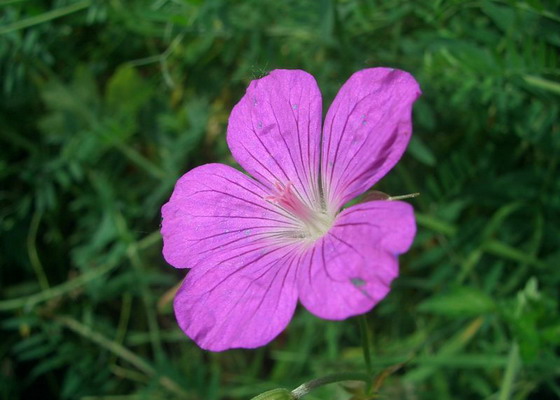 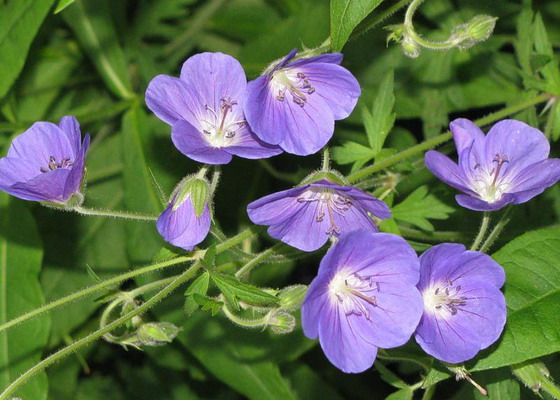 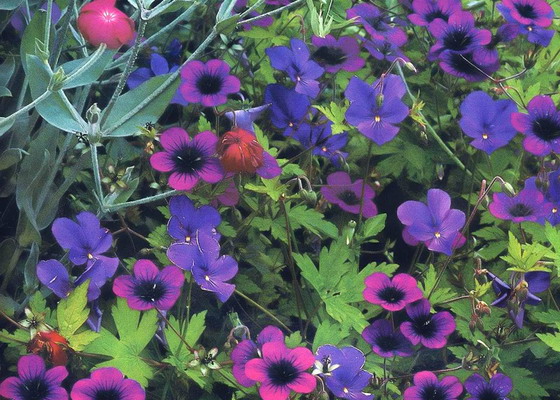 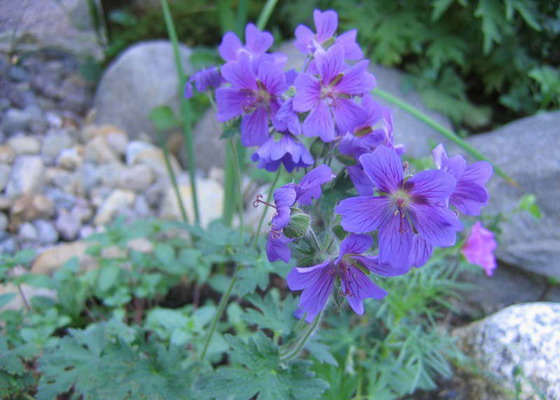 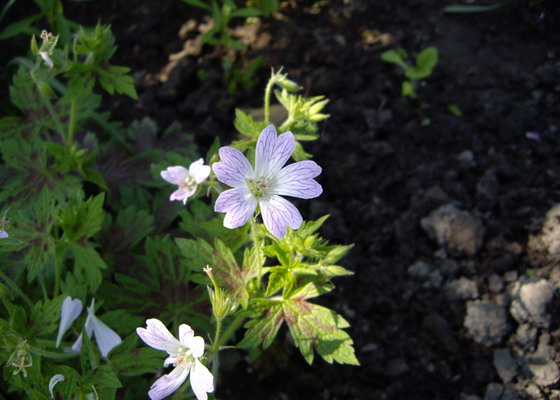 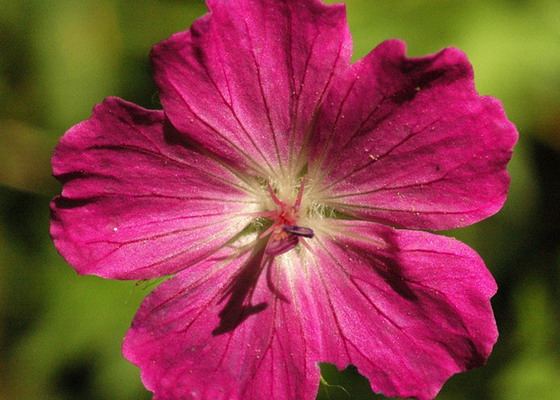 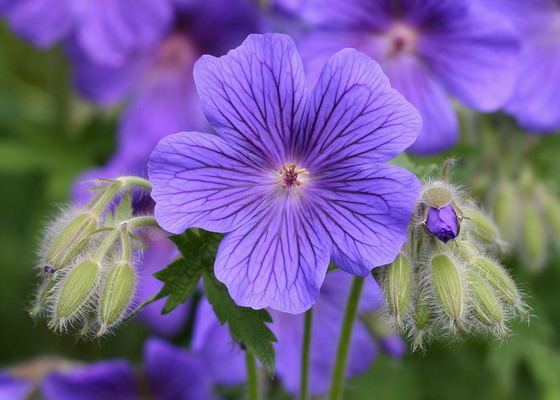 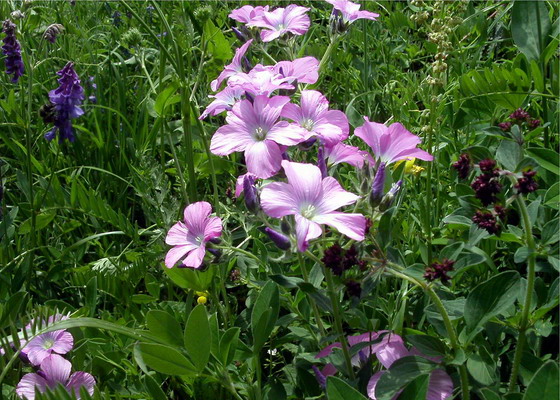 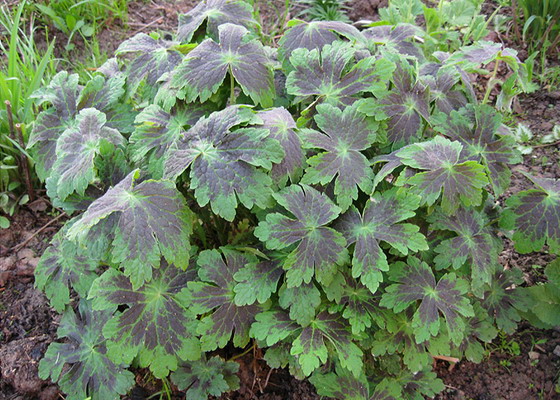 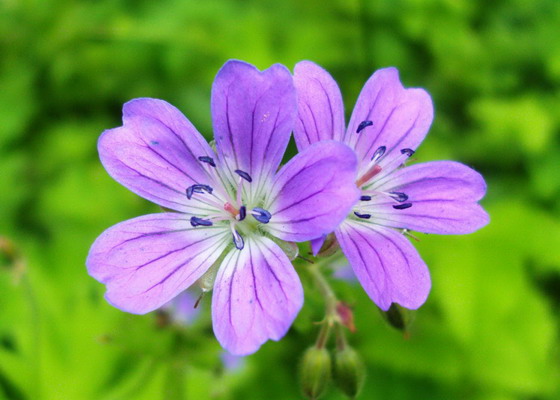 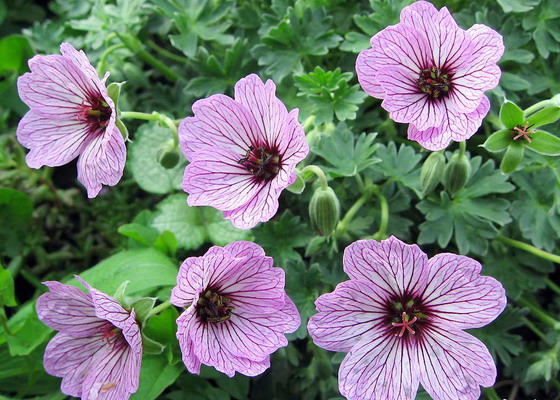 There are varieties of geraniums with yellow or red autumn foliage (Georgian, large-rhizome, flat-petal, small-stamen, etc.), and evergreens (blood-red, red-brown).

The following are descriptions of the most popular types and varieties of geraniums.

Of the tall garden geraniums in gardens, the following are most often grown: 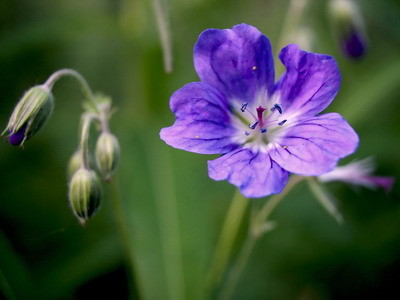 An inhabitant of shady forests and bushes in the temperate zone of Eurasia. Bushy plant 30 – 80 cm high with a few decaying straight pubescent stems and an almost vertical thickened rhizome. Leaves on pubescent petioles coarsely serrated, seven-parted, form a basal rosette. Flowers, 2 on protruding peduncles, numerous, widely opened, violet or lilac-purple, collected in a loose inflorescence. Prefers partial shade and moist, humus-rich soil. Blooms in May for about 20 days, often re-blooms in August. 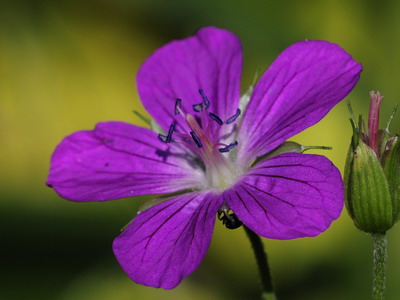 It has numerous garden forms and varieties:

One of the most attractive varieties of geraniums, distinguished not only by their beauty, but also by their unpretentiousness, disease resistance and longevity. Perennial plant with a short thick rhizome, forming a powerful bush 60-80 cm in height. Leaves, up to 20 cm long, on pubescent cuttings, form a basal rosette, have a rounded shape, jagged edges and a greenish-bluish color due to pubescence, acquire a reddish color in autumn. The flowers are large, up to 4.5 cm in diameter, purple with purple veins, collected in an umbrella inflorescence. Blooms profusely from mid-June for 40 days. Prefers a sunny or semi-shady location, can grow in one place without transplanting up to 12 years. 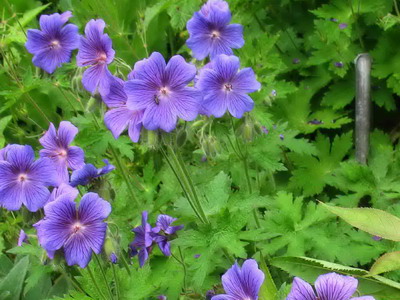 A rhizomatous plant native to Himalayan subalpine grasslands. It forms a bush 30-60 cm high with rosettes of large (up to 10 cm in diameter) rounded, unevenly dissected, pubescent leaves. The flowers are bluish-violet with reddish veins, large, up to 5 cm in diameter, fragrant, arranged 2 per peduncle, collected in a corymbose inflorescence. It blooms profusely from the end of May throughout the summer. It has been grown as an ornamental crop since the end of the 19th century. Grows slowly, planted in sunny places, withstands partial shade. Drought tolerant, requires loose soils with good drainage, and low humus content. 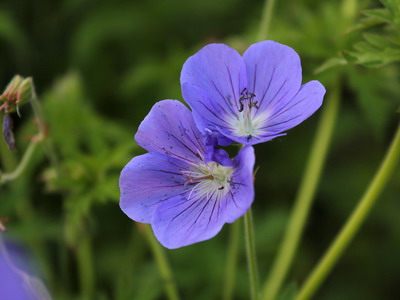 This species served as a source for the creation of a number of hybrid varieties of geraniums, characterized by long flowering. Thus, the Jonson’s Blue variety, a hybrid of Himalayan and meadow geraniums, with blue petals, lighter at the base, has gained great popularity among flower growers for its long and abundant flowering.

Cultivar Rosanna (Rosanna) , a hybrid of Himalayan geranium and Buxton’s Variety geranium Wallich (G. Wallichianum), in 2008 in the United States was recognized as the plant of the year. The flowers of this geranium are blue with dark stamens and a white core, large, it has an unusually long flowering period, from late spring to frost. 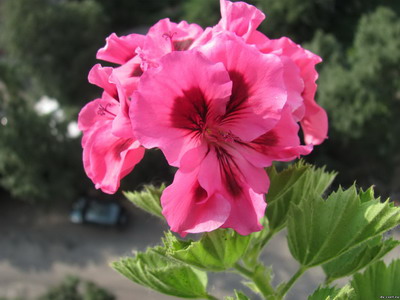 A hybrid species obtained by crossing Georgian geranium and flat-leaved. It grows to a height of 40-70 cm, blooms in July with large lilac flowers up to 5 cm in diameter. Drought-resistant, requires fertile soils and well-lit areas, tolerates partial shade. 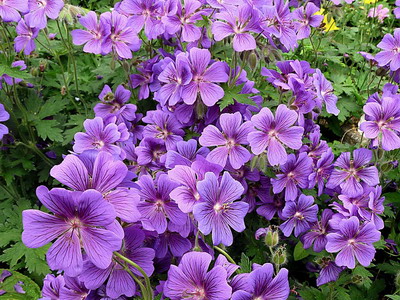 The most commonly grown stunted geraniums are:

In nature, it grows along the edges, glades in light forests, shrubs, on dry southern slopes. Perennial herbaceous plant 20-50 cm tall with straight, forked-branched stems covered with long hairs that turn red at the base along with the lower part of the leaves in autumn. Leaves petiolate, palmate, seven or five-parted, pubescent below, overwintering. Refers to evergreen species. The flowers are blood-red, solitary, located in the axils of the leaves. Blossoms in June-July 40-45 days. Grown in gardens since the 16th century. Prefers well-drained calcareous soils and a sunny to semi-shady location. Drought-resistant, durable, can grow in one place up to 15 years. 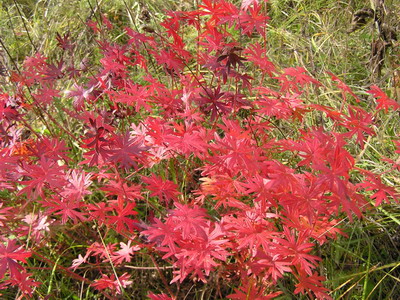 There are many varieties of various colors, including:

Perennial plant with thick branching rhizome. The stems are straight, 20-30 cm high, the basal leaves are petiolate, the upper ones are sessile. Leaf blades are large-toothed, three-, five-, seven-parted, bright green, turning red or yellow in autumn. The flowers are dark pink, collected in an umbrella-shaped inflorescence. Blossoms in June 20-30 days. The stems and leaves are pubescent, all parts have a strong aroma. In culture since the 17th century, it is grown in gardens both in the south and in the north of Europe. Groundcover, forms dense clumps, but grows slowly, can be easily controlled. Drought-resistant, prefers a sunny location, but tolerates partial shade and even shade. Grows in any soil with good drainage. 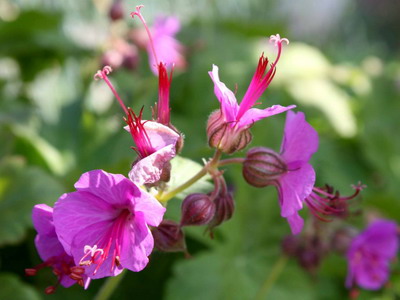 The plant comes from the southern regions of Europe, undersized, 10-15 cm in height. Forms a bush with rounded, bluish-green petiolate leaves with 5-7 lobes, above which stems rise with two lilac-pink flowers. There are varieties of white, pink, purple color. It has been used in culture since 1830, grown in rockeries. Requires a sunny location, fertile calcareous soil, good drainage and protection from waterlogging in winter. Blooms profusely from July to August. 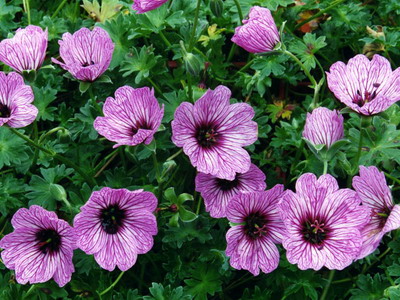 Of the existing varieties often grown:

The most common species, grown both indoors and in the garden in an annual culture. Bush plant with straight juicy densely leafy trunks, rounded, slightly wavy pubescent leaves with an original color. The leaf plate is bright green with a red-brown border. There are varieties with bronze, golden foliage with a white or yellow border. The main advantage of the species is abundant and long flowering. Zonal geranium flowers have a wide variety of colors, from pure white to crimson, collected in an umbrella inflorescence on a long leafless peduncle. Flowering time – in the ground from spring to autumn, at room conditions – with proper care almost the whole year. 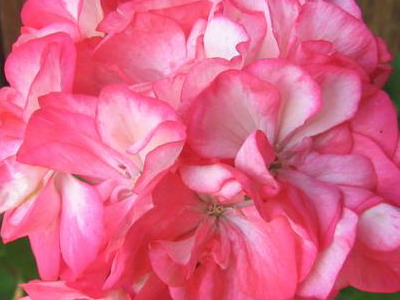 Currently, more than 75,000 varieties of zonal geraniums have been created. There are plants from 10 to 80 cm in height, with simple, semi-double and double flowers, the most diverse in shape and color. The color of the petals is not only monophonic, but also variegated, with specks and spots, as well as two-color, three-color. In some varieties, the leaves have a bright color with a border of various colors and widths or a contrasting spot in the center.

Zonal geraniums are one of the most unpretentious indoor plants. They are drought-resistant, tolerate direct sunlight, do not require frequent transplants, and reproduce well by cuttings and seeds. In gardens they are grown as annuals, they develop better in sunny areas, they are not demanding on soil fertility.

The most famous non-terry varieties:

Ivy or corymbose geranium is an ampelous geranium

Ampel geranium has long, up to 1 m, hanging shoots with dark green small star-shaped leaves, shiny, resembling ivy leaves in appearance, which gave the name to the species. Flowers are simple, semi-double and double, up to 4 cm in diameter, with long pedicels, collected in racemose inflorescences. Coloring from pale pink and white to red and dark purple. Blooms profusely from spring to autumn, grows well. It is grown in hanging baskets and pots as a houseplant, used to decorate loggias and balconies, planted in gardens as an annual crop as a ground cover and climbing plant. Prefers a sunny place, requires moderate watering in summer, limited watering in winter. 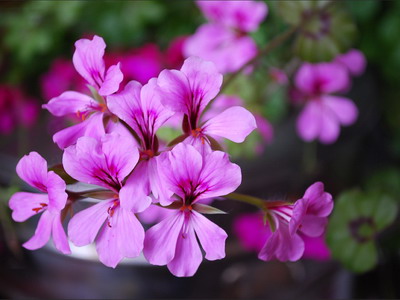 This species is distinguished by larger, up to 6 cm in diameter, and bright flowers, for which it received its other name, large-flowered geranium. The leaves are jagged, maple-like in shape, the flowers can be single or double, usually with a dark spot or stripes on the lower petals. It differs from other types of geraniums in that it is less drought-resistant; for laying flower buds in winter, it requires a temperature not higher than 10 – 12 С and additional lighting; it has a shorter flowering period in the room – about a month. When planted in the garden, it tolerates partial shade, where it blooms brighter and longer. Outdoors it can bloom all season. 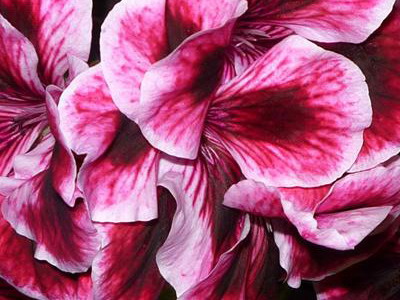 Indoor gerbera: care, growing from seeds and flowering in the photo