Dicentra (Dicentra): varieties and species in the photo. Cultivation of dicenters and care

Dicentra (Dicentra) – a genus of perennial and annual herbs belonging to the fumariaceae family, naturally grow on the North American continent, in Eastern China and the Far East. Valued in decorative floriculture for the original shape of flowers and unpretentiousness.

Description of the colors of the dicenter

The species used in ornamental floriculture are perennial flowering herbaceous plants from 15 cm to 1 m tall with thick straight branched stems, a fleshy, deep-lying rhizome and very decorative, twice or thrice dissected pinnate leaves of green or bluish-green color. Thanks to its leaves, the plant remains attractive even after it has faded.

The dicentra flower has an unusual shape, flattened in one plane, resembling a split heart, two outer dark-colored petals seem to open slightly, showing two inner, lighter ones. On the outer petals of the corolla there are hollow formations, spurs, in which nectar accumulates. Coloring can be pink, white, red, yellow, size – up to 3 cm in diameter. Dicentric flowers with thin petioles are located on thin curved branches, forming a drooping one-sided racemose inflorescence. The fruit is a box with small black oblong seeds that remain viable for 1-2 years. 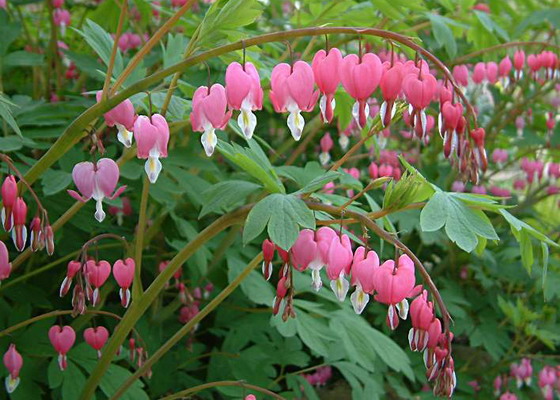 Dicentra in the photo

Different types of dicentras bloom at different times, which allows you to choose varieties that provide flowering from May to September. The culture is used not only as a garden plant, but also as a house plant , some varieties lend themselves well to forcing.

The rhizomes of the plant contain poisonous alkaloids, so it is recommended to use gloves and be careful when working with them. Sometimes during rains, the roots come to the surface, and if they are accidentally eaten by livestock, they cause the death of animals.

Origin of the name, history and legends

The Latin name of the plant comes from two Greek words, “dis”, or “twice”, and “kentron”, or spur, and can be literally translated as “double spur”, which reflects the structure of the corolla of the flower. In different countries it is called differently, in Germany – “flower of the heart”, in France – “Jeanette’s heart”, in England – “locks and keys”, “lyre flower”, there are also the names “bull’s head” or diliktra. In Russia, the name by which everyone knows the dicenter is “heartbreak”.

There are many legends and beliefs about this plant, all of which are inspired by the unusually expressive shape of a flower in the form of a heart and the drooping shape of inflorescences, and are associated with love and marriage. So, the French legend tells how young Jeanette got lost in the forest, and a beautiful young hunter saved her. The girl fell in love with her savior, but a few days later she saw him in the company of a blond beauty. Poor Jeannette’s heart broke with love, turning into a lovely dark pink flower. In Germany, there is a belief that if a guy or a girl breaks a dicentra, then carrying it, on the way home, they will certainly meet their betrothed or fiance.

The first description of the culture, namely, its type of dicenter is magnificent (D. spectabilis), is given in the writings of Carl Linnaeus in 1753. The flower came to Europe from Japan in 1816, after which it began to be widely grown in gardens as an early flowering unpretentious plant. 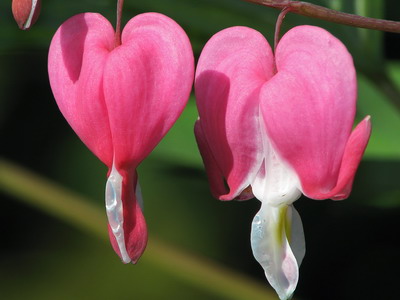 Some varieties and types of dicentra grown in the garden

There are 20 species in the genus, of which only one grows wild in Russia, about ten are used in cultivation. The following are the most commonly grown cultivars and types of dicentra currently grown.

Below are photos of dicenters of some species and varieties:

Magnificent dicentra (D. spectabilis) , other names: magnificent heart flower, broken heart, spectabilis dicentra, perennial up to 1 m high with large pinnately dissected leaves, green above, bluish below, located on long, up to 12 cm, petioles. Stems fleshy, branched, densely leafy. Heart-shaped flowers up to 3 cm in diameter are collected in inflorescences-brushes up to 20 cm long at the ends of the stems and in the axils of the leaves in the upper part of the shoots. It blooms in May-June for about a month, after which the above-ground organs die off, and the plant goes into a dormant state until spring. 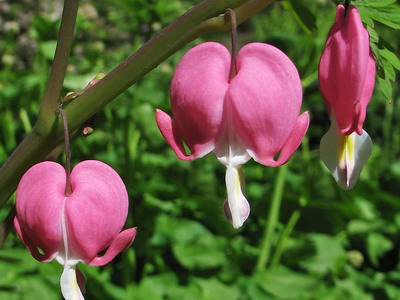 There is a white-flowered form, dicentra Alba, shorter, up to 70 cm. 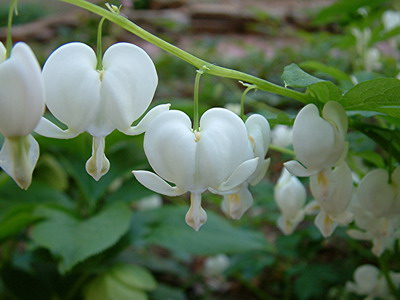 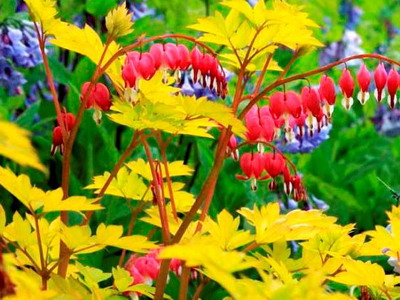 Beautiful dicenter (D. Formosa) , Formosa dicenter, or Taiwanese. Low-growing, up to 40 cm, species with light green leaves and white, cream or pink flowers, blooming from June to September. In one inflorescence, you can simultaneously see both fully bloomed flowers and buds. 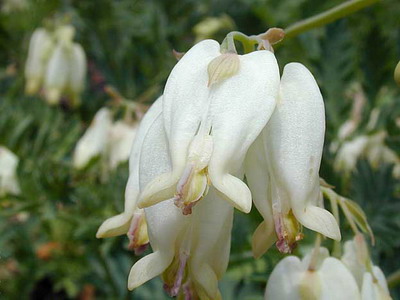 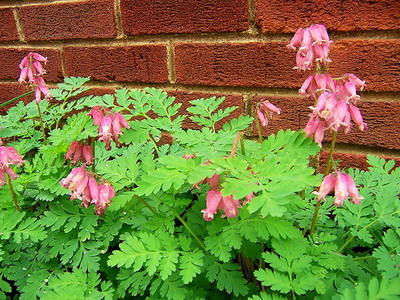 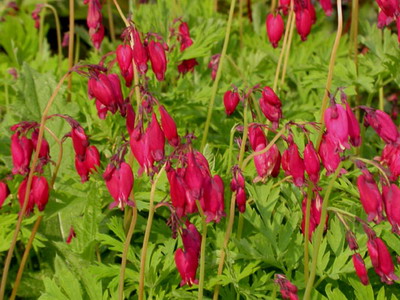 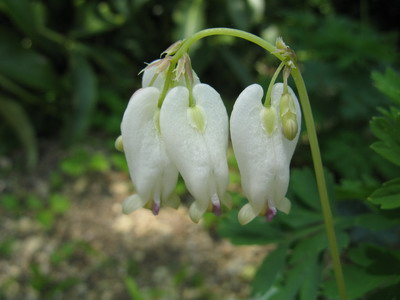 Dicentra exceptional or excellent (D. eximia) , even shorter, up to 25 cm, with bluish-gray leaves, similar to fern leaves, and dark purple, pink or white flowers. Blooms within 2 months, although not as profusely as other species Can be used for winter forcing. 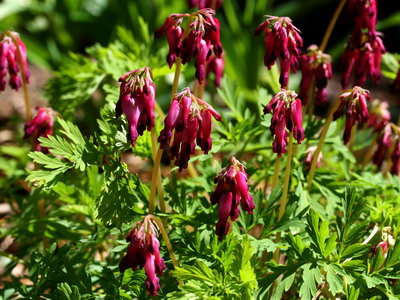 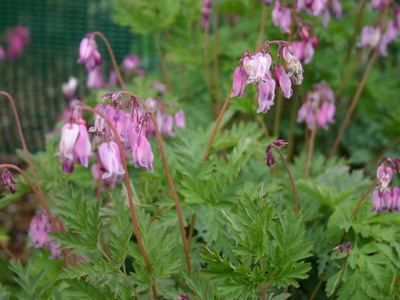 Dicentra klobuchnosnaya (D. cucullaria) , a miniature flower 15 cm tall with a tuberous root and white or pink flowers. The leaves of the plant are poisonous and are used medicinally. 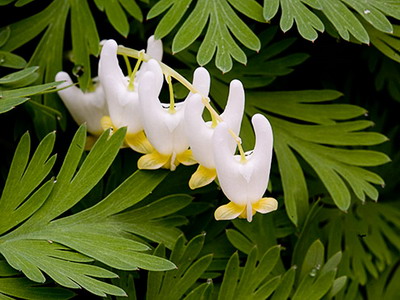 Dicentra climbing (D. scandens) , dicentra skandens, a liana up to 2 m high, a native of the Himalayas, blooming in mid-summer with white-pink or yellow flowers. In the middle lane, it is most often grown in an annual crop.

There is a frost-resistant variety Golden Tears, with yellow flowers with a pink tinge, blooming from June to late autumn. 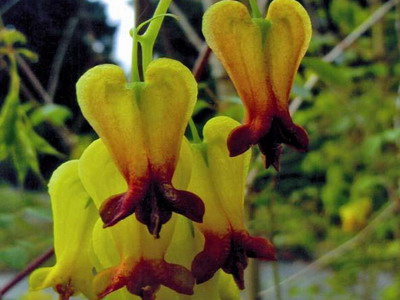 Dicentra wandering (D. peregrina) , one of the relic plants, its age is more than a thousand years. Miniature, up to 15 cm, a plant with strongly dissected bluish leaves and large purple-pink or white flowers on thin peduncles. Perfect for growing on an alpine hill. 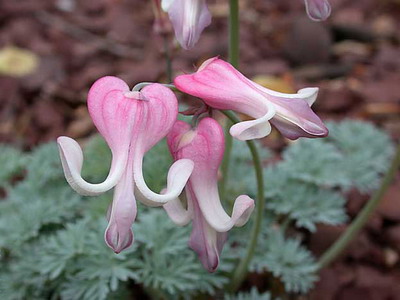 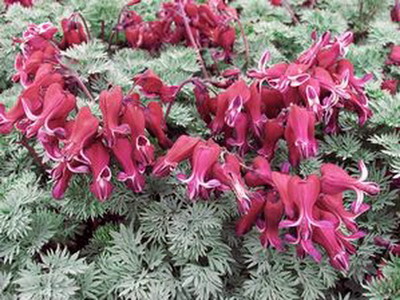 Recommendations for the care and reproduction of dicentra

For all decorative species, planting and care is not a difficult task. They develop well in the conditions of the middle lane, hibernate without shelter. They can grow both in the sun and in the shade, in the latter case, flowering begins later. The most favorable semi-shady place where the plant blooms longer and more abundantly. For growing dicentras, choose light, slightly acidic soils with a sufficient supply of nutrients, well-drained. The culture is unpretentious, but does not tolerate waterlogging, in which the fleshy roots rot.

Planting is done in spring or autumn, holes for seedlings are prepared in advance. In autumn, mineral fertilizer (about 20 g per 1 m2) and humus, up to 5 kg per 1 m2, are applied to the soil, then planting pits are prepared with a diameter and depth of at least 50 cm. If there is a threat of stagnant water, drainage is provided by pouring crushed stone or broken bricks. With heavy soil, river sand, leafy soil are added to the soil. The hole is shed with water, planting is carried out no earlier than in 15-20 days or in the spring.

In the future, the plant does not require complex care. They feed it 2-3 times during the season, in the spring – with superphosphate, then during the growing season a couple more times with complex mineral fertilizer. Young shoots can be damaged by spring frosts, when they are threatened, the flower needs shelter. In the heat, the soil under the bushes is mulched, which will protect the roots from drying out and provide them with additional nutrition. Water moderately, wilted inflorescences are removed, which prolongs the flowering period. In autumn, the stems are cut, leaving stumps of 3-5 cm. 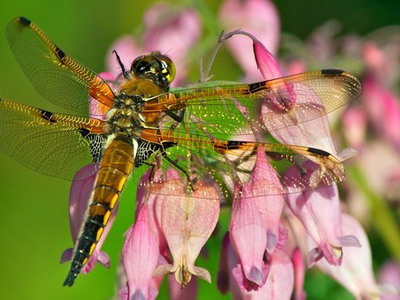 Reproduction dicentra in the photo

The plant grows in one place for no more than 5-7 years, then the roots grow strongly and partially die off. The optimal period for dividing and transplanting a bush is 3-4 years. The root is carefully divided with a sharp knife so that the size of the division is 10-15 cm, and it has 3-4 healthy shoots. Planting material is immediately planted in prepared holes. You can plant 2-3 pieces together, then the bush will bloom in the first year.

The plant can also be propagated by cuttings, which are used as young shoots. They are harvested: at the magnificent dicentra – in the spring, at the beautiful dicentra – the whole season. Planted in light soil under the film. Seedlings take root in a few weeks. Young plants are planted in a permanent place in the spring of the next year, for better survival, they try not to injure the roots.

Seed propagation of culture is difficult and is not practiced in amateur floriculture.

Tropical plants, when grown at home, have specific requirements for the...
Read more