Diascia (Diascia): photo, description and cultivation of a flower from seeds or seedlings 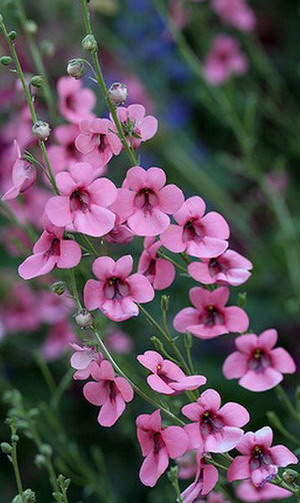 Diascia (Diascia) is a genus of annuals and perennials of the norichnikov family (Scrophulariaceae), which naturally grows in South Africa. Beautiful flowering ornamental plant.

Description of the flower diascia

Low-growing plants with straight or creeping stems, small sessile serrated leaves ovate or elliptical in shape. In nature, they grow up to 1 m, in gardens they do not exceed 20-35 cm. Individual branches creeping along the ground or hanging from hanging containers can reach 60 cm. The diascia flower is no more than 20 mm in diameter, in appearance it resembles a snapdragon flower. The perianth is tubular, with five lobes, spurs stand out on the top two, the bottom three are larger, forming the so-called. lower lip. Numerous flowers of pink, orange, salmon, purple colors stay on the stems for a long time. Below are photos of diascia during the flowering period.

There are more than 50 species in the genus, some of them are annuals, grow in the flat part of the natural range, others, inhabitants of mountainous regions, are perennial. The latter are common in Europe as ornamental plants. Only a few of them tolerate temperatures down to -15 ° C and winter in a fairly warm climate, however, ease of care, ease of reproduction, rapid growth and abundant long flowering have made the flower a popular annual crop. Numerous drooping stems dotted with flowers are especially showy when grown in pots and containers. Flowering is undulating, the first wave lasts 1-1.5 months from the beginning of summer, then, after pruning, the bushes bloom again until mid-autumn.

Bearded diasia (D. barberae), low, up to 30 cm, a plant with small dark green shiny leaves, forms a wide bush and begins to bloom already at a height of 7-10 cm. The flowers are small, numerous, light pink with a yellow center. This species is most often used in an annual crop, it is its seeds that are usually sold in flower shops. It is more drought tolerant than the others and is better adapted to growing in hanging containers. 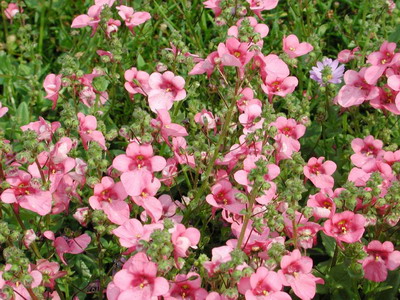 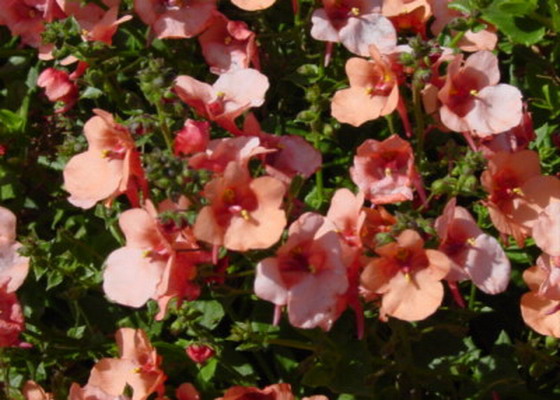 Apricot Apricot Queen in the photo.

Basya , diasia with bright pink velvet flowers up to 2 cm in diameter. 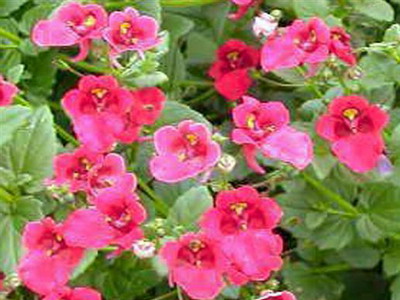 The common variety Ruby Field is the result of crossing the bearded and heart-shaped diascias (D. Cordata) . Its pink flowers with a dark center are planted both in pots and in flower beds. 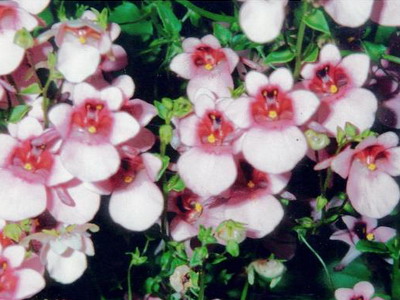 Diasia felt (D. fetcaniensis) , up to 25 cm high, one of the most hardy species, can grow in partial shade, tolerates frosts down to -15 ° C. Thanks to the pale green heart-shaped leaves, covered with soft fluff, it is decorative even without flowers. Pink flowers up to 2 cm in diameter bloom from July to September. 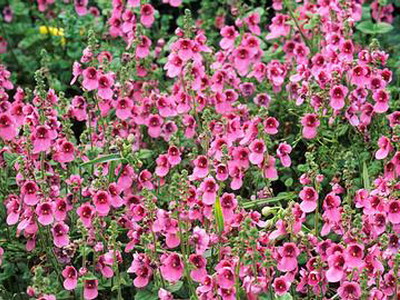 Of the hanging diascia species grown in pots, the vigilant diascia (D. vigilis) should also be noted, the shoots of which, 50 cm long, are covered from June to September with light pink inflorescences. 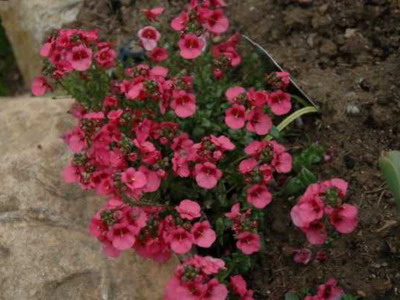 Diascia: growing from seed and care

To successfully grow diasia, you need to know some of its features. The natural habitat of the flower is the eastern slopes of the Dragon Mountains of South Africa with their heavy rainfall, which means that the plant needs a warm, sunny place and moist slightly acidic soil. It does not tolerate stagnant water, so when planting in a flower bed, sand is added to the soil, in pots or containers they provide good drainage. During flowering, water abundantly and regularly.

The culture does not need too fertile soil and intensive feeding; with excessive nutrition, it stretches and blooms less. It is enough to feed it once a month with a complex flower fertilizer or use long-acting fertilizers.

Withered buds are regularly removed, after flowering, a radical pruning is carried out, leaving stems 5-7 cm long, after which the plant is watered and fed abundantly. This technique stimulates the growth of new shoots and a second wave of flowering.

When frost occurs, diascia is usually thrown away, but you can plant it in a pot with loose soil and transfer it to a bright room with a temperature of about 5 ° C for wintering. In winter, watering is limited, in the spring they are transplanted into a fresh substrate and placed in a warmer place, cutting the stems in half. To form a lush bush, young shoots are pinched several times. With the onset of heat, the flowers, after preliminary hardening, are taken out into the fresh air or a garden is planted. Feed regularly before flowering.

Diascias are propagated by seeds and cuttings. Stem cuttings at the end of summer are rooted in a moist substrate at room temperature. In autumn, it is also possible to separate root cuttings. Rooted seedlings overwinter in the same way as adult plants.

When growing diasia from seeds, they are sown in February, pressing into the surface of the soil without sprinkling with earth. Before germination (1.5 – 2 weeks), plantings are kept at 18-19 ° C, then they are transferred to a cooler place, not higher than 15 ° C.

Seeds are distinguished by good germination, seedlings, despite their miniature size, are very hardy, tolerate picking well, develop quickly and begin to bush early. In the last days of May, seedlings are planted in open ground at a distance of 12-15 cm from each other. Ampelous diascias are placed in several pieces in one container.

Plants from cuttings bloom in late spring, grown from seedlings – by mid-July. In the southern regions, seeds can be sown directly on flower beds in April-May, but they will bloom only at the end of August.

Indoor gerbera: care, growing from seeds and flowering in the photo