Despite the fact that growing clerodendrum at home is fraught with certain difficulties, the exceptional decorativeness of the culture contributes to its popularity among indoor plant lovers. Lush and long flowering, beautiful large leaves, the ability to form an arbitrary bush, including an ampelous form, make the flower a real decoration of any interior. To grow a healthy, regularly flowering plant, you need to know what conditions are optimal for different types of clerodendrum, how to care for and propagate them correctly. Below are the main recommendations for cultivating a flower in rooms.

How to care for Clerodendrum

The place for the plant is chosen so as to provide it with bright diffused lighting. East and west windows are best suited for these purposes; on the north, due to lack of light, the bush will not bloom, and may even shed its leaves. On the southern windows, shading is necessary at noon.

The most favorable temperature regime is moderate heat (from 18 ° C to 25 ° C) throughout the year, with the exception of a short dormant period, when the temperature is lowered to 12-18 ° C.

The culture does not tolerate dry air, maintaining its high humidity is an essential element of care. Clerodendrum needs regular spraying, which is best done in the evening using soft, pre-settled water. For additional moisture in the summer, it is recommended to place the pot on a pallet filled with wet moss, pebbles or expanded clay. In winter, the plant should not be kept close to central heating batteries. During the cool wintering period, it is better not to spray.

Rapid growth and abundant flowering in spring and summer require abundant watering, while, since all species are very sensitive to stagnant water, its excess must be drained from the pan. If the plant is kept cool in winter, watering is limited, while at the same time preventing the earthen coma from completely drying out. Water is better to use soft, without impurities of chlorine.

When growing clerodendrum at home, care should include regular top dressing, which during active growth is carried out at intervals of one to two weeks, adding fertilizer for flowering crops to the water for irrigation. It is useful to use liquid organics, but in moderation and infrequently, as excess nitrogen leads to foliage growth and delayed flowering. If the bush suffers from chlorosis, experts recommend foliar fertilizing with iron preparations. After the end of flowering, fertilization is stopped, and usually resumed in April. In the spring, after pruning the stems, if transplanting into fresh soil was not carried out, mineral fertilizers can be added directly to the soil.

Most species require a dormant period in a cool room to flower successfully, which usually starts in mid-December and lasts for several months. At this time, the plant does not need abundant watering and top dressing, it can partially or completely shed its leaves. At the end of February – mid-March, when the level of illumination increases, the clerodendrums are pruned, which stimulates the growth of young shoots. After that, the bushes, if necessary, are transplanted, then transferred to a warmer place, they begin to water and feed regularly. Some species do not need a cool wintering; for such flowers of clerodendrum, care in the winter months remains the same as in spring and summer.

With the help of pruning, the klerodendrum at home can be limited in size, in addition, it makes it possible to give the flower crown various decorative forms: ampelous, with hanging branches, climbing along a support, bushy or even in the form of a standard tree. 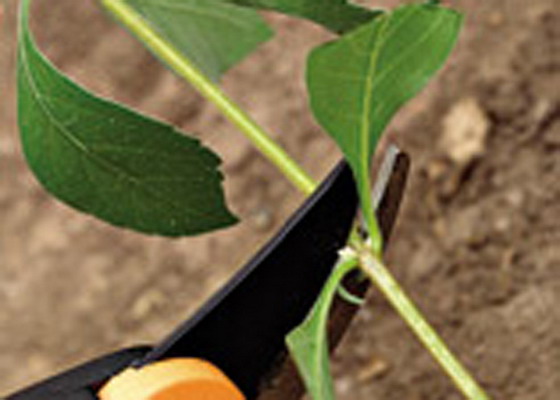 Clerodendrum pruning in the photo

Since inflorescences are formed mostly at the ends of young side shoots, pruning and pinching should be carried out in such a way as to give the bush the opportunity to form full-fledged flower buds. When to prune a clerodendrum depends to a large extent on the particular type of crop being grown.

When to Prune Clerodendrum

Plants with a dormant period (K. Thomson, etc.) are pruned in February, and those that do not require a cool wintering (Ugandan, Bunge, paniculate) – in the fall, immediately after flowering ends. 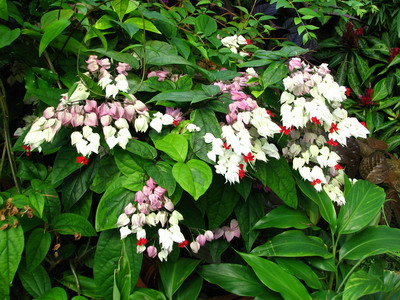 Young klerodendrums are transplanted after a year, adults – after two years. The size of the pot is selected in accordance with the dimensions of the bush, while using very spacious containers is not recommended, the plants bloom poorly in them, and the roots may not cope with a large amount of soil moisture and rot. Experts also advise planting klerodendrums in heavy, wide containers, since the intensive growth of shoots inherent in the culture can lead to the pot tipping over.

A loose nutrient substrate with a slightly acidic reaction is taken as a soil; a mixture of equal parts of leafy, soddy soil, sand and peat can be used. To increase the nutritional value of the soil, biohumus or compost can be added to it. Drainage is required at the bottom of the pot, with a layer of at least 2-4 cm. Plant transplantation is carried out, trying not to damage the fragile roots, which in most species break easily.

The main method of propagation of clerodendrum is cuttings. As planting material, you can use the branches left after pruning. Cuttings harvested in early spring take root best of all; in other periods of the year, their survival rate is much lower. For most species, the rooting process is quite long, it can take several months, and the percentage of established seedlings is small. To accelerate the process of root formation, it is recommended to use various phytohormones: root, heteroauxin, etc.

Rooting is best done in water, followed by planting in the ground. Different species have different ability to reproduce . So, in Ugandan clerodendrum, semi-lignified cuttings quickly form roots, and in bunge, their rooting can take up to six months. This species sometimes forms root shoots, which are successfully used for propagation. In Philippine clerodendrum, young plants can be grown from root segments, using mini-greenhouses for their rooting, or, like the previous species, by planting root shoots. In Wallis’s clerodendrum, the cuttings are rooted in the substrate, having previously been treated with growth stimulants and providing additional lighting.

All species can be propagated by seeds.

The problems that arise when growing a flower are almost always due to care errors.

The most common signs of distress are:

Why does the clerodendrum not bloom?

The lack of flowering most often indicates that the bush is not provided with a dormant period with low temperatures and limited watering. Note that this is not the only reason why the klerodendrum does not bloom. The plant can also increase the vegetative mass to the detriment of flowering due to too abundant top dressing, or, conversely, be weakened due to soil depletion, in the latter case it is recommended to urgently transplant it.

If the flower is not provided with sufficient humidity of air and soil, it can be affected by pests: scale insects, spider mites, mealybugs. For their destruction, a double treatment with an insecticide Aktara is used with a break of ten days.