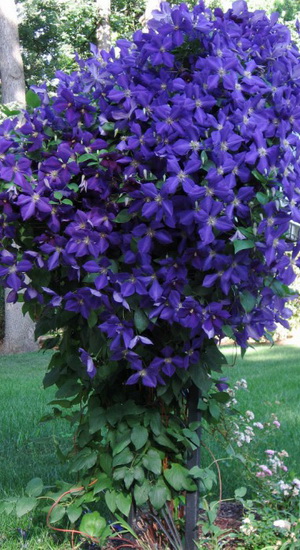 When growing clematis in regions with a temperate and cold climate, it is necessary to properly and timely prepare them for winter.

The root system of the flower is quite frost-resistant, and if the bushes are planted in accordance with the requirements of agricultural technology, that is, with the deepening of the root neck, it is enough to spud them with earth and insulate them with any covering material so that the plants can successfully endure the low winter temperatures of central Russia. Periodic thaws and subsequent frosts are much more dangerous for the crop, since with an excess of moisture on the soil, layers of ice can form, contributing to the rupture of the roots and the destruction of the tillering center. Thus, when sheltering clematis, it is especially important not only to protect them from exposure to low temperatures, but also to completely exclude water from entering the root neck zone and the base of the bush.

Preparation of landings for winter begins in late autumn. Clematis are removed from supports and cut off completely or by 1-2 buds for varieties that bloom on annual growths, one-third of the length for those that bloom on last year’s shoots. The pruning rules for a particular plant depend on the pruning group to which the variety belongs. After the onset of steadily cold weather with an ambient temperature of minus 5-7 ° C, which in central Russia usually corresponds to the month of November, they begin to warm the landings. The projection of the root system is covered with a layer of soil so that a mound is formed about 60-80 cm in diameter and up to 15-20 cm in height. To protect against waterlogging, experts recommend using only dry earth or peat when hilling, up to 3-4 buckets per bush, and to prevent water from entering, cover the resulting mound with plastic wrap. When warming for the winter of clematis of the first and second groups, the lashes remaining after trimming are laid in rings and covered with roofing material, shields from boards, sawdust, spruce branches, or a layer of dry plant residues. After the snow cover is established, the landings must be additionally sprinkled with a layer of snow. Some flower growers do the same with varieties that bloom on annual growths, leaving last year’s shoots under cover. In the spring, the frozen ends of the vine are cut off, from the remaining part with live buds, young side shoots develop later, which successfully bloom throughout the season.

Shelter of clematis for the winter

Note that the insulation of the bushes should be sufficient, but not excessive, too tightly covered clematis in winter can die from lack of ventilation. There is also a danger of their dampening in the spring, when high soil moisture is combined with elevated temperatures due to the bright spring sun, therefore, in order to prevent damage, most of the insulation is removed immediately after the weather sets in with a positive temperature background. Plants are fully opened only after the danger of returning frosts has passed, since low night temperatures, interspersed with bright daytime sun, can also be detrimental to young buds.

With the right choice of variety and careful shelter, clematis successfully winter not only in the middle lane, but also in more northern regions, enduring temperature drops to minus 40-45 ° C, which does not affect their further development and flowering. In addition, among the representatives of the culture there are very decorative and at the same time frost-resistant botanical species that hibernate without hilling, warming, and even without removing shoots from supports.