Claytonia (Claytonia) is a genus of perennial or annual succulent herbs of the purslane family (Portulacaceae), growing in the arctic and alpine regions in the Far East and Eastern Siberia, as well as in the west of the North American continent from Alaska to California. Some species are cultivated in shady gardens and on alpine hills.

There are about 30 species in the genus Claithonia. Most of them form basal rosettes of oval or elongated fleshy leaves growing from a thickened underground rhizome, often taking the form of a tuber. In the spring, short stems emerge from the rosettes, erect or curved, sometimes creeping. Small, usually five-petal flowers with a diameter of 15-20 mm, collected in loose brushes, bloom on their tops. The color of the petals can be white, pink, rarely yellow. Some species are ephemeroids, bloom in early spring and disappear completely by July, others bloom all summer.

Despite the attractive appearance, the plants are not very common in culture due to the specifics of their habitats, the heat and dryness in the summer period oppress the flower, and heat and moisture contribute to the decay of thickened rhizomes. In ornamental floriculture, only Siberian clytonia (C. sibirica), a resident of the northern forests, and large-rhizome alpine clautonia, C. megarhiza, are used. The first is quite widespread in the gardens of Europe and America, it is also becoming popular with us as an unpretentious ground cover plant for shady places, while the second is grown mainly by lovers of mountain flora in North America, used in rock gardens, as a container and pot culture.

On the territory of Russia there are several varieties of a flower, of which the most common are:

Siberian Claytonia (C. sibirica) is a forest perennial with shallow, weak roots, a rosette of fleshy, smooth, lanceolate or oval leaves, and succulent stems 15-20 cm long, on the tops of which small inflorescences, 15 mm in diameter, bloom from May until the end of summer , pale pink flowers. Both in nature and in gardens, the plant does not live long, but it is well renewed by self-sowing. 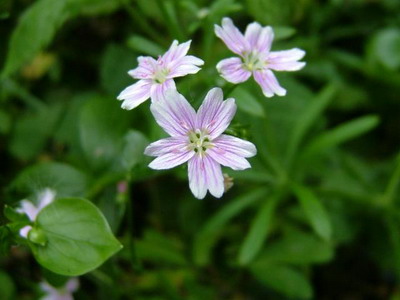 Claytonia tuberous (C. tuberose) is a perennial with thick oval or round rhizomes – tubers, single narrow-lanceolate petiolate basal leaves and a thin curved stem, 15-25 cm tall. White, with a yellowish spot at the base of the petals, flowers up to 15 mm in diameter are collected in 3-10 pieces. in a racemose inflorescence. It lives in the northern woodlands, tundra, at the foot of the rocks. 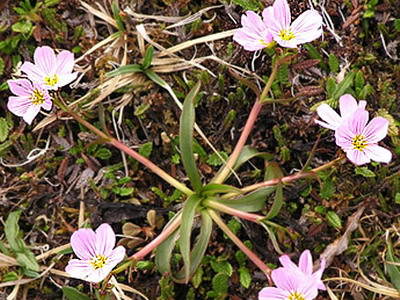 Claytonia arctic (C. arctica) is found in the same place as the previous species. It has a fleshy spindle-shaped root, more numerous basal leaves, lanceolate or oblong, with reddish petioles, and curved sprawling stems 6 to 20 cm high, on which racemose inflorescences of white, yellow, rarely pink flowers up to 20 mm in diameter bloom. 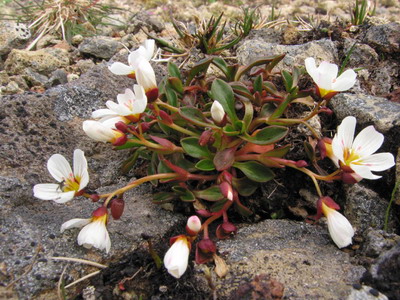