Bluebell (Campanula) is a genus of perennial, biennial and annual herbs, less often semi-shrubs of the Campanulaceae family, common in the regions of the temperate climatic zone of Eurasia and, to a lesser extent, North America. Among the numerous representatives of the genus, there are many flowering species that are widely used in garden and indoor floriculture .

General description of the bell flower

The plants included in the numerous genus of bluebells are very diverse in shape, size and color. Among them there are perennial, biennial and annual species with straight, branched, rarely curly or creeping stems. There are dwarf, 5-7 cm high, medium-sized and tall (up to 150 cm or more) forms.

The short thickened woody root branches into many thin adventitious roots. The leaves of the bells are simple, without stipules, elongated or oblong, with an entire, serrated or serrated edge. The upper ones, located on the stems, are alternate, sessile, the lower ones form a basal rosette. 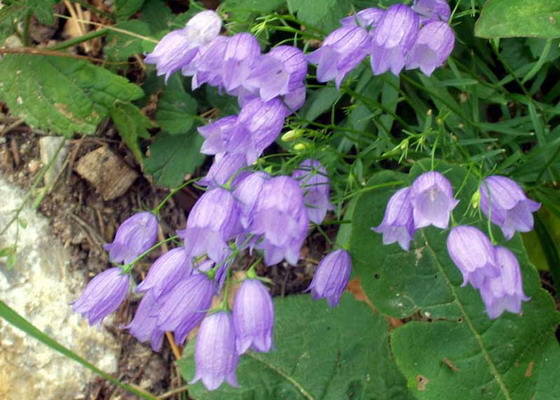 Bell flower in the photo

Bell flowers (see photo) are usually collected in paniculate or racemose inflorescences, rarely form as single ones, located at the ends of the stems on peduncles up to 5 cm long, most often painted in blue, purple, purple or pink tones, can be white, very rarely yellow, orange or reddish. Plants bloom profusely in the spring and summer, usually 14-45 days, there are longer blooming forms, up to 90 days. A small group of species blooms in the second half of summer.

A characteristic common feature of all representatives of the genus can be considered the shape of a bell flower, which has a large, up to 5 cm in diameter and 7 cm long, funnel-shaped, bell-shaped or tubular-bell-shaped corolla with five petals fused from below, pointed at the top and curved outwards. 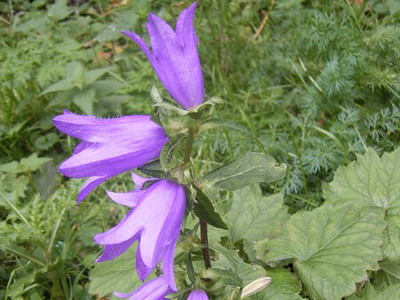 Less common are varieties with a flatter or wheel-shaped calyx. All bluebell flowers are rich in pollen and nectar, making them good honey plants, and also have a pleasant honey aroma. 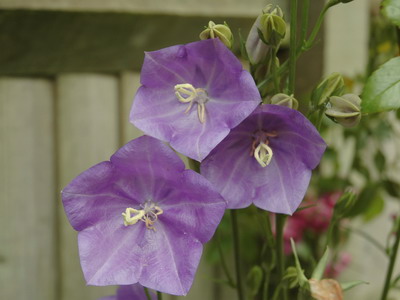 Most species cultivated in the middle lane, with the exception of some representatives of the Mediterranean flora, successfully bear fruit.

The fruits of the bell are elongated boxes that open with three to six slit-like holes with numerous small white or brown seeds, which remain viable for a long time, up to five years. 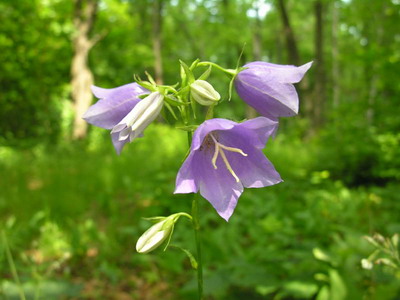 An interesting biological feature of culture is its ability to change its appearance depending on external conditions. So, with a lack of lighting, the leaves become wider and darker, and the humidity of the surrounding air largely determines what color the bells will bloom in the flower bed. If there is a lot of moisture in the air, then their corollas will be much lighter than when grown in dry conditions.

The scientific name of the flower “campanula” is due to the characteristic shape of its corolla, and comes from the Latin word “campana”, which translates as a bell. The name of the culture “bell” common in Russian botanical literature has the same roots. Among the people, the flower is affectionately called bells, chenilles, birdies, doves, etc., it is loved and appreciated for its beauty, unpretentiousness, as well as medicinal properties, which will be discussed below.

Bluebells in the garden and in natural conditions

Representatives of the genus are very numerous, grow throughout Western Europe, in Siberia, the Caucasus, in the countries of the Near East and Central Asia, less often in North America. They live in forests, in fields and meadows of the middle zone, in deserts and semi-deserts, in rocky areas, in the alpine and subalpine belt of mountains, one of the varieties can be found even in the Arctic. This diversity of habitats determines the biological characteristics of the species, which must be considered when growing bluebells in the garden. So, for example, most of the cultivated forms need bright lighting, but among them there are also shade-loving plants, the natural range of which is the forest belt, they not only grow well in partial shade, but even tolerate complete shading. The requirements of flowers for soil moisture are not the same. Those that are found in nature along the banks of rivers and streams are moisture-loving, the inhabitants of forests and meadows of the middle zone also need sufficient watering, but the inhabitants of the rocks and dry regions of the Mediterranean, Asia Minor are drought-resistant and do not need additional moisture. Among the cultivated perennial forms, there are plants that vegetate only in the spring-summer period, that is, with leaves that grow in early spring and die off with the onset of cold weather, and those that are able to grow all year round, in the middle zone – from snow to snow. The latter species, when given the appropriate conditions, can be successfully grown in room culture.

Despite the wide distribution of bluebells, some of them are considered rare. So, in Europe, 12 species of bluebells, six of which are endemic to Italy, are on the verge of extinction. The reason for this situation is both the commercial collection of flowering plants and the destruction of their natural habitat. Fortunately, many of these plants have long been cultivated and grown as garden flowers.

History and cultural use of bluebell flowers

In decorative floriculture, bluebell flowers have been used since the middle of the 16th century. At first, large-flowered wild species were grown in the gardens, among them the most attractive forms were gradually selected, over time, numerous cultivars of various sizes and colors were created. In the famous work of Carl Linnaeus “Plant Species”, published in 1753, descriptions of more than forty different types of bells are given, and in the work of Academician P. Pallas “Flora of Russia”, published in St. Petersburg in 1784, there are already about a hundred detailed descriptions of flowers bluebells growing on the territory of Russia, both in the wild and in flower beds.

Currently, the plant is widely grown as an ornamental, not only in garden, but also in room culture. A large flower characteristic of most bluebells, abundant and long flowering, ease of care and reproduction, as well as a variety of colors and sizes create wide possibilities for its use in landscape design. You can pick up miniature varieties for alpine slides, medium sizes for borders or flower beds, tall ones for the background of a flower garden. Among garden bells, annual and biennial species are especially common. Somewhat less frequently, perennial forms are grown, which for the most part can still be attributed to minors, since their degeneration begins already from the second, third or fourth years. There are also species that successfully vegetate for 6-8 years, there are even real centenarians, for example, milky-flowering and Vidal bells, which can live for more than 20 years. Below are a few examples of the use of bluebells (see photo below) in the garden and rockeries, in pot and ampelous culture.

In addition to being used as a garden and indoor flower, the plant is also valued for its healing qualities. It has long been believed that it has anti-inflammatory, antimicrobial, wound healing and analgesic properties. In folk medicine, a decoction of the herb is drunk at fever and cough, used for skin diseases, constipation, uterine bleeding, headaches and stomach cramps, as a sedative and analgesic. Especially often it is used to treat various diseases of the throat and oral cavity, which is even reflected in the popular names of some species. So, the nettle bell, another name for the flower – a large bell, often used to treat the throat, has local names “goose neck”, “primary grass”, “throat grass”.

We also note that many varieties are edible, salads are prepared from their leaves and stems, boiled in soups, borscht and cabbage soup. The high content of vitamin C in the greens makes it useful to eat it fresh, especially in the first half of summer, before flowering, when the texture of the leaves is most tender. The fleshy roots of the culture are also used in cooking, resembling parsnips in taste.