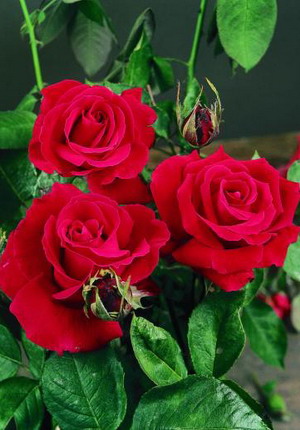 The ancestor of the hybrid tea rose was the variety “La France” bred by the French breeder Guyot in 1867 as a result of crossing a tea rose with a remontant. Over the years, 10 thousand varieties were bred, which are characterized by different heights of bushes, a variety of shapes and shades of flowers. A distinctive feature of the hybrid tea rose is the unique aroma of freshly cut tea and almost continuous flowering from early summer to late autumn.

With proper care for young and adult bushes, hybrid tea roses can produce up to 7 flowers on a peduncle, each of them has from 20 to 130 petals, depending on the variety.

Hybrid tea roses cannot be proud of endurance to weather conditions. Like any representative of the queens of the garden, this group is very whimsical and capricious. Therefore, for successful growth, flower growers must pay enough attention to it and adhere to strict recommendations that have been formed over many years through observation, experimental research and painstaking work. The reward for patience and quality care will be lushly blooming flower beds, striking in their beauty and brightness.

In order to get beautiful hybrid tea roses, planting must be carried out according to agrotechnical rules. The hybrid tea rose is propagated by grafting, and some varieties by cuttings. Landing is carried out in early May in sunny, wind-protected areas with slightly acidic, loose soil. Before planting, seedlings with bare roots are dipped in water for several hours so that they are saturated with moisture. It is better if the plant is completely immersed in water, or at least its root part, including the grafting site (thickening between the root and the stem). 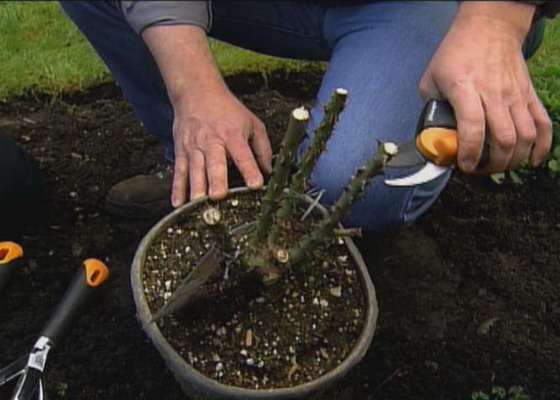 The photo shows one of the methods for planting a hybrid tea rose.

For planting bushes, planting pits are made with a size of 30-50 cm. No more than 5-8 bushes are planted at a distance of 30-50 cm, previously moistened with a manure mixture (2 parts of clay, 1 part of water and 1 part of manure). After planting and compacting the soil around the plant, an earthen roller is formed so that during the next abundant watering, water is kept in the root area. Planting roses is completed with hilling to protect the lower buds from cold, heat and wind. Hilling height about 15 cm.

Hybrid tea roses are allowed to grow in open and closed ground conditions, depending on the climatic conditions of the region. Roses of this group bloom almost all summer, forming flowers on annual shoots. Therefore, in the spring they need moderate or relatively strong pruning, depending on the varietal characteristics. The first year the bush is cut into 2-3 buds, in subsequent years – by 5-7 buds. Summer pruning stimulates shoot growth, thereby laying the foundation for re-blooming. Do not cut more than two flowers from one bush at the same time, so as not to weaken the plant. Pruning for the winter is done at the end of October. Unripened shoots, flowers, leaves, buds are cut off, which are subsequently necessarily burned.

After completing all the above procedures, the roses are covered with spruce branches and the base of the bushes is covered with earth or peat to a height of 20-25 cm. In severe frosts, a frame is constructed, on top of which insulation material is placed, and so that it does not get wet, it is covered with a synthetic film on top, the edges of which are sprinkled earth.

If you decide to grow hybrid tea roses, you need to ensure constant care for them. For stable growth and incessant flowering of the queen of flowers throughout the season, mineral supplements are needed, which should contain phosphorus, potassium and magnesium. The first and second top dressing during the growth period is done with a solution of nitrogen fertilizer (15-20 g of saltpeter, 10 g of urea per 10 liters of water). You can alternate organic and mineral top dressing. During the budding period, roses are fed with complete mineral fertilizer (20-25 g of saltpeter, 40-50 g and 15 g of potassium per 1 sq. M or 10 liters of water).

After the first flowering, the roses should be fed again with a complete mineral fertilizer, reducing the dose of nitrogen fertilizers to 10-15 g and slightly increasing the rate of potash fertilizers.

Watering hybrid tea roses carries several specific points that cannot be neglected. The lack of moisture in the earthy coma around the bushes will inevitably lead to wilting and partial shedding of foliage, inhibition of shoot growth.

It has been noticed that excessive drying is fraught with a change in the qualities of the variety, namely: the flowers become small, the color of the petals turns pale, and the aroma may lose its pronounced notes. But frequent watering is undesirable. For this plant, the most acceptable option is abundant water procedures during the period of growth, budding and flowering no more than 1 time per week in the summer heat, and in spring and autumn, when the sun is not so active, 1 time in 10-14 days is enough. After watering, it is recommended to mulch the soil around the bush with humus, which will protect it from drying out and overheating, accelerate growth and ensure abundant flowering.

Hybrid tea roses can be proud of their chic collection of varieties. To date, the exact figure is not known, since every day the list is replenished with more and more new beauties. Modern hybrid tea rose varieties are on the market for every taste. The most famous and popular of them are described below:

Alexander (Alexander) – a variety with erect stems reaching a height of 1-1.5 m. It is characterized by a slightly fragrant smell. The diameter of the flowers is 12 cm. It belongs to the type of semi-double. The color is bright red. Perfect for decorating hedges, used for cutting.

Peer Gynt is one of the earliest varieties, but is prone to powdery mildew. The bush is compact, 90 cm high, with lush foliage and thin sharp thorns. Large single flowers with a delicate smell are painted in golden yellow, and by the end of flowering they acquire an unusual pink bloom along the edges of the petals. Valued for abundant and long flowering. Designated as a standard culture and can be used in bouquet compositions. 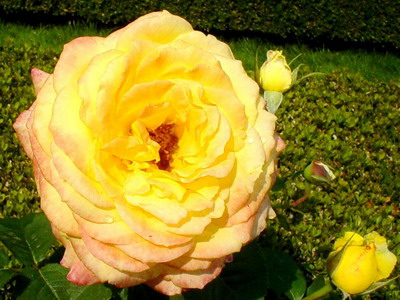 Prima Ballerina is a very popular flower bed rose. It gained its popularity with spectacular flowers with a strong pleasant aroma. Erect bush 1 m high. Inflorescences are large, semi-double, cone-shaped classical shape, unusual cherry-pink color scheme. This variety of rose is resistant to diseases, in particular it is affected by powdery mildew. In reference books it is described as a flower bed rose. 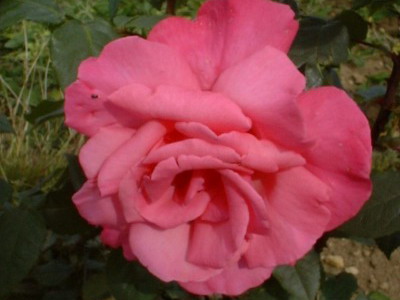 Dame de Coeur is one of the cold-resistant varieties and does not respond to diseases. Plant height 90 cm Flowers slightly fragrant, large (11-12 cm in diameter), double, elongated, cup-shaped, raspberry-red color. It is used for cutting, as a stem culture, as well as in the cultivation of groups.

La France (La France) – is considered the very first in the group of hybrid tea roses. The unusual color of the petals is the surface color is silvery pink, and on the underside is hot pink. The size of the flowers is large (10 cm), densely double (60 petals). Pronounced odor. It blooms both single flowers and inflorescences (3-4 flowers). Winter-hardy variety, but can be affected by fungal diseases. Looks great in group plantings.

Lucky Piece (Lucky Piece) – the variety is in demand among amateur gardeners. Its perfect form flowers that have a double-sided color (the upper part is apricot-pink and the lower part is orange-red) do not leave indifferent and make them admire them. The flower bowl reaches 10-12 cm in diameter, densely double (45-50 petals), the bush itself grows up to 80 cm in height, but is compact with dense foliage.

The varieties described, of course, do not constitute the main order of hybrid tea roses, but are widely known in the circles of amateur gardeners and professional breeders. We repeat and say that active work on the development of new varieties has not lost its relevance and is still being carried out. Exceptionally all species can become a pearl in landscaping garden plots and decorate your home if roses were grown for cutting.