Types and varieties of Codiaum

According to the latest scientific data, there are 17 types of codiaum in total, but only one of them is used in culture, codiaum variegatum, or motley (C. variegatum), and its varieties. In nature, it grows in the tropics of Southeast Asia, where it is an evergreen tree, reaching a height of 4 m in favorable conditions, with dense leathery leaves up to 30 cm long, the shape and color of which depends on the variety to which the particular plant belongs. 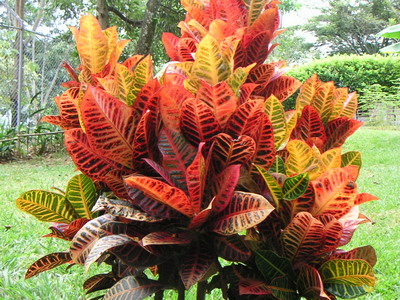 In floricultural literature, another name for the motley codiaum, croton, is often found. Culture owes them to Carl Linnaeus, who in his taxonomy of the plant and animal world in 1762 attributed the flower to a related, but much more numerous and less attractive genus of crotons, which modern science has recognized as erroneous. Currently, the scientific name codiaum is considered correct, as the plant was named by the Dutch naturalist Rumphis, who first described it back in 1690.

A distinctive feature of the species is its ability to change the shape and color of the leaves, depending on the external conditions of existence. This unique quality not only contributed to the emergence of a large number of natural varieties, but also allowed breeders to create a huge number of ornamental varieties and hybrids, sometimes so different from each other in color and appearance that it is difficult for a non-specialist to guess that they belong to the same species.

The most famous, most widely used natural variety in culture is the decorated codiaum (C. variegatum var. pictum) . It grows in Pakistan, China, under natural conditions it has the appearance of a tree up to 3 m high, with a trunk bare from below and spreading short-leaved leaves, elongated-lanceolate, heart-shaped-ovate at the base, painted green and brown. 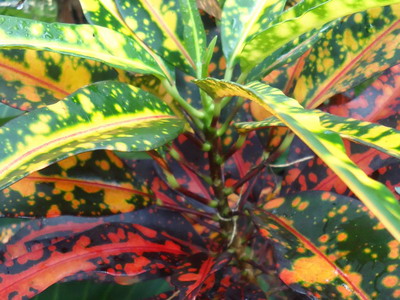 There are several forms that differ in leaf structure, of which the most common are:

Adnexal (appediculatum) , with leaf plates, consisting of two parts, interconnected by a thin bridge. The upper part seems to hang from the bottom, often resembling a small bell. There are both green and colorful options. 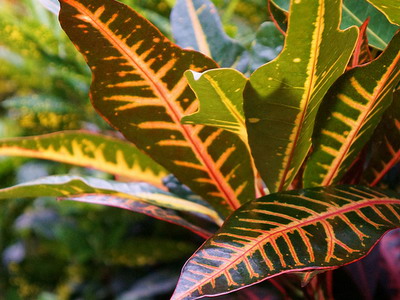 Lobated (lobatum) , which is characterized by three-lobed, shallowly dissected leaves, their central lobe is longer than the lateral and more pointed. The size of the leaf plates is up to 22 cm long and up to 10 cm wide, the color depends on the variety and can be either plain or variegated, decorated with stripes and spots. 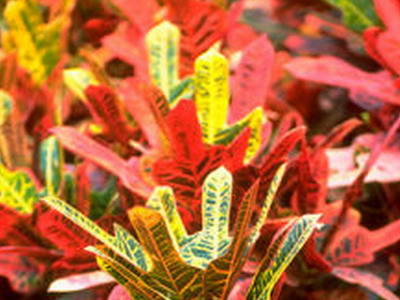 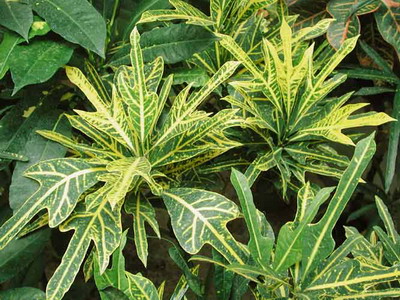 The decorated variety (C. variegatum var. Pictum) served as the basis for the creation of numerous varieties and hybrids, among which are such well-known ones as codiaums variegatum Petra, Excelent, Mrs. Aiston, Gold Sun, etc. Some of them are described below.

Codiaum Petra is a plant with straight branching trunks and large leathery cuttings leaves arranged alternately on the stem. Their shape can be oval, pointed or lobed, the color attracts with a contrasting combination of a dark green background and bright yellow edging, the same color of veins scattered over the surface of the specks. 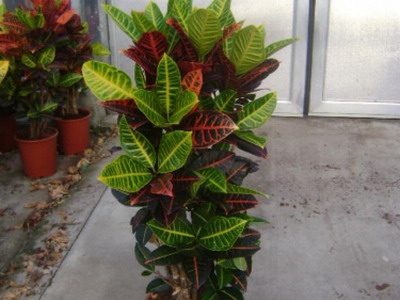 Codiaum Excelent is notable for its unusual shape of lobed leaves, reminiscent of oak, and their bright color, green and yellow in the upper part of the stem and red-burgundy-yellow below.

Kodiaum Mammi has narrow leaves, smaller than the previous varieties, slightly wavy, curving along the central vein, located along an upright branching stem. Their coloring is very picturesque, on one plant it can be green, red interspersed with pink, yellow with red veins. 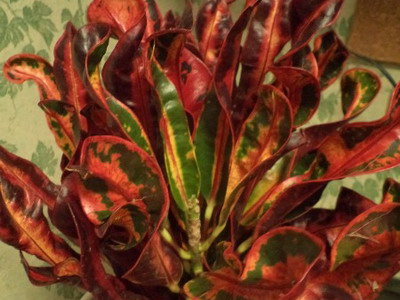 Codiaum Sunny Star is colored mainly yellow, while the tops and bottoms of the leaves are green. Their shape is oval-lanceolate, pointed. Young leaves are usually greenish with yellow spots and the main vein of the same color. 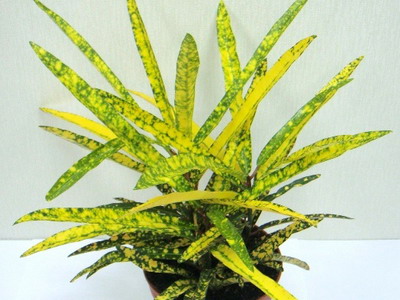 Codiaum Mrs. Ayston with wide, short, flat, rounded leaves at the ends, decorated with a cream pattern at a young age, covered with red, pink, yellow spots with age. 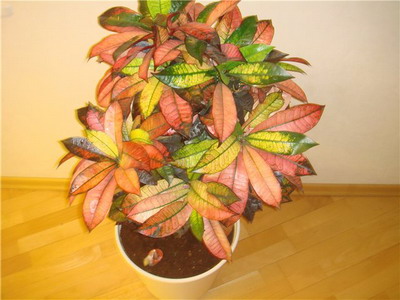 There are varieties of this variety: 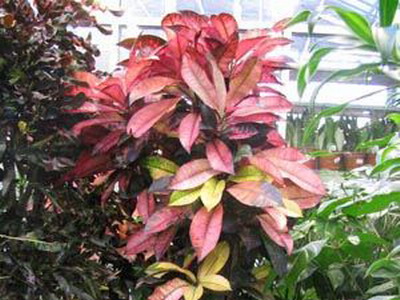 And Aiston is yellow, correspondingly with a yellow tinge to the foliage. 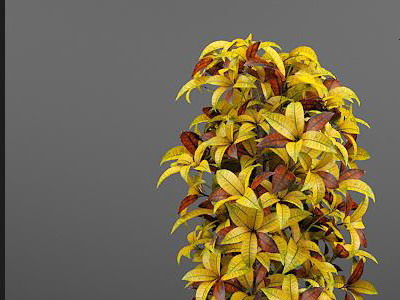 Codiaum Disraeli, a variety with a typically lobed leaf shape, green above with yellow veins and specks, brown-brick below. 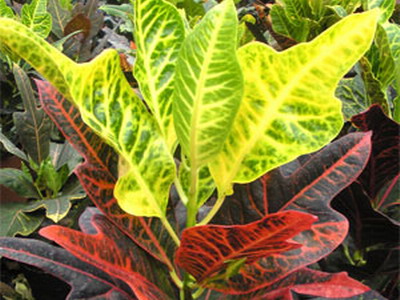 Codiaum Black Prince belongs to the flat-leaved form, its hard wide oval leaves are very decorative, have an exotic black-green color and many red, yellow, orange spots on the surface. 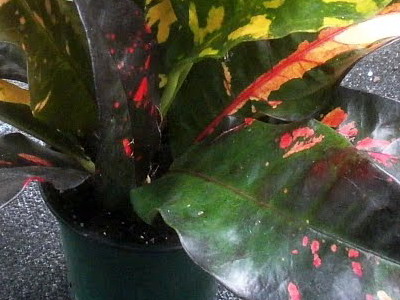 Sometimes in flower shops there is a plant called codiaum variegatum mix. In this case, we are talking about a flower imported as part of a batch of plants of different varieties of this variety. It is impossible to give an exact description of the codiaum mix, in order to determine which variety the acquired flower belongs to, specialist advice is usually required. 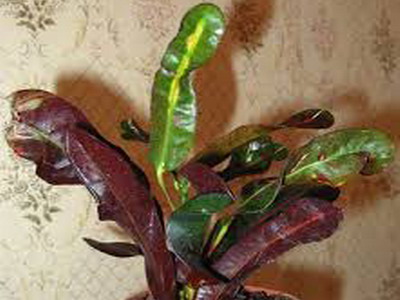 This exotic tropical plant has other varieties, perhaps somewhat less common in culture, but no less decorative.

Moluccan (C. variegatum var. molluccanum) , with pointed petiolate leaves, which can be either broadly ovate, 12-20 cm long and 2.5-4.5 cm wide, or narrow, spatulate-lanceolate, up to 30 cm long and about 4 cm 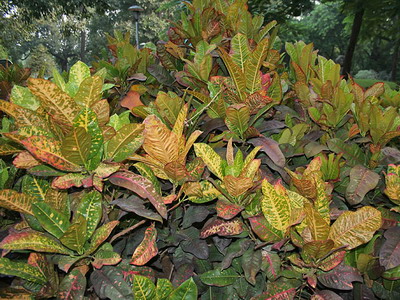 Separately, we note the minus form, common on the islands of Java and Fiji, which is distinguished by its miniature size. The width of its leaves is only 1-2 cm, and the length does not exceed 12 cm. 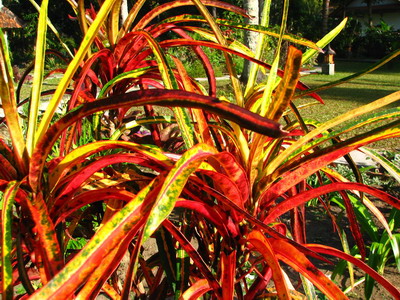 Genuine (C. variegatum var. genuinum) , which is characterized by whole flat broadly lanceolate leaves, tapering at the base and at the ends, they are covered with a silvery or golden pattern on top, sometimes have a slightly reddish tint. There are several forms that differ from each other in the length and width of the sheet plates. So, in the lanceolate form, they are slightly blunt at the ends and have a length 4 times greater than the width; in narrow-leaved – the tops are pointed, the length exceeds the width by 6-9 times, and the surface is covered with numerous golden spots and strokes; the medium-leaved form differs from the previous one in wider (up to 3.5 cm) leaves, the length of which reaches 17 cm. There are also small-leaved and ribbon forms, the first leaves are small, wavy or curly, covered with small red, yellow, black dots, the second – short-petiolate, narrow, about 1 cm, and long, up to 30 cm, uniformly green or covered with yellow spots. 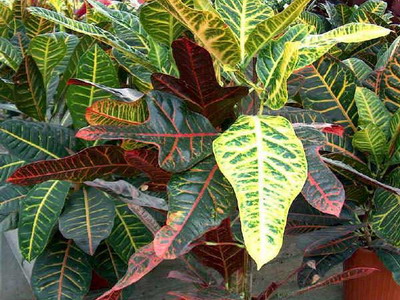 The oval-leaved (C. variegatum var. ovalifolium) variety has flat, oblong-oval leaf blades rounded at the ends, along the veins and in the upper part of which there are distinct bright yellow areas. 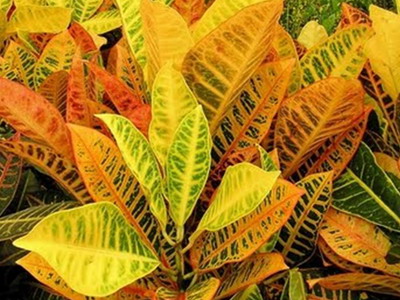 Open-leaved (C. variegatum var. recurvifolium) , the leaves of which are broadly oval, with edges turned outward. 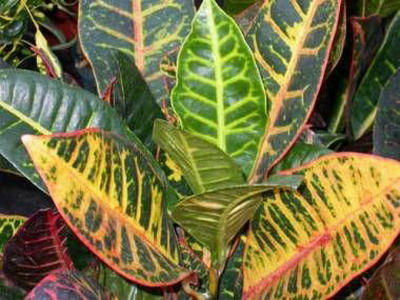 Tortoise (C. variegatum var. tortile) , differs in the original shape of the leaf, heart-shaped at the base, linearly elongated at the top with a sharp tip, and variegated in color, with a golden stripe along the central vein and numerous irregularly shaped spots of the same shade. 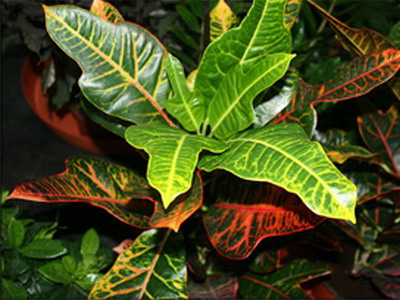 A very decorative variety, or curly form (C. variegatum f. crispum) , in which the leaf blades, petiolate, long and narrow, are twisted into a spiral. Their coloring can be with a mesh pattern, golden stripes or spots of the same color. 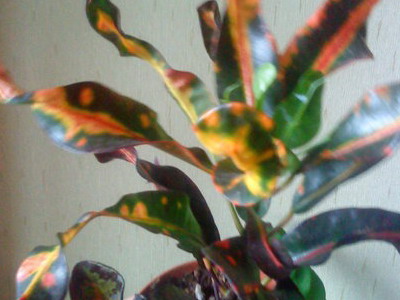 A prominent representative of the variety is the Spirale cultivar. 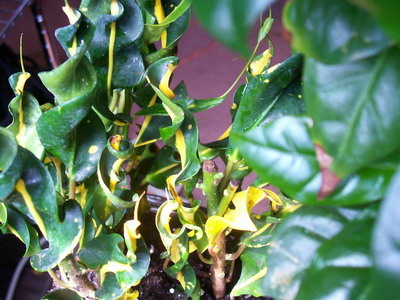 It should be noted that many natural varieties and an even greater number of cultural hybrids and varieties of codiaum in many cases make it difficult to determine the exact name of the cultivar, which is also facilitated by the property of the plant to change color with age. For this reason, the flower most often appears on sale simply under the name C. variegatum or under the outdated name Croton variegated. 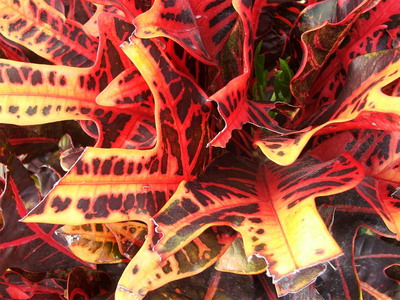 The genus Schefflera (Schefflera) belongs to the Araliaceae family. In nature,...
Read more

Vallota flower is a deciduous bulbous plant that grows in the...
Read more