Description: This is one of the most popular flowers in the world. Strong bulbs produce flowers of extraordinary beauty in spring and early summer. They have been cultivated for thousands of years. These magnificent flowers reached their peak of popularity in the first half of the seventeenth century in Holland, when the speculative frenzy known as tulip mania began. Despite not being considered a form of currency today, they are still an irresistible plant for many gardeners. They are of great value as cut flowers and often bloom indoors during the winter. Tulips bloom luxuriantly in countries with a cool climate. For best results when grown in southern countries, after purchasing in autumn, they should be kept at 4-5°C for a few weeks before planting.

These plants are easy to care for. Among the bulbous plants, the tulip is probably the easiest to grow.

Fertilizers: Top dressing should be applied regularly to the soil. It is better to use well-rotted compost than manure. The best effect can be achieved by using bone meal as a fertilizer. The calculation should be as follows: 50-60 gr. flour per 1 sq. m. After that, the soil must be cultivated with a garden pitchfork. 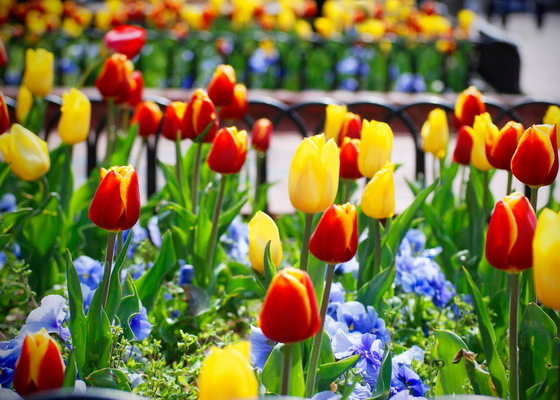 Popular varieties of tulips in the photo

Varieties of tulips that have multi-colored petals are called “damaged” ( “broken” tulips ). The flowers of such bulbs have stripes of different colors and / or framing at the edges of the petals. They can be very beautiful. Tulips that are pink in color are called roses . Some of the species are purplish or violet in color on a white background and are called Bybloemens . There are also varieties that have a brown, red or purple color on a yellow background. Such species are called bizarre ( Bizarres ). “Broken” tulips are so called because of the disease, which can be contagious. Such varieties can be grown artificially by transplanting a piece of tissue from an infected bulb into a healthy one or by plant aphids. In the wild, the disease is partially spread by aphids that feed on bulbs. The presence of the disease can be determined by the state of the foliage: it is usually infected. Pale green stripes and spots appear on it. The plant itself is also smaller and its flowering is not as spectacular as compared to healthy specimens. It is recommended to keep infected plants separate from healthy ones to avoid the spread of the disease.

All tulips are divided into two groups: early flowering, which usually begins flowering in April, and a group that begins to bloom in May. According to their characteristic features, these two groups are divided into sixteen subgroups. In general, tulips are considered perennials, but very often gardeners use them as annuals. They were first discovered in Turkey, and their name comes from the Turkish word “tulbend” , which means turban in translation. It was believed that outwardly they look like a turban. Many believe that the homeland of these bulbous plants is Holland, but this is an erroneous opinion. They were brought to the Netherlands from Persia. Depending on the species, they grow 10 cm wide and up to 70 cm high. In most species, the flower appears on a single stem, but there are special varieties that form several flowers on the stem. According to some reports, in the ranking of the most popular flowers, the tulip takes third place, behind the rose and chrysanthemum.

Homeland: Byzantium, and the birthplace of selective tulips is Turkey. This plant plays a significant role in Turkish culture and art. The reign of Sultan Ahmed III, falling between 1718 and 1730, has been called the “Tulip Era”, known as the era of peace and happiness. Very often this flower is depicted on various Turkish textile products.

Flowering: very variable. Many species have been bred, the flowers of which differ markedly, for example, the hybrid tulip. 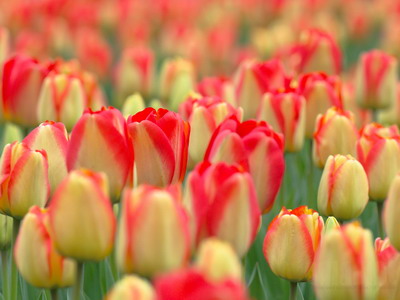 Reproduction: when small bulbs form from the mother bulb, they can be planted in the fall. Also, tulips can be reproduced from seeds, which should be planted in sandy soil. However, new plants often do not bloom for several years. When the seedlings get stronger, it can be transplanted into the garden. The most important thing for tulips is suitable climatic conditions and soil.

Planting: Plant bulbs in October or November for best results. Planting depth should be three times longer than the length of the bulb itself. Tulips, the cultivation of which perfectly decorates the garden, can be planted with other flowering plants. But then the bulbs need to be planted after other flowers have been planted, otherwise you can damage the bulbs with a shovel. If too many bulbs are planted in a small area, this can become a problem. In this case, you should dig up the plants before the foliage is about to die. Then you need to separate the small bulbs from the mother and transplant them to another place.

Pests and Diseases: One of the hardiest plants is tulips. They are easy to care for and disease usually does not affect them. However, they can be hit by “tulip fire”. The stems and leaves of plants take on a diseased appearance and stop growing. Then brown spots appear on them. If your flowers are affected by such a disease, then the bulbs must be destroyed.

Optional: After flowering, wilted flowers can be pruned, but the foliage should always die off by itself.

Application: mainly used for cutting. Tulips usually stand idle in a vase for a week. To increase the downtime of flowers, add some sugar to the water. 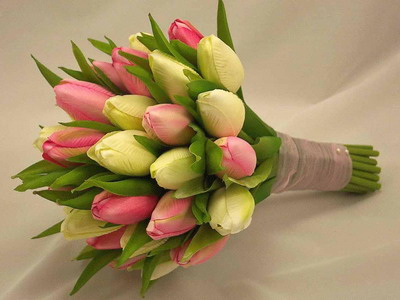 This species produces single or red, yellow, pink or multi-colored cup-shaped flowers on strong erect stems, on which several leaves are located. Shrenka tulip grows luxuriantly in those regions where summers are dry and winters are cold. Great for planting in a rock garden or containers. 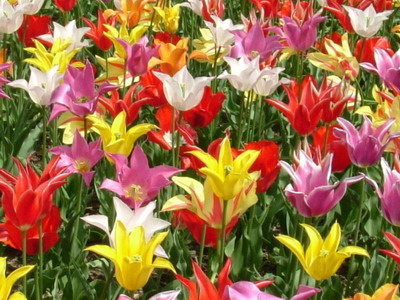 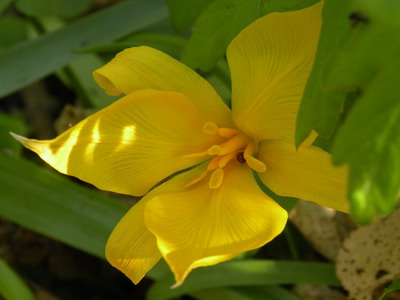 Was discovered in 1953. Tulip Greiga is a plant of extraordinary beauty, on which magnificent flowers are formed, bright red inside and carmine outside. They are black at the base and appear on 25-30 cm stems. 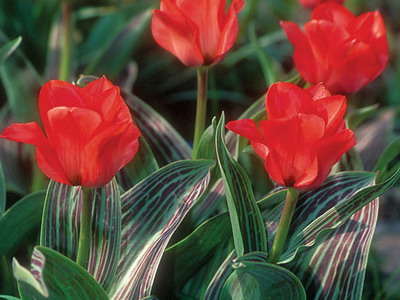