The genus Nolina (Nolina) or Bokarneya unites about 30 species of succulent plants of the Agave family. In nature, it can be found in the southern states of the United States and the northern provinces of Mexico.

In total, there are more than a dozen types of nolina, you can find their photos and descriptions on this page below.

Recurved Nolina (Nolina recurvata) has a swollen, onion-like base of the stem that retains water, so a temporary lack of moisture will not cause any harm to the plant. Because of this base of the stem, the plant got the name “elephant’s foot”, and because of the crown, which is formed by long belt-like leaves, another – “horse’s tail”. 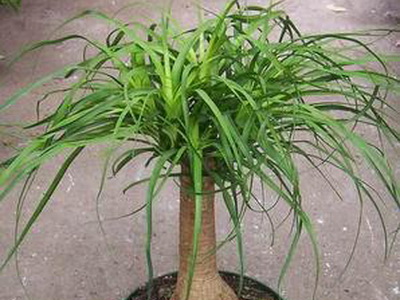 The stem of the nolina of this species is tree-like, erect, slightly branched. The leaf blade looks like a twisted hanging ribbon 1 m long and 1-2 cm wide. Dense rosettes of dark green leathery leaves form at the top of the stem. In summer, in adult plants, a paniculate inflorescence grows from a leaf rosette with many cream-colored flowers with a pink tint. At home, flowers do not form on noline. 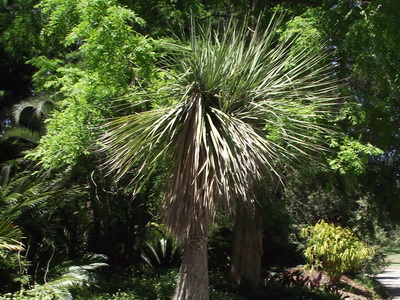 Long-leaved Nolina (Nolina longifolia) is a powerful plant with thick cork-like bark, which in old specimens is covered with deep cracks. In nature, it usually reaches a height of several meters. Old dried leaves form a fluffy “skirt” covering the lower part of the trunk. 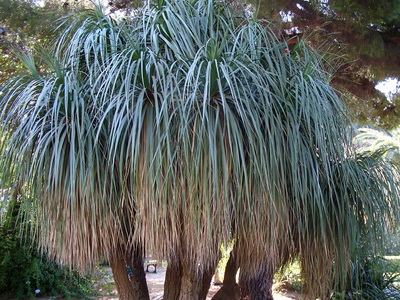 Nolina indoor plant is given a bright sunny place. Direct sunlight will not harm the plant, as in nature it grows in arid places. In summer, Nolina is taken out into the fresh air and kept at an optimal temperature of 25-30 ° C. In winter, it is transferred to a bright, cool room and kept at a temperature of at least 10 ° C.

When caring for nolina at home in summer, the plant is watered abundantly, as the soil dries up, the plant cannot tolerate waterlogging. In winter, watering is limited to a minimum or not watered at all. With an excess of moisture and a lack of light, the plant stretches, the trunk becomes thin. Spray or wipe the leaves with a damp sponge if the air in the room is too dry. Do this carefully so that the trunk is not very wet, otherwise rotting may begin.

Every year in the spring they are transferred to a larger pot. The ratio of the length of the trunk to its thickness changes under the influence of external conditions. Feed in the summer once a month with mineral fertilizers.

Young plants are transplanted every two to three years, adults – as needed. The roots do not grow in depth, but in width, so the pots are chosen shallow and wide. Transplanted carefully, make sure that the roots are not damaged, as they are quite fragile. Good drainage is required with a layer of 1.5-2 cm. The soil mixture is prepared from leafy soil, peat, sand (1: 1: 2). After transplanting, the plant is not watered for two to three days.

Propagated by seeds or side shoots. For sowing seeds, a mixture of any fertile soil and sand, taken in equal amounts, is suitable. Seeds are sown to a depth of 1 cm, moistened, covered with glass and placed in a well-lit place. The optimum temperature for seed germination during nolina propagation is 20-25°C.

Sleeping buds sometimes wake up under the bark of the plant and start growing, young side shoots appear. They do not have lateral roots, therefore, after separation from the mother plant, it is recommended to place the shoot for a day in a solution of a root formation stimulator. Then the shoot is planted obliquely in the soil. The planted process is covered with a transparent cap and placed in a warm place. After the young plant begins to grow roots and leaves, the shelter is removed.

Nolin flower pests are spider mites, scale insects. The indoor plant is not affected by diseases.