Kobeya (Cobaea) is a genus of perennial shrub or semi-shrub vines from the cyanotic family (Polemoniaceae), naturally growing in the mountain rainforests of tropical and subtropical regions of America. Beautiful flowering species are used in gardens for vertical gardening.

Description of the kobe flower with a photo

Kobei are climbing or clinging shrubs or subshrubs, the numerous stems of which reach a height of 6 meters or more. The next complex-pinnate leaves consist of three separate parts, branched tendrils are formed at the ends of the shoots, which are modified terminal leaves. With the help of tendrils, the plant independently clings to any support, rises to a considerable height, and is able to decorate large areas of vertical surfaces with greenery in a short time. 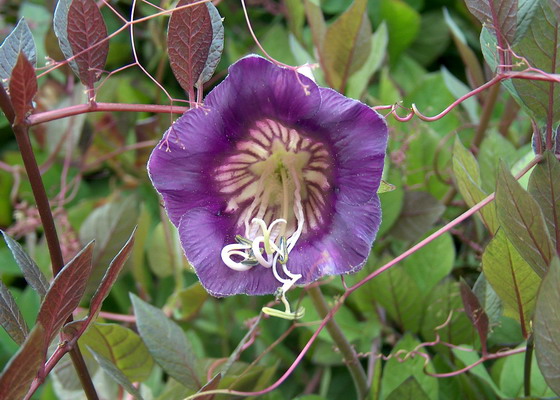 Kobe flower in the photo

Kobei flowers are large, up to 8 cm in diameter, single or grouped in 2-3 pieces, bloom on long pedicels in the axils of the leaves, have a bell-shaped shape with long protruding stamens and pistil. The color of the kobei flower is initially greenish-yellow, then gradually changes to white or purple, depending on the variety. The fruit is a leathery box that opens along the side seams with large, flat-round seeds, 1 g contains up to 15 pcs. Below is a photo of a kobe with flowers in full bloom.

The culture is characterized by intensive growth, and therefore a high nutrient intake, therefore it has a powerful root system. Its many thin, fibrous roots are naturally adapted to grow in nutrient-rich rainforest flooring.

Of the nine species included in the genus kobei, only one is used in decorative floriculture, climbing kobeya (C. scandens) , also called creeping kobeya, “Mexican ivy” or “monastery bells”. This large fast-growing liana, whose natural habitat is the mountain forests of Mexico, grows up to 4-6 m, its numerous shoots, covered with pinnate, slightly wrinkled, openwork leaves, do not require support, since they independently cling to any surface with branched tendrils. 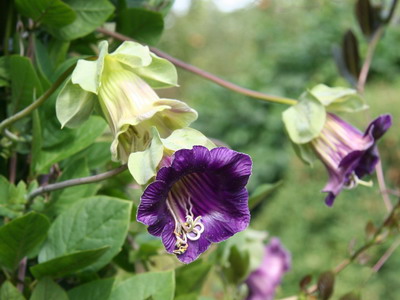 The plant has been grown in gardens since 1787. Like any inhabitant of the tropics, it is very thermophilic, and does not winter in Russia, therefore it is grown here in an annual crop. Due to its intensive growth, when creating favorable conditions in one season, the culture manages not only to increase the vegetative mass, but also to bloom. When growing kobei through seedlings, flowering begins in July – August and continues until the first frost, sometimes fruits are formed, but the seeds in our gardens usually do not ripen. In a subtropical climate, the liana is cultivated as a perennial, in which case its shoots become woody, and flowering begins as early as April.

As you can see in the photo, the climbing kobe is very decorative. It grows rapidly, braiding any support or vertical surface with shoots with openwork foliage, and by the end of summer it is covered with large bell-shaped flowers.

At first, the buds are greenish in color, as they bloom, they become light with a slight smell of musk, and then acquire a dark purple or lilac color and a honey aroma. The natural color of kobei flowers is purple. 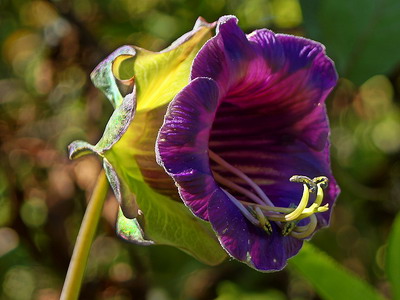 However, there is a garden form of white kobe called Alba (C. scandens Alba). 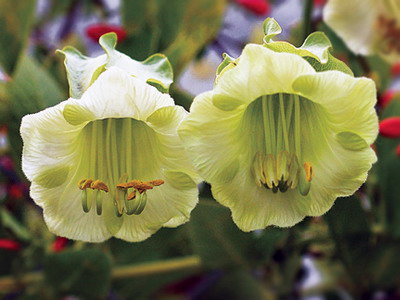 The culture is used in landscape design for decorative design of pergolas, arbors, facades and fences, and is grown on balconies and loggias. It feels great in winter gardens, where in a short time it can create a colorful vertical wall, decorated not only with green foliage, but also with bright flowers.

How to grow a kobe in the garden

The tropical origin and intensive nature of development determine the peculiarities of growing kobei, planting and caring for it in central Russia. This heat-loving plant does not tolerate negative temperatures, and we use it as an annual, and it is planted exclusively through seedlings. For planting, kobei choose a warm, wind-protected place near a wall, fence or other support with loose, well-fertilized, drained soil. Culture develops better in the open sun, but can tolerate light partial shade. At first, until the young shoots are intertwined, they are tied to pegs, later the vine does not require supports, rising along the surfaces due to its tenacious tendrils.

The powerful and rapid growth characteristic of a flower requires a large amount of water and nutrients. The plant needs regular watering, especially plentiful in dry hot weather, while waterlogging and stagnant moisture should be avoided, which can provoke fungal diseases of the root system. Liana quickly gains vegetative mass and blooms only with weekly top dressing, which begins even during the cultivation of seedlings in closed ground. The culture is fed alternately with organic and mineral fertilizers, while at the beginning of growth the bush requires mainly nitrogen, and from the end of June, closer to the flowering period, phosphorus, potassium and trace elements. With an excess of nitrogen fertilizers during this period, the bush will continue to grow foliage to the detriment of flowering. It is interesting that the acidity of the soil can affect the color of the flowers, the more acidic it is, the more red pigment in the colors, in the presence of lime in the soil, blue tones prevail.

The soil in the trunk circles should always be slightly moist, so it is recommended to mulch them using sawdust, peat or other organic material.

Kobeya is often affected by garden pests, especially aphids and spider mites, it must be regularly inspected, and, if necessary, treated with insecticides in time.

Since it is quite easy to grow a kobe from seeds, in a temperate zone the plant is bred mainly as an annual. Meanwhile, some flower growers practice a perennial culture of vines. Despite the fact that the large size of the bush and poor survival after transplantation make overwintering quite difficult, it significantly accelerates the onset of flowering and increases its intensity. In order to preserve the plant in the winter, in the month of October it is completely cut off, carefully dug out, trying not to damage the fragile root system, and moved to a container that is kept in a dark, cool (8-10 ° C) room, best of all in the cellar . During this period, kobeya does not need care, it is only necessary to moisten the soil from time to time so that the roots do not dry out. With the onset of spring, the flower is transferred to a lighted and warm place, watering is increased. They are usually planted in the ground in late spring, when the threat of frost has passed. Further care is the same as for an annual crop.

The culture is usually propagated by seeds, using a seedling method, less often vegetatively, by cuttings.

When growing kobei from seeds, planting is carried out in February-March. Seeds, especially if they have been stored for a long time, germinate with difficulty; to speed up the process, they are recommended to germinate first. Individual seeds are placed in a damp cloth or toilet paper moistened with a weak solution of potassium permanganate, laid out so that they do not touch each other, and wrapped in a plastic bag. Germination is carried out in the light in a warm room, 20 ° C and above. For the appearance of sprouts, it may take from two to three weeks, when mold forms, the seeds are washed with potassium permanganate, and the cloth or paper is replaced. The hatched seeds are planted in loose nutrient soil, laying horizontally, flat side down, to a depth of 1–1.5 cm. They dive after the appearance of the first true leaf, or, since the seedlings do not tolerate transplanting well, each seed is placed in a separate pot. Young plants are watered, fed regularly, if necessary, pegs or cords are used for support. As the bushes grow, they are transferred to a larger bowl, trying not to damage the earthen ball. Seedlings of kobei are characterized by intensive development, they are strongly stretched, for better tillering it is necessary to pinch them several times, forming a lush branched crown, which in the future will significantly improve the decorative qualities of the flower. Young vines are planted in the ground at the beginning of summer, placing them at a distance of 70-90 cm from each other.

If you need to get more powerful and early flowering specimens, the seeds can be sown in July, and the seedlings can be left for the winter in cold, bright greenhouses at a temperature of about 8-10 ° C.

For vegetative propagation, cuttings are used, which are obtained from overwintered mother bushes. Lianas, transferred in the spring to a bright and warm place, begin to sprout young shoots, some of which can be harvested as cuttings. They are carefully cut off and planted for rooting in wet sand. Young plants that have begun to grow are transferred to open ground after the onset of sustained heat.

Note that vines grown from cuttings bloom faster than those obtained from seeds, but the latter bloom more effectively.