Anthurium (Antkurium) is an evergreen herbaceous or climbing plant with leathery leaves of various shapes and spectacular “flowers” consisting of an inflorescence-cob and a waxy sheet enveloping it. The color, shape and texture of both the cob itself and the bracts are very diverse. Anthurium indoor flower retains beauty and freshness for a long time, not only in potted culture, but also in cut.

The genus unites more than 700 species of epiphytes, lianas and terrestrial herbaceous plants distributed in the tropical zone of the New World. There are currently approximately 28 species and more than 77 horticultural hybrids in the global commercial assortment. All this diversity is combined into three groups: flowering anthuriums, species with a beautiful color pattern on the leaves and a short climbing stem, species with dissected green leaves and tall shoots.

“Flamingo flower” Anthurium is called by fans for its beauty and graceful shape. 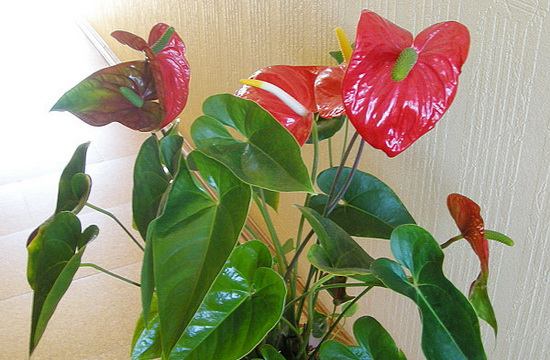 As you can see in the photo, the “flamingo flower” is comparable to the grace of this beautiful pink bird.

The name consists of two Greek words: anthos – “flower” and yre – “tail”; in Russian literature on floriculture of the 19th century. anthurium was called – “tail flower”.

Anthuriums, belonging to the group of flowering flowers, can be used not only for decorating the interior, but also for cutting flowers.

Cut flowers keep fresh for about a month.

The flowering species of anthurium include the following forms: andre (Anthurium andreanum), scherzer (Anthurium scherzerianum), as well as hybrids derived from them.

A large number of hybrids and varieties are on sale, not only with a variety of colors of bracts, including speckled ones, but also with very different plant sizes. As you can see in the photo, the atriums can be large (about 0.5 m high) or vice versa, miniature (“Miniature Scherzer Anthuriums”) – by the time of flowering, the bush reaches a height of only 5-7 cm.

Anthurium is perfect for decorating modern interiors. It emphasizes the conciseness and harmony of the decoration of your home or office. In order for the anthurium bush to have the opportunity to “appear in all its glory”, it should be placed so that it does not come into contact with any other plants. A cut of flowers for bouquets is made when the flower cover is completely open, and the “cob” has a staminate stage, i.e. covered with pollen. Flowers cut at this stage of blooming remain fresh for up to five weeks. 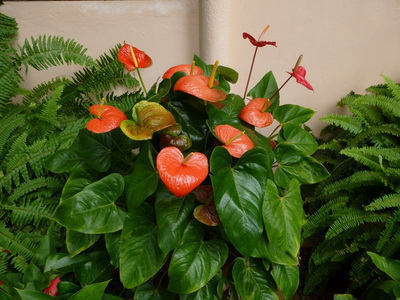 The bract (spread) is wide (up to 15-20 cm wide), folded back, has a heart-shaped shape and a glossy surface with clearly visible veins. Anthurium Andre was recently considered a greenhouse crop – varieties for indoor cultivation were bred in Holland about 15 years ago. 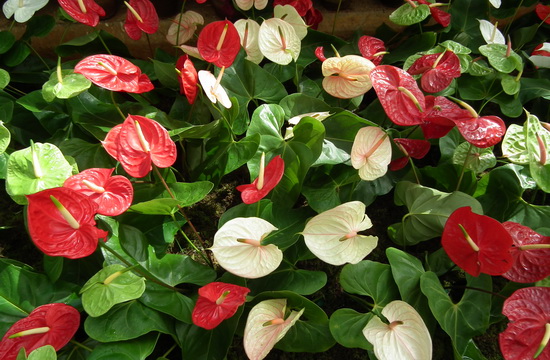 Now this species is striking in the variety and brightness of the colors of the “bedspread” – from white to all sorts of shades of red, yellow and green.

The long cob inflorescence is usually white or yellow, but there are other colors.

Anthurium Scherzer and his photo 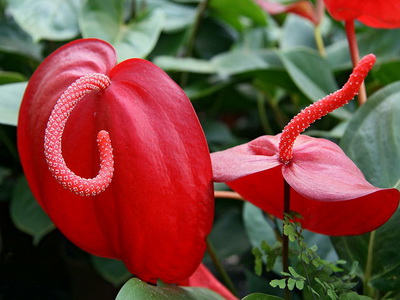 The leathery leaves of Anthurium Schrezer, the photo of which is widely presented in our photo gallery, have a matte surface, covered on both sides with small black dots. The “spread” also has a more oblong shape, and the “cob” inflorescence is twisted in a spiral.

The second group includes species such as crystal anthurium (Anthurium crystallinum) – one of the most beautiful epiphytic species, with a short shoot and large (up to 40 cm long) heart-shaped leaves. 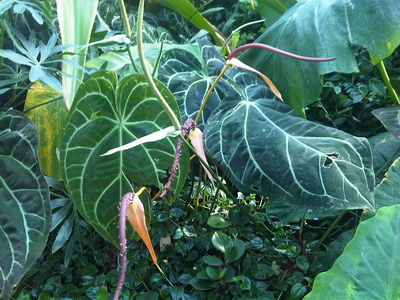 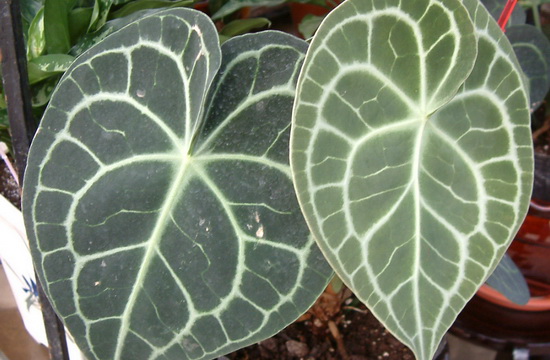 Leaves in the photo

The leaves look very impressive due to the silvery pattern with a crystal sheen, formed by veins on a velvety dark green background of the leaf plate; majestic anthurium (Anthurium magnificum) – decorative due to powerful leaves with white veins; Anthurium clarinervium – the beauty of its patterned leaves is complemented by discreet, but original flowers with a greenish “veil” and a pale purple “cob”. 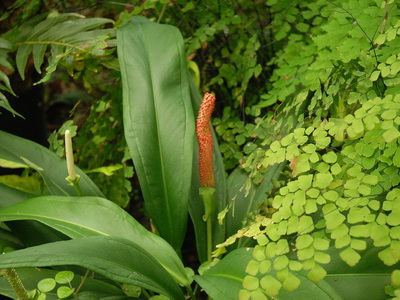 Peduncles in these species are short, bracts are small and dim (pale yellowish-greenish), but the inflorescences of the “cob” are large, with bright berries formed after flowering.

Anthurium is not an easy plant to grow indoors. The most unpretentious varieties of Anthurium Scherzer, but they will develop better if they are provided with good lighting, especially in winter.

It is best to place the anthuriums on the south or west window, preferably with additional lighting. In summer, it is necessary to provide a light shade. To ensure abundant flowering when caring for aturium at home, a winter temperature drop to +15 ° C is necessary (except for crystal anthurium – this species is afraid of falling even below +18 ° C). Dangerous for plants and drafts. It is easier than other species to bloom and climbing anthurium grows fastest of all.

Anthuriums have special requirements for watering and spraying: it should be watered abundantly in summer, a little less in winter, preventing the earthen clod from completely drying out. Water should be well settled or artificially softened, as the roots react very painfully to the slightest deposits of lime.

For the same reason, a plastic or glazed pot should be taken for planting (so that salts do not deposit on the inner surface of the walls). You can spray plants only from a small sprayer, but it is better to use special air humidifiers. The faded inflorescences of Andre and Scherzer Anthuriums are cut off immediately after flowering so that they do not set seeds and weaken the plant.

Top dressing is carried out from March to September twice a month. Transplanted every 2 years, be sure to form a good drainage layer (approximately % of the pot volume). Anthuriums can be propagated by rooting apical cuttings in wet sand and by separating lateral shoots with aerial roots. To stimulate the formation of such shoots, the base of the stem of an adult plant is covered with sphagnum moss. It can also be propagated by seeds, but in this case, varietal plants may lose specific features.

The name bonsai, which came to us from Japan, consists of...
Read more