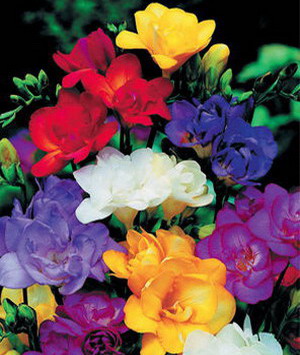 Description: This group consists of 19 graceful, deciduous perennial corms. They belong to the iris family, and in the spring they form wonderfully fragrant flowers. Freesias are great for growing in borders and containers in the garden, as well as indoors. They reach a height of 30 to 45 cm.

Temperature regime: these flowers can be grown in the garden throughout the year. The most important thing is that the temperature does not fall below -6°C, summers are dry and winters are cool and wet. Hot, humid summers are not suitable for these plants, and in such a climate the flower will not grow well. Freesia, which is easy to grow, grows well at daytime temperatures of 15-21°C and at night temperatures of 10-15°C. If the climate of your region is hot, then in summer the freesias will be in a dormant state. In areas where summers are cool and humid, corms should be dug up and stored at 25-30°C for at least three months.

Lighting: full sun. When growing indoors, take care of good lighting. Very often this becomes a problem, and the flower does not grow as we would like.

Soil Type: Freesia is easy to care for and requires a well-drained, sandy soil.

Watering: during intensive growth and flowering, watering should be regular. Most importantly, do not water the plant too much.

Fertilizers: during the period of active growth, you can apply top dressing.

Propagation: You can separate branches and plant them. Freesia is also reproduced by planting seeds. They should be planted in spring or early summer in well-sifted pots. Seeds do not need to be buried deep. Keep the pots in a warm place, and you can cover them with glass until the first shoots appear. 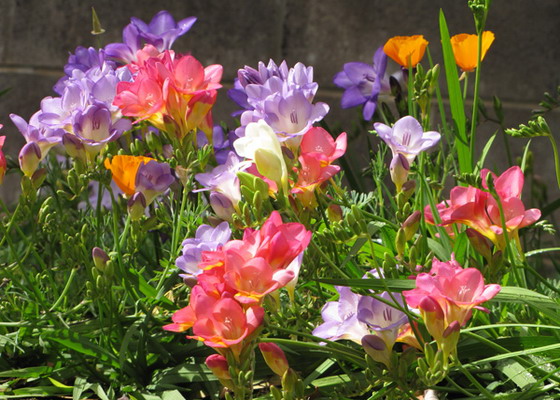 Freesia in the photo during the flowering period.

Flowering: Sweet-smelling flowers come in a variety of hues such as golden, orange, pink, white, purple, and blue. In some species, the flowers have a double shade, and there are also varieties whose flowers are double. After cutting, they do not fade for a week.

Freesia: how to plant?

If you live in the southern region, then plant the corms in the fall, and if you live in the northern region, then in the spring. The planting depth should be about 12 cm, and the distance between plants should be about 3-5 cm. They will begin to bloom after 10-12 weeks after planting. Freesia planted in containers should be planted to a depth of 3 cm. 6 to 8 corms can be planted in a 15 cm pot.

Application: used for planting in beds and containers. White freesia is very popular with many gardeners and looks great in borders. Most species are of particular value as cut flowers. 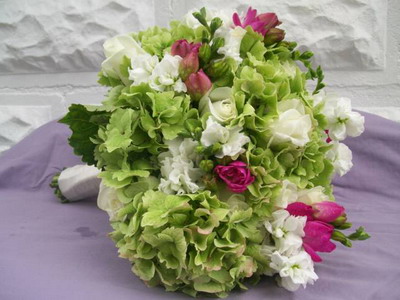 Extra: These flowers tend to spread out, so you can space them close together and attach them to some kind of support. After flowering is over, do not touch the foliage of the plant, and also store the flower in a sunny location and water. Thus, the foliage accumulates the necessary nutrients so that the next year the plant blooms profusely and spectacularly. Remove foliage only when it turns yellow and dies. If you are growing corms at home, then place the pot of flowering plants in a cool room, so they will bloom longer.

This species forms flowers of various shades, they are often two-colored, and in diameter they reach about 7 cm. Terry freesia grows in height from 45 to 60 cm. It is mainly used for cutting. 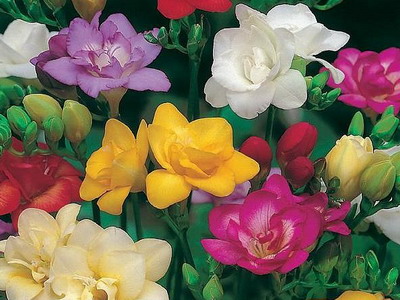 It is a hardy variety that grows well in dry climates. Freesia hybrid has different shades of colors, including purple, pink, red and white. 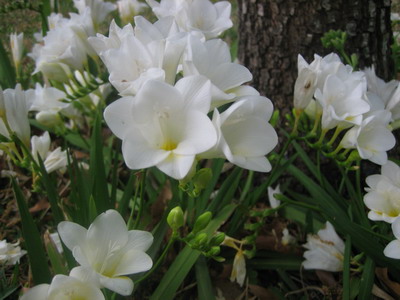 For a long time, the rose has been considered the queen...
Read more