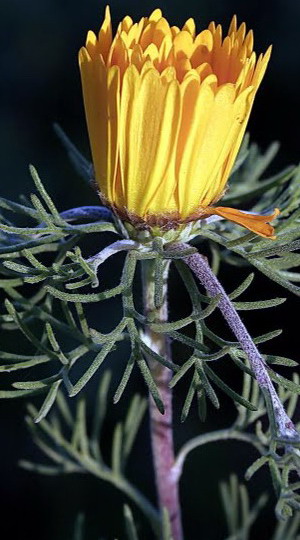 Cladanthus (Cladanthus) is a small genus of herbaceous annuals, the natural habitat of which is the western part of the Mediterranean. In floriculture, one of the species is used as a beautifully flowering pot and horticultural crop .

Cladanthus flower and his photo

At the ends of the shoots on ascending pedicels, large, in decorative species reaching a diameter of 6 cm, inflorescences-baskets, consisting of one row of flat reed and many tubular flowers located in the center, bloom. 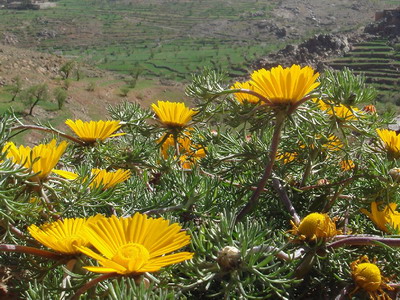 Each basket is surrounded by an openwork bract that forms an elegant collar. Inflorescences, bright yellow in bloom and dark red or bronze-brown in buds, appear 1.5 – 2 months after sowing, bushes bloom for three months or more, in the middle lane usually until frost. Cladanthus flowers, like its leaves, have a delicate pleasant aroma. Seeds are very small in size, up to 6000 pieces can be contained in 1 g, therefore, despite the cold resistance of the culture, it is preferable to grow it through seedlings.

The name of the plant is translated from Greek as “a flower on the branches”, and reflects its original appearance. The stem of the cladanthus begins to branch at the very base, forming up to two dozen shoots of the first order, on which, in turn, numerous branches of the second and even third order are formed. An inflorescence blooms on each shoot, then 4-5 new branches form under it, also ending in a flower, as a result of which up to 100 bright baskets can be counted on an adult bush at the end of the season.

Only one of the species is grown in flower beds, the Arabian cladanthus, (C. arabicus), brought to European gardens from Morocco back in 1737. This cold-resistant annual that can withstand frosts down to -3 ° C is very undemanding in care, blooms profusely and for a long time, propagated by seeds that are planted directly in the ground or on seedlings. It practically does not suffer from diseases or pests, only seedlings and young plantings do not tolerate waterlogging. 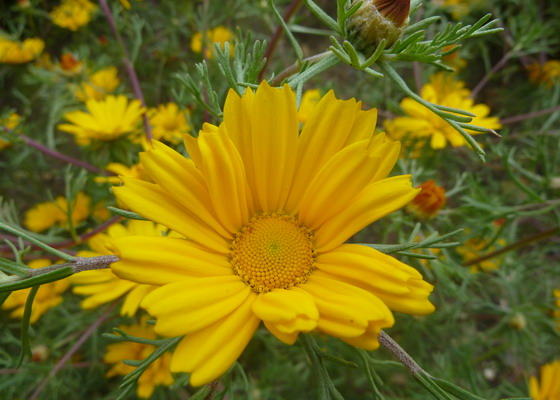 As you can see in the photo, the cladanthus is very decorative, individual bushes, due to the ability to branch widely, as they grow, take the form of a compact dense ball 30–60 cm high and up to 80 cm wide, abundantly strewn with flowers.

The culture does not need top dressing, due to its drought resistance it practically does not require watering, it is resistant to winds. Cladanthus is a flower for open sunny places with loose, well-drained soil, it is planted in ridges and borders, feels great on alpine hills and in Japanese gardens, is suitable for growing in containers and hanging planters, can be used as a pot and balcony culture. An interesting feature that greatly facilitates the care of the plant is the absence of the need to remove the inflorescences after they wither. They dry out without spoiling the appearance of the bush, and are quickly closed by newly emerging young shoots, which allows the flower to remain decorative throughout the season.

Roses: planting, care and pruning in autumn and spring

In order for a specially designated place in your garden to...
Read more

Dipladenia or Mandevilla (Dipladenia, Mandevilla) is an evergreen, beautiful and long-blooming...
Read more