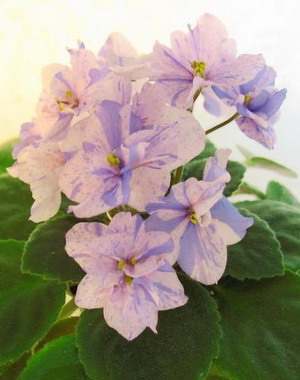 Violet was previously considered one of the favorite plants of flower growers. In the modern world, the passion for breeding and growing new varieties of this beautiful, delicate flower has truly reached its zenith. Experienced flower growers and breeders bring out more and more varieties of Saintpaulias, causing admiration and delight with another miracle. Fantasy varieties are currently the most popular. The variety of colors, the play of colors in combination with intricate strokes, dots and other patterns, truly excites the imagination and amazes.

Many, even experienced gardeners, however, when purchasing these varieties, face some difficulties. To begin with, it is worth noting that fantasy varieties of violets, ladies are extremely capricious and whimsical. For the favorable growth and development of fantasy, the correct composition of the soil, its acidity, humidity and air temperature play a huge role. Having decided to acquire Saintpaulia fantasy, it would be nice to consult a professional in this field or read the relevant literature. Many breeders give detailed descriptions and advice on cultivation, agricultural technology and other features of violets in their articles, for example, in the almanac “The World of Violets”.

There are now a great many varieties with fantasy coloring, and new ones are periodically introduced. Fantasy varieties are common among almost all groups of saintpaulias: miniature, semi-miniature, standard, trailers. Popular are:

By purchasing new varieties for your collection of violets, including fantasy, in the form of children, you can purchase a sport. Sport is called spontaneously occurring genetic abnormalities. Of the majority of babies grown from a single cutting, only a small proportion will inherit the entire gene pool of this variety, and only a few of them will be with a fantasy color. The rest are usually sports.

If you want to minimize the risk of acquiring sports, grow fantasy violets from leaf cuttings. It is better to acquire leaf cuttings from a flowering plant, with the most abundant dots, specks, strokes. Also, no less sure way is the reproduction of a fantasy by a stepson.

As a rule, the main background of a fantasy-colored flower is light, and the fantasy pattern is darker. But there are also so-called reverse fantasy, in which the opposite is true. 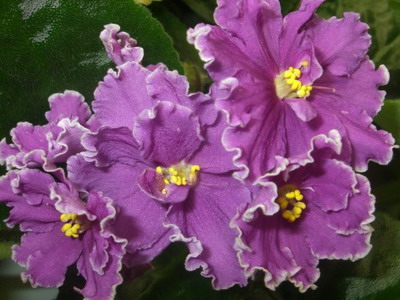 You should also pay attention to factors that affect color, such as temperature and age of the plant. Most often, at the first flowering, the color is less saturated, and the number of different strokes is negligible. You should not think that the plant is defective, you need to wait for the second or third flowering, most often by this time everything is changing for the better. It has also been observed that in winter, at lower temperatures, fantasy is formed more than during the heat of summer, when fantasy is either too weakly developed or completely absent. At the same time, you should not despair either, with the onset of normal temperature, the violet completely restores its varietal color.

If you have acquired a sport, do not rush to get rid of it, there are times when sports, growing up, acquire a kind of coloring that is not inferior in beauty to the original, and can even become a separate fantasy variety, having received an independent name. 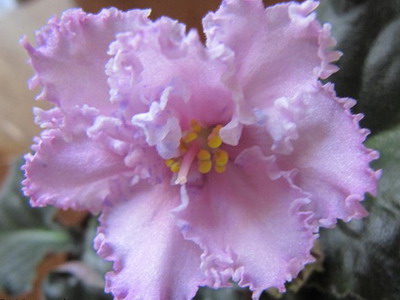 Another of the problems that flower growers face is the variability in the color of the flowers of these plants. It would seem that they took a leaf from one type of fantasy, for example, with a pink color with blue specks, they did everything right, took into account all the smallest details, and when the violet bloomed, all blue flowers turned out to be on it. And there are many such examples. In this case, it should be borne in mind that fantasy varieties are very unstable genetically and may not convey 100% of the color of the mother plant.

In any case, growing and breeding fantasy violets is a truly exciting and creative process, which, with the acquisition of experience, can also become a good type of business.