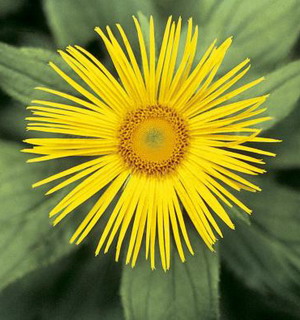 Description: how the name of the plant came about is unknown, but since ancient times, elecampane has been used as a medicinal plant. Belongs to the aster family. In total, about 200 species have been studied in science that grow in Africa, Europe, and Asia. By type, often perennial, rhizomatous, less often – biennial and annual plants, sometimes semi-shrubs. Stems are slightly branched, smooth or pubescent, straight. The shape of the leaves is large, entire-marginal or unevenly serrated, lanceolate or oblong. Inflorescences are baskets, located singly at the ends of the stems or collected in paniculate or corymbose inflorescences. Leaves are lanceolate, green. Marginal flowers are yellow or greenish-yellow. In shape – reed, rarely filiform, twice as long as the leaves of the wrapper, and the middle ones are tubular. Achenes are ribbed, cylindrical, hairy or glabrous.

Properties: inuls (elecampane) have been grown in culture for a long time, many of them are of medical value, for example, high elecampane. Recently, these plants have often been grown in flower beds in America, Asia, and Europe. New varieties are not yet known. Of particular interest are the species described below.

This type of elecampane has straight stems and large heart-shaped leaves. The leaves located at the roots are broadly lanceolate and elongated. During the flowering period, the height of the plant reaches 150-160 cm. The diameter of the flower baskets is 4-6 cm, they are collected at the end of the stems in paniculate long inflorescences, the shade is orange-yellow. Flowering time – July. The fruit is a seed. Seeds are large, without voles. 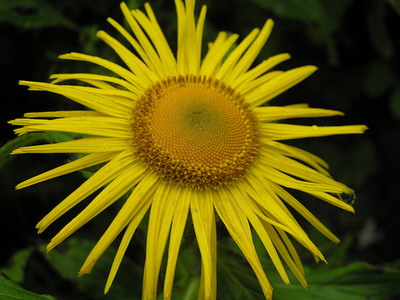 In the wild, it is found only in the subalpine belt of the Caucasus. This is a powerful, majestic, spreading plant, having a height of up to 2 m, with a furrowed thick stem. The type is perennial. The lower and basal stem leaves are quite large, elliptical-oblong, up to 50 cm long and 25 cm wide. At the base they are narrower and form a petiole 30-60 cm long. The upper foliage is sessile and noticeably smaller than the lower one. Flower baskets are up to 15 cm in diameter, on long peduncles up to 25 cm, 2-4 in rare corymbs or single. Yellow color. Blooms profusely in July-August. Seeds begin to ripen in August-September. After the plant fades, it loses its decorative effect due to the yellowing of the foliage, so it is better to cut it. 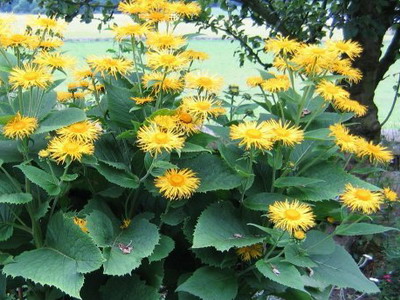 It mainly grows in light pine and deciduous forests, on steppe and meadow slopes, along river banks in the Caucasus, Europe, and Siberia. 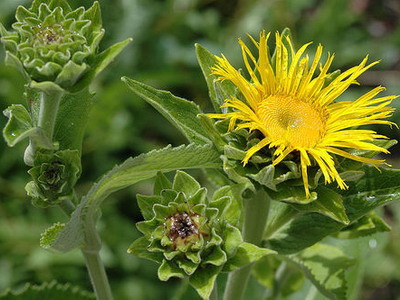 The type of plant is perennial. A distinctive feature is the formation of a cylindrical bush with a height of up to 2.5 m. The powerful rhizome has a pronounced smell. The lower stem and basal leaves are oblong-elliptical, large. The width is about 15-20 cm, and the length is 40-50 cm. Starting from the middle of the stem, the foliage is sessile. The bases are heart-shaped, stalk-bearing. Baskets are up to 8 cm in diameter and golden yellow. They are located on short thick peduncles in the axils of bracts, sometimes collected in brushes. The flowering period is July-August. Flowering time – 30-35 days. Seeds ripen from August to September.

Soil Type: Nutritious soil is needed, which should be deeply worked and moistened before planting. The only exception is the sword-leaved species, which is planted on well-drained, dry, alkaline soils, and acidic soils must be limed before planting.

Care: elecampane grows very slowly, so it does not require frequent transplants and divisions. Elecampanes are plants that respond well to various organic fertilizers, especially manure. To retain moisture in the soil, plantings should be mulched. Wood chips are preferred, but grass clippings and shavings can also be used. Elecampane of the magnificent must be tied up, as its heavy shoots, strewn with flowers, begin to bend down to the ground. When the shrub fades, the shoots should be cut off, as they spoil the appearance of the plant due to rapid drying. They are characterized by increased winter hardiness and drought resistance.

Reproduction: carried out by planting seeds or dividing the bush. Sowing seeds is done in autumn or spring. Transplantation and division of elecampane should be carried out during the period of foliage growth, in the spring. The part of the rhizome with a renewal bud is a delenka. Planting is possible in August, after flowering. In this case, in large species, it is necessary to cut the stems and basal leaves at a height of 10-15 cm from the soil. It is recommended to wash the rhizome before dividing.

Application: elecampane, the properties of which are described above, looks great in group or single plantings, on the banks of a pond or on a lawn. Elecampane magnificent is able to form a sprawling tall bush, which is completely covered with yellow daisies. It will go well with ground-blooded flowers. If you use it in group plantings, then the flower will serve as an excellent background for lower plants, such as hostas, hellebore, kupena, forest geraniums, astilbes. Elecampane is distinguished by its ease of cultivation and longevity.

Tall species of elecampane look good on the banks of large reservoirs, in mixed plantings near buzulnik, Volzhanka, cornflower, large-sized ornamental grasses, as well as against the background of shrubs. Lower species look great near small streams, next to Tradescantia virginiana, daylilies, cuff.

Hesperis, hesperis (Hesperis) - a genus of perennial herbs of the...
Read more

Interior decoration of the apartment with indoor plants

It is perhaps difficult to find an apartment in which at...
Read more