Cultivation of castor beans: from planting to care 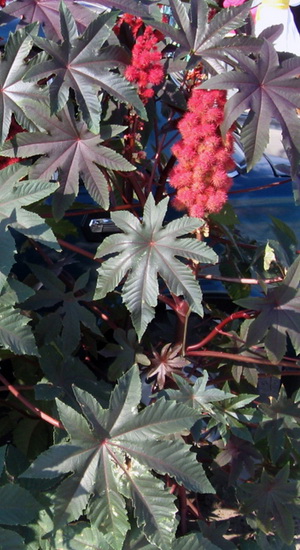 In our country, due to the exceptional thermophilicity of castor oil, its cultivation is possible only as an annual, but even in one year of vegetation, this intensively growing culture forms an attractive, densely leafy bush, and under certain conditions it even blooms and bears fruit. Exotic appearance, large size and beautiful openwork foliage contribute to its popularity as an ornamental plant. In our gardens, you can most often find red castor beans, the cultivation of which does not cause any particular difficulties, and the bright color of the trunks and leaves makes the bush attractive, regardless of the presence of flowers or fruits.

How to grow castor beans: preparation for sowing

When choosing a place for planting castor beans, you need to consider its southern origin. The culture prefers sunny, wind-protected areas, with a lack of lighting it stretches and breaks easily, blooms late, not having time to form seeds, or does not bloom at all. The plant develops quickly, in one season it can reach a height of 1.5 – 2 m, and under favorable conditions even 3 m, therefore it needs loose, deeply cultivated, nutrient-rich soil, preferably black earth or gray soil. Heavy clay, sandy, waterlogged soils are not suitable for her. For intensive growth, the culture requires a large amount of moisture, therefore, it needs regular watering, especially plentiful in drought conditions. With insufficient moisture, the bush can shed not only flowers and fruits, but even leaves. Castor bean is very responsive to fertilizers, which are best applied in the period before flowering. Prefers organic top dressing (manure, droppings), however, mineral fertilizers (ammonium nitrate and superphosphate) can also be used. Weeding and loosening are required only at the beginning of the growing season, in the future, powerful plants drown out the weeds themselves.

Planting and propagation of castor beans

The culture does not tolerate frost at all, it reacts poorly to a prolonged drop in temperature, therefore, in the middle lane, where the duration of the period of high air temperatures is relatively short, it is grown exclusively through seedlings. In the southern regions of our country, it is possible to sow castor beans directly into the ground.

The difficulties of reproduction include low germination of seeds and a long time for their germination. Without pre-sowing treatment, the first sprouts may appear only after 2 – 3 weeks. To speed up the germination process, it is recommended to scarify the seeds, that is, mechanically disrupt the integrity of the hard shell, for example, by slightly rubbing it with sandpaper, and then soak the treated seed in any phytohormone (epin, heteroauxin, etc.) overnight.

When growing castor seedlings at home, the beginning of April is considered the optimal sowing time. The plants planted at this time develop rapidly, but do not outgrow, in the open field they manage to form powerful bushes, bloom, and in warm autumn conditions, you can even get ripe fruits from them.

Since it is not always possible to grow castor beans with viable seeds in the conditions of the middle lane, they usually have to be purchased at the store for propagation. For planting, use containers with a diameter of at least 20 cm, half filled with loose nutrient soil, in which one seed is planted, each deepening 1-2 cm into the ground. Until the sprouts appear, the pots are kept at a temperature not lower than +15 ° C. If the planting material has been pre-treated, seedlings may appear in 2-3 days. Unfolding cotyledons often leave a thin, sticky peel, which is best removed to avoid rotting of the growing point. The film is removed carefully, trying not to damage the young leaves; to facilitate the process, it can be pre-wetted, for example, using a sprayer.

Castor seedlings grow very quickly and begin to elongate even before the first true leaf appears. To get strong, stocky seedlings, young plants are immediately placed in a bright, cool place, as the stems grow, soil is gradually added to half-filled containers, which contributes to the formation of lateral roots. The bushes are transferred to the garden after the threat of return frosts has passed. For better survival, it is recommended to avoid damaging or exposing the root system, therefore, so that the earthen ball does not crumble during transplantation, the seedlings are preliminarily watered abundantly. It is very convenient to use peat pots as containers for seedlings; they can be planted directly into the ground without transshipment, without injuring the root system of young plants.

Cactus hymnocalycium (Hymnocalicyum) - one of the first spherical cacti in...
Read more